Join this spectacular 2-Day tour hunting down the elusive Northern Lights, as well as paying a visit to some of the most beloved visitor attractions in Iceland, including those along the Golden Circle and South Coast sightseeing routes.

Your first day focuses on the three major attractions of the world-famous Golden Circle sightseeing route; Þingvellir National Park (Iceland's only UNESCO World Heritage site), Haukadalur geothermal valley and (home to the hot springs, Geysir and Strokkur) and, finally, Gullfoss, "the Golden Falls". Once your time on the Golden Circle has come to a close, you will be transported to your accommodation for the night, a cosy little house complete with relaxing hot pool.

If the Northern Lights aren't immediately visible from the hot tub, and the sky looks clear, then you will proceed to go on a Northern Lights trip, keeping your eyes peeled on the dark night sky, waiting on the dancing green and red waves to erupt over the starlight.

Your second day of this tour will see you discovering the major sights along the South Coast, including the waterfalls Seljalandsfoss and Skógafoss, Reynisfjara black-sand beach and Dyrhólaey Peninsula. For those adventurous few, a hike can be undertaken on the nearby Sólheimajökull Glacier at added cost, providing for even more adventure on this otherwise thrilling trip. Of course, Northern Lights hunting will once again be undertaken should the conditions be right.

So don't delay any longer! Hurry now to secure your place on this exciting tour, perfectly balancing major sightseeing with the chance to see the gorgeous Northern Lights. Check availability by choosing a date. 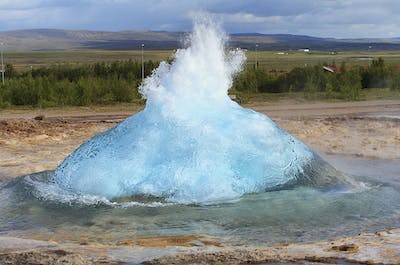 Day 1 - The Northern Lights & The Golden Circle - Your Way

Beginning with the famous Golden Circle tour, you will be picked up from the airport or your accommodation in Reykjavík and driven roughly one hour to your first stop of the day, Haukadalur geothermal valley, home to the hot springs, Strokkur and Geysir.

Geysir, of course, lent its name to geysers across the world, but now lies dormant, in stark comparison to its cousin, Strokkur, which will routinely erupt every five to ten minutes, making for a fantastic photograph. Besides the hot springs themselves, visitors to the valley can also look upon steaming fumaroles, volcanic vents and bubbling hot pools.

From there, you will be heading to Gullfoss, one of Iceland's most beautiful and dramatic attractions. Water from the Hvítá river plummets 32 metres over two cragged "steps", falling majestically into the narrow, dark canyon below. On sunny days, it is possible to see rainbows forming in the upswelling mist, thus complimenting any photographs taken at this attraction.

After these brilliant sights, you will go to Friðheimar farm for lunch. The theme of Friðheimar´s cuisine is tomatoes, in many different forms, not surprising as four different varieties of tomato are cultivated in the farm's adjacent greenhouses. This is truly an organic and classy culinary experience.

Next, you will make a passing visit to an old power plant called Ljósafossvirkjun and, from there, to another plant called Nesjavellir, the latter of which boasts a stunning view over the last stop of the day, Þingvellir National Park.

Thingvellir national park is a site of historical, cultural, and geological importance. It is the site of a rift valley that marks the crest of the Mid-Atlantic Ridge, and is also home to one of the largest lakes in Iceland, Þingvallavatn. Þingvellir is a UNESCO World Heritage Site and a special place to all Icelanders, given its important role in developing the nation.

From there, you'll head to your private accommodation, a cosy little house in the heart of the Golden Circle, for a nice meal and a dip in the hot tub. If conditions are right, you will embark on a Northern Lights hunt that night. 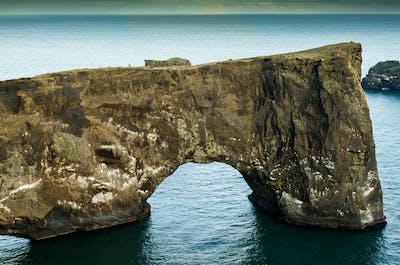 Day 2 - The Beautiful South - A Glimpse of Iceland

The first stop of your second day is the picturesque Seljalandsfoss waterfall where you will have the opportunity to ﻿ walk behind the cascade, thus observing it from a number of different angles. Next up is one of the biggest waterfalls in the country, Skógafoss, with a width of 25 meters and a drop of 60 meters. Due to the amount of spray the waterfall consistently produces, a single or double rainbow is normally visible on sunny days, making for fabulous photographs.

An optional glacier walk is available on the glacier snout, Sólheimajökull, the southwestern outlet of the Mýrdalsjökull icecap. Though an added expense, this is seriously an experience not soon forgotten given the glorious open white expanse of the glacier, its intricate ice sculptures and incredible panoramic views.

Close by is the small peninsula, Dyrhólaey. Formerly an island of volcanic origin, this peninsula is now securely fastened ashore and provides absolutely spectacular views of the surrounding area, be it Mýrdalsjökull glacier or the black lava columns of the Reynisdrangar.

You will also see the Dyrhólaey arch, through which it is possible to sail, and even fly. Dyrhólaey is also rich with bird life, including species such as fulmar, guillemot, and if lucky, even nesting puffins. From there, you will head down to the famous black-sand beach, Reynisfjara, known for its basalt rock columns and dangerous sleeper waves.

As the evening progresses and the tour comes to a close, you will once again have the opportunity to embark on a Northern Lights in the near area.

The accommodation on this trip is privately owned. You will not meet any tourists during your stay at this location. We might alter the plan as we go along, depending on your interests as we are not bound by hotels or other people traveling with us. This is a private tour. The weather in Iceland is unpredictable so pack wisely and come prepared. We recommend bringing a warm base layer, a breathable mid layer and finally a wind & waterproof outer layer to protect you from the elements. Otherwise we trust you good judgement. On this tour you are not staying in a busy hotel so be prepared for some quality time with your friends and family.