Discover the best of Iceland over four days with this immersive adventure that includes a complimentary glacier hike, lava cave exploration, and admission to the Secret Lagoon. Those eager to see the country’s most famous attractions without missing out on any activities will find this to be a great way to spend their vacation.

On this epic journey, you will get to see the Snaefellsnes Peninsula, a region so diverse that it has the moniker ‘Iceland in Miniature.’ The Golden Circle is next. It’s the most popular sightseeing route in the country. The South Coast is a shoreline with so many attractions that you’ll spend two days immersing yourself in its wonders.

For three nights, you’ll stay at several beautiful examples of Iceland’s rural accommodations, at hotels and guesthouses that will provide you with a local breakfast. Meanwhile, you’ll be traveling each day in a comfortable bus that boasts modern features such as Wifi.

Your guide is not only there to drive you from location to location but is an expert on the regions you will visit, thus providing a wealth of information on their history and culture. Furthermore, those who take you caving and glacier hiking are specially trained to do so safely and provide you with all the equipment needed.

This tour is conducted in both summer and winter. It can provide one of two unique experiences. In summer, your hours of sightseeing will be extended due to the Midnight Sun, and you’ll likely see more wildlife such as seabirds on your travel. In winter, meanwhile, you have an excellent opportunity to see the Northern Lights each time you retire and can see the sites swatched in their Arctic colors.

Make the most of the best sites in Iceland and combine your travels with adventure and geothermal bathing by booking this four-day excursion. Check availability by choosing a date.

Pick-up and drop off in Reykjavik
Accommodation
Breakfast
Glacier hike 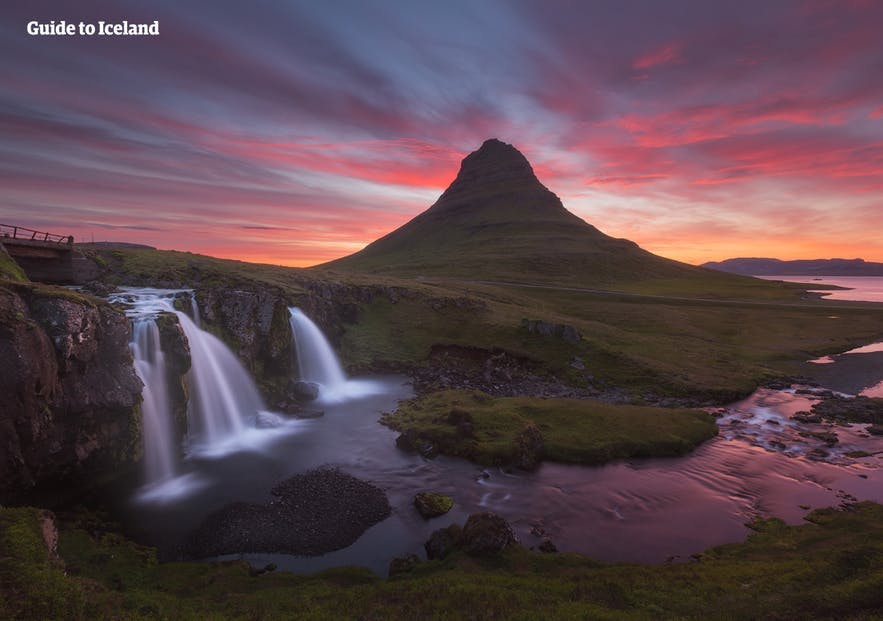 On your first day, your guide will pick you up in Reykjavik, introduce you to your fellow giddy travelers, then take you on a journey north towards the Snaefellesnes Peninsula. Also named ‘Iceland in Miniature’, you have a wealth of attractions to cover today, and will be pleased you don’t have to rush any to race back to the capital in the evening.

First up is Berserkjarhraun, one of the country’s most dramatic lava fields. Like with most sites in Iceland, the folklore here is as interesting as the nature; the story of the creation of the road across it is one that involves Viking berserkers, betrayal, and murder.

Next, you’ll reach Kirkjufell, which Game of Thrones fans will immediately recognize as the fateful ‘mountain shaped like an arrowhead’. Even those who have never seen the show, however, will appreciate its beautiful scale, unique formation, and the way in which it stands alone, next to a waterfall, surrounded by idyllic coastline.

You will then drive past some beautiful craters, mountains, and shores before entering Snaefellsjokull National Park, a reserve centered around a magnificent twin-peaked subglacial volcano of the same name. This feature will be your traveling companion as you marvel over some other sites in the park, most notably the beach of Djupalonssandur and the village of Arnarstapi.

While in Snaefellsjokull, you will also embark on a caving adventure into the depths of Vatnshellir. With an age of 8,000 years, fascinating geological formations, and incredible ice sculptures at all times other than high summer, this is a truly magical place to explore and learn about the unique forces of volcanic eruptions. Those nervous about such an experience need not worry, as you will be provided with safety equipment and the lava tube is rather large.

After your adventure, you’ll move out of the national park, and along the peninsula's southern shore. From the bus, you can marvel at sites such as Londrangar, a basalt sea stack with many bird colonies; Raudfeldsgja, a gorge in a mountainside; and Gerduberg, a cliff with hexagonal basalt columns. Your last major stops, however, will be Budir and Ytri Tunga.

The former is a minuscule hamlet with a captivating sense of abandonment, centered around an iconic black church. The latter is a seal-watching beach with a year-round colony, perfect for animal lovers hoping to enjoy Iceland’s wildlife.

After a full day of incredible exploration, you’ll be driven to your hotel for the night. 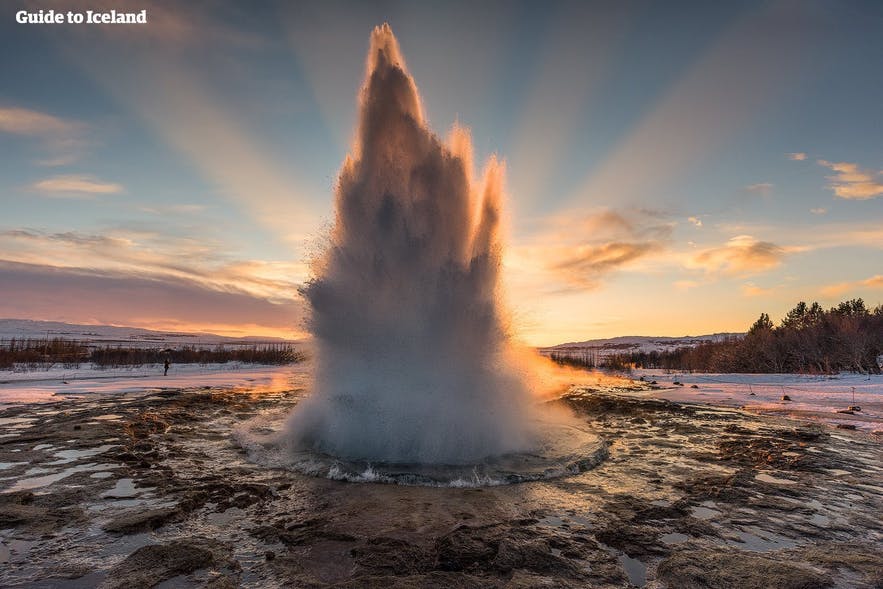 On the second day of your trip seeking out the best of Iceland, you’ll tour the iconic sites of the Golden Circe - with the additional attractions of Kerid Crater Lake and the Secret Lagoon.

After breakfast, you will thus head straight on to Thingvellir, a national park where Icelanders formed their first parliament. It is not just the history here that is compelling, however; it also has breathtakingly abundant forests and waterways, as well as great geological significance. On either side of the park, you can clearly see the edges of the North American and Eurasian tectonic plates, meaning your walk here will be conducted between the continents!

After exploring this gorgeous reserve, you will head to the hot spring site of Geysir. As its name suggests, this place is renowned for its geysers, most notably Strokkur, which releases water to heights exceeding 20 meters. You won’t be waiting long between eruptions as they occur every five to ten minutes, and there are plenty of other mud pools and fumaroles to admire in between.

Your guide will then escort you to one of Iceland’s most famous and dramatic waterfalls, Gullfoss. Part of the Hvita River, which boasts roots in Langjokull glacier, this stunning feature is a fantastic reflection of the beauty, power, and drama of Iceland’s nature.

While many tour operators would call the job done here, you have two more sites on your agenda. First, you’ll head to the vividly colored crater lake of Kerid, to be awed at the stark contrast between its crimson rocks and azure waters. Before moving on, you will be able to fully encircle it and walk down to the edge of the pond within.

Secondly, you will head to Iceland’s oldest swimming pool, the Secret Lagoon, for an unforgettable geothermal bathing experience. The water here is directly fed by an adjacent hot spring, guaranteeing its freshness, warmth, and high mineral content, and there is even a miniature geyser to admire on site!

After fully recharging your batteries, you’ll head to a hotel in the country’s south for another restful night. 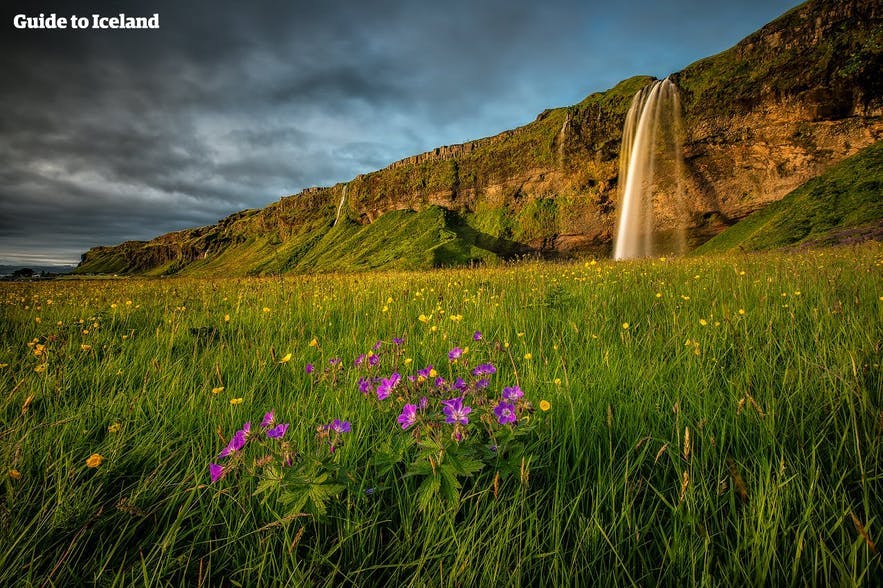 After another great breakfast on day three, you will continue your tour of the best sites in Iceland, this time by starting your adventure along the attraction-filled South Coast. The first two you will come to are both spectacular, sea-facing, 60-meter-tall waterfalls - although, in all other ways, they are rather contrasting.

Seljalandsfoss, for example, is incredibly gentle, a narrow stream cascading into a pool below. What makes it striking, however, is the vast cave that has opened behind it, allowing it to be fully encircled in summer under favorable conditions.

Skogafoss, meanwhile, is far more traditional in its formation but far more powerful in its flow; its width can be up to a third of its height after heavy rain or a rapid glacial melt!

After admiring and photographing these features, it's time for another adventure: a glacier hike. You’ll be driven to the tongue of Solheimajokull, dress in all your safety gear, and briefed, before being led up the dramatic slopes. The vivid colors and unique formations in the ice, the unbeatable views of the south, and the unearthly terrain all around you make this one of the most incredible and classically Icelandic experiences you can enjoy!

Once you have gotten to know the contours of the glacier, you’ll return to the van for the short trip to Reynisfjara. This beach is renowned for its endless plains of volcanic black sand, as well as for its unique coastal geology. Most notable are the ‘frozen trolls’ of Reynisdrangar, which stand tall out to sea in the form of two great basalt stacks.

After a walk here (being sure not to get close to the powerful sneaker waves), you’ll head to the village of Vik for refreshments before continuing towards your hotel further along the South Coast. The drive here will reveal to you some even more breathtaking sites - such as those of Vatnajokull, Europe’s largest glacier - and ensure you are close to your first attractions tomorrow so you don’t need to waste any time on the bus!

You’ll spend the third and final night at another gorgeous choice of accommodation. 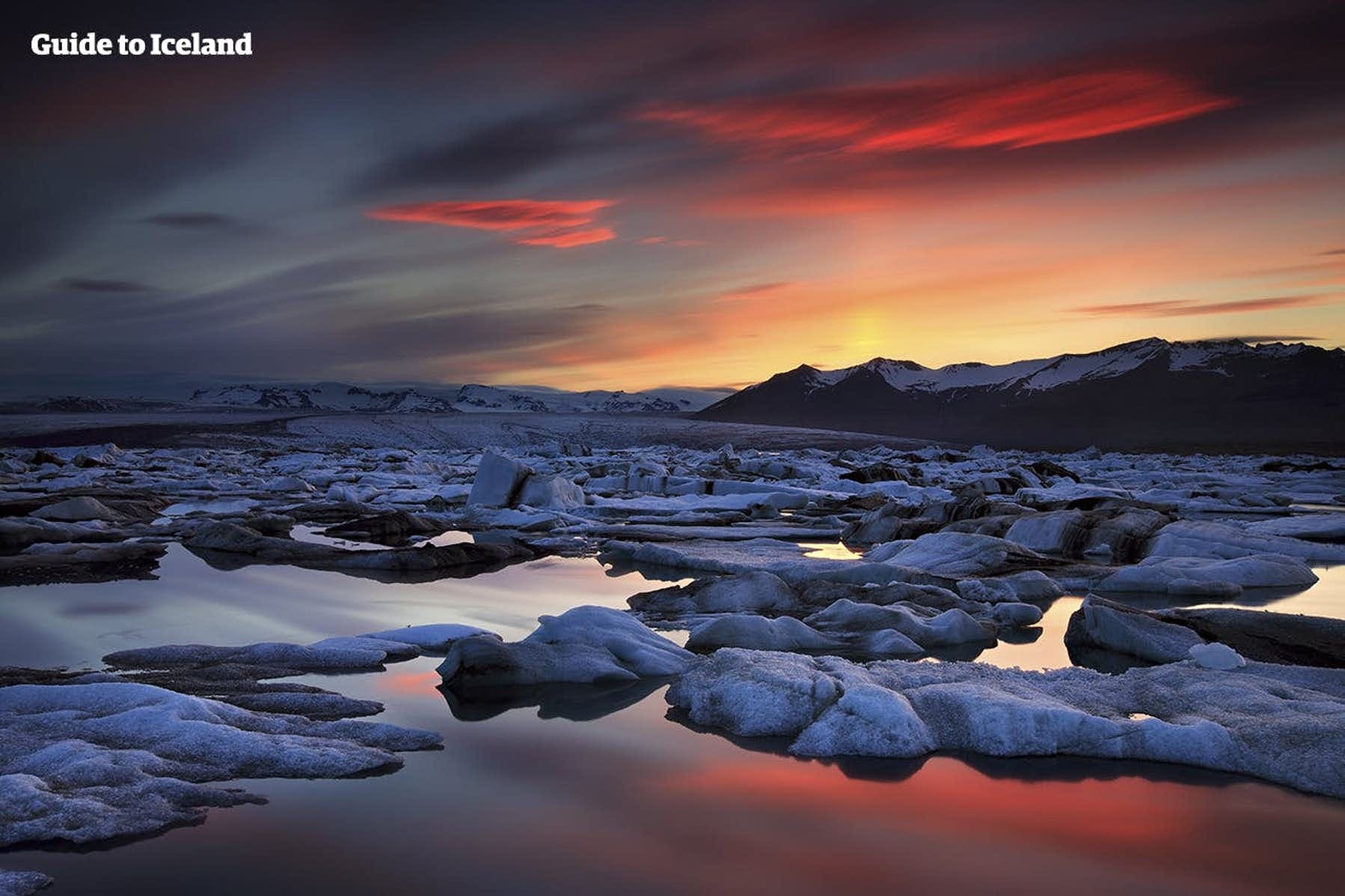 Day four may be your last day, but it is the one during which you will see the very best of Iceland. For most, this elusive concept is found at the Jokulsarlon glacier lagoon. The deepest lake in the country, and one of the largest, it separates a disintegrating glacier tongue from the ocean. As such, it is filled throughout the year with thousands upon thousands of enormous icebergs, that slowly break down as they attempt to flow through the distant, shallow channel that connects their waters to the sea.

Walking along the shores here is awe-inspiring, and not just because of the sight of the bergs; their sounds, as they turn in the water and slowly collapse, are also mesmerizing. The cherry on top of this attraction is the fact that many seals call it home, and can be seen hauling out offshore or bobbing in the waters.

Right by Jokulsarlon is the Diamond Beach, where these icebergs wash up when they finally reach the ocean. The contrasts of their white, silver and blue hues against the black sands make it clear how this place earned its name, and why it is so beloved.

Once you have made the most of these two sites, you will set off in the van for a cultural landmark, Hofskirkja Church. One of just a few authentic turf-roofed churches left in Iceland, this is a great destination for any with an interest in how Icelanders survived in the island's tough conditions for hundreds of years.

With this attraction explored in-depth, you’ll head to the dramatic lava field created by Laki during its infamous 1783/4 eruption. This event caused an ash cloud that destroyed crops, blocked ports, and poisoned humans and livestock like few other catastrophes in history.

Finally, you’ll head to Fjadrargljufur if traveling during summer, a spectacular canyon with 100-meter tall cliffs, countless waterfalls, and breathtaking greenery on and across its lava rocks. In winter, you will instead head back towards Reykjavik, making stops should there be any sign of the Northern Lights in the sky!

You’ll reach the capital in the evening, with enough time to grab a bite or drink to celebrate your journey.