Encircle Iceland in just five days and see many of its most incredible sites with this express Ring Road tour around the whole country! Those with limited time who wish to witness the wonders of the south, east, north, and west should grab their seats while availability lasts.

On this adventure from Reykjavik, you’ll have the chance to marvel over hot spring areas and fjords, waterfalls and ice caps, basalt formations, and an abundance of wildlife. Not only that, but you’ll be able to enjoy a glacier hike and a dip into the geothermal waters of the Vok Baths.

The famous Golden Circle, South Coast, Jokulsarlon glacier lagoon, Eastfjords, and the spectacular north are all on the agenda, with plenty of extra hidden gems to stop and see.

You’ll enjoy your express tour around Iceland in a modern bus that boasts free Wifi, and each night you’ll retire in a local, welcoming hotel that will provide breakfast. Your guide will be an expert on all things Iceland and will keep you both entertained and safe throughout your entire journey.

Because this tour is year-round, your experience will be quite different - but equally impressive - based on the time you take it. In summer, your longer driving days will be more enjoyable due to the ongoing light of the midnight sun illuminating the surrounding landscapes; furthermore, you have a better chance of seeing wildlife such as great whales.

In winter, meanwhile, you have an opportunity to witness the Northern Lights each evening and early morning. You will also be able to immerse yourself in a wonderland of snow and ice formations.

See all of the Ring Road in just five days with this incredible express tour around Iceland. Check availability by choosing a date. 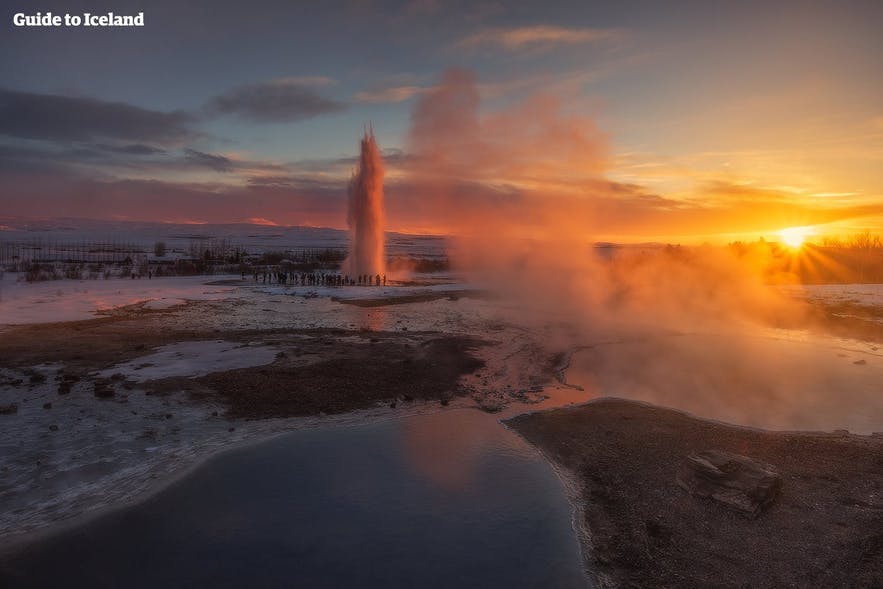 Your five-day express adventure begins in Reykjavik, where you’ll be picked up early by your experienced guide. After meeting your group, you’ll set out on the most iconic sightseeing route in the country, the Golden Circle.

This trail usually covers three sites, but you will get to experience one more as you tour around Thingvellir National Park, the Geysir Geothermal Area, Gullfoss waterfall, and finally, the lesser-known Kerid Crater Lake.

Thingvellir is a national treasure; it boasts incredible beauty, with forests, springs, lava fields, surrounding volcanoes, and fascinating geology, being situated between two dramatic tectonic plates. Its history, however, is perhaps its most significant appeal, as it was here that Icelanders convened annually for nearly a millennium to pass laws, settle disputes, and put criminals (and even ‘witches’) to trial.

Meanwhile, the Geysir Geothermal Area has geysers so dramatic that the Icelandic word for the phenomenon was adopted into English. The most striking of these is the incredibly active Strokkur, which blasts water to breathtaking heights around ten times an hour; as such, you’ll be able to see it go off several times during your amble here.

Gullfoss waterfall, or the Golden Waterfall, is the namesake of this sightseeing route, and it is little wonder as to why. Over thirty meters tall, falling into a beautiful valley, and wildly powerful, few sites in the country are as inspiring.

Finally, you’ll reach Kerid, a crater of red rock with azure waters within, the vividness of which defies belief. Your guide will allow you to walk around its circumference and down the path to the lake, allowing plenty of time for pictures.

After these great sites, you’ll head to your welcoming hotel in the south. 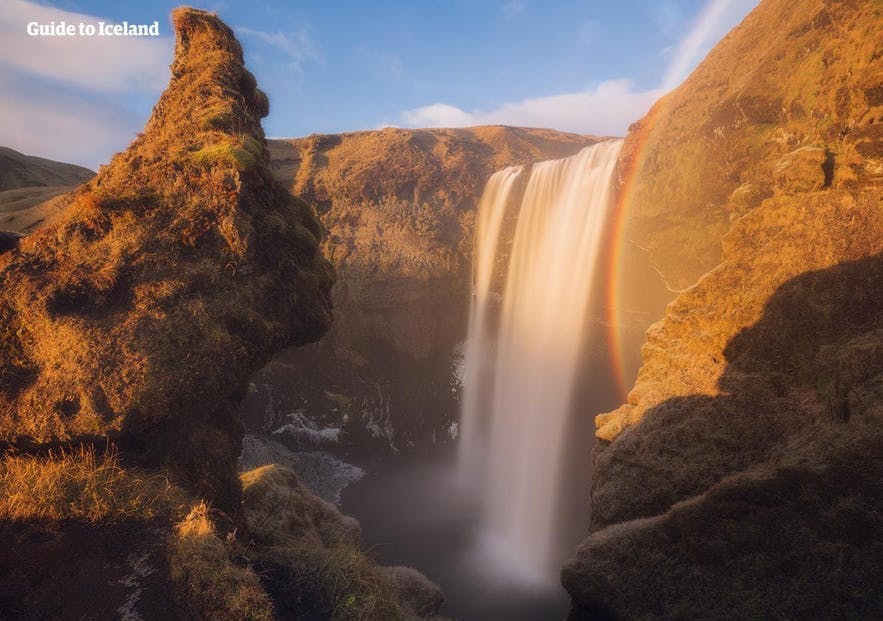 The second day of your Ring Road journey will take you across the magical South Coast of Iceland. After enjoying breakfast, you’ll set off to your first destination, Seljalandsfoss waterfall.

Cascading from a height of 60 meters, this beautiful feature is magnificent throughout the year. Its most famous quality is that guests can fully encircle it in certain conditions due to the large cave that opens behind it.

You’ll come to another waterfall next, Skogafoss. Just as tall as its neighbor, it may not have a cavern, but it is far more powerful, making it just as impressive. You can learn about the legend of a giant’s lost treasure on site after you admire and photograph its majesty.

With these two sites enjoyed, it is time for your glacier hike! You’ll embark on this adventure on the glacial tongue of Solheimajokull, at the foot of which you will dress in all the safety gear provided. You’ll then begin your breathtaking ascent, with your guide introducing you to ice walls, crevasses, ridges, and endless plains of snow.

After an exhilarating experience, you’ll continue to your next destination, the Reynisfjara black sand beach. With its offshore sea stacks that were once said to be frozen trolls, powerful sneaker waves, and towering cliffs, the nature here is as ominous as it is beautiful.

Your guide will then escort you along the South Coast to your accommodation close to the awe-inspiring sites of tomorrow. 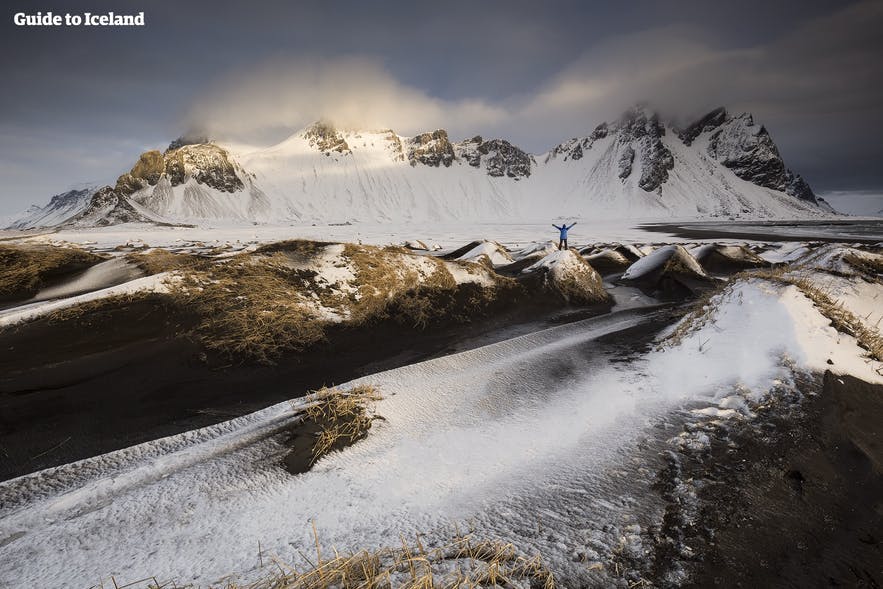 After breakfast on the third day of your journey around Iceland, you’ll spend your time marveling over the Jokulsarlon Glacier Lagoon, navigating the Eastfjords, and bathing in the Vok Baths.

Jokulsarlon is one of the most famous spots in Iceland. A feature of the incredible Vatnajokull National Park, it is a vast lake that is full throughout the year with countless icebergs of vivid colors and epic sizes. Your walk along the shore will be mesmerizing, as will your stroll along the adjacent Diamond Beach, where these icebergs finally wash up when they are small enough to reach the sea.

You’ll then start to explore the remote and distant Eastfjords, a region of towering mountains, plunging bays, and tiny fishing villages. Due to its distance from Reykjavik, few are lucky enough to explore here, but the winding roads are some of the country’s most breathtaking.

Your first stop will be Vestrahorn, a jagged mountain of gabbro rock often called ‘the Batman Peak’, followed by the charming village of Djupivogur, which is renowned for its abundant public art. This settlement sits in the shadow of another beautiful mountain, Bulandstindur, a site steeped in local folklore.

If you are traveling during summer, you’ll also make a detour to stop at the beautiful canyon of Studlagil, an oasis of azure waters and striking hexagonal basalt columns.

You’ll then continue towards your accommodation in this spectacular region, but not without an optional stop at the Vok Baths first. The only geothermal spa in the east, it is immersed in a stunning lake surrounded by mountains and has many luxurious features. 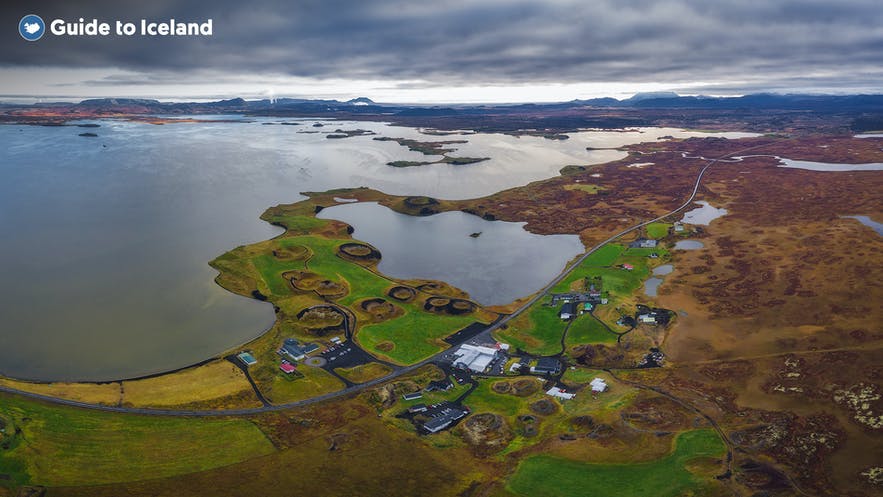 The fourth day of your five-day trip around Iceland will take you through the many dramatic sites of the geothermal, volcanic north. After a local breakfast, your first stop will be the most powerful waterfall in Europe, Dettifoss (so long as you are traveling in summer); this feature is stark, ominous, and awe-inspiring and has appeared as a backdrop in several Hollywood films.

Next, you’ll continue to the Lake Myvatn region, which is open throughout the year. Its enormous bodies of water, towering basalt formations, and rows of craters make it a spectacular place, and there are several features where you’ll stop. Hverir is a dramatic geothermal area with many smoking fumaroles; Grjotagja is a hot spring within a hidden cave; and Dimmuborgir is a massive fortress of lava rock.

You’ll continue to the geothermal power plant of Krafla to marvel over how the volcanic forces here are utilized to produce much of the country’s green energy. Following this, you’ll head to Godafoss, another beautiful waterfall with a unique history, having been the spot where Iceland symbolically converted from paganism to Christianity in 1000 AD.

With all these natural sites explored, you’ll head to a cultural one: Akureyri, the capital of the North. Before retiring at your hotel here, you’re welcome to try the restaurants and bars of Iceland’s second-largest urban area. 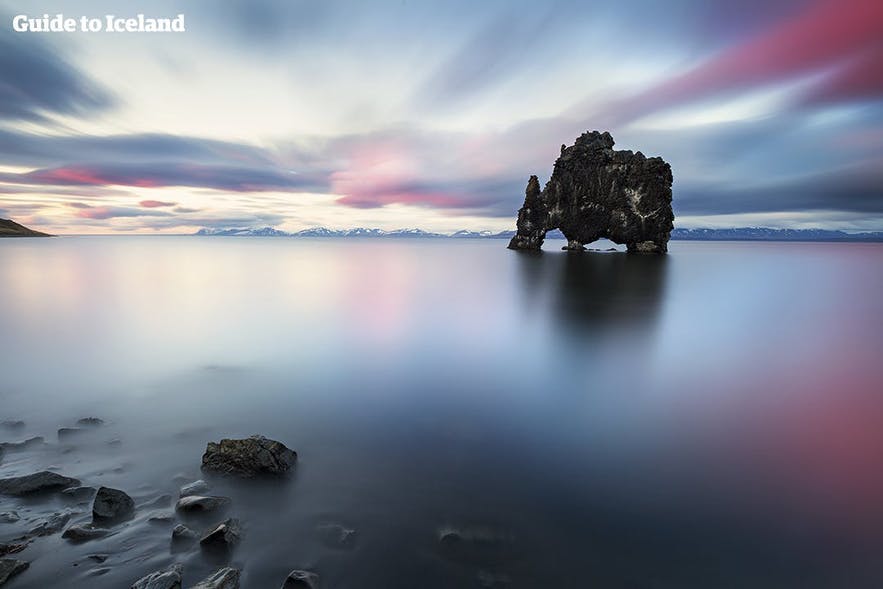 Wildlife and the West

On the final day of your five-day Ring Road journey around Iceland, you’ll make your way from Akureyri to Reykjavik; en route, however, you have some magnificent sites of the north and west to see.

First, you’ll reach the village of Dalvik, an authentic example of local fishing culture on the Trollaskagi Peninsula. The sea views here are beautiful, and it is not at all uncommon to see pods of dolphins and even great whales when strolling along the scenic harbor. As you leave Trollaskagi, you can admire the abundant Icelandic horses that call this area home.

Your next destination is also a peninsula, Vatnsnes; however, it is more famous for its many seal colonies than its whales and horses. Here, you’ll discover Hvitserkur, a photogenic rock monolith that stands just offshore in the shallows; many compare it to a drinking elephant, others to a dragon, though folklore dictates it is a petrified troll.

As you enter west Iceland, you’ll detour to the three craters created by the Grabrok volcano; you can hike to the top of the largest for some incredible panoramas of the surrounding lava fields. After this, you’ll reach the highest flowing hot spring in Europe, Deildartunghver, where you can have a final marvel at the amazing geothermal powers at work in Iceland.

Finally, you’ll return to Reykjavik, where you can reminisce over the unforgettable memories you have made in just five days!