Join this spectacular 3-day tour where you'll visit the best of Iceland; The Blue Lagoon, The Golden Circle and The South Coast. This private excursion is perfect for families, couples or a small group of friends.

Your accommodation is off the beaten path, in a beautiful private house in the midst of the Golden Circle, taking you close to the source. You'll be staying in a place close to geothermal areas with a private outdoor hot tub, enjoying fresh farm produce directly from local farms in the area - fish, meat and vegetables. That is how the locals do it; you should too.

Iceland is a large organic island where everything you need is close by. Staying in the countryside will give you more time to enjoy the magnificent natural wonders of Iceland and less time commuting to and from Reykjavík. If you are looking for peace, quiet and an authentic experience in a rural setting this tour is for you.

So don't hesitate. Book this tour now and spend three days surrounded by the breathtaking Icelandic nature. Check availability by choosing a date. 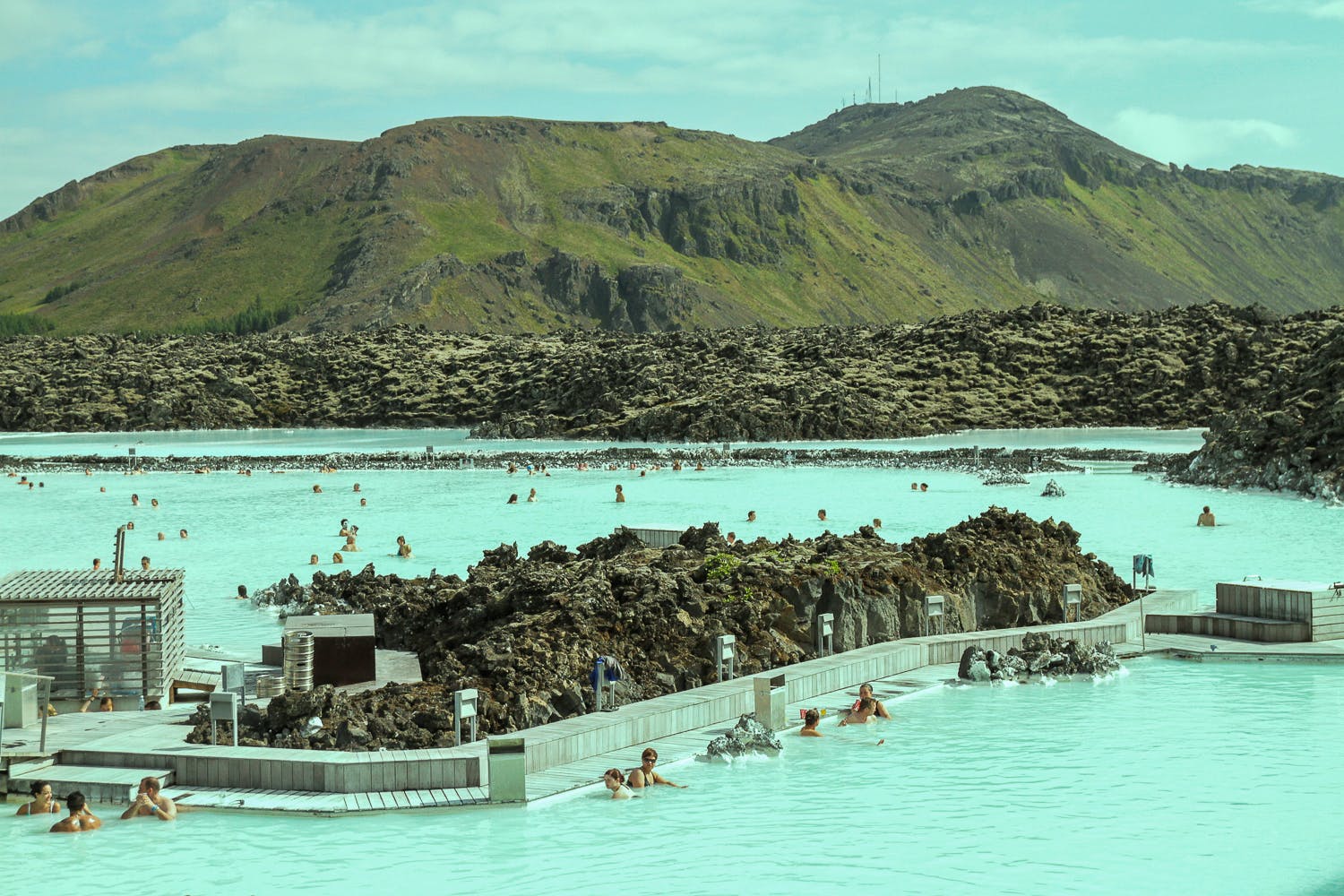 The tour starts when you are picked up and driven to the Reykjanes Peninsula, which has some of the most unique sights on earth. The peninsula is a UNESCO Global Geopark and you'll be driven through the fissure zone; a geological formation of volcanoes along the Mid-Atlantic Ridge.

In the midst of this beautiful scenery is your first stop, the Reykjanesviti lighthouse, Iceland’s oldest lighthouse built in 1878. Now a popular photo and picnic area, it is part of the geothermal region known as Gunnuhver.

Gunnuhver is a spectacular collection of mud and steam pools, and the area gets its name from the troublesome ghost Gunna. The powerful hot springs in the area bubble and roar angrily, and many hold the restless spirit of Gunna responsible.

As we continue our drive along the majestic coastline, there is an optional stop at the spa in the Blue Lagoon, which is filled with soothing minerals. This is a great way to experience the fierce geothermal energy for yourself.

After a drive through the lava fields, with an optional tour to a cave in the area, you'll be brought to your exclusive accommodation for dinner and some luxurious soak in an outdoor hot tub. 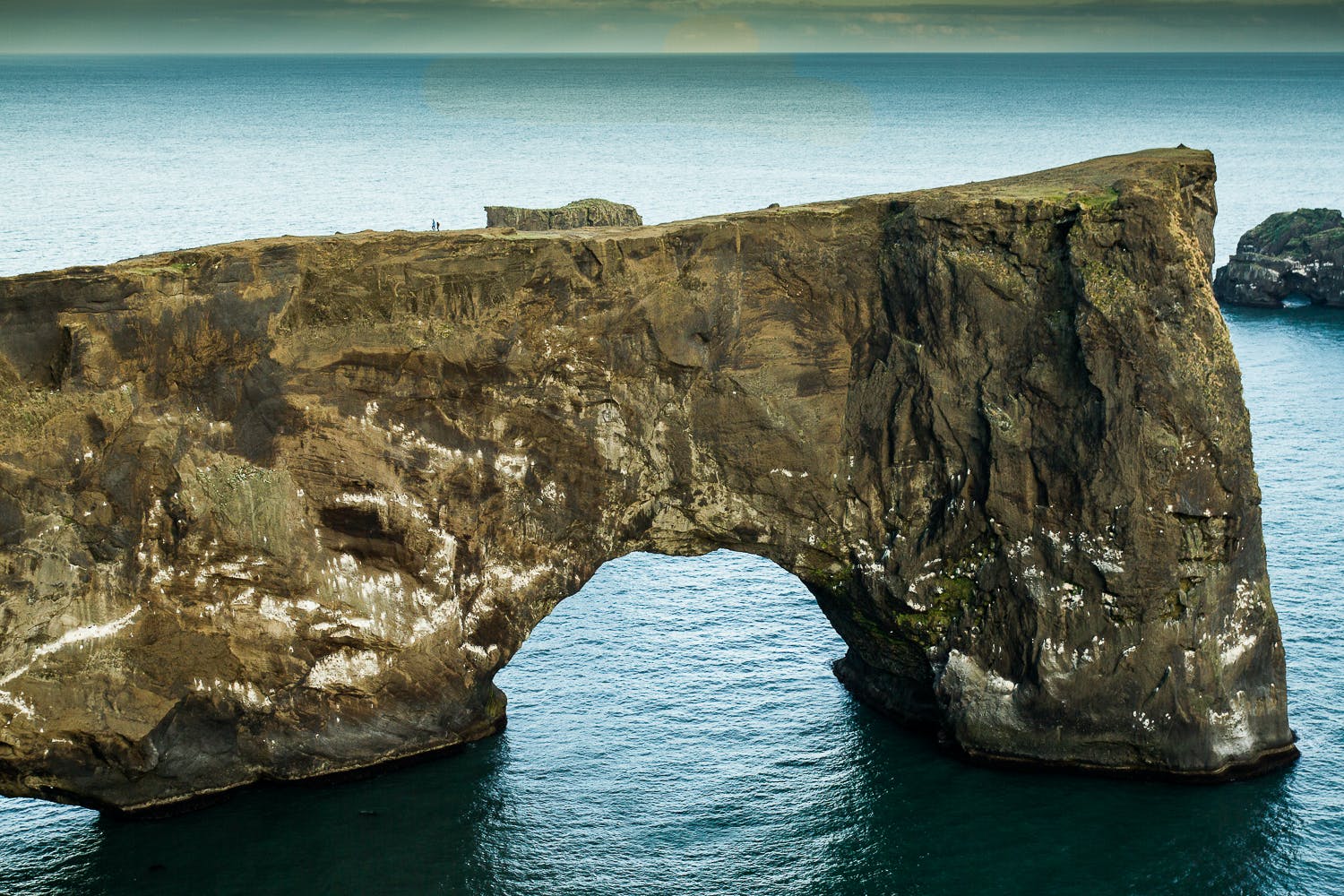 The Beautiful South - a Glimpse of Iceland

Following a hearty breakfast, you will explore Iceland’s southern coast. This scenic drive along waterfalls, mountains and glaciers is truly breath-taking, and this is your opportunity to see nature’s wonders up close.

One of the most amazing sights is the waterfall known as Seljalandsfoss. This cascade is fed by an ancient glacier and falls down high cliffs to a path that lies between the water and the glacier. You’ll be able to walk behind the waterfall and take in a truly one-of-a-kind vista. At times, you may feel the mist of the water against your face. During the summer months, colourful flowers thrive by the falls, making it an ideal area for a picnic.

Near Seljalandsfoss, you will find another one of Iceland’s amazing wonders, the Skógafoss waterfall by the Skógá river. You will be able to get up close to the wall of water, which cascades 60 meters down. Be ready for a refreshing soak as you stand on the observation deck. Thanks to the perpetual mist, you can enjoy a picturesque rainbow when the sun is out.

Like much of Iceland, there is a legend associated with Skógafoss. It seems that the first Viking to arrive in Iceland, Þrasi Þórólfsson, put a golden treasure in a chest and hid it behind the Skógafoss waterfall. Three men actually are said to have found the chest, but when they tried to grab it by a golden ring and retrieve it from the wall, all they got was the ring as the chest disappeared. The ring, however, still exists and can be seen at the Skógar Museum.

If you feel up to it, a walk on the glacier Sólheimajökull Glacier can be arranged. It is a thrill you’ll remember forever. Not far from the glacier is the small peninsula of Dyrhólaey, with its black sand beaches and puffin habitats. There is an abundance of other natural wildlife, as well, from guillemot to fulmar.

From Dyrhólaey, you’ll see the enormous glacier Mýrdalsjökull, along with the entire spectacular coastline, with waves crashing to the shore. In the ocean, there is a large arch made up volcanic lava. These sights are a perfect photo opportunity, as you’ll have a close-up view of this beautiful phenomenon of nature.

You’ll end this long but exciting day back at your base, with a good meal and a dip in the outdoor hot tub. 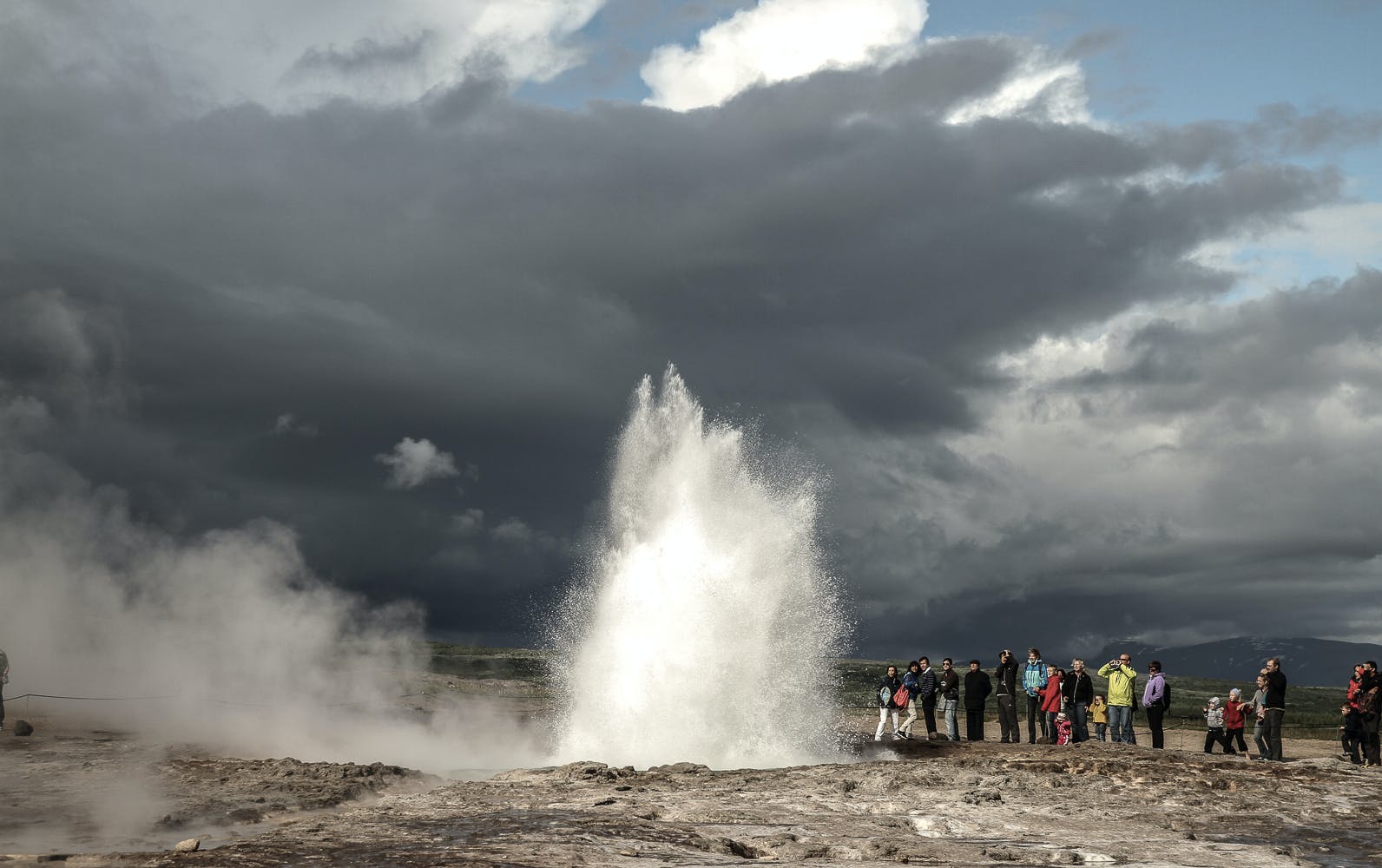 This is the last day of our tour, and it will be unforgettable. You will explore Iceland’s most popular circular drive, the 300-kilometre Golden Circle. Your stops will include Þingvellir, a historic national park; Gullfoss, a waterfall located by the Ölfusá River; and Haukadalur, an area with stunning, active geysers.

You’ll get an early start, which will give you plenty of time to explore. There is so much to see, and you will be making stops along the way when requested. You’ll want to savour every moment of this day.

The first stop is at Haukadalur, with its active geysers and bubbling mud pits that can resemble a witch’s cauldron. The hot springs in this geothermal area are the result of massive pressure building from the hot water against the rocks beneath the surface.

The famed Geysir geyser has been inactive for a while, but the nearby Strokkur is very active and erupts continually, spouting hot water up to 30 meters in the air many times each hour. The water is so hot that the local chefs sometimes use it to boil eggs and bake bread in the heated ground.

From Haukadalur to Gullfoss, one of Iceland’s most amazing waterfalls by the Hvítá River. It was created during the Ice Age and is fed by the glacier Langjökull as it drops 32 meters in two 'steps' into a great canyon. The Gullfoss freezes during winter months, presenting a magnificent ice spectacle. During the summer, it is surrounded by colourful rainbows. There is never a wrong time to visit Gullfoss.

You'll stop at Friðheimar Farm for lunch. There, they use Iceland’s natural geothermal hot springs to grow tomatoes and cucumbers in their greenhouses throughout the year, despite the freezing winters. You can enjoy a delicious tomato-based meal inside the greenhouses.

The final leg of your trip takes us to Þingvellir National Park, the site of early Norse settlement around 900 AD. It is also the only place in the world where you can see the sights of two continents in the Mid-Atlantic Rift Valley. You’ll see the North American side to the west and the European side to the east.

You will be driven from one side to the other as you approach the Þingvellir National Park. Within the park lies Þingvallavatn Lake, one of Iceland´s biggest freshwater lakes.

You have now experienced the best Iceland has to offer. At the end of the day, you will be driven to your accommodations or to the airport. We wish you many happy returns.

We might alter the plan as we go along, depending on your interests as we are not bound by hotels or other people traveling with us. This is a private tour.

The weather in Iceland is unpredictable so pack wisely and come prepared.

We recommend bringing a warm base layer, a breathable mid layer and finally a wind & waterproof outer layer to protect you from the elements.

Otherwise we trust you good judgement.

On this tour you are not staying in a busy hotel so be prepared for some quality time with your friends and family.