Bag your place on this thrilling 4-Day excursion exploring the many delightful attractions of Iceland's south and south-west. This is a fabulous opportunity for any visitor looking to take their time exploring and appreciating Iceland's world-famous Golden Circle and South Coast sightseeing routes.

You will begin this adventure by being picked up from your accommodation in Iceland's charming capital city, Reykjavík, before being driven off to partake in the famed Golden Circle. This sightseeing route comprises of three major attractions; Þingvellir National Park, Haukadalur geothermal valley and the mighty waterfall, Gullfoss.

At the end of your first day (and for your second night) you will be staying in cosy accommodation right in the middle of the Golden Circle. Nothing beats a day of exploring like a dip in the hot tub.

The second and third days of this tour are focused on Iceland's beautiful South Coast, one of the more aesthetically pleasing regions in the country. Not only will you see the waterfalls Seljalandsfoss and Skógafoss, but you'll also have the chance to visit "the Crown Jewel of Iceland", Jökulsárlón glacial lagoon and the nearby Diamond Beach.

The second accommodation you will be staying at is a mountain hut close to Kirkjubæjarklaustur village. This accommodation has no electricity and limited telephone connectivity but provides for amazing isolation and tranquillity. The final day of your tour will be spent exploring the hauntingly rugged region of the Reykjanes Peninsula.

Don't delay any further! Book now and you too can experience the marvels of Iceland's south with this fantastic 4-Day sightseeing tour. Check availability by choosing a date. 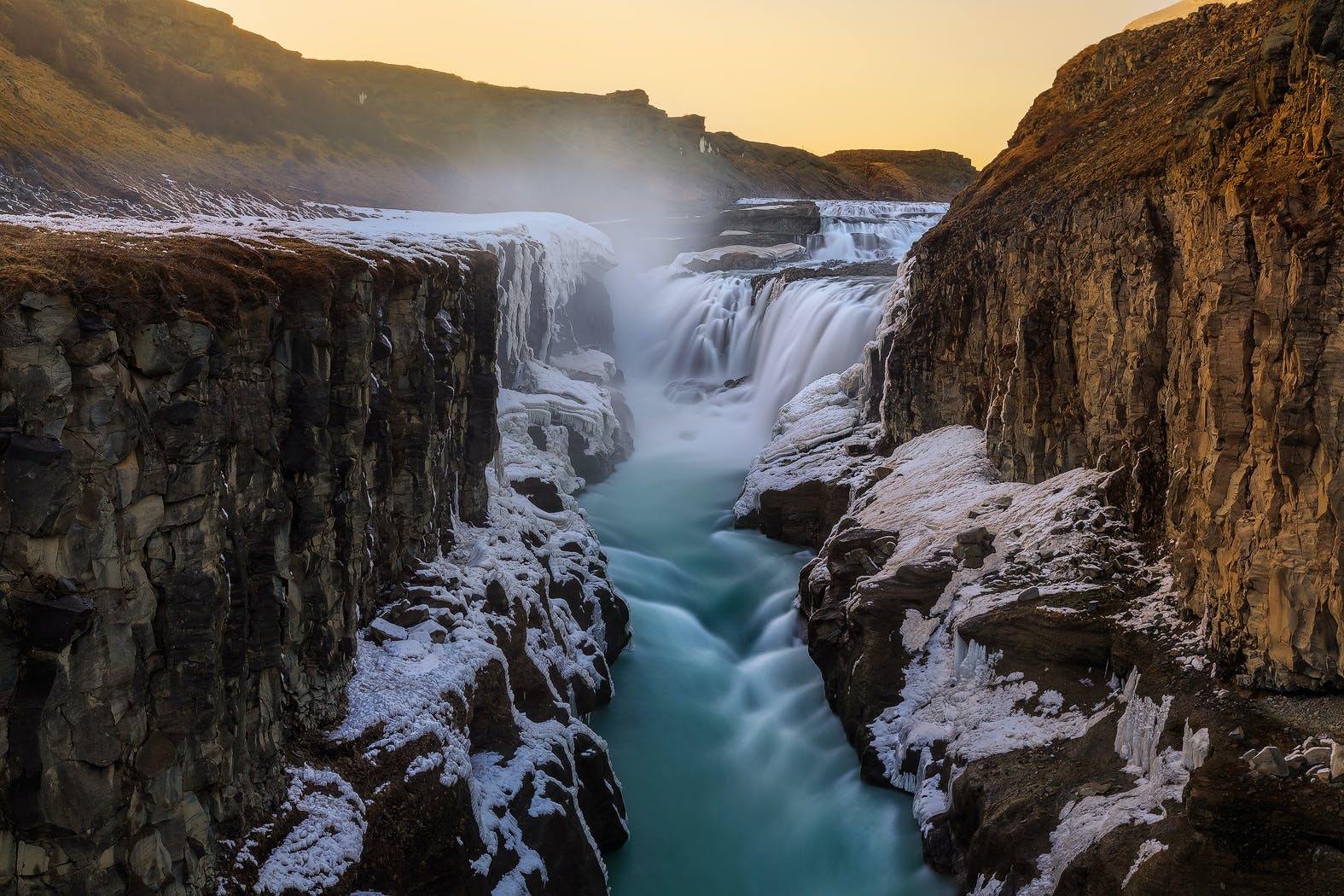 Your first day is all about the world-famous Golden Circle sightseeing route, beginning roughly forty minutes away from Iceland's capital city, Reykjavík. You will begin by visiting Haukadalur valley, home to the impressive hot springs, Strokkur and Geysir.

Whilst Geysir is now dormant, it did lend its name to geysers around the rest of the world. It's cousin, Strokkur, is routinely active, however, erupting every five to ten minutes. Aside from the hot springs, guests can appreciate bubbling hot pools, steaming fumaroles and muddy volcanic vents.

From Haukadalur, you will head to one of Iceland's most majestic waterfalls, the visually stunning Gullfoss. Known colloquially as "The Golden Falls", visitors here will see a rampage of frothing water cascading over two cragged tiers, pouring 32 metres into the darkened gorge below.

Next up, you'll grab a bite to eat at Friðheimar Farm, known for its ripe, organically-grown tomatoes and delicious, authentically Icelandic cuisine. You will then make passing visits to two power plants, Ljósafossvirkjun and Nesjavellir, before arriving at your final stop of the day, Þingvellir National Park.

This is one of the most important locations in Iceland, both geologically and culturally. It is here, after all, where the worlds first democratically elected parliament was formed in 930 AD, as well as where Icelanders chose to adopt Christianity as the collective religion. Visitors will be able to read numerous information boards detailing this time at the park.

Þingvellir also sits on the Mid-Atlantic Ridge, an area of geothermal and geological activity that has forced both the North American and Eurasian tectonic plates from earth. Given the drama of the scenery, it is no wonder that Þingvellir is such a popular shooting location for fantasy shows and films.

After your time at Þingvellir is done, you will head to your accommodation nearby for some much-needed rest and a dip in the hot tub. 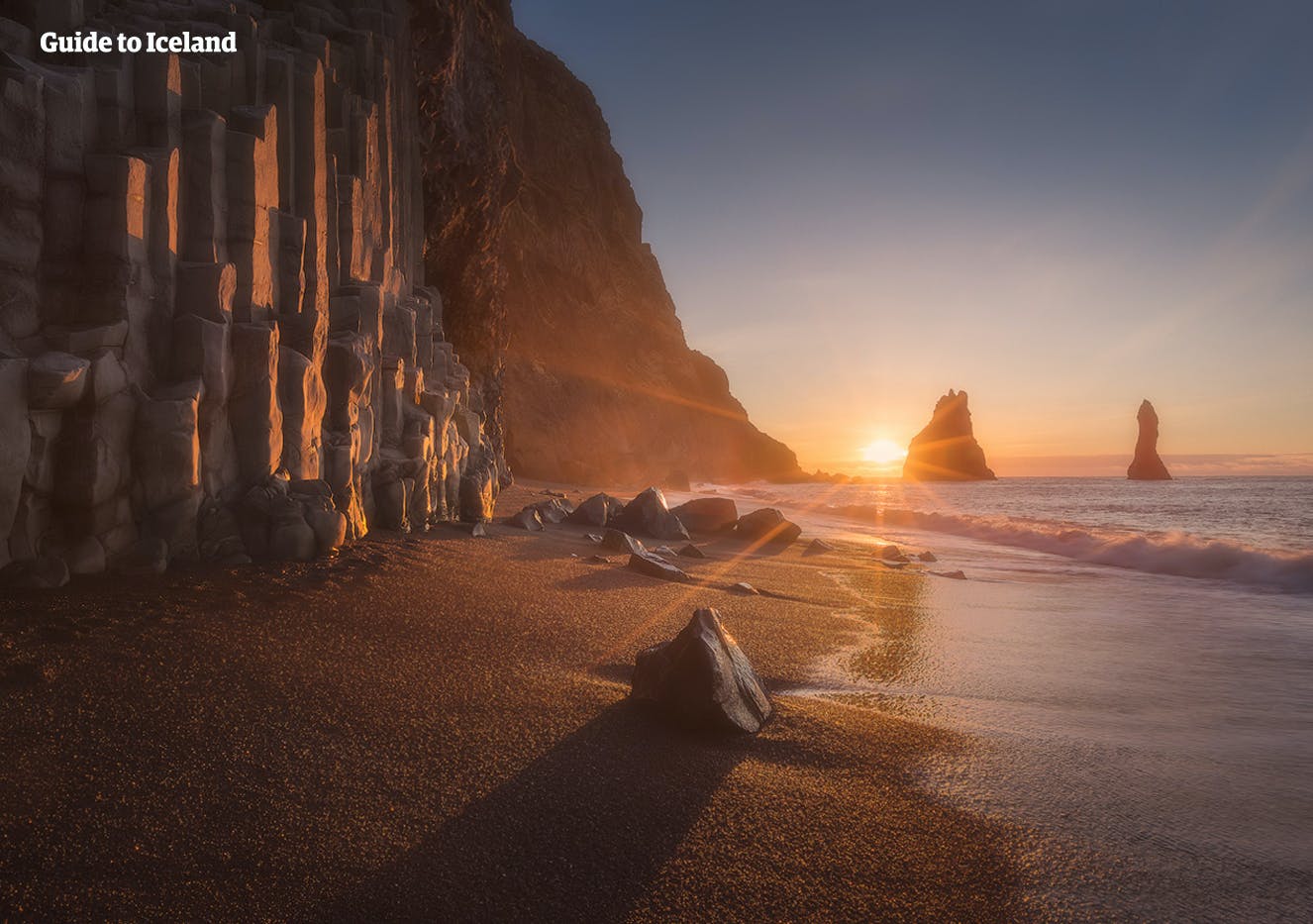 The South Coast of Iceland

The second day of your tour sees you travelling the stunning South Coast of Iceland; by sundown, you'll have experienced glistening waterfalls, rugged coastlines, distant mountainscapes and creeping glaciers.

Your very first stop is the picturesque waterfall, Seljalandsfoss; falling 60 metres in a narrow flow, visitors can walk behind the cascading water to take truly spectacular photographs.

The next stop is Skógafoss, a larger and more powerful feature than Seljalandsfoss and equally stunning. With a drop of 60 metres and a width of 30 metres, visitors to Skógafoss can actually walk right up to the point where the water crashes into the rock below, making for some excellent photographs. When your time at Skógafoss is done, you'll continue to make your way along the South Coast.

At this point in this day, it is possible to add-on a hike up the majestic white giant that is Sólheimajökull Glacier; by partaking in this extra activity, you're sure to secure yourself one of the most memorable and awe-inspiring activities available in the country.

Next up is the small peninsula, Dyrhólaey, formerly an island, now part of the mainland, boasting some incredible views of the surrounding area. You will also be able to see the Dyrhólaey rock arch, as well as nesting seabirds in the cliff face.

On your way back to your accommodation, you will visit the coastal village of Vík í Mýrdal, as well as the nearby black-sand beach, Reynisfjara, famed for its sleeper waves, volcanic pebbles and strange basalt rock columns. When your time at the beach is over, you will return to the same accommodation as on the first night. 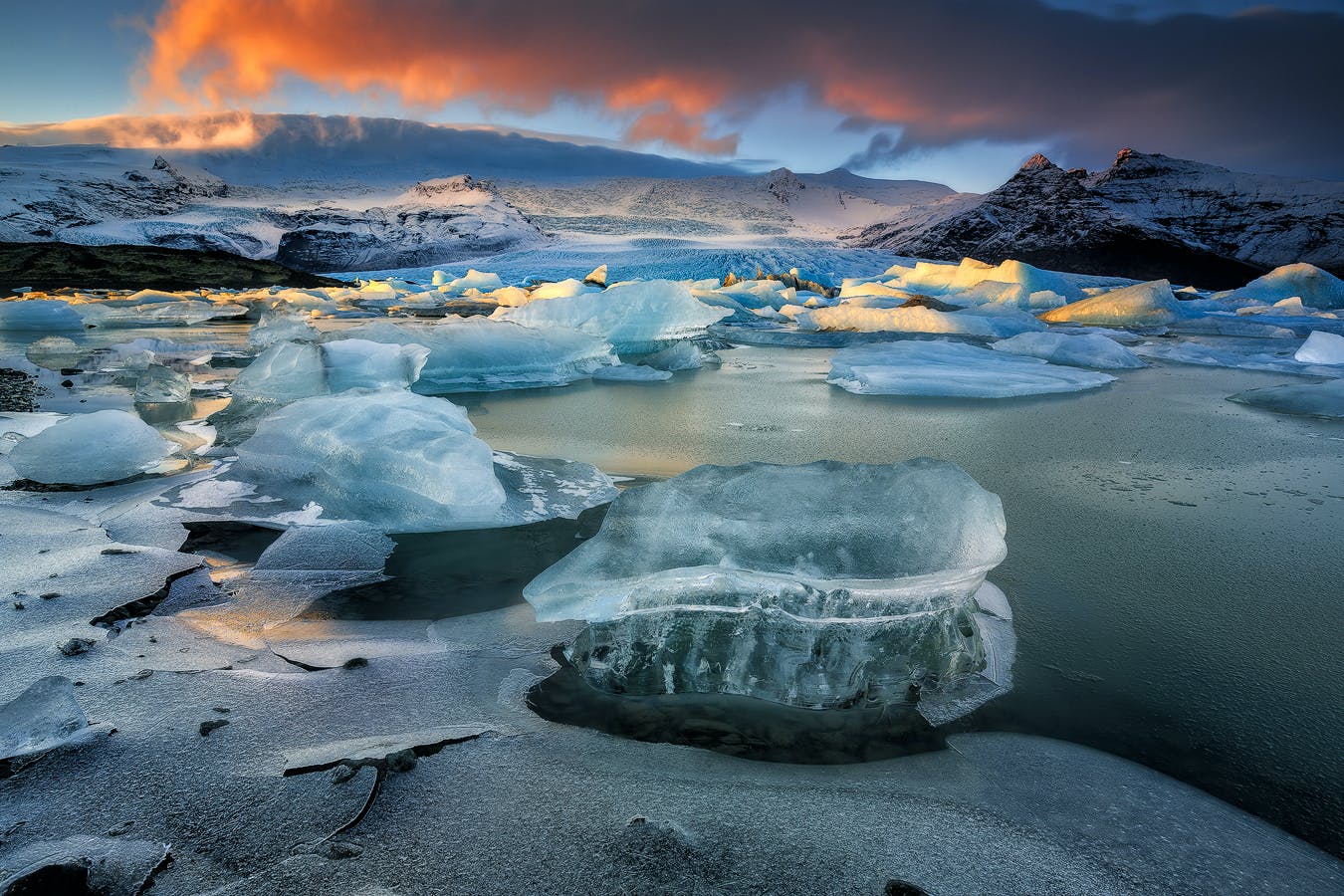 With the first half of the South Coast seen, today is focused on discovering the second chapter of great attractions just waiting to be explored. The green and lush farmlands will give way to a barren black sand desert, and the horizon will forever be dominated by the dramatic, sweeping slopes, mountains and glaciers of Vatnajökull National Park.

Your first stop of the day is Jökulsárlón glacial lagoon, widely considered to be the most beautiful and unique attraction in Iceland. Icebergs break off from the glacial tongue Breiðamerkurjökull, landing in the lagoon where they float, cracking and heaving, before gliding out toward the open Atlantic Ocean. Visitors can actually follow this process, walking five minutes to the nearby Diamond Beach; here, icebergs wash ashore, creating a fantastic contrast to the black pebbles.

Whilst at Jökulsárlón, it is possible to take an added-on Zodiac boat tour, the only real way to get up close and personal with these glistening frozen giants, as well as the playful seal colony that calls Jökulsárlón home. Either way, when your time at the lagoon is over, you will begin to make the journey back to your accommodation. 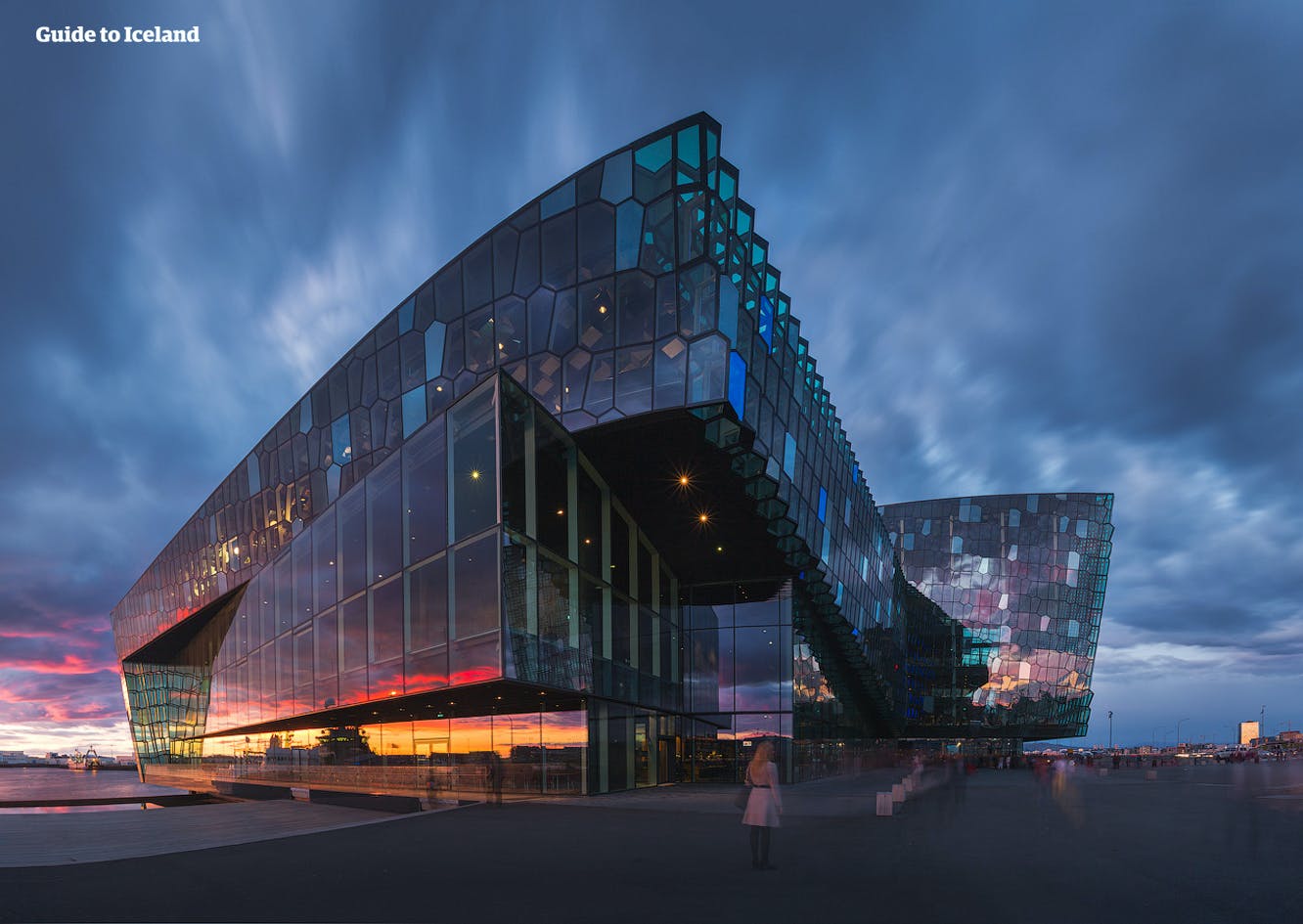 The final day of your tour sees you exploring the rugged lava fields of the Reykjanes Peninsula, a UNESCO Global Geopark and one of the more distinctive regions in Iceland.

Your first stop of the day is at Iceland‘s oldest lighthouse, the majestic Reykjanesviti, nestled in a picturesque geothermal area. The area is collectively named after the hot spring Gunnuhver, which in turn draws its name from a ghost that was once said to haunt the region. That is until a Priest trapped her in a hot spring 400 years ago, or so the story goes.

The rest of the day is taken up with stopping at various attractions, chosen at the discretion of the driver, with the potential to stop at the Blue Lagoon Spa for an added touch of bathing. This must be booked beforehand, however. You will also make a stop for lunch before heading back to Reykjavik.

Then, it's bon voyage.

The accommodation on this trip is all privately owned. You will not meet any tourists during your stay at these facilities. We might alter the plan as we go along, depending on your interests as we are not bound by hotels or other people traveling with us. This is a private tour. The weather in Iceland is unpredictable so pack wisely and come prepared. We recommend bringing a warm base layer, a breathable mid layer and finally a wind & waterproof outer layer to protect you from the elements. Otherwise we trust you good judgement. On this tour you are not staying in a busy hotel so be prepared for some quality time with your friends and family.