Join this fantastic 5-Day tour exploring the many marvellous attractions of Iceland's gorgeous south and south-west regions, with the added possibility of partaking in bonus activities.

This is the perfect tour opportunity for visitors to Iceland looking to maximise their time sightseeing and appreciating this country's natural aesthetic, as well as for those aiming to combine sightseeing with a little adventure. Your overnight accommodation for this tour is at two privately owned locations.

This tour is split over five days, leaving you with more than enough time to fully discover and appreciate the attractions that make Iceland such a desirable travel destination. Your first two days will be taken up with the Reykjanes Peninsula and the world famous Golden Circle sightseeing route, which comprises of three major attractions; Þingvellir National Park, the mighty waterfall Gullfoss and the Geysir area in Haukadalur geothermal valley.

On your first day of this tour, it is possible to add-on a stop at the world-famous Blue Lagoon Spa, known for its luxurious and relaxing azure waters and healing silica mud.

The remainder of your trip will be focused on the natural attractions found on Iceland's beautiful South Coast. Not only will you get to see firsthand the attractive waterfalls, Seljalandsfoss and Skógafoss, but you walk across the jet-black pebbles of Reynisfjara beach and experience the dazzling charms of Iceland's "Crown Jewel", Jökusárlón glacial lagoon. During this time, you may be able to add-on a glacier hike up the majestic Sólheimajökull glacier. 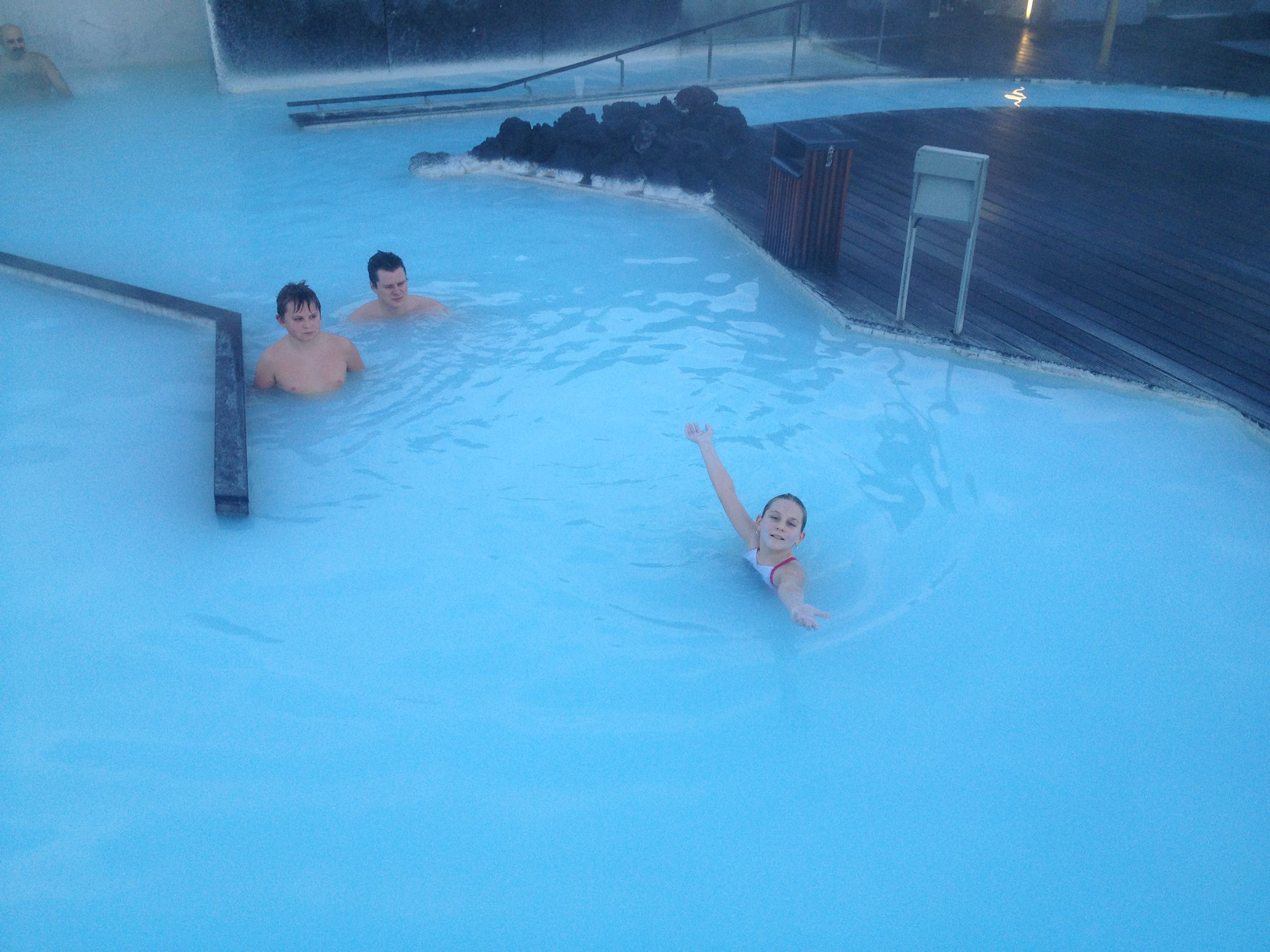 The first stretch of this tour is exploring the rugged lava fields of the Reykjanes Peninsula, a UNESCO Global Geopark famed for its cragged rock formations, twisting coastlines and bubbling geothermal power.

Your first stop here is at the majestic Reykjanesvíti lighthouse, from where you will have incredible views of the surrounding area. Make sure not to forget your camera; the coastal panoramas are spectacular, and you're even likely to explore the nearby geothermal areas so characteristic of this peninsula.

Given your proximity, you will have the chance to add-on a visit to the world-famous Blue Lagoon Spa. With rising steam clouds and flat, azure water, this is one of the most relaxing and classy establishments to spend a couple of hours soaking those muscles. There's no better way to beat the jet lag than this.

If the Blue Lagoon Spa isn't for you, you could opt to add-on a caving trip to this section of the tour, an opportunity that provides real insight into Iceland's fascinating subterranean worlds.

After your time at Reykjanes is over, you will for your first night at your private accommodation for a dip in the hot tub, a bite to eat and some much-needed rest. 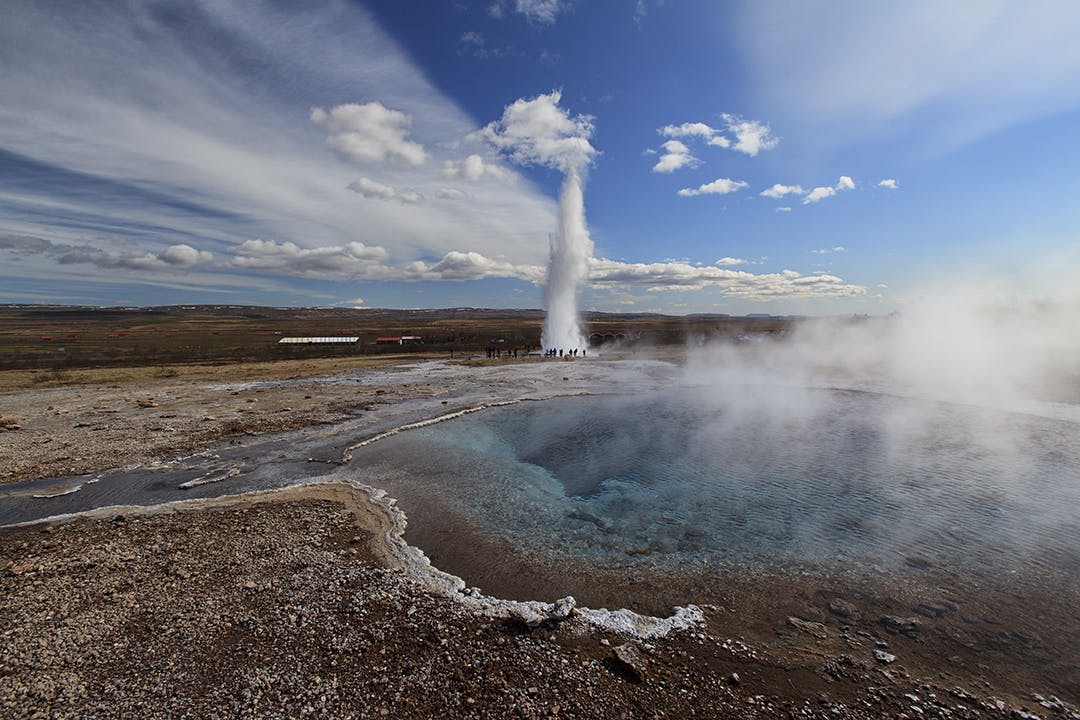 First, you will go to Haukadalur valley, made famous by its powerful hot springs, Strokkur and Geysir. Today, the latter hot spring is dormant, meaning it is barely active, in stark contrast to Strokkur which erupts every ten minutes or so. At Haukadalur, one is also free to explore the nearby shops and restaurant.

Next is the Golden Falls, Gullfoss, one of Iceland's most beautiful powerful and dramatic waterfalls. Cascading over 32 metres into a dark canyon below, this stop is bound to defy the imagination and will put you in mind of just how powerful the elemental forces of Iceland's nature can be.

After a stop of lunch at the quality and authentically Icelandic establishment, Friðheimar Farm, you will pass by two power plants, Ljósafossvirkjun and Nesjavellir, before arriving at Þingvellir National Park, your final stop of the day.

Þingvellir is one of the most well-visited destinations in Iceland, in large part due to its fascinating geology, culture and history. Not only was the world's first democratically elected parliament formed here in 930 AD, it is also one of the only places in the planet where you can see both the Eurasian and North American tectonic plates standing exposed from the earth. Scuba divers will also recognise  Þingvellir as being home to the glacial spring, Silfra Fissure, one of the top ten dive sites internationally. 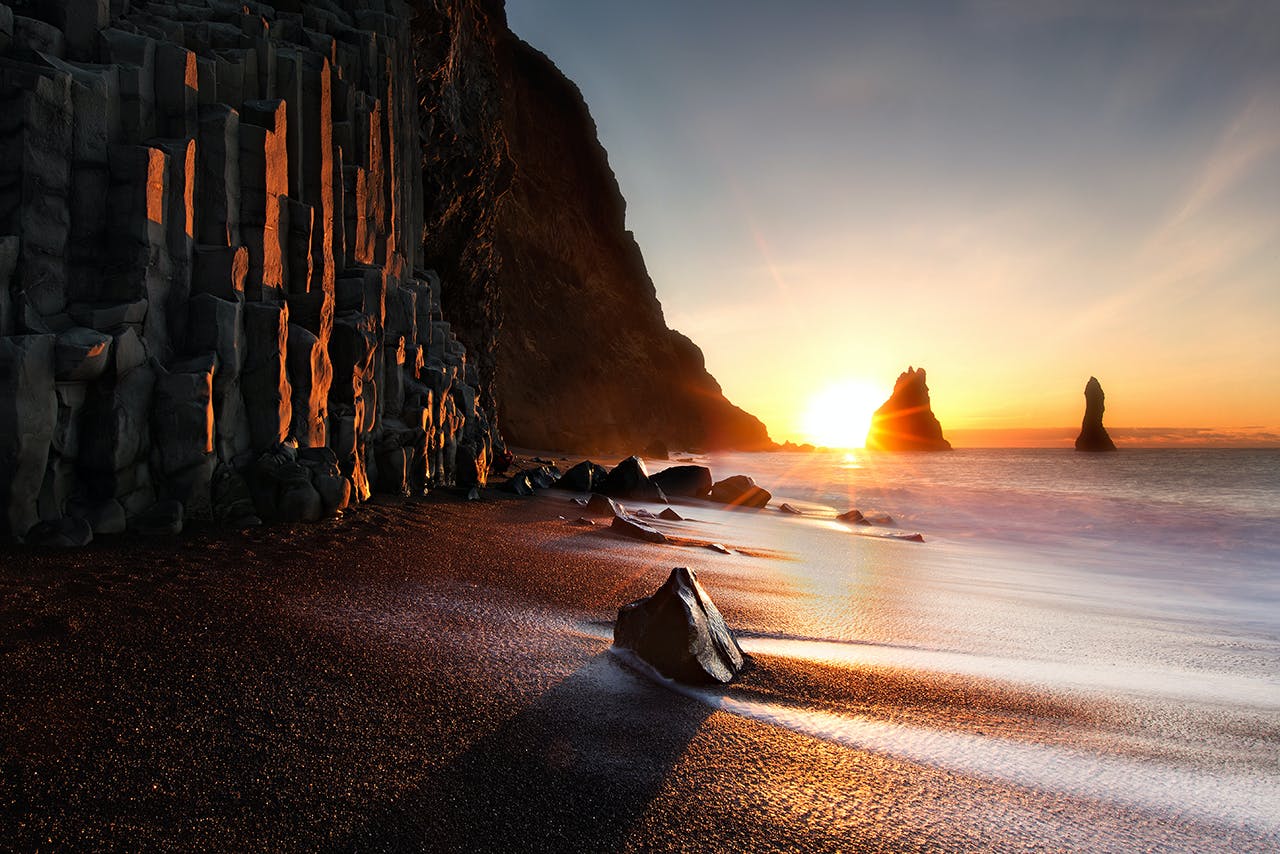 The South Coast of Iceland is widely regarded to be one of the most beautiful stretches of land in the country. From distant, snow-capped mountainscapes to rugged coastlines and creeping glaciers, almost everything that makes this country what it is can be found right here.

Two of the major attractions on the South Coast are the waterfalls, Seljalandsfoss and Skógafoss. Seljalandsfoss is a rare example of an Icelandic waterfall that can actually be walked behind (though be careful, the rocky path can get quite slippery)! This wealth of available perspectives is why this feature is so beloved by photographers.

Skógafoss is larger than Seljalandsfoss, wider and more powerful, taking the form of a giant curtain of cascading water, pouring over the lip of the cliff face. According to legend, one of Iceland's earliest settlers hid a treasure chest behind the frozen water; true or not, visitors to Skogafoss can right up to the crashing water, providing fantastic photographic opportunities.

After spending times at these waterfalls, it is possible to add-on a bonus glacier hiking tour up Sólheimajökull. Nothing can beat the feeling of exhilaration and adrenaline as you summit one of this land's majestic ice caps, providing views of the South Coast that are to die for.

Your third day will conclude with spending some time along the South's rugged coastline. You will first visit the rock arch, Dyrhólaey, where it is possible to great distances across the landscape, as well as a flurry of nesting seabirds, including puffins.

From Dyrhólaey, you will head to Reynisfjara, a black sand beach famed for its volcanic pebbles, large sleeper waves and fascinating basalt rock formations. Just nearby is the coastal village of Vík í Mýrdal, perfect for some last minute souvenir shopping. 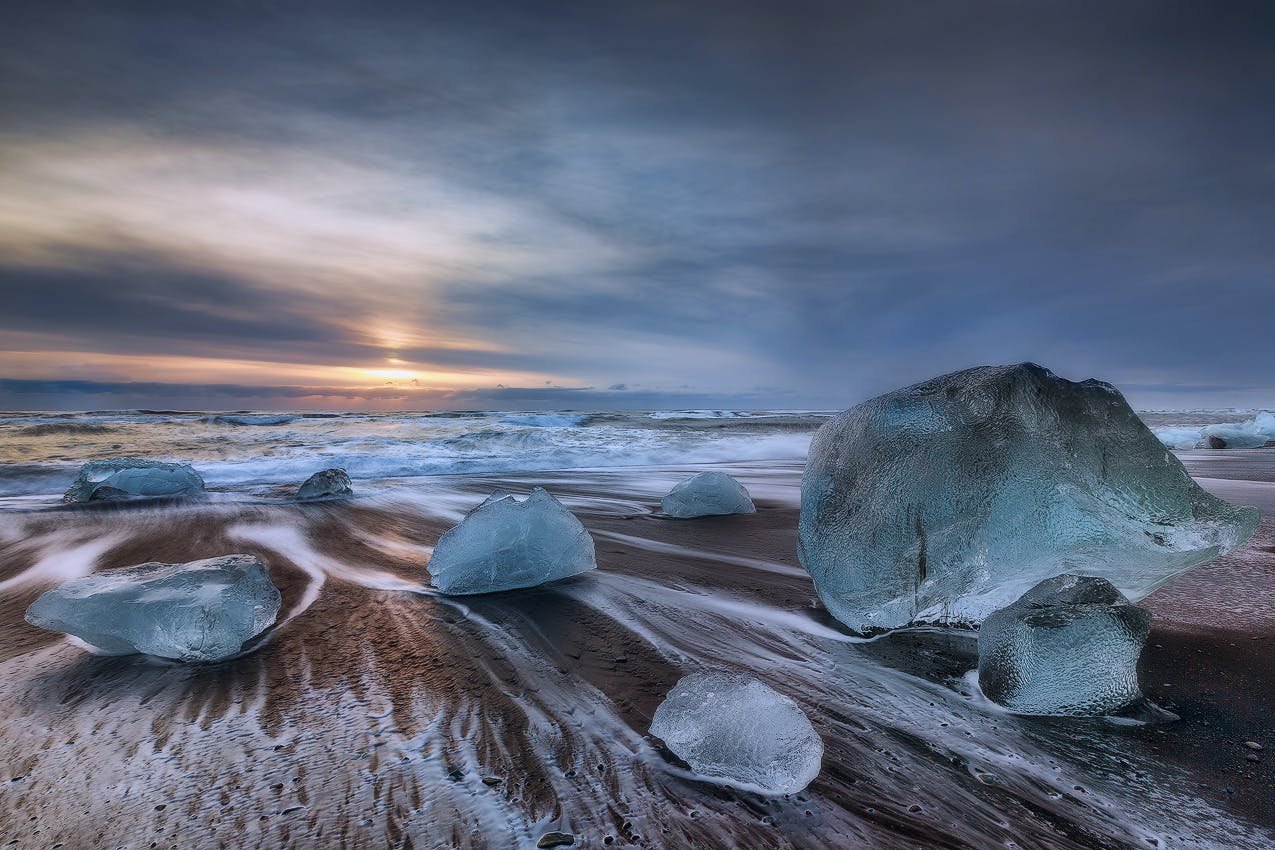 At the base of the park, visitors will find Jökulsárlón glacial lagoon, known as "The Crown Jewel of Iceland" thanks to its glittering, aesthetic appeal. Home to a playful seal colony and many species of seabird, this lagoon is filled with dazzling icebergs of all shapes and sizes, having broken off from Breiðamerkurjökull glacial tongue to float at the water's surface. To get even closer to these icebergs, it is possible to take a short boat tour on the lagoon, at added expense.

Only five minutes walk from the lagoon itself, travellers will find Diamond Beach, the point at which icebergs float up against the shoreline on their journey towards the open Atlantic Ocean. Nature enthusiasts and photographers will find this region presenting spectacular opportunities, resembling nowhere else on the entire planet. When your time at the beach is done, you will begin to make your way back to your overnight accommodation. 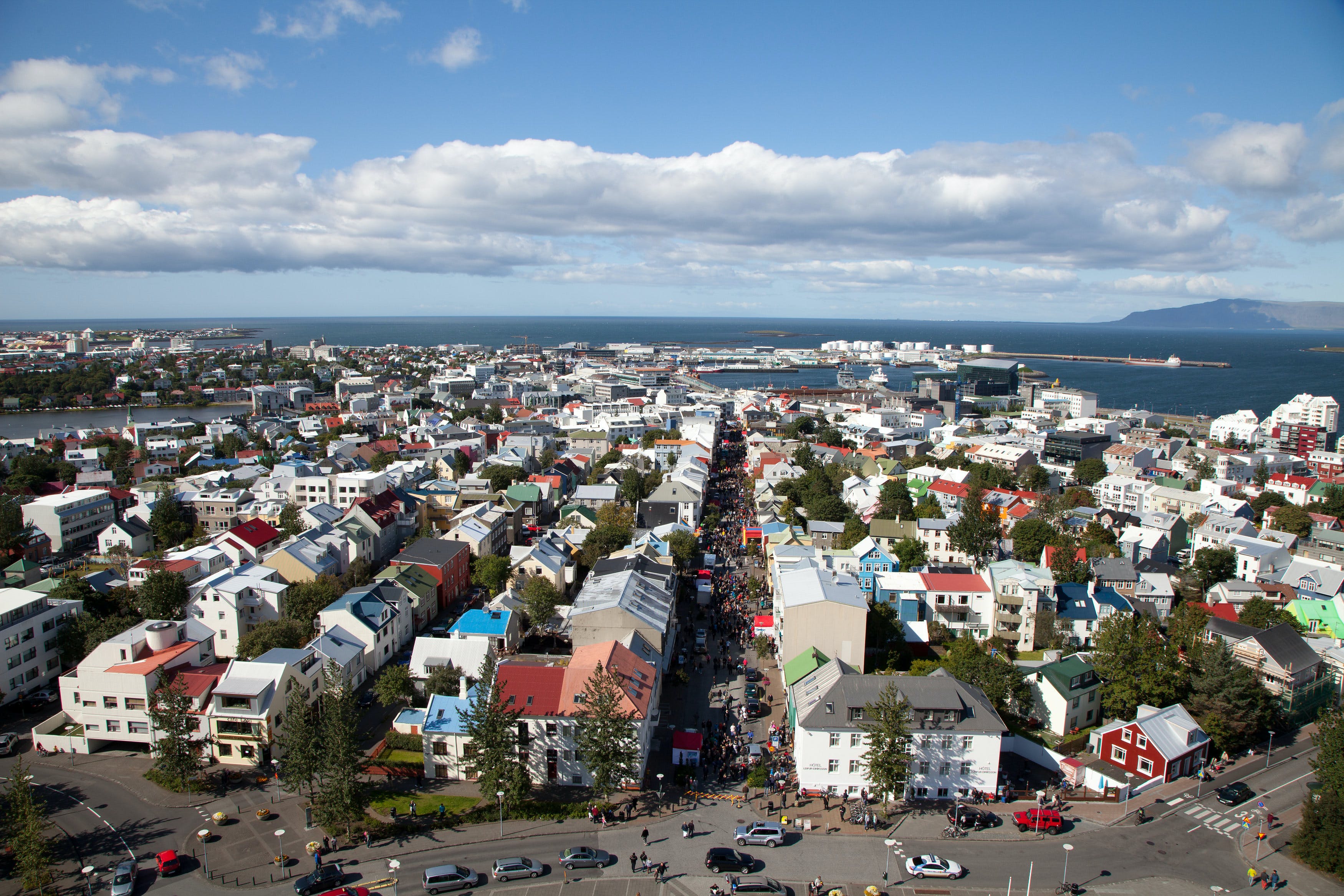 Return to the Capital

It's your final day; making the return journey back to the capital, there will likely be time to take a short hike through truly lush and gorgeous environments, as well as make a stop for lunch and any other attractions along the way. By late afternoon, you will arrive back in Iceland's charming capital to fill out the remainder of your holiday.

The accommodation on this trip is all privately owned. You will not meet any tourists during your stay at these facilities.

We might alter the plan as we go along, depending on your interests as we are not bound by hotels or other people traveling with us. This is a private tour.

The weather in Iceland is unpredictable so pack wisely and come prepared. We recommend bringing a warm base layer, a breathable mid layer and finally a wind & waterproof outer layer to protect you from the elements. Otherwise we trust you good judgement. On this tour you are not staying in a busy hotel so be prepared for some quality time with your friends and family.