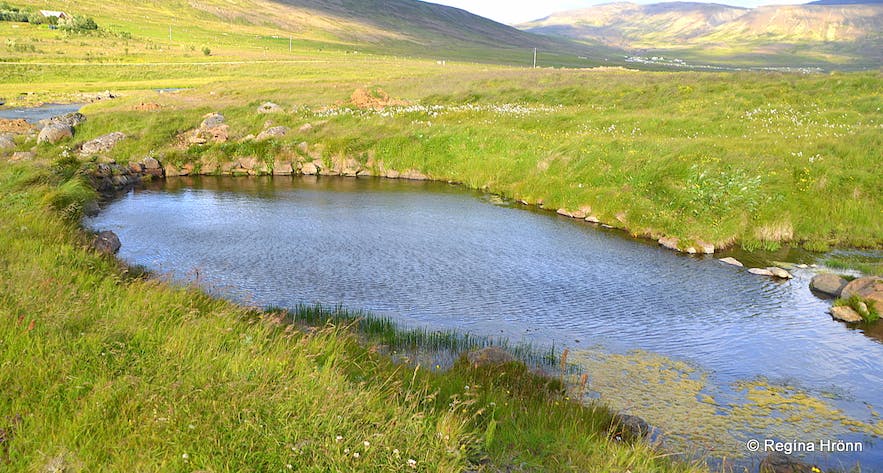 In my last travel-blog, I told you about a drive I made on a mountain road to visit the majestic waterfall Hvítserkur in a gully off the beaten path. We had taken the road Uxahryggir and turned onto the mountain road F-508 leading to Skorradalur valley.

Now I want to show you where the Uxahryggir road would have taken us if we hadn't turned off it to visit Hvítserkur waterfall. Straight into the 25 km long Lundarreykjadalur valley. This valley holds some natural attractions, as here you will find 2 natural hot springs, in which it is possible to bathe. They are called Krosslaug and Englandshver. 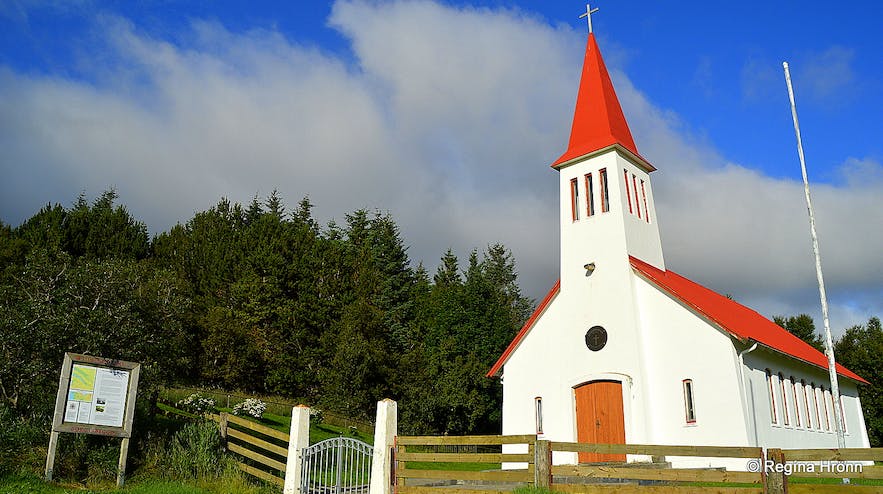 But first, we visited Lundarkirkja church by the farm Lundur. A hobby of mine is to visit all the churches, which I encounter on my travels in my country. Lundarkirkja church is on the pilgrim road in Iceland, leading from Bæjarkirkja in Borgarfjörður to the historical Skálholt.

A church has been on this site since the 11th century, but the current church is relatively new, built in 1963. It is so beautiful, white painted on the inside with beautiful decorations on the ceiling. Sadly due to vandalism, most of Iceland's churches are locked now, so I always have to bug the farmers to show me the church. 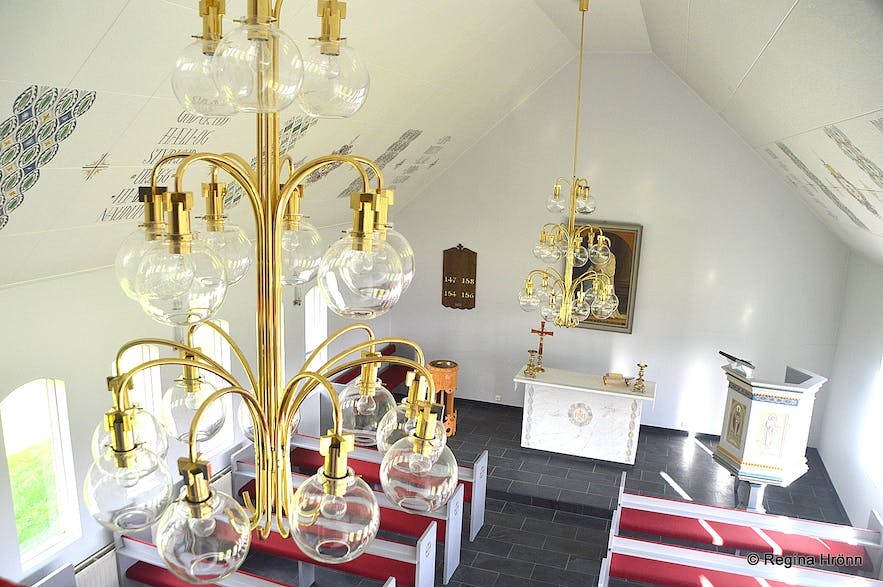 There are more than 350 churches scattered around Iceland and I have visited around 70% of them and plan on going for a 100% ;) Fitjakirkja church at Fitjar, which I showed you in my last travel-blog was an Annexe church from Lundarkirkja.

I turned from road 52 onto road 512 to visit the church at Lundur. At the intersection of these two roads, I stopped at Brautartunga rural activity centre and swimming pool.

The pool was built in 1964 by the youth organization Ungmennafélagið Dagrenning and the geothermal water in the pool comes from a hot spring close by. 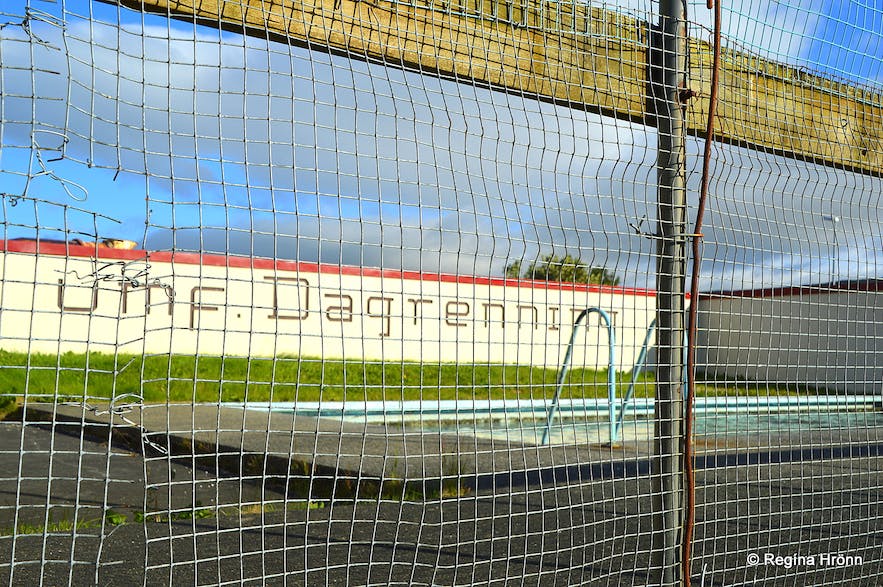 The swimming pool is open but unsupervised and I didn't dip in as I somewhat felt that I would be trespassing. However, it is allowed and I have been told that there is an honesty box where you can leave a small fee. 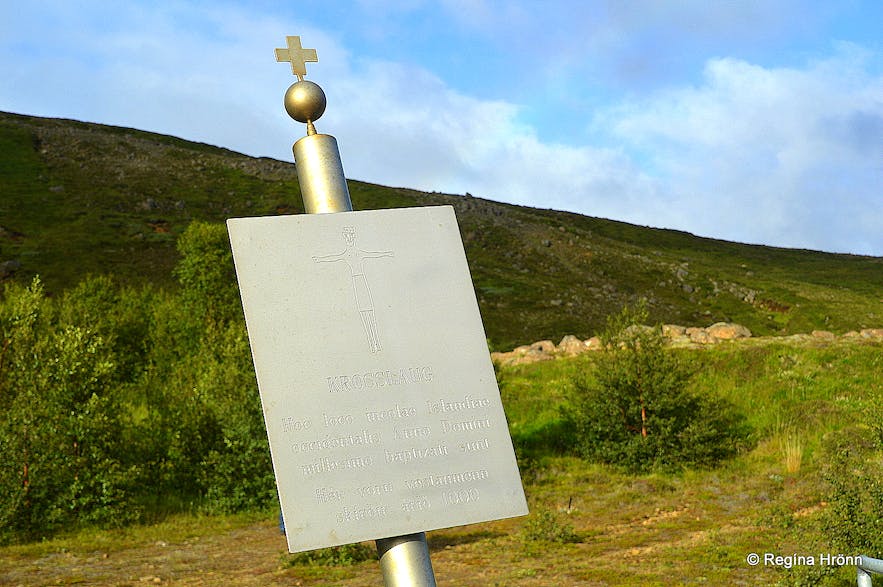 We now drove towards Krosslaug hot pool. We saw a car in the parking lot and realized that we would not be dipping into this pool on that day, as only 3-4 people can fit into Krosslaug at the same time. But this is what happens, the natural hot pools are very sought after and they are usually crowded nowadays.

By the entrance to the grove leading to Krosslaug hot pool, you will see the sign above. It reads both in Latin and in Icelandic: "Hér voru vestanmenn skírðir árið 1000" meaning that in the year 1000, men from West-Iceland were baptized in the pool. Follow a path for some 50 metres and you will reach Krosslaug. 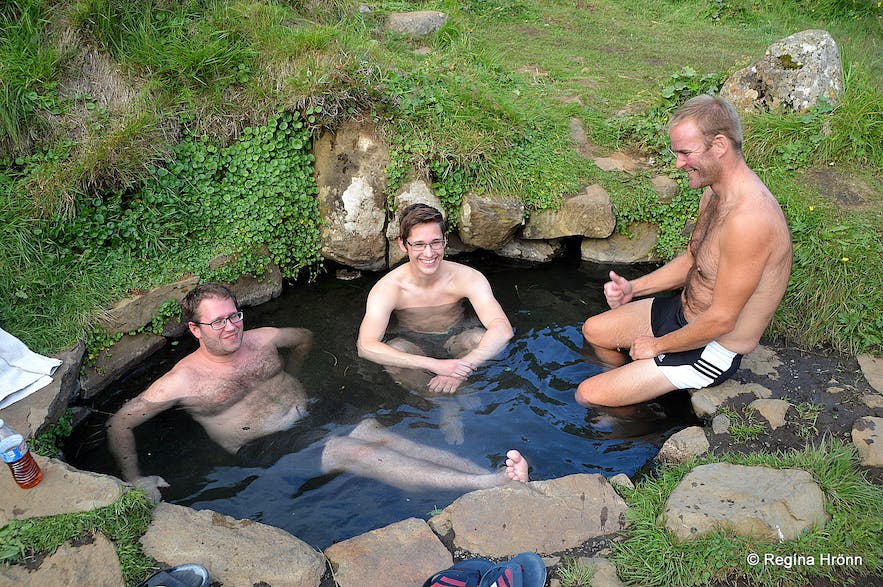 Krosslaug pool is small and contained 3 guys - plus 1 sitting in a hot creek close by. So there was no room for me to dip in, or so my husband said ;)

I asked the guys to pose for me and got their permission to use their photos for my travel-blog. I hope they see their photos someday. They spoke English, so I guess that they were tourists.

The water in the pool is around 42°C hot, so it must be so nice soaking in it. There are no changing facilities here, but you can change in the bushes as a grove has been planted by the hot pool. 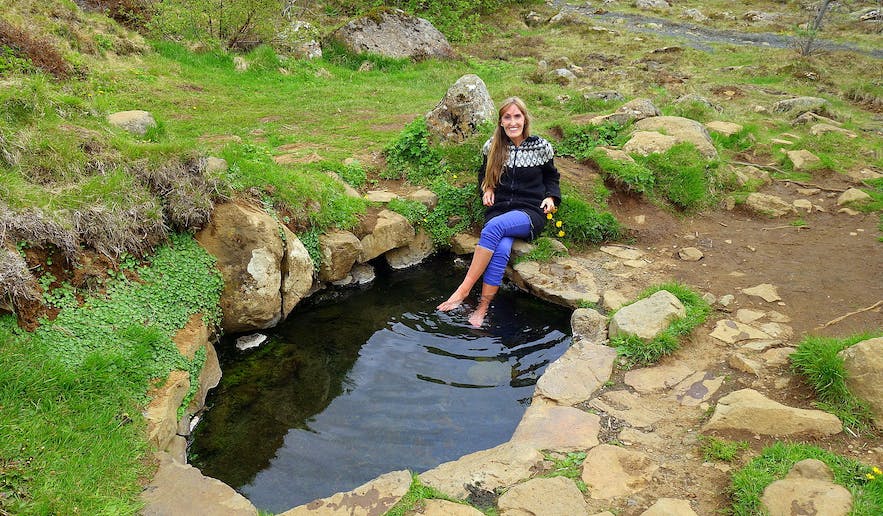 The name of the pool, Krosslaug - the Hot Pool of the Cross - stemming from the time of the Conversion to Christianity, which took place back in the year 1000 at Alþingi in Þingvellir. When the pagan Vikings from the west faced a cold immersion baptism in Lake Þingvallavatn, they protested. I understand why.

They settled on being baptized in the hot spring Krosslaug here in the valley. But the water had to be consecrated prior to the baptism of the pagans. Since then it is believed that Krosslaug hot pool has healing powers. 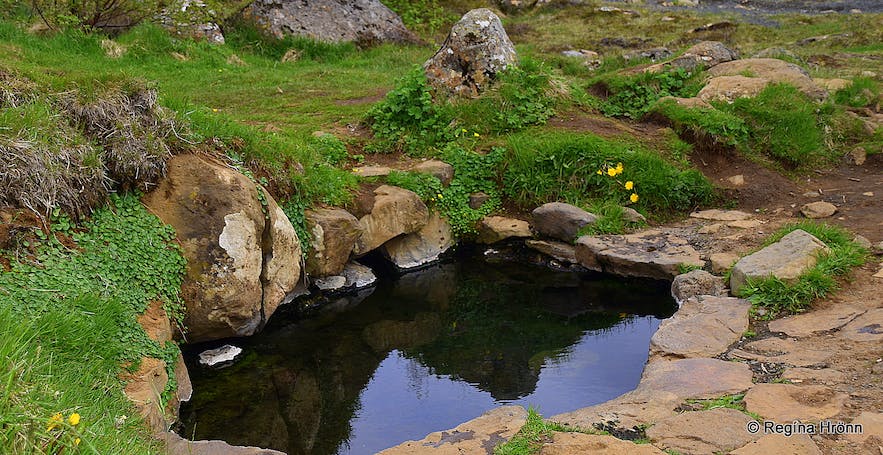 The historic pool is protected. Let's respect the natural hot pools and leave no trace. This is such a historic pool and I don't want to see it filled with litter like so many other hot pools in Iceland :(

Krosslaug pool is on the land of Reykir farm and goes also by the name of Reykjalaug. The farmers at the Reykir farm sell their produce here and at their farm. When I visited I saw a wheelbarrow with rhubarb jam next to an honesty box. 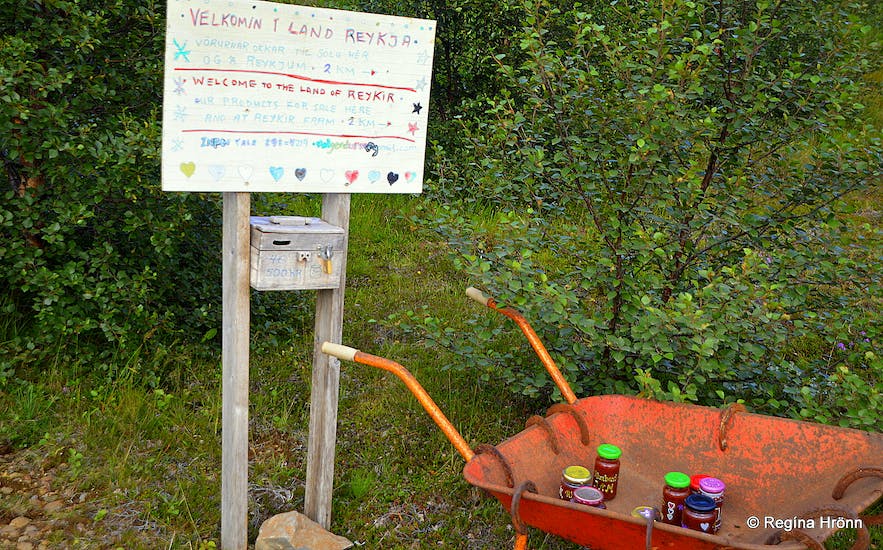 It always warms my heart seeing such a sight, it is so cosy somehow. The jars had colourful lids and beautiful golden letters. I hope that everybody puts money in the honesty box so that such trading can continue.

There are many farms in Iceland called Reykir and it always means that there is a geothermal area close by, as reykur in Icelandic means smoke, and in the olden times also steam. For example, the capital city Reykjavík, which was named by our first settler after he saw steam rising in the air. 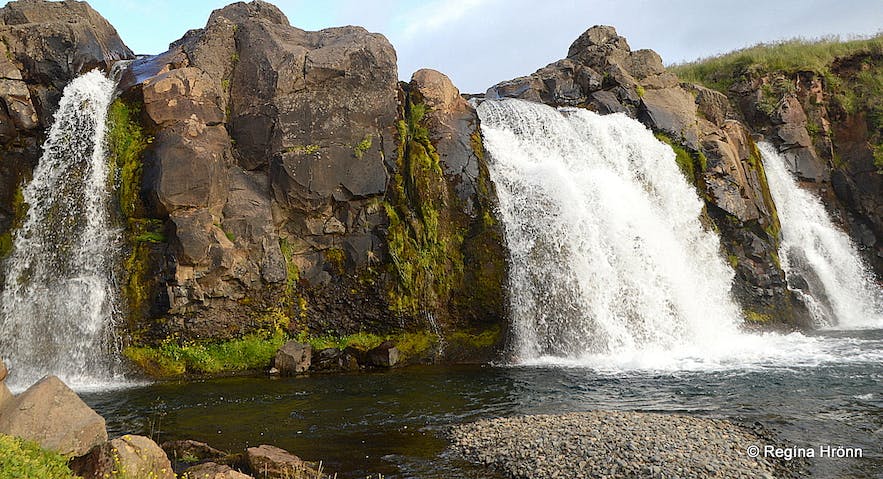 On our way to visit the next hot pools, Englandshver, we stopped by a small, but lovely waterfall called Englandsfoss or the England Fall. It is an 8-metre high waterfall in the river Tunguá.

England is an abandoned farm close by - it is not named after England in the U.K. though and it is believed that this farm is named after engi - which is the Icelandic term for a meadow. According to Sturlubók in Landnáma - the Book of Settlements then eng is the old term for engi.

Here is the sentence from Landnáma:

Land is the same word in English and Icelandic. Thus the farm got the name England or the Land of the Meadow. A funny coincidence though :) Ref.: DV-August 1986 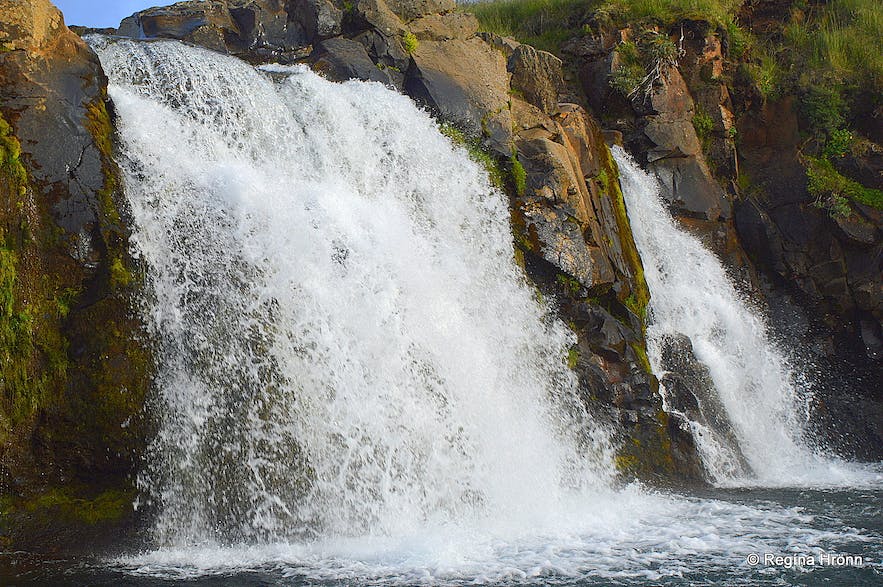 I have heard a story of the farm England which goes something like this: The farmer of the farm England was asked where he was from he said: "England". The man who had asked him said: "What, you don't look like an Englishman!" The farmer replied: "Það er víðar England en í Kaupmannahöfn skal ég segja þér" - meaning "I can tell you that England is to be found in more places than in Copenhagen".

This funny answer has been repeated many times in my country, and has almost become a saying ;) I don't know when this happened but Iceland was a part of Denmark for a long time and Copenhagen was the capital city. So he must have thought that foreign things, including England, were in Copenhagen ;)

It was a bit trickier visiting Englandshver hot pools, which is a series of pools hidden away in nature. They cannot be seen from the road and you have to know beforehand how to reach them.

Stop when you see a red metal pipe bridge and a small pump house. You can park your car here. We encountered some tourists who thought the pump house is a changing room—it's not! 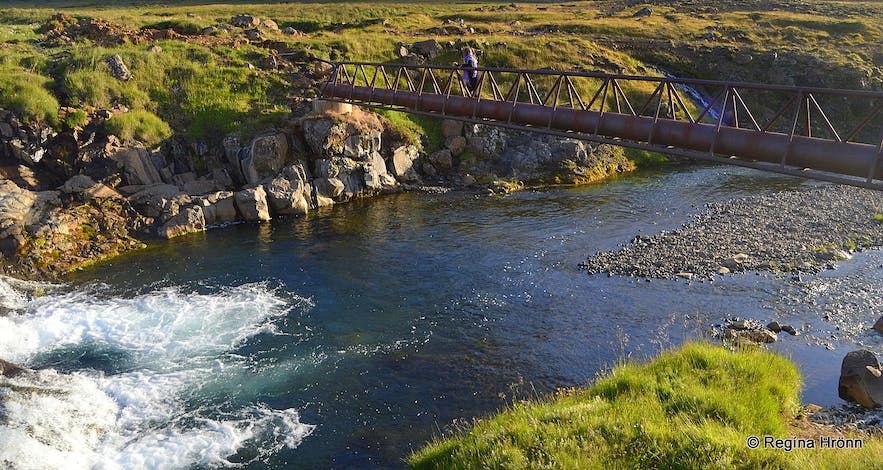 It is higher up than it looks in the previous photo

Now, how to reach the other side of the river Tunguá? My husband found out and we very slowly crossed the river hanging onto the red metal pipe "bridge"  - step by step and no looking down. It isn't high up, but high enough for the couple we met on the way back to get into trouble when the woman froze halfway across the river.

While crossing the bridge I counted my steps and thought about the piping hot water in the red pipe. This is a geothermal area and I am always wary when visiting such areas. 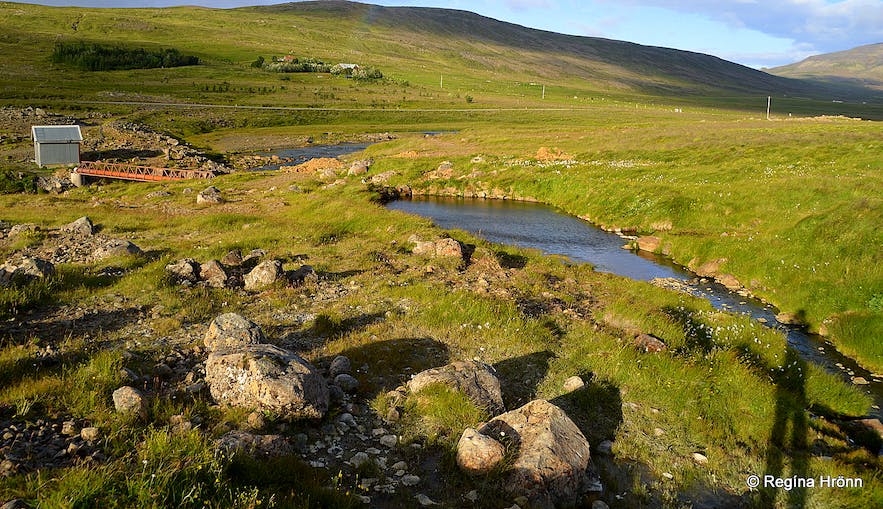 Immediately as we had crossed the bridge we saw a large hot pool - it was only tepid, so I just took a footbath in it. The pool was once used to teach swimming but it is now too cold.

At both Brautartunga and at Englandshver the geothermal water reaches the temperature of a whopping 75-100°C, so the hot water is pumped and used for heating.

It had been sunny, but almost as soon as we reached the hot pools it became cloudy, dark and windy and the temperature dropped. You can see the difference in the two photos taken only 10 minutes apart. 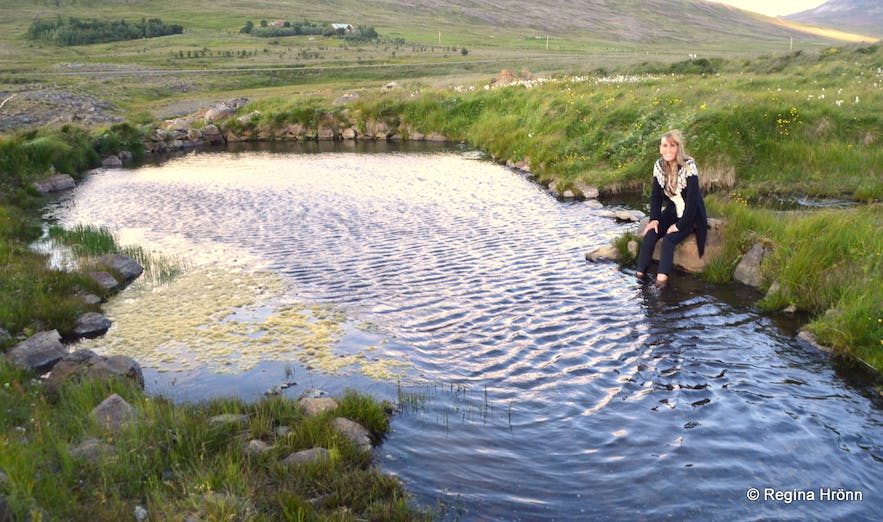 We had been travelling all day long and it was getting late. I know I am a wuss, I should have just jumped in - I will do so next time I visit Englandshver!

We followed the creek further up and saw many places where the water was comfortably warm and would have been an ideal bathing place. It was a bit slimy though but so serene.

It reminded me a little bit of the popular Reykjadalur valley in South-Iceland, where you can bathe in a hot river. My travel-blog on Reykjadalur is by far my most popular, but that also means that Reykjadalur has become crowded. There was nobody at Englandshver on the other hand. 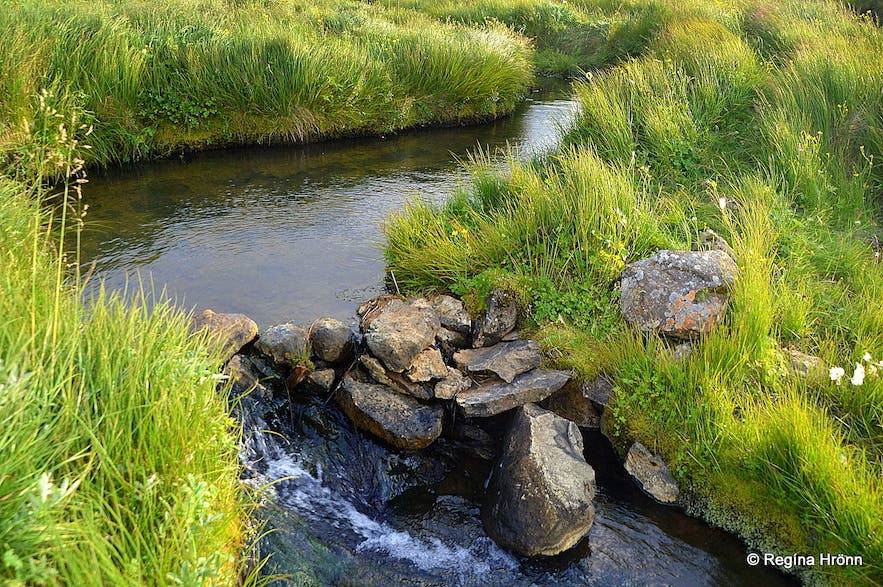 We left after taking a footbath in several places to check the temperature of the water. Now it was time to cross the river on the metal pipe bridge again...

I have seen photos of Englandshver where some people have taken a dip in the river itself beneath the bridge. So that river must be at least tepid. A little bit further you will find a wading spot popular with kids.

I am already looking forward to my visit next summer. Lundarreykjadalur is not far from Reykjavík where I live, so I can just go on a day-trip.

Here you can see the location of Englandshver on Google Maps. 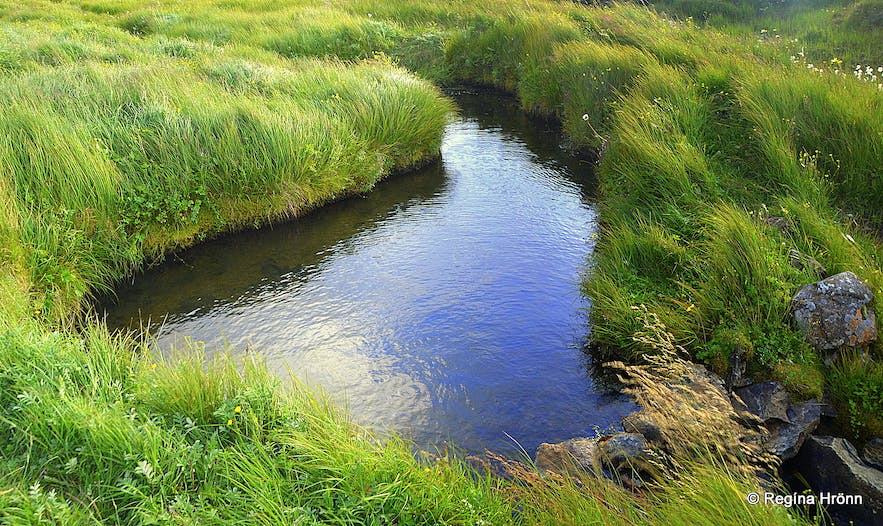 To visit this area it is best to rent a car in Reykjavík and spend a couple of days in this area. I would recommend renting a 4x4 so that you can also visit the beautiful waterfall Hvítserkur, which I showed you in my previous travel-blog the majestic Waterfall Hvítserkur in Fitjaá River in West-Iceland.

The beautiful sights on the Silver Circle are close by - just to sum up a bit what you can see and do here:

The hot pools at Krauma

My next travel-blog is also on West-Iceland and the neighbourhood of Lundarreykjadalur: a lovely hike up Mt. Hestfjall, a visit to Andakílsárfoss waterfall and a dip in Hreppslaug pool.

Have a lovely time exploring the pearls of West-Iceland :)