Bjartmarssteinn Rock in Iceland - the Market Town of the Elves

Did you know that there is a big rock on the southern part of the Westfjords of Iceland where the elves gather together in their market town?  Where they sell and buy and elf ships bring elf goods to Iceland?

Yes, there are many strange things in my country which I regard to be totally normal, as I grew up in Iceland believing in the elves. 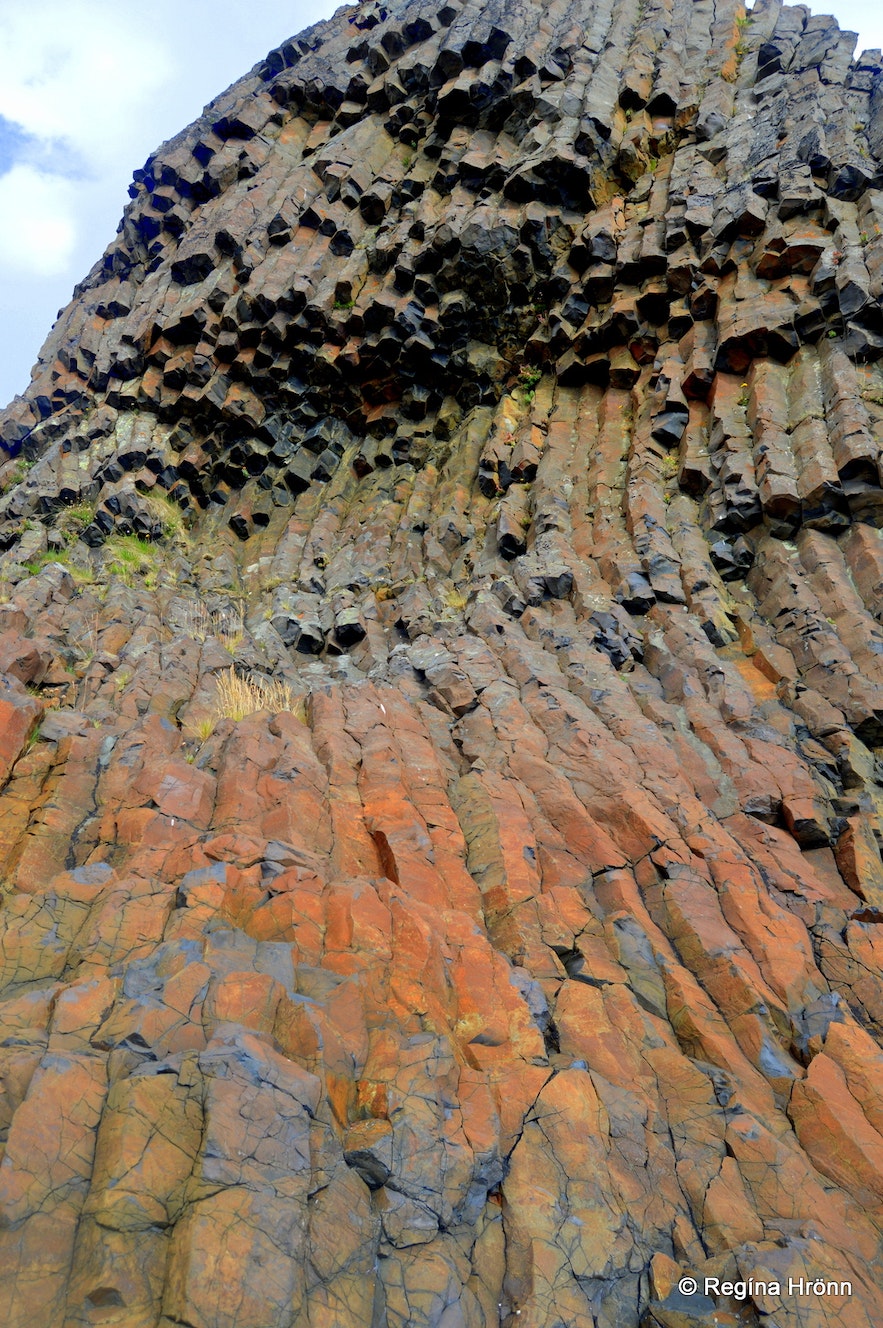 This rock, Bjartmarssteinn, is located east of Reykhólar, the lovely village where I stayed for 3 days and on which I have dedicated 3 travel-blogs. On my last day of my 9-day-stay in the Westfjords, I visited the Market Town of the Elves - the Centre of Elf Business in the Westfjords.

Bjartmarssteinn is a 55-metre tall volcanic plug. This big, almost round basalt rock stands farthest out on Borgarland peninsula, between Króksfjörður and Berufjörður fjords.

You can see the most extraordinary basalt columns in different forms and colour here, made from both basalt and rhyolite. These basalt columns are among the most beautiful formations I have ever seen in my country. This is such a beautiful hidden gem in the Westfjords. 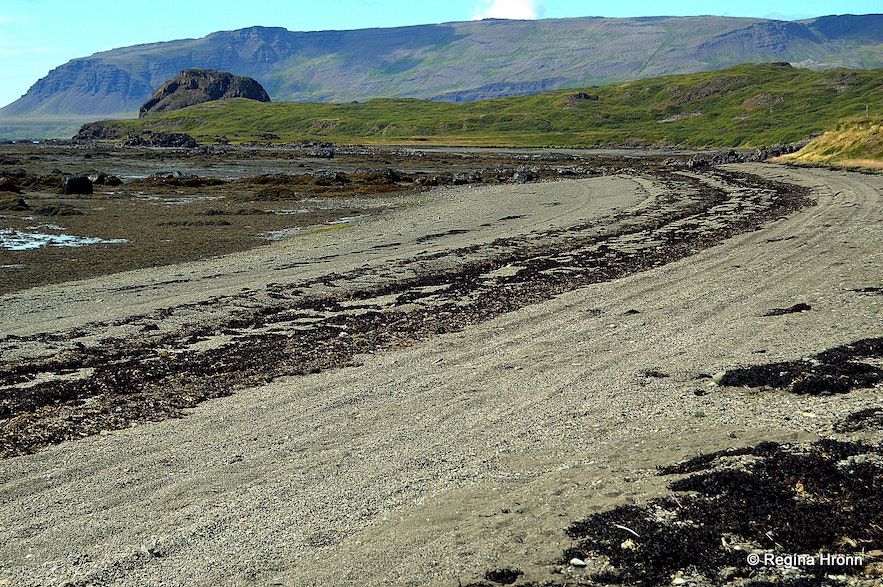 Hiking towards the Market Town of the Elves

These two villages were the largest ones by Breiðafjörður bay. 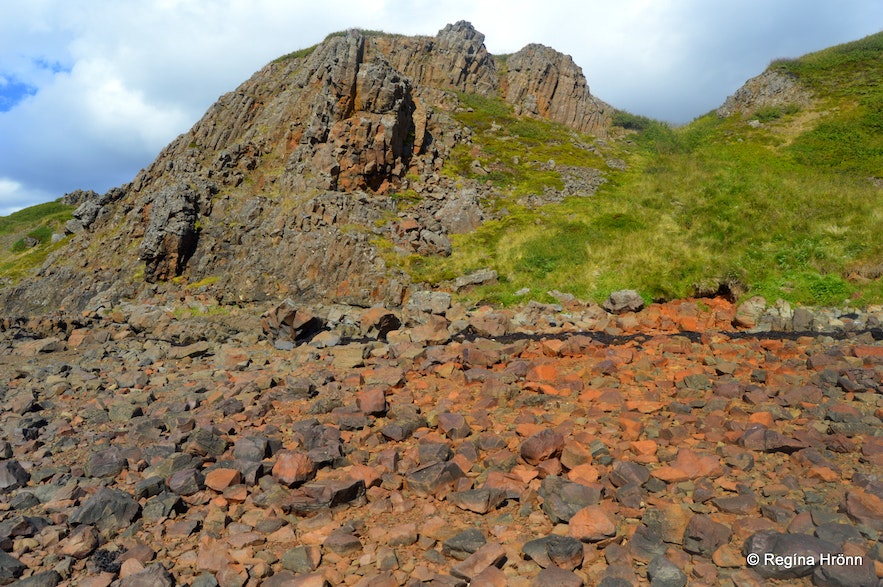 Just imagine how many elves live in this part of the Westfjords - and how many they are in the whole of Iceland - mostly living in harmony with us Icelanders and hidden from most of us.

There is a farm on Borgarland peninsula, called Borg farm. On that farm was a shepherd called Friðrik. He often heard singing coming from the rock and other rocks in this area - particularly on New Year's Eve. 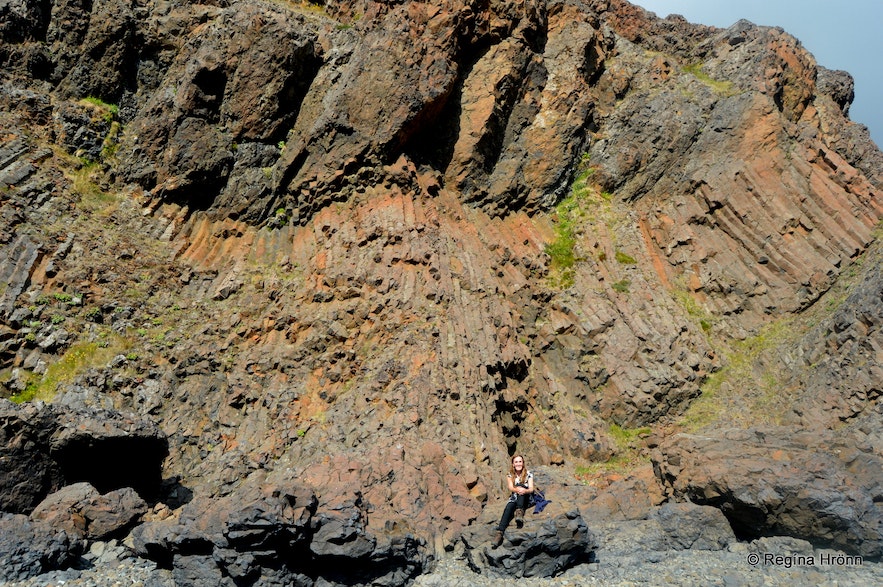 I found an audio account by a local, Karl Árnason, (in Icelandic) recorded in 1970 on Bjartmannssteinn, as he calls the rock, being the elf store in this area. Before Christmas time elf boats could be seen sailing to the store with their goods. This account shows that some of the elves were Christian. 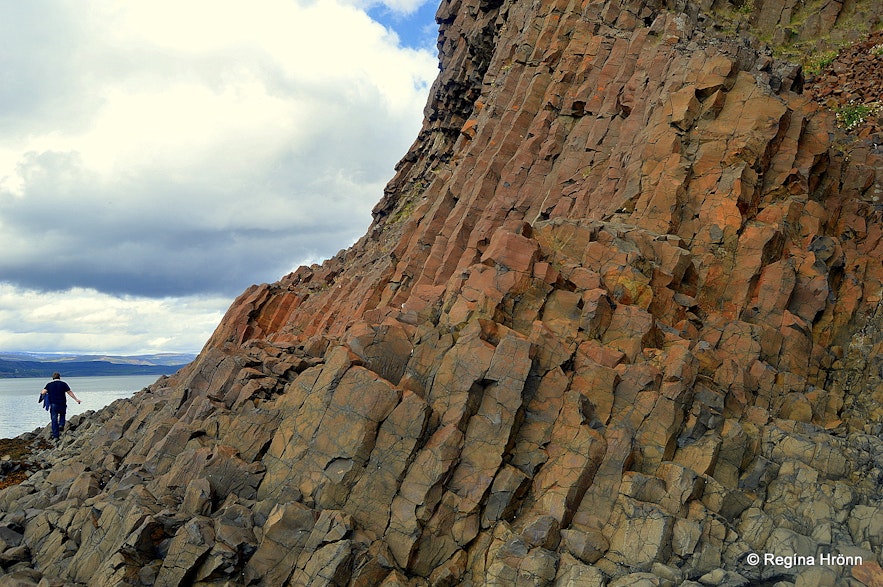 I don't know why the rock is sometimes called Bjartmannsteinn and sometimes Bjartmarssteinn. But seeing that the names are so similar, then this must be the same name  Bjartmar is also a man's name in Iceland.

In an audio account by another local, Ólína M. Magnúsdóttir, (in Icelandic), recorded in 1963, she tells us that the name Pjattarsteinn was what the rock had been called, but then people had started calling it Bjartmarssteinn. I listened to more audio accounts and in one of them, a woman said that she had heard the name Pjattarsteinn in some folklore, but that the rock had been called Bjartmarssteinn. 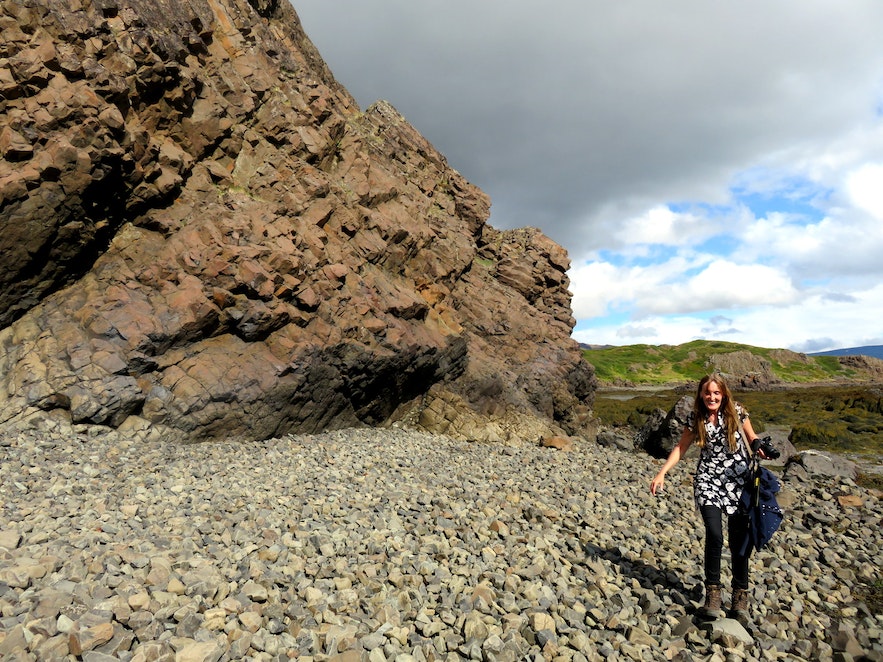 I haven't been able to find an account on Bjartmarssteinn in Þjóðsögur Jóns Árnasonar - the Collection of Folklore of Jón Árnason, which I refer to when I am telling you elf stories from Iceland, apart from the one sentence where it is called Snasi, as I mention earlier. I wonder why as this seems to have been a major elf location in Iceland.

On the other hand, I found a short account in a book called Þjóðsögur og munnmæli - Legend and folklore by Jón Þorkelsson:

"There was a man by the name of Jón Jónsson, nicknamed "kelli mín". He lived in Reykhólar. Once he sailed on a ship in front of Pjattasteinn. He and those who were with him said that they had seen a window on the rock, and they had clearly seen a man inside sitting at a table writing. Jón "kelli mín" was an honest man who told the truth.  Written in Gráskinna Gísla Konráðssonar, who wrote this story in 1850 by Una Loftsdóttir "kerling" from Bær in Króksfjörður".

This man might have been the Sheriff of the Elves as it is believed that he has his offices in Bjartmarssteinn rock. 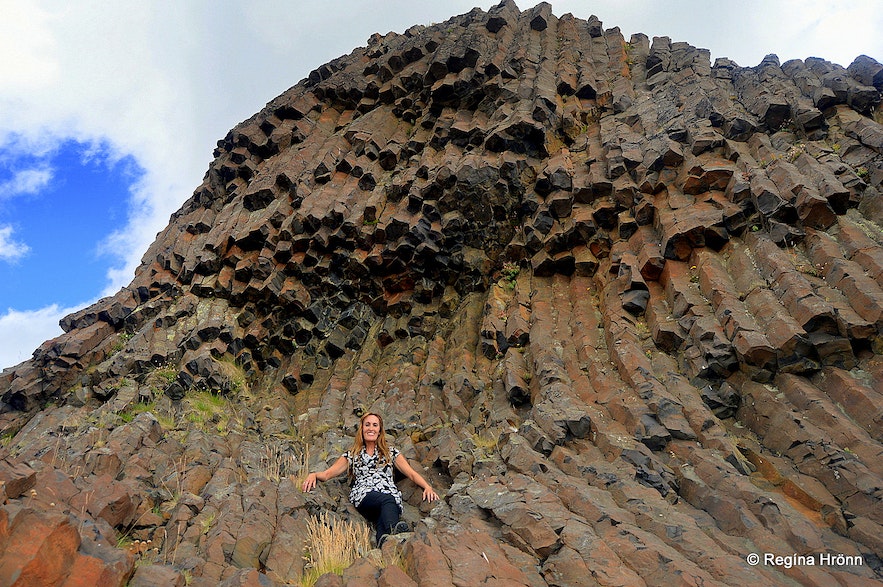 When we visit this rock we are on elf-turf and there might be many elves here. We must show great respect and ask for permission to visit their market town. Elves don't like a racket, so let's talk in a soft voice while visiting.

Also a word of warning - some elves sometimes try to lure people into the rocks with them - don't follow them into an open door in the rock - it might be difficult to get back out of the rock!

Woe to those who try to haggle with the elves! The elves have their own business rules and haggling is considered to be very rude. 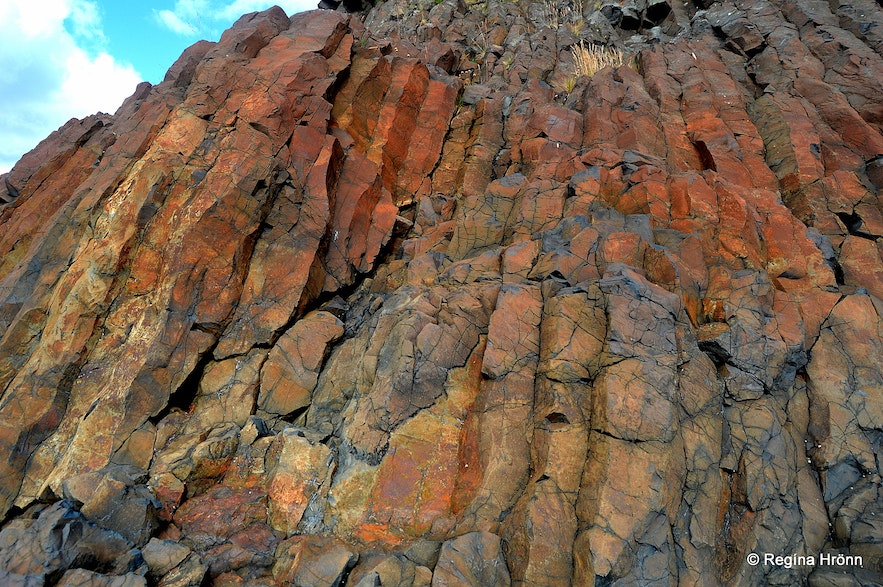 It is best to be at Bjartmarssteinn on a low ebb as then it is possible to walk around the whole rock.  Just watch out for the tide coming in. I was a bit nervous about the tide as I didn't want to be stuck sitting on the marketplace of the elves if I were to be caught by surprise by the tide.

There are some extraordinary basalt formations to be seen on all sites of the rock, but on the west side of it they are simply amazing and remind me of the ceiling inside our National Theatre. 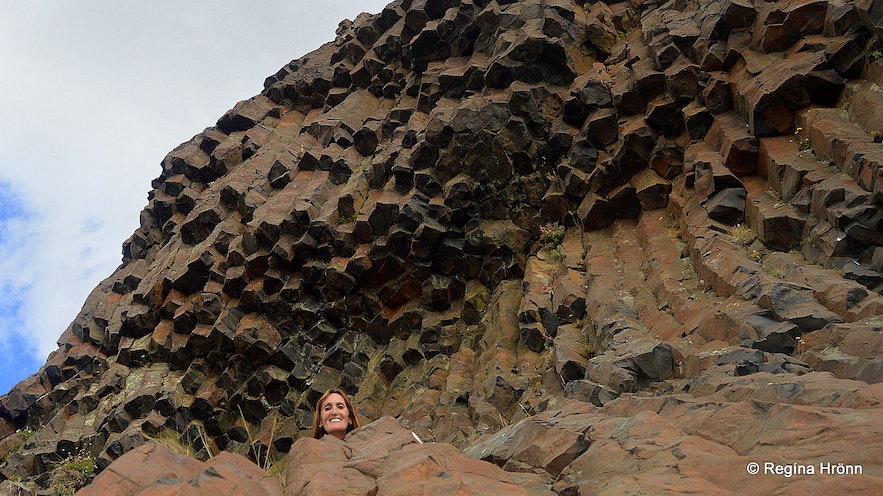 To be able to walk the whole way around Bjartmarssteinn we had to walk on top of some basalt columns, I hope the elves didn't mind ;) When I arrived at Bjartmarssteinn I asked the elves for permission to visit their market town and also asked them to show me some sign of their trading on this spot.

I thanked them for allowing me to visit their area and then walked around Bjartmarssteinn saying WOW in several places as the basalt columns here are so breathtaking; pure art of nature! 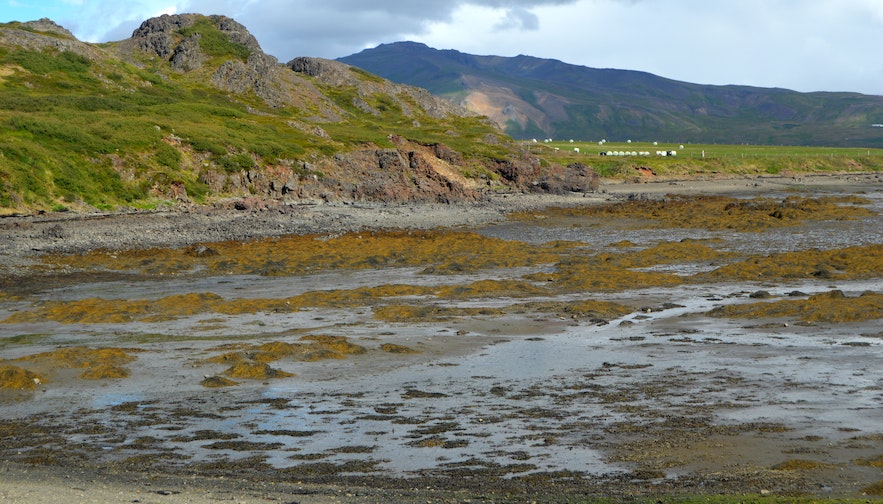 The hike to Bjartmarssteinn takes an hour or so, one way. Be prepared to get attacked by the Arctic tern at the beginning of the hike, so it is good to bring a stick with you. I usually bring an umbrella when I expect an attack from the Arctic tern.

We walked on the shore, which in some parts was very rocky and difficult to walk on. In other parts it was sandy and I found some beautiful rocks with crystals.

You will need good hiking shoes for this hike as the shore is rocky in some parts, and especially while walking around Bjartmarssteinn. As I mentioned earlier then we had to step on some basalt columns for a while to be able to get to the other side. 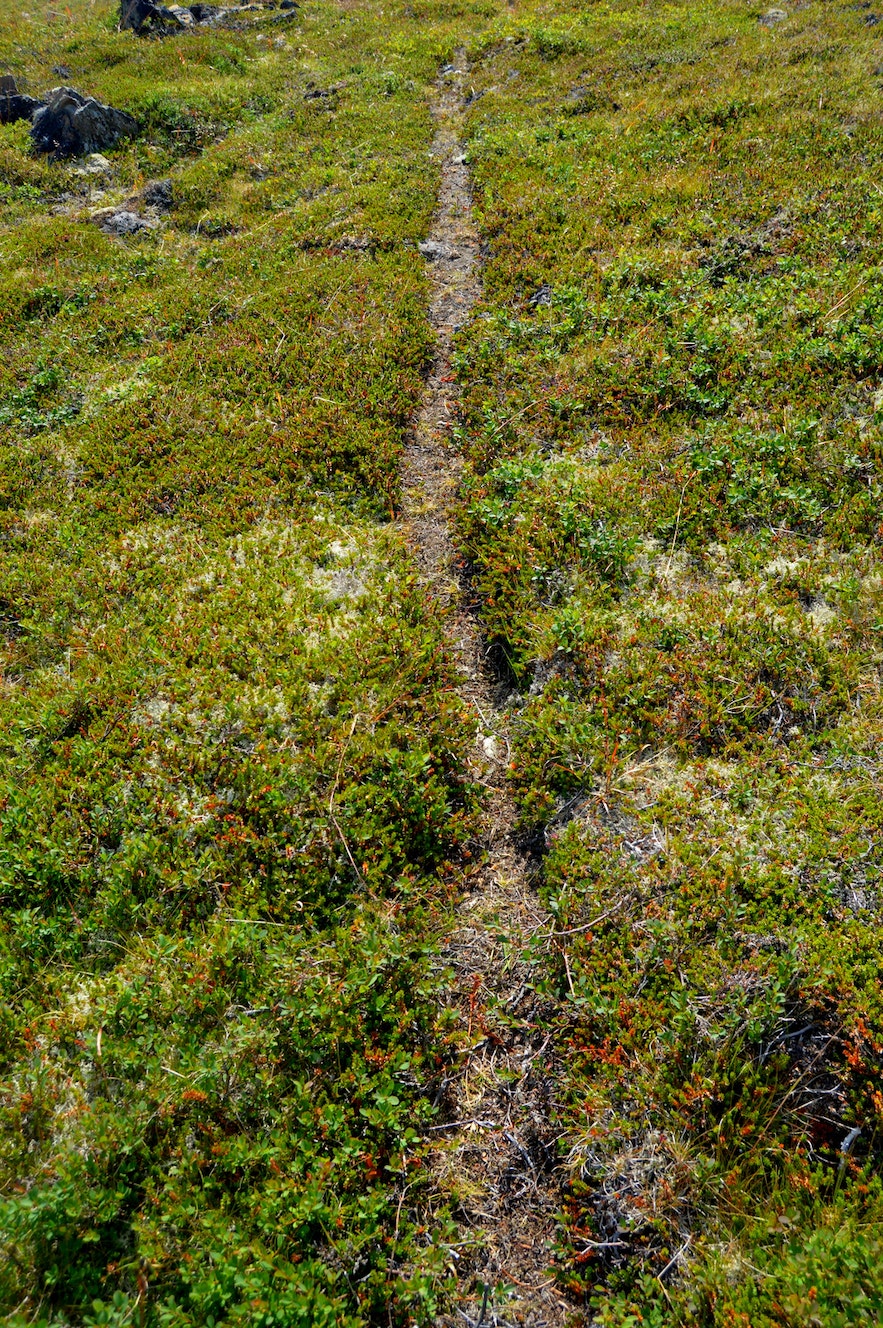 I gave up walking on the shore in one part and followed a narrow sheep path on the hill. You will find these sheep paths almost everywhere in the countryside of Iceland.

That path led me through birch trees where no path was in sight, so I had to fight my way through the birch. Fortunately, the birch trees on this peninsula are not that tall.

Volcanic plugs on the Borgarland peninsula

While driving to the end of the gravel road in the Borgarland peninsula you will see many strangely shaped volcanic plugs. And the very distinct Mt. Vaðalfjöll above this area are columnar basalt plugs.

To reach Bjartmarssteinn rock from road 60, which is the main road on the south part of the Westfjords, turn on road 607 (a gravel road).

Follow that road on the east side of Borgarland peninsula until you pass the farm Borg and drive to the end of the road. From there you will be able to reach Bjartmarssteinn rock by following the shore. 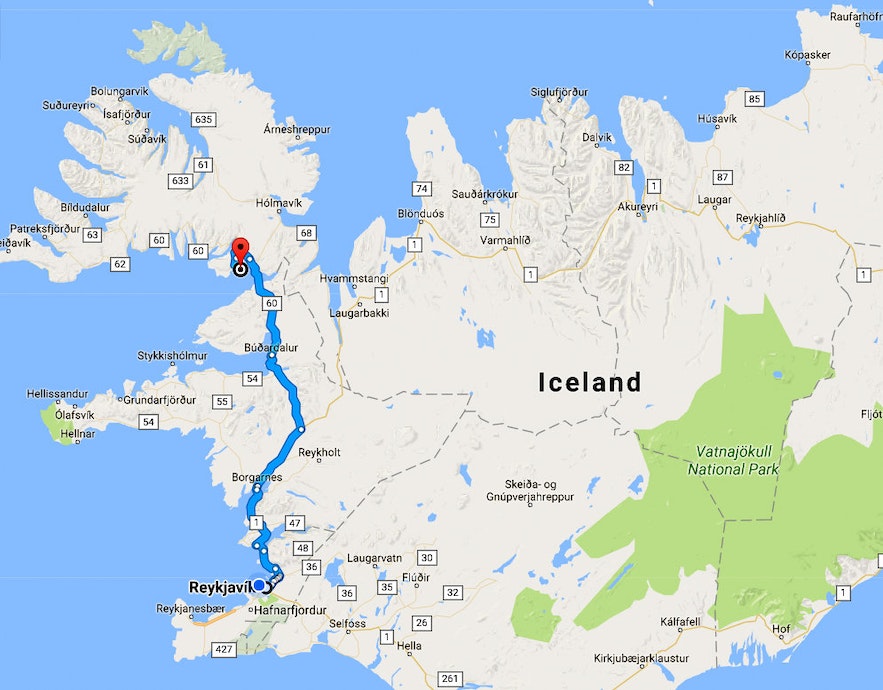 To visit the Westfjords of Iceland you can rent a car in Reykjavík and drive to Bjartmarssteinn in one day.

See also: Three days of fun at Reykhólar in the Westfjords of Iceland  which is a village very close to Bjartmarssteinn rock. I stayed there for 3 days and explored the neighbouring area.

Have a lovely time visiting the Marketplace of the Elves and the beautiful Westfjords of Iceland :)