Hiking on Mt. Hestfjall in West-Iceland - a Visit to Andakílsá River and a dip in a Hot pool

In my last 2 travel-blogs, I have been showing you places of interest in West Iceland. I showed you the beautiful waterfall Hvítserkur and the natural hot springs in Lundarreykjadalur among other places of interest.

Now I am going to show you the view from Mt. Hestfjall and the waterfall in the river Andakílsá, plus a dip in Hreppslaug pool, which gets its geothermal water from a hot spring close by.

Top photo: The view from Mt. Hestfjall - the small hill in the photo is called Fossaborg

This trip was a summer day-tour with friends. I am not an avid hiker, but I joined the group for an easy hike up Mt. Hestfjall - the Horse Mountain in Borgarfjörður in West-Iceland.

Several mountains in Iceland bear this name. Mt. Hestfjall in Borgarfjörður is a 221 metres high mountain, the end of which lies between Lundarreykjadalur and Skorradalur.

On top of Mt. Hestfjall

I found Mt. Hestfjall to be fitting for my 3rd and last travel-blog in this series on Borgarfjörður, given that my 1st travel-blog is about Skorradalur and the 2nd one is on Lundarreykjadalur. We hiked up the eastern part of the mountain, where it is easy to hike.

The northwest part of Mt. Hestfjall, on the other hand, is craggy.

Mt. Hestfjall is named after Hestur farm in the vicinity, but Hestur farm is an experimental farm on sheep herding.

A group photo on top of Mt. Hestfjall

We started from that farm in the north and hiked on top of the mountain with a few stops on the way. I am always glad for such stops as I can walk for hours on the even ground, but when I have to walk uphills then I am in trouble. That is why out of 280 travel-blogs I only have 1 on a mountain hike - this one ;)

It took us 1.5 hours to reach the top of Mt. Hestfjall from the farm. It is a relatively easy hike, but quite rocky.

And what a view! From here we could see the mystical Snæfellsjökull glacier by the horizon, but the Snæfellsnes peninsula is a very popular place to visit with a myriad of sights.

I also spotted the cone-like Mt. Baula, Mt. Hafnarfjall, Skarðsheiði, and Skessuhorn, Hvanneyri, and Borgarnes. Borgarfjörður for sure is one of the many beautiful places in Iceland. From here was also a good view of Lake Skorradalsvatn which hides a serpent called Skorradalsormur.

A part of the group ventured on the very top, amongst them my father-in-law, who is a renowned mountain goat.

I took a video, but it, unfortunately, didn't capture the mountain view.

After spending some 35 minutes on top of Mt. Hestfjall enjoying the view, we started descending - it is a rocky path so proceed with caution. I stumbled down the mountain, far from elegantly ;) I tend to tense up on rocky terrain, still, I am always forcing myself to venture further.

Big rocks, which have fallen down from the mountain create a cluster of trolls - they are called Karlar or the Men, but such rock formations are often referred to as Karl and Kerling - meaning the Troll and the female Troll. Loads of folklore have been written about the trolls in Iceland. 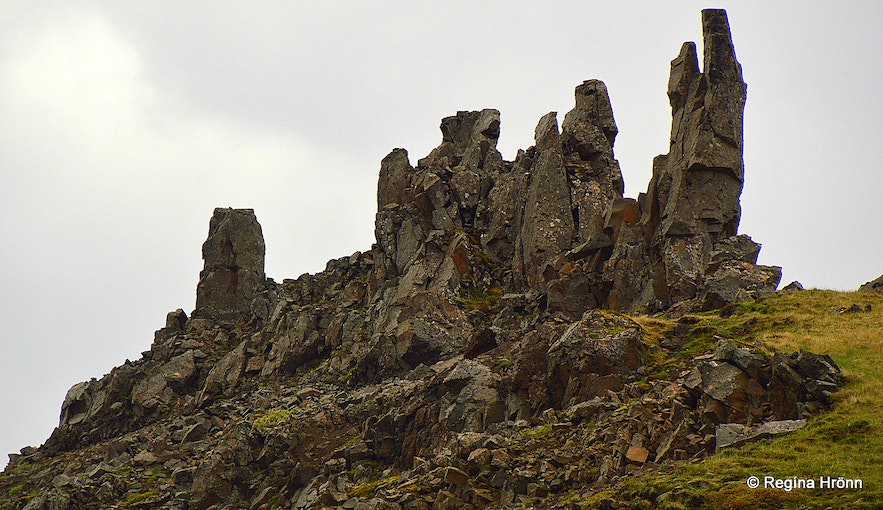 On the way, shortly after we had descended from Mt. Hestfjall we saw a herd of horses running eagerly towards us from the distance. We stopped as this was an unusual sight.

They came running so fast that the earth trembled. And straight towards our group!

We took photos left and right as this was such a beautiful sight, all these horses with the fluffy manes fluttering in the air.

What a treat this was after having visited Mt. Hestfjall - the Horse mountain!

What the horses were after was our packed lunch ;) They sniffed in all our pockets and managed to get a bite or two. 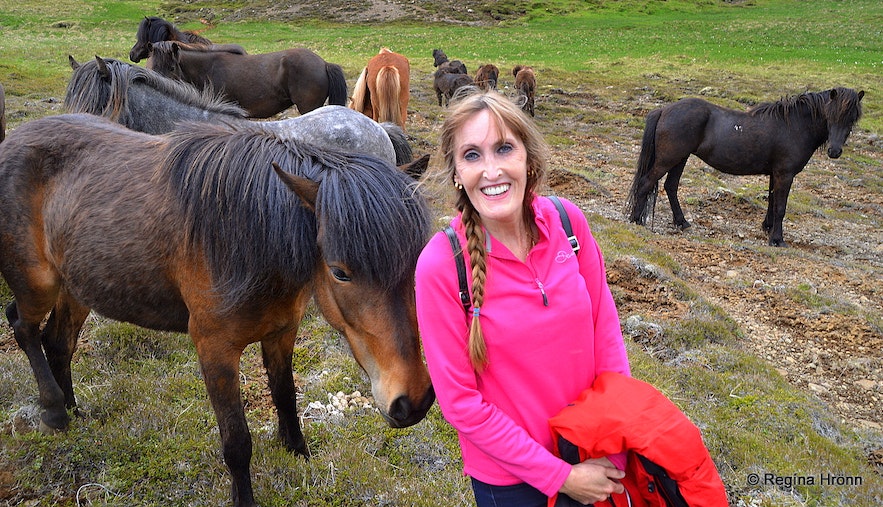 One of the horses sniffing my pockets for bread

The whole herd then joined our hike, they just mixed in with the group like it was the most normal thing to do.

We were delighted to have this beautiful company. After a long while, they left and others joined us. 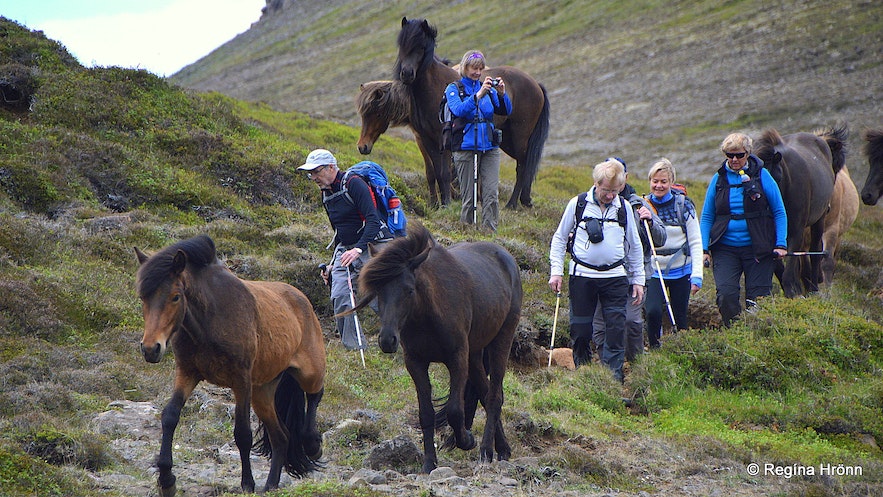 We crossed road 508 on foot, but that is the road to Skorradalur and Hvítserkur waterfall. 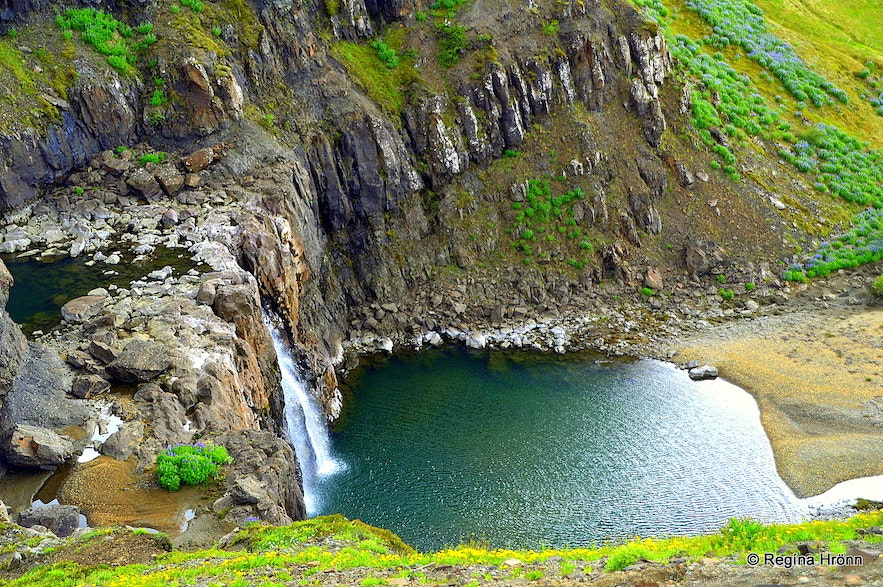 In a previous travel-blog, I showed you the beautiful off the beaten track waterfall Hvítserkur which runs in the river Fitjaá and into Lake Skorradalsvatn from the east side. The rock stream Andakílsá river runs from the west side of Lake Skorradalsvatn.

In 1947 Andakílsá was harnessed with a dam (miðlunarstífla) by the reflux of Lake Skorradalsvatn. There are several waterfalls in Andakílsá river, Andakílsárfossar waterfalls, but they were just a trickle on the day of our visit since the river is harnessed. 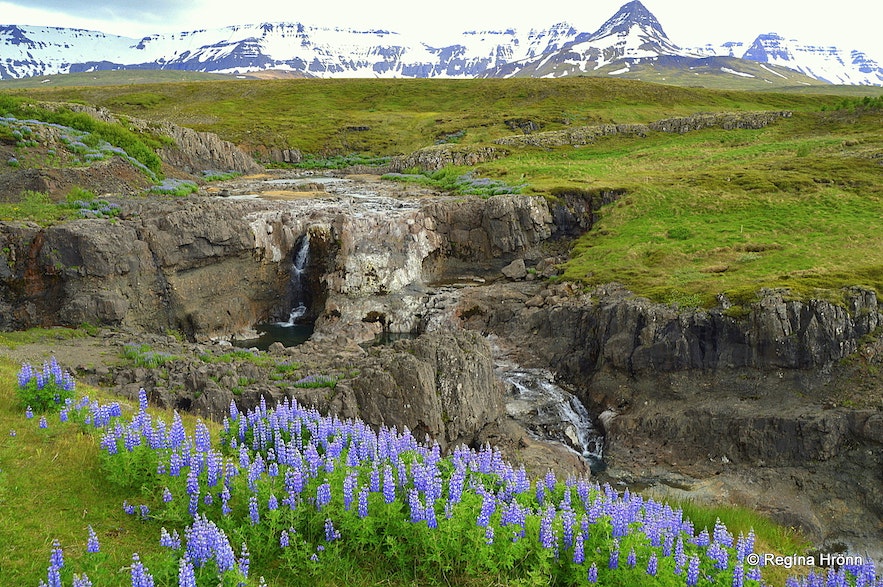 We checked out the intake reservoir and the dam and then hiked by the riverbed. It must have been a sight to see when the waterfalls came cascading down the river. Now only the waterworn rock remains, still very pretty.

When ON - Orka náttúrunnar, the owners of the dam, emptied the lagoon back in 2017, the dire consequences were not foreseen. Around 10,000 thousand cubic metres of sediments and mud flooded from the intake reservoir by Andakílsvirkun into the river, filling it with abiotic mud.

It is so sad that this resulted in such an ecological disaster. 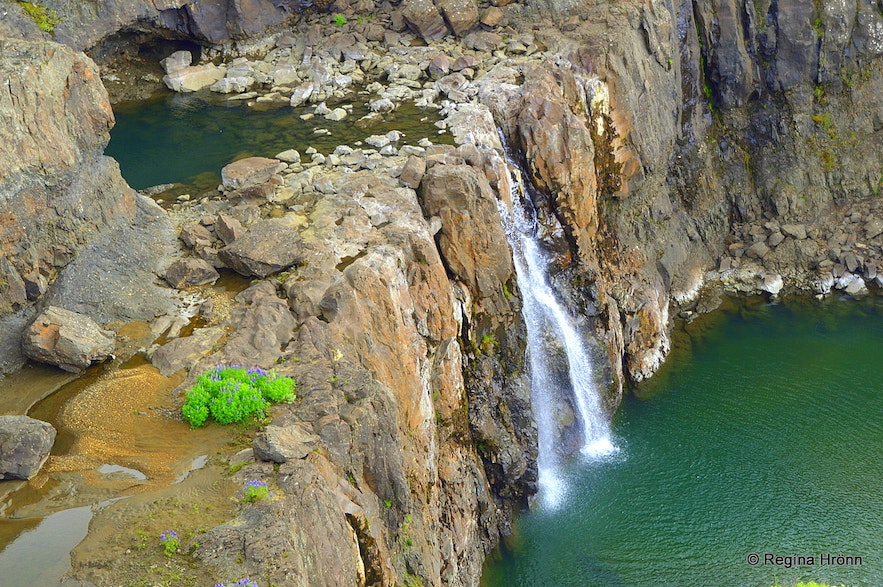 The fishing spots in this popular river were ruined and there is no saying when its biota will turn back to normal.

There was no salmon fishing in Andakílsá river in 2017 and 2018 and there will be none until 2020 if all goes well, but both small salmon and sea char could be caught in the river. Fortunately, fishing in the Andakílsá river was possible again in the summer of 2020.

Around the middle of the last century, some huge salmons were caught in Andakílsá.

After a 10 minute walk, we reached a pretty waterfall in the river, Andakílsárfoss waterfall, which cascaded in two separate, but equal waterfalls into a pool. Such a pretty spot.

We had been walking on the edge of the gorge and had by now reached the power plant. 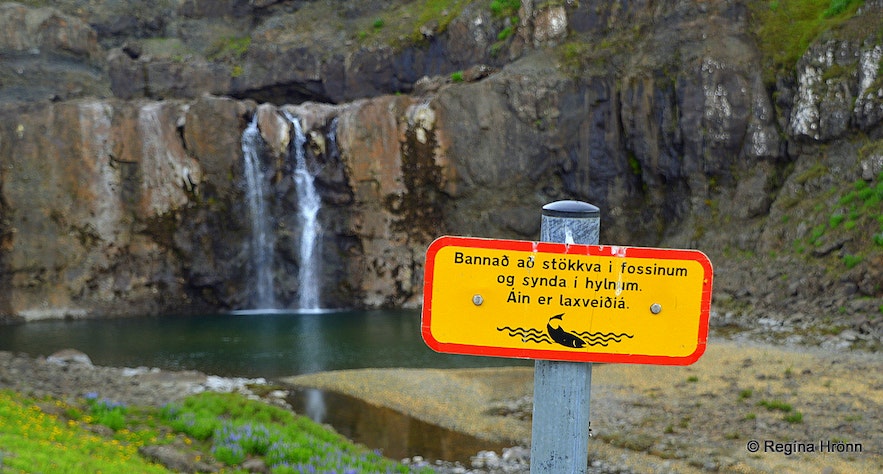 A sign by the waterfall warns of not jumping in the waterfall and swimming in the pool beneath it, as the river is a salmon river. This was not the case though when we visited because of the accident by the dam.

Andakílsá river runs from Lake Skorradalsvatn and into the mouth of the 117 km long glacial river Hvítá in Borgarfjörður before it joins the sea by Borgarfjarðarbrú bridge.

Further up Hvítá in Reykjadalur valley we find Hraunfossar waterfalls, which fall into Hvítá river and are counted amongst the most beautiful waterfalls in Iceland. 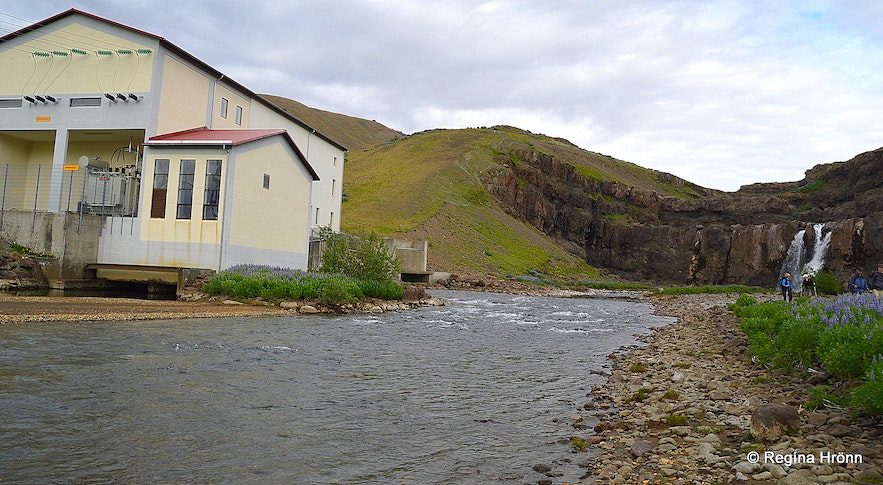 Crossing the river by Andakílsárfoss waterfall

The English translation: "To Grim the Halogalander he (Skalla-Grímur Kveldúlfsson RHR) gave dwelling-place south of Borgar-firth, on the shore named Hvann-eyrr. A little beyond this a bay of no great size cuts into the land.

There they found many ducks ("endur" in Icelandic RHR), wherefore they called it Duck-kyle, and the river that fell into the sea there Duck-kyle-river. From this river to the river called Grims-river, the land stretching upwards between them Grim had". 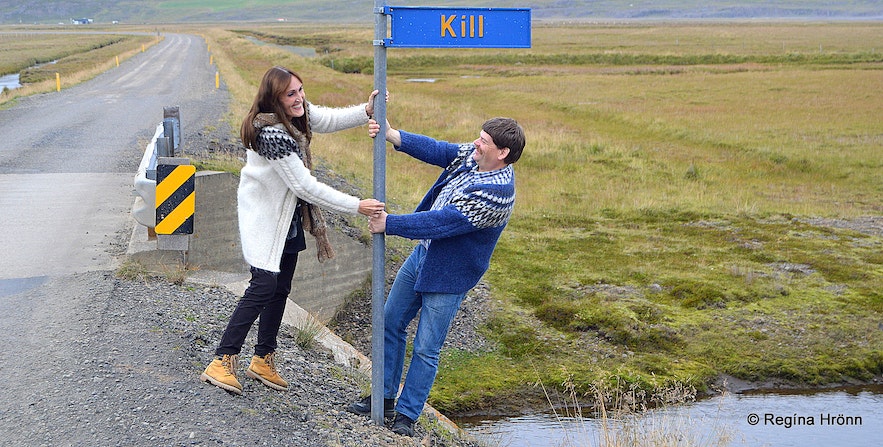 The river Kíll in East-Iceland

The Icelandic word kíll does not have the same meaning as the English word kill. Kíll in Icelandic means a deep and calm stream. So now you know and won't get startled when you see the sign Kíll by a river in Iceland ;)

Read up on Egill Skallagrímsson and the 9 cairns in my travel-blog about Egill.

It was now time for some relaxation after the hike and a dip in Hreppslaug pool hit the spot. Hreppslaug is close by, but we had to cross Andakílsá river by stepping on stones and walk for a short distance to the pool.

Hreppslaug gets its geothermal water directly from hot springs next to the swimming pool. It was built in 1928 and is now preserved. It is run by the Youth Organization Íslendingur. Several hot pools in Iceland are run by youth organizations, like Brautartunga, which I showed you in my last travel-blog. 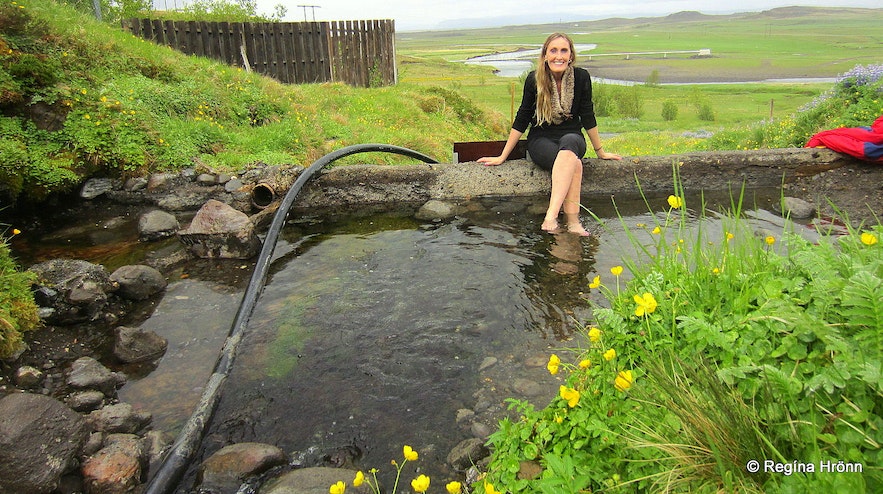 Hreppslaug is only open in the summertime, but you can visit the hot springs behind the swimming pool and take a footbath in the warm river. 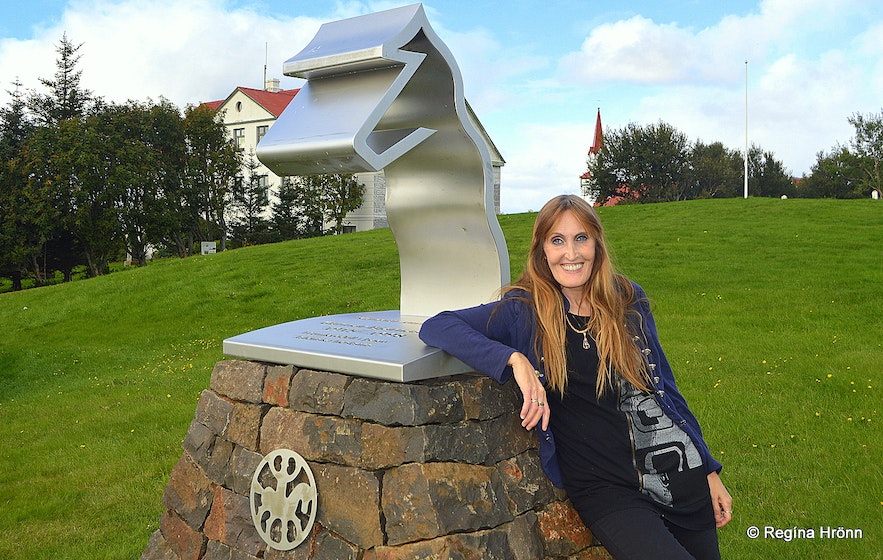 By the monument Eiðfaxi, erected for my great-uncle Gunnar Bjarnason at Hvanneyri

Close by you will also find Hvanneyri, a small agricultural community of around 250 people, and Hvanneyri Agricultural University, which I will show you in another travel-blog. In the meantime you can check out some other travel-blogs I have written on what there is to see and do in Borgarfjörður:

The Silver Circle - a guided tour in a modified jeep

The spectacular Silver Circle of Iceland

Hvanneyri is at an 83 km distance from Reykjavík via Hvalfjarðargöng tunnel. It is best to rent a car in Reykjavík and explore this area on your own. Just remember that a 4x4 is needed for Hvítserkur waterfall on road F-508.

Have a lovely time in West Iceland :)