Visiting folk museums is something I love doing on my travels in my country. You will find an excellent district museum in South-Iceland, a 2 hours drive from Reykjavík, which I recommend visiting - Skógar Museum (Skógasafn in Icelandic).

At the museum, you will see a turf house, but as those of you, who have read my previous travel-blogs, know - then I love turf houses and seek them out on my travels in Iceland. 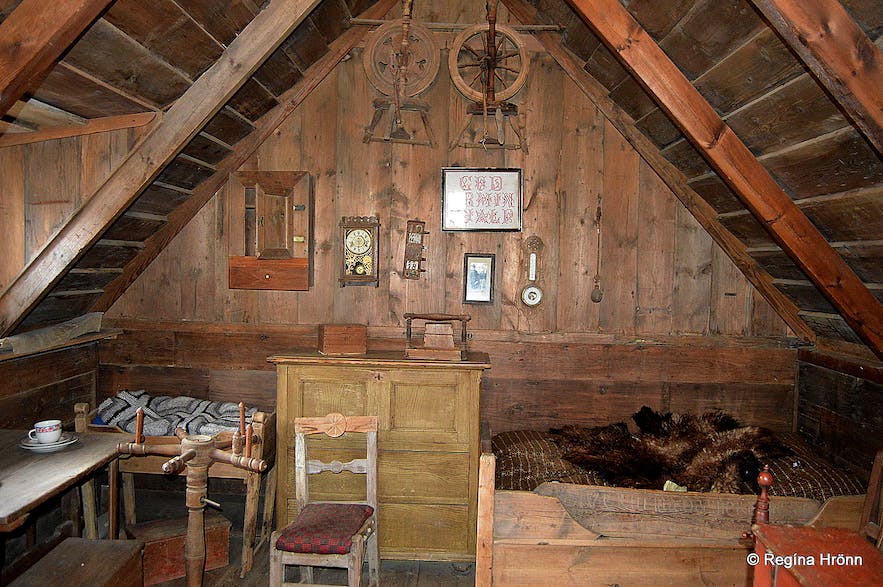 I have written many travel-blogs on the few turf houses left in Iceland as I want to introduce to you this old architectural heritage, which was the traditional way of building houses in Iceland from the early days of Settlement until the last inhabitants moved out of them in the mid 20th century.

The turf house at Skógar Museum is different from other turf houses in Iceland in that it is a reconstruction of several turf houses from different places in this area.

This cruciform cowshed dates back to 1880, storehouse from 1830, "baðstofa" which is the living/sleeping accommodation dates back to 1895, kitchen from 1880, pantry from 1850, sitting room from 1896 and bedroom from 1838. All of them are fully furnished, so one can see how people used to live in the olden days.

Skógar Museum is a relatively old museum, it opened in 1949, and I first visited it when I was 6 years old in 1971 when the very knowledgeable Þórður Tómasson showed us around the museum. I guess my interest in folk museums got ignited at Skógar Museum when I listened to a very enthusiastic Þórður tell us about all the artefacts at the museum :)

Þórður was the instigator, founder and the curator of the museum for 64 years until he retired in 2013 at age 92! Kudos to him for a job well done - I am very grateful to him for having collected all these artefacts through the years. He is also the author of many splendid books on this area. 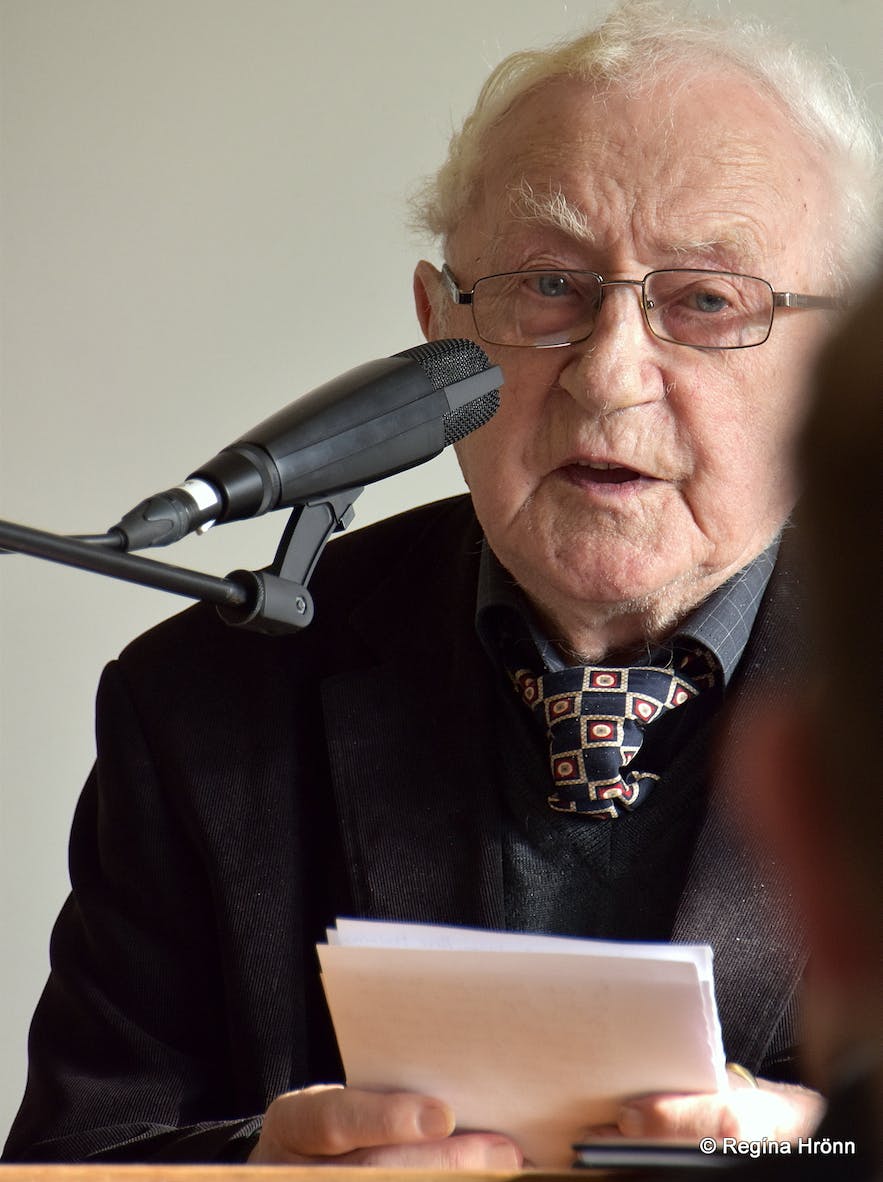 On the 70th anniversary of Skógar Museum, which I attended in the fall of 2019, Þórður (now 98 years old) held a speech and was applauded for his prolific work.

I visited Skógasafn - Skógar Museum on their 70th anniversary as this museum with all its brilliant artefacts is very dear to me. 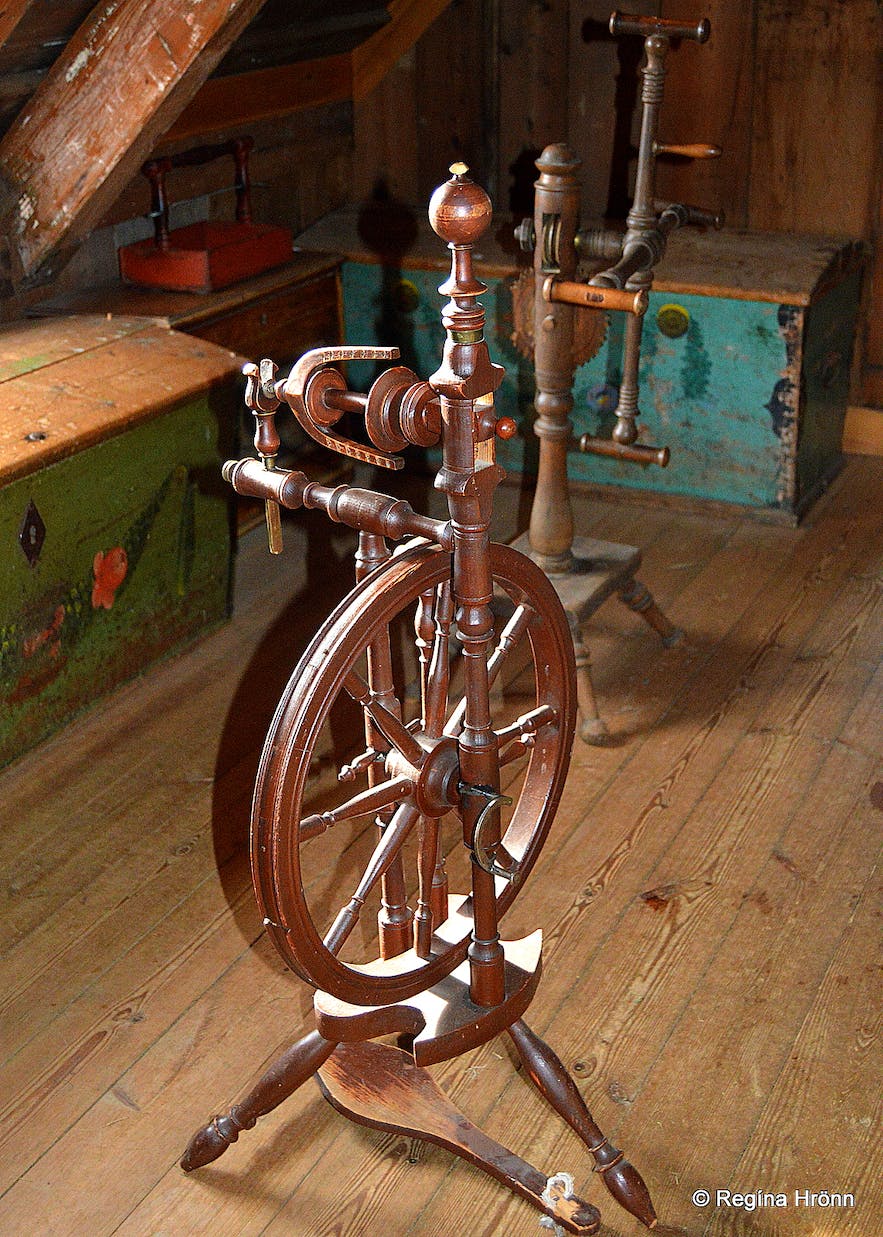 In the beginning, the artefacts used to be on display in the summertime only in the classrooms at the schoolhouse at Skógar, which served as a hotel in the summertime, so it started out small. I have stayed at this hotel several times and have good memories from this beautiful place.

Þórður collected more and more artefacts from this area of South-Iceland and in 1952 a whole fishing-boat, built at and named after the farm and mountain, Pétursey, was donated to the museum - so new facilities were needed for the museum. Pétursey fishing-boat is now the jewel in the crown of Skógar Museum. 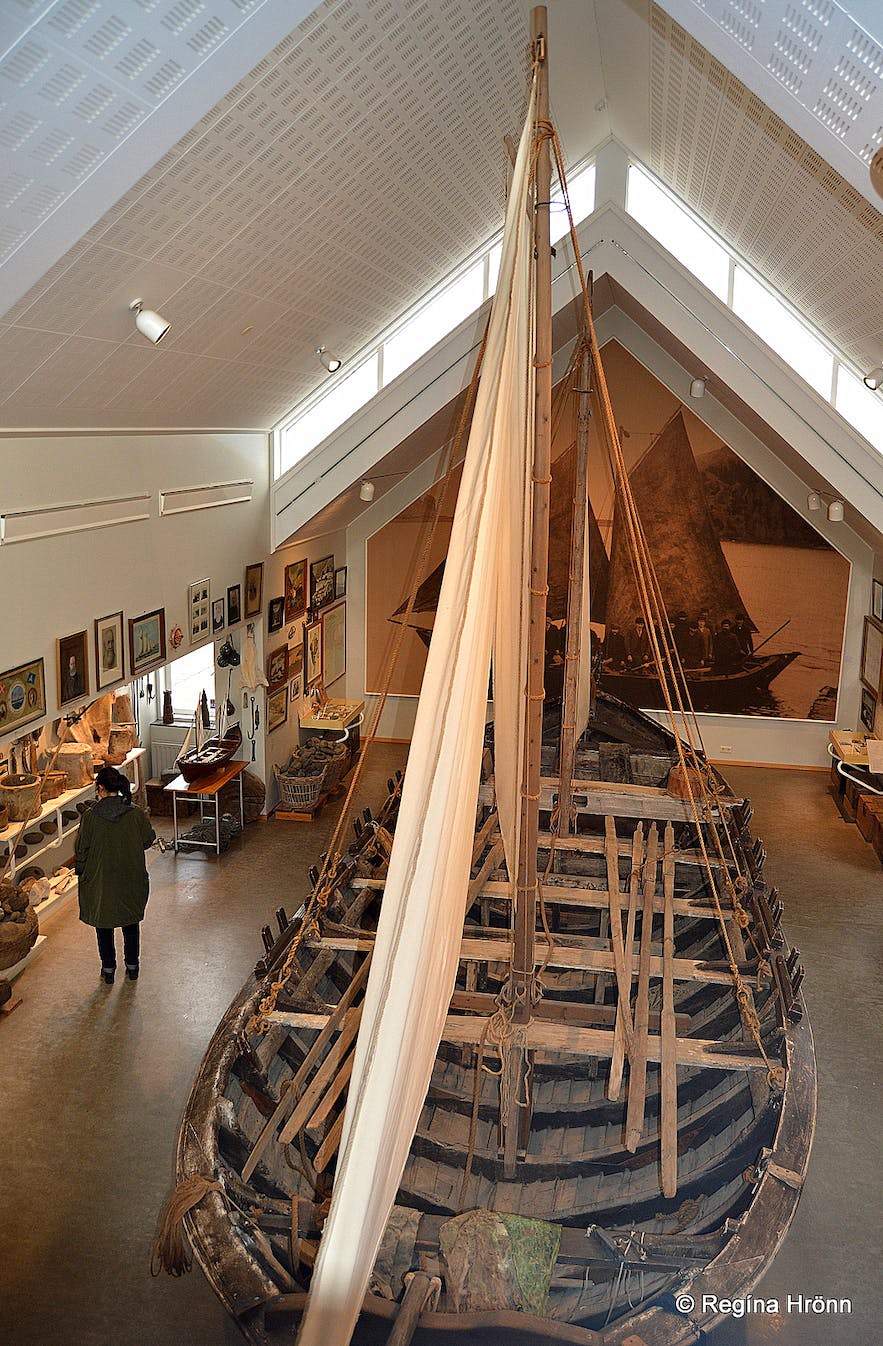 Apart from the beautiful turf house at Skógar Museum, there is a school building from 1901 and a Magistrate's House built in 1878 out of drift-wood. Next to it is a farm-house, built in 1919-1920 with a turf storehouse from 1870.

All of which have been moved from different places in this area of West-Skaftafellssýsla and Rangárvallasýsla counties and reconstructed at the museum. 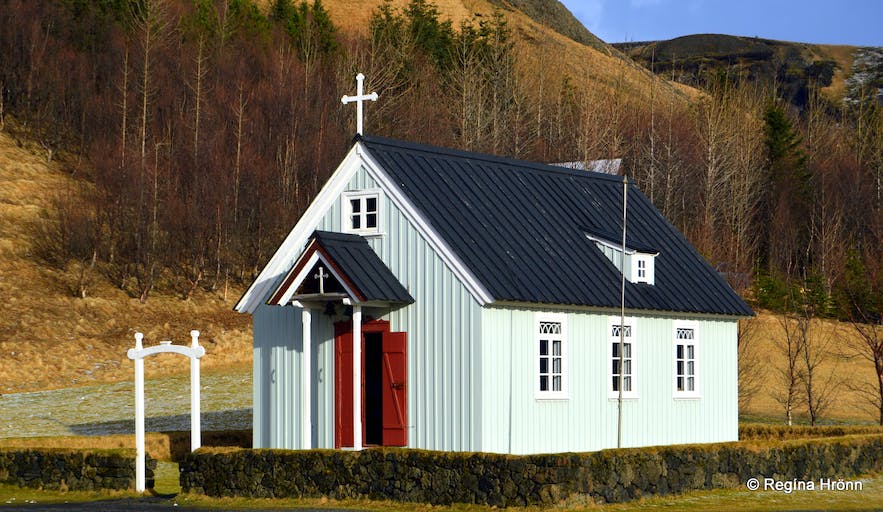 You will also find Skógar Church, which is new (1998) on the outside but the interior is old from the Kálfholt church, built in 1879, and all the ecclesiastical artefacts are from different churches from the 17th-18th centuries. The beautiful triptych dates back to 1768.

Most of these churches do not exist anymore, f.ex. one of the church-bells was saved from a church during the volcanic eruption of the notorious volcano Mt. Katla in 1660.

I visit all the farm churches I see on my travels in Iceland as I love these little gems. 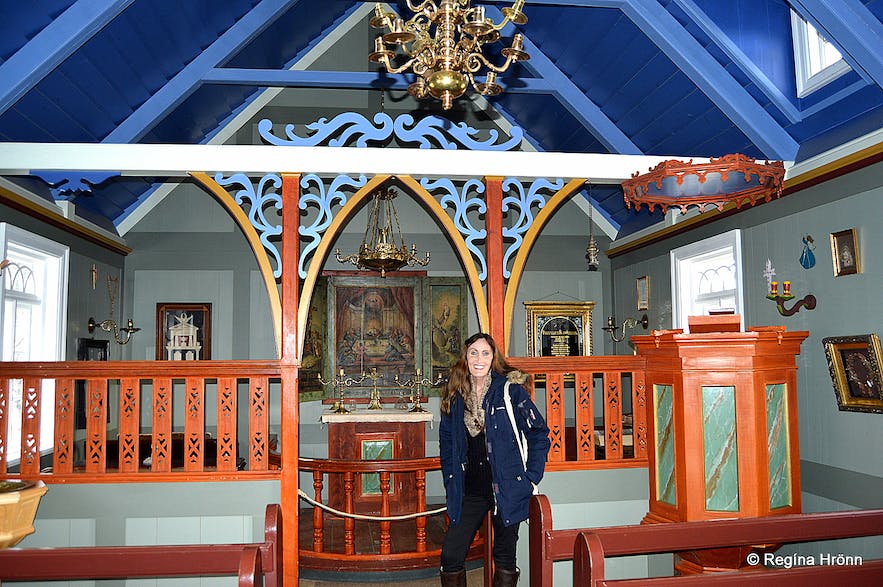 After visiting the open-air part of the museum, we visited 3 other inside museums with some 18,000 artefacts collected from this region!

At Skógar Museum you will amongst other things find an artefact which is connected to the legend of the majestic Skógafoss waterfall. It is believed that behind it you can find a chest filled with gold and precious treasures.

Þrasi Þórólfsson, the Viking Settler at Skógar (Eystriskógar) in around 900, hid the chest and it is said that the first man who goes behind the waterfall will find great treasures. 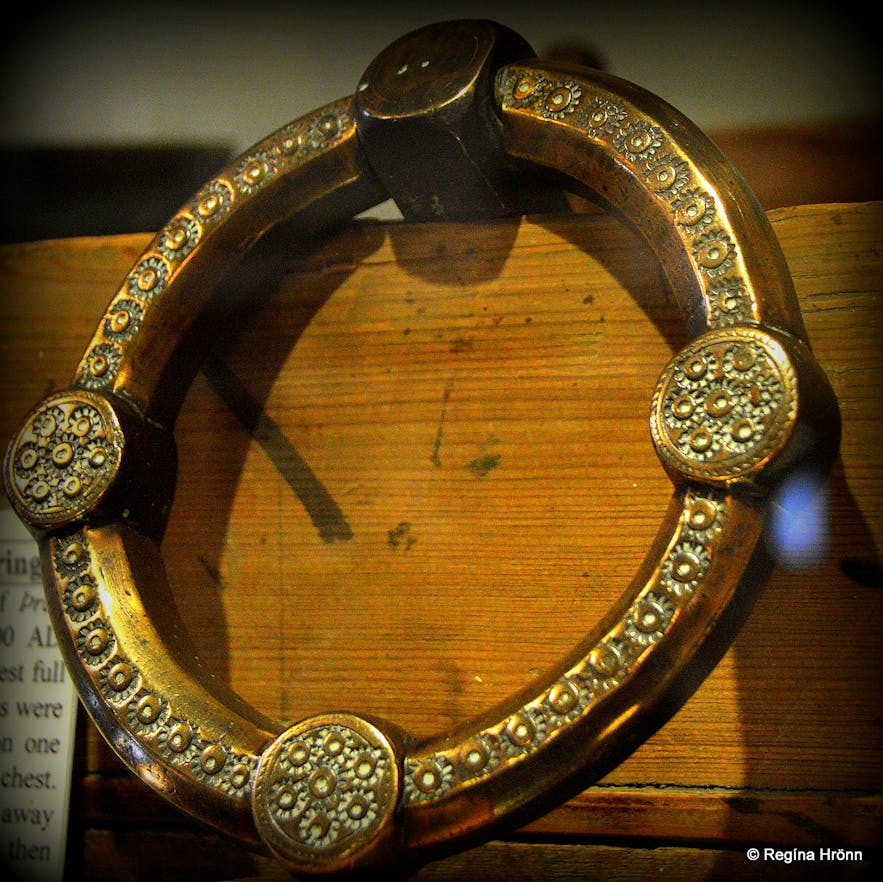 The legend goes that Þrasi, who owned a chest filled with gold and treasures, had put the chest beneath Skógafoss waterfall, and in olden times one could see one side of the chest protruding from the waterfall.

There is an old Icelandic rhyme, which goes like this in English: 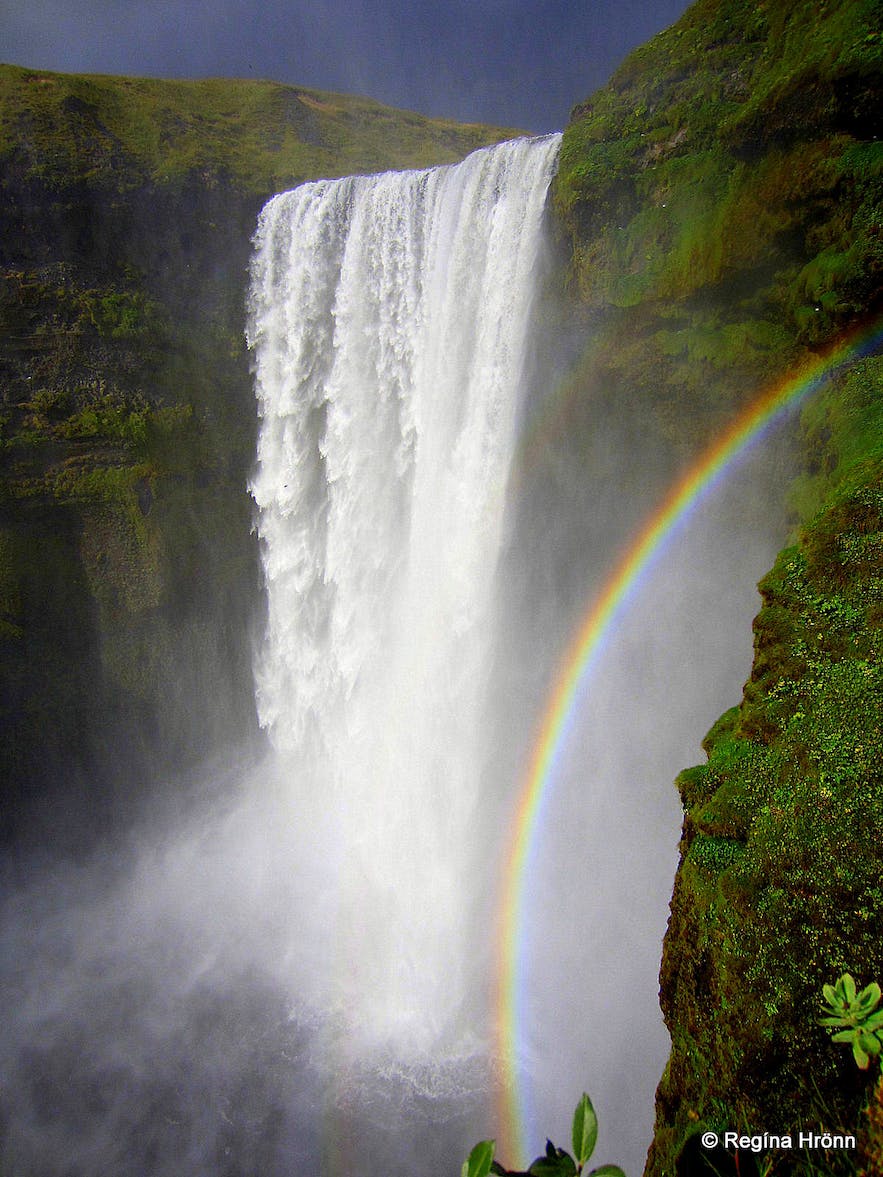 The story goes that there were once three men at Skógar, the sons of Ámundi Þormóðsson. They wanted to retrieve the chest from beneath the waterfall. All of a sudden they looked in the direction of the farm, and it appeared to be on fire - they decided on returning back, only to find that there was no danger apparent on the farm.

But as they were about to pull the chest towards them they jerked the ring off the chest, but the chest got left behind. The story goes that the ring is now located in the church door at Skógar". 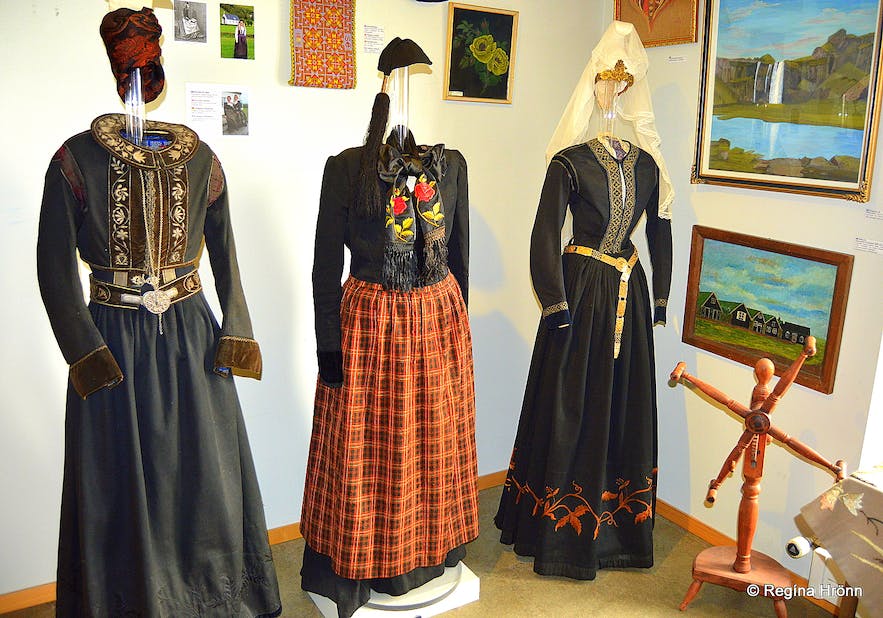 There are myriads of interesting artefacts at Skógar Museum. Including the old national costumes which were worn in Iceland by women in the olden days.

I always like this part of the folk museums where ever I go in the world, seeing how people were dressed in the olden days. And there are some gorgeous national costumes on display at the museum. 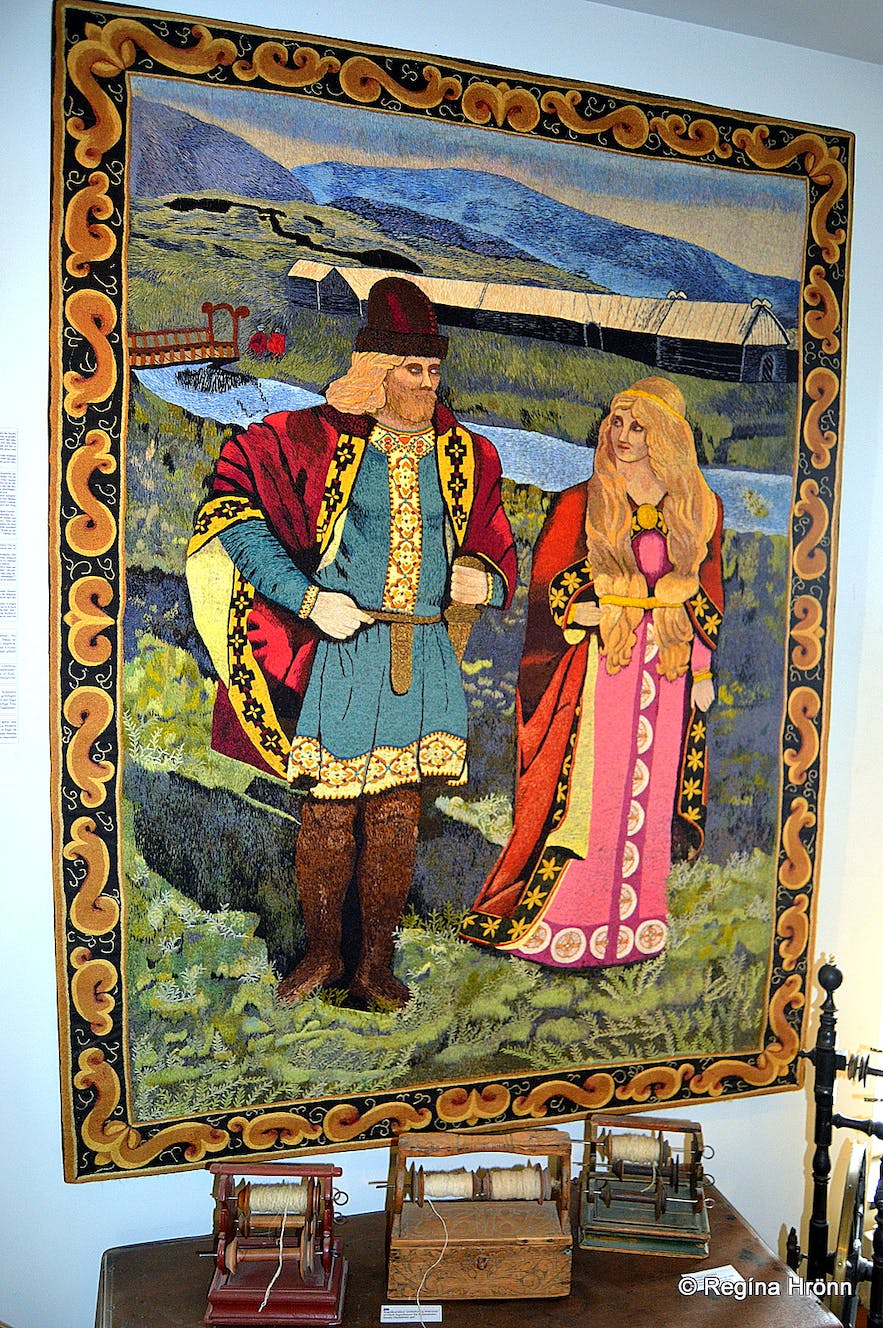 Amongst all the myriad of beautiful artefacts and books and old Bibles, jewelry and personal belongings of people in this area there is a big colourful tapestry depicting one of the heroes of the old Icelandic Sagas - Gunnar at Hlíðarendi and his wife Hallgerður langbrók. His story is told in the Saga of Burnt Njáll, which happened in South-Iceland.

A guided tour is available of the most important locations of the Saga of Burnt Njáll: The Vikings and the Sagas - a fun and educational tour of South-Iceland.

Sigríður Einarsdóttir made this eye-catching tapestry at Dufþaksholt - it is a pure gem as so many of the artefacts at the museum.

Gifts from the Hidden People 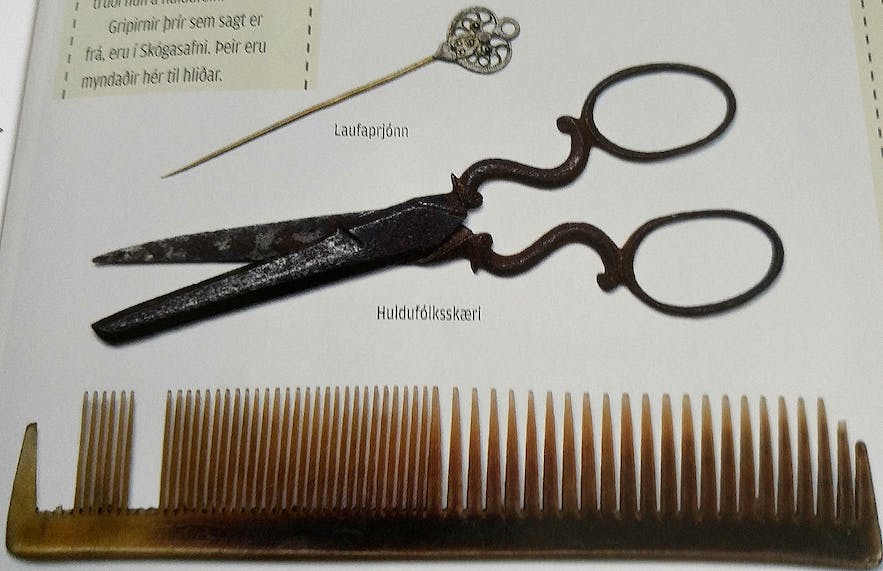 So the curator of the museum gave me permission to publish a photo from their museum guide (see the photo above).

A couple of months later, when I next visited the south coast of Iceland, I popped in at Skógar Museum to get a photo of the gifts from the hidden people. The very knowledgeable lady working at the museum showed me where these hidden people artefacts were to be found. 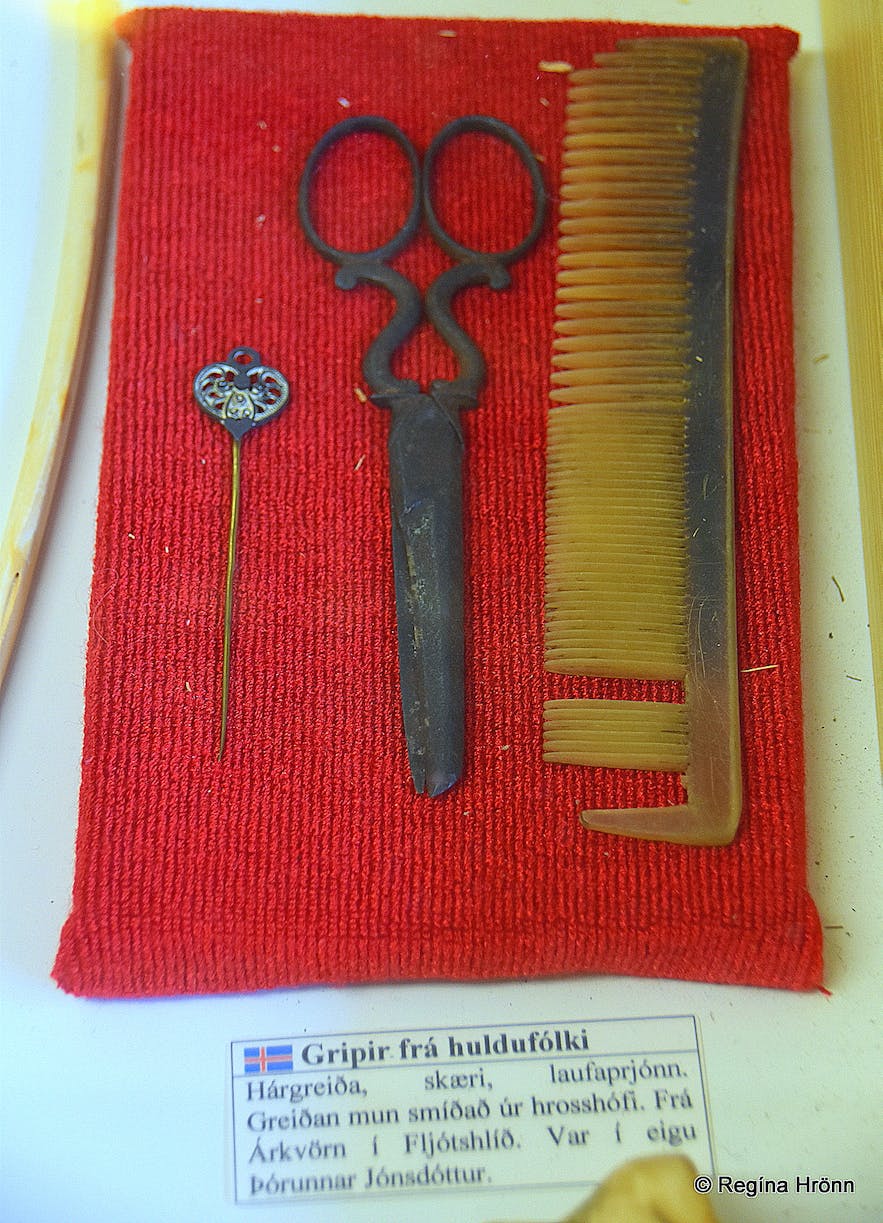 I would not have been able to find them by myself, so I was grateful for her help. You will find them if you take a left turn when you enter the museum, then another left turn and walk to the end of the showroom. The gifts from the hidden people will be on your left-hand side :)

I took the photo above of the comb, scissors, and pin. The comb is made from the hoof of a horse. Amazing artefacts!

The story told goes like this: "Not everybody believed in the existence of the hidden people. Amongst them was Þórunn Jónsdóttir from Árkvörn in Fljótshlíð in South-Iceland. She denied the existence of the hidden people. One night she dreamt that a hidden woman approached her and said: "You don't believe in our existence, but when you will wake up, look into your chest and see what you will find in it". 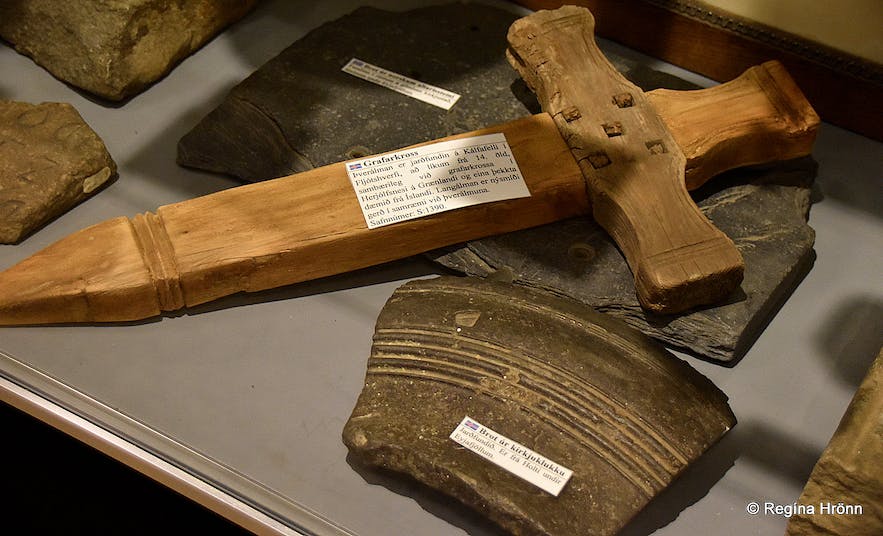 The morning after Þórunn looked into her chest and as she opened it, 3 things lay on top; scissors, a  comb, and a pin. From this very day, the woman believed in the existence of the hidden people." 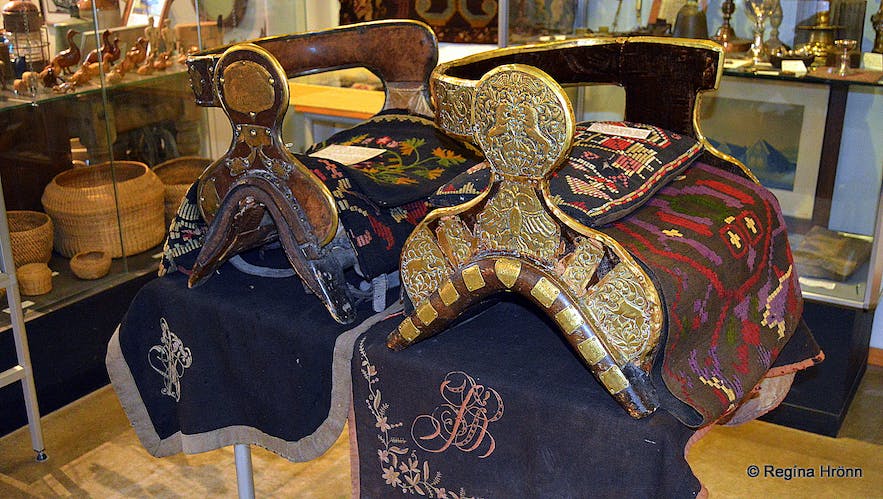 The Skógar museum grew and grew, and the latest addition is the Museum of Transportation, which opened in 2002. At this museum, one can follow the development of transport in rugged Iceland through the centuries.

This part of the museum is fascinating as here one can follow the history of how horses and boats were the primary means of transport - and see the early types of snowmobiles and old cars until modern days. Here one can also see the finest examples of women's side saddles from the 18th and 19th century (see my photo above). 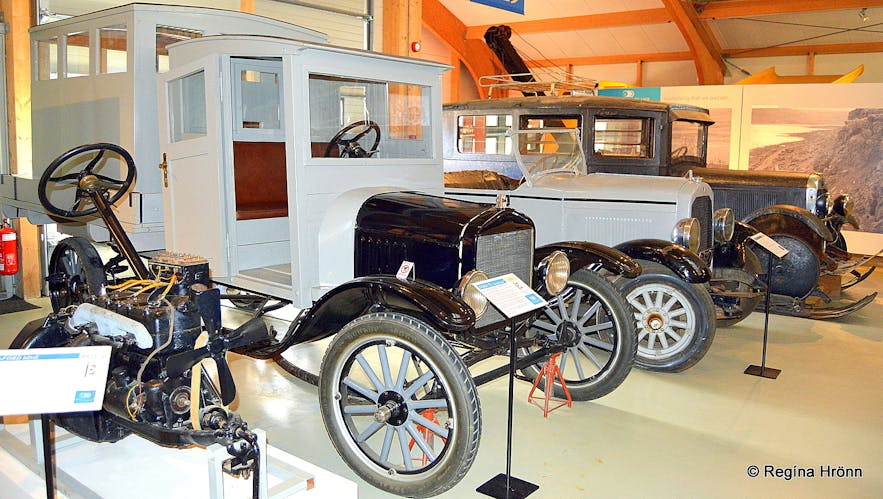 On display are several reconstructed old cars, the oldest one from 1917. My photo below shows the first post-car in Iceland from 1931. It was used for postal delivery and passenger transport in the 1930s.

In this section of the Skógar Museum, you will also learn about telecommunications in Iceland, electricity and the electric network, radio communications, the coast guard and about Landsbjörg search and rescue. 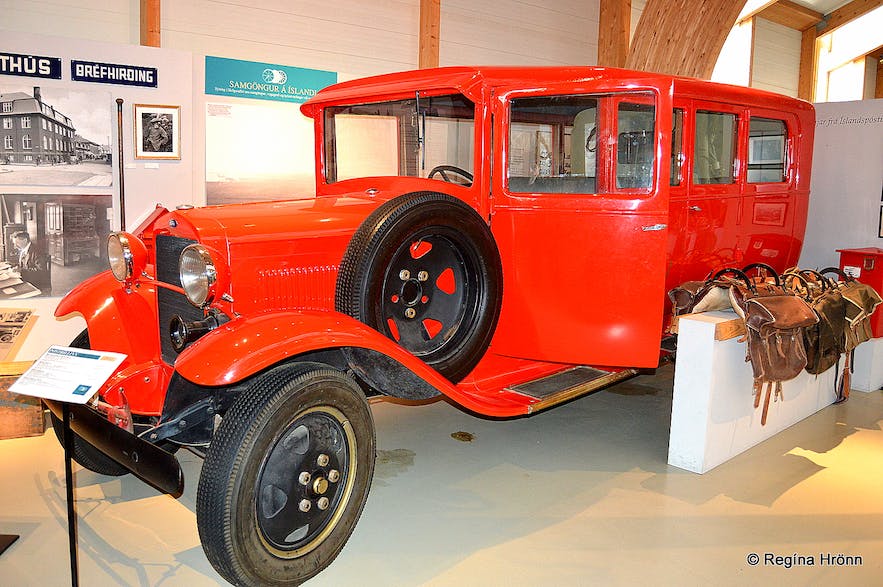 Skógar Museum is an excellent museum to visit with many interesting sights in the vicinity: the majestic Skógafoss  waterfall and other interesting waterfalls  in this area. 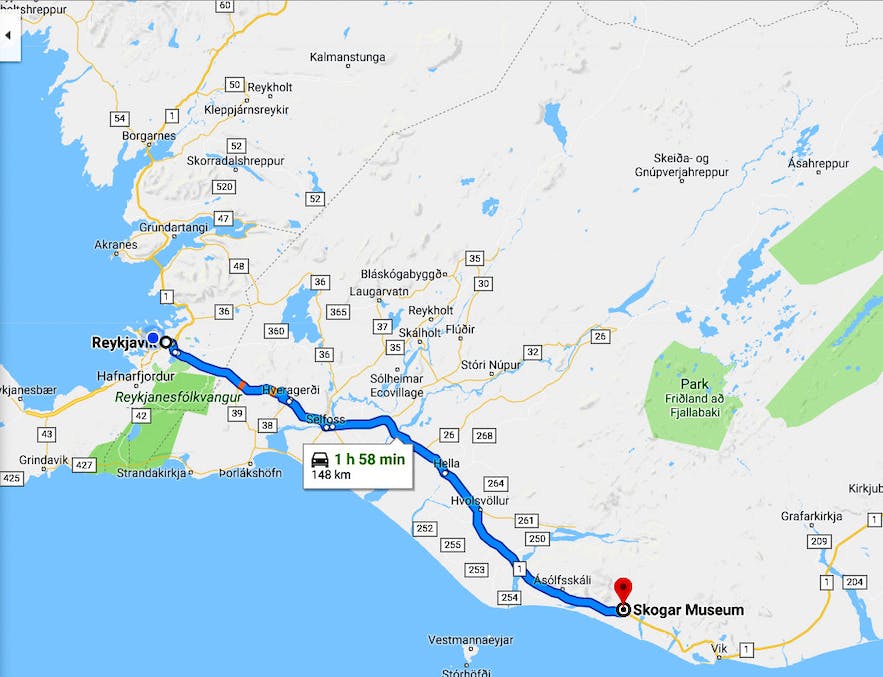 And if you take a short hike into the gorge behind the museum you will see a lovely, less-visited waterfall, the beautiful Kvernufoss.

Skógafoss waterfall and the museum are only some 150 km away from Reykjavík, and to reach it you can rent a car in Reykjavík  and make an excellent day tour out of your visit.

And if you do not want to drive yourself, then check out the myriad of guided tours of this area.

Have a lovely time at Skógar :)