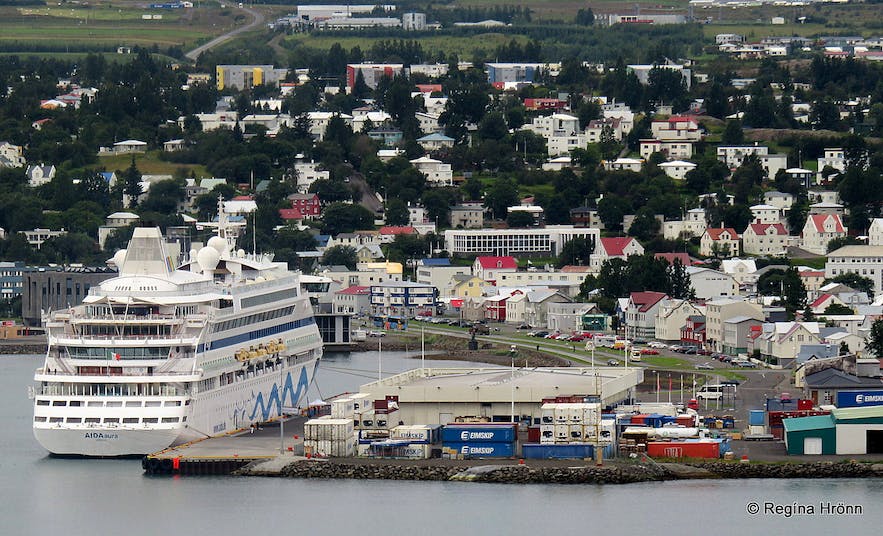 The tour started bright and early at 6:25 in the morning from the offices of Saga Travel in Akureyri, the beautiful capital city of North-Iceland. 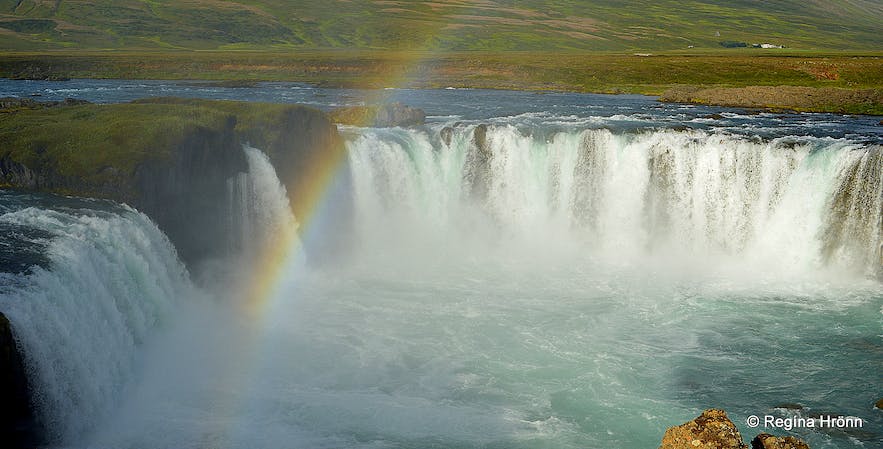 The name of Goðafoss stems from when the conversion to Christianity was made in the year 1000. Þorgeir ljósvetningagoði, the ex-pagan chieftain, right after returning from Alþingi Parliament where the conversion was made, is said to have thrown his statues of the pagan Norse gods into the waterfall. And the waterfall got its name Goðafoss - the waterfall of the Gods. I have written a detailed travel-blog on Goðafoss:

Our second stop was a short photo stop by the lava pillars by Lake Mývatn where we stopped for 5-10 minutes. Lake Mývatn is Iceland's 4th largest lake and was created in a basaltic lava eruption 2300 years ago. The surrounding landscape in the Mývatn area is extraordinary. There are so many wonderful lava formations in this area, including the lava pillars by and in Lake Mývatn and Dimmuborgir.

We also made a stop at the supermarket to stock up on food and drinks as we were headed out into uninhabited areas. See also my travel-blog on Mývatn: 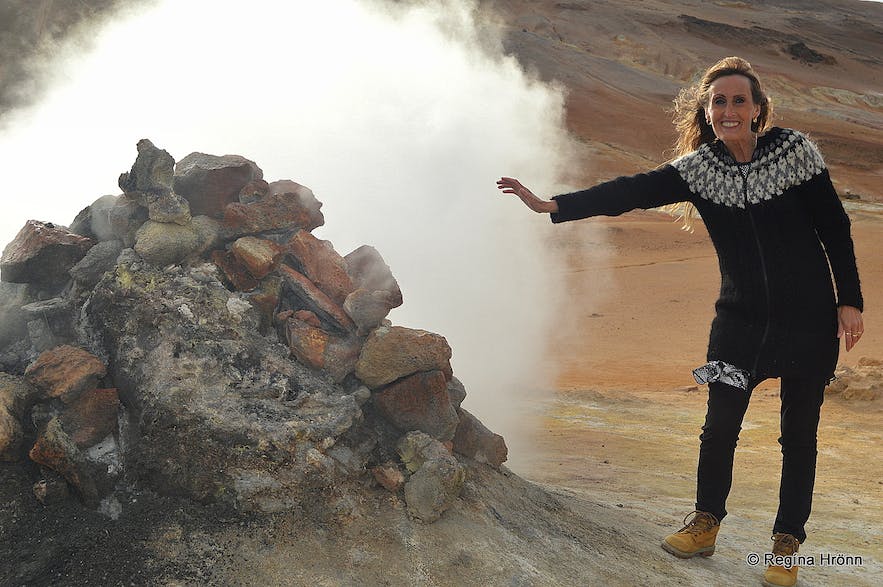 We now visited Mt. Námafjall and the high-temperature area, Hverarönd. So our third stop was made amongst boiling and bubbling mud pools in a part of Iceland which looks like you have landed on the moon.

This high-temperature geothermal area is often referred to as Hell's Kitchen, as it is boiling and steaming and emitting an overwhelming smell of sulfur caused by the steam and the fumarole gas. If you join the Mývatn tour offered by Saga Travel, then you will get more time in this amazing area. I have joined that tour and written a travel-blog about it: 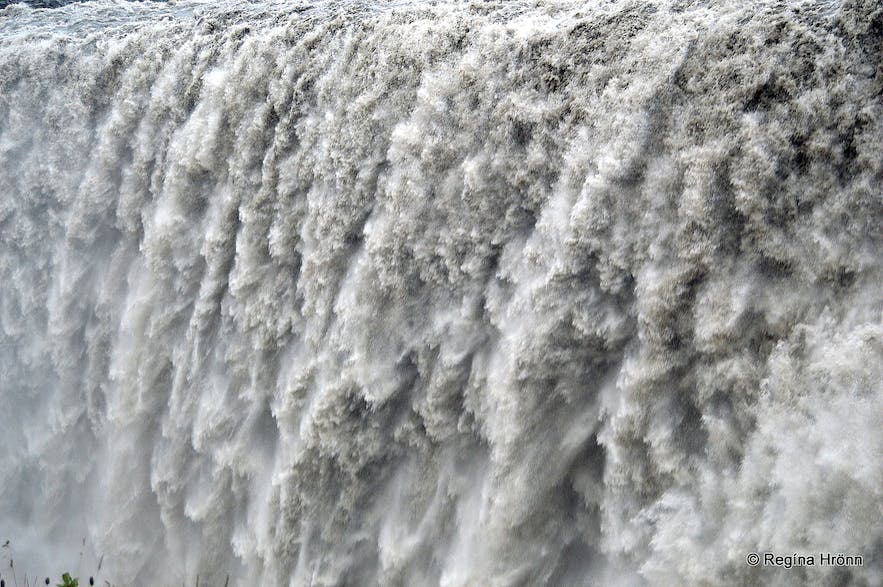 Our fourth stop was on the western side of the amazing Dettifoss waterfall. There is a 15-minute walk down to the waterfall and our guide joined us and stayed with us for the whole duration of this tour, which I find very reassuring.

Dettifoss is Iceland's most powerful waterfall - a massive roaring wall of glacial water. It is 100 meters wide and 44 meters tall with a flow of 193 m3/s! 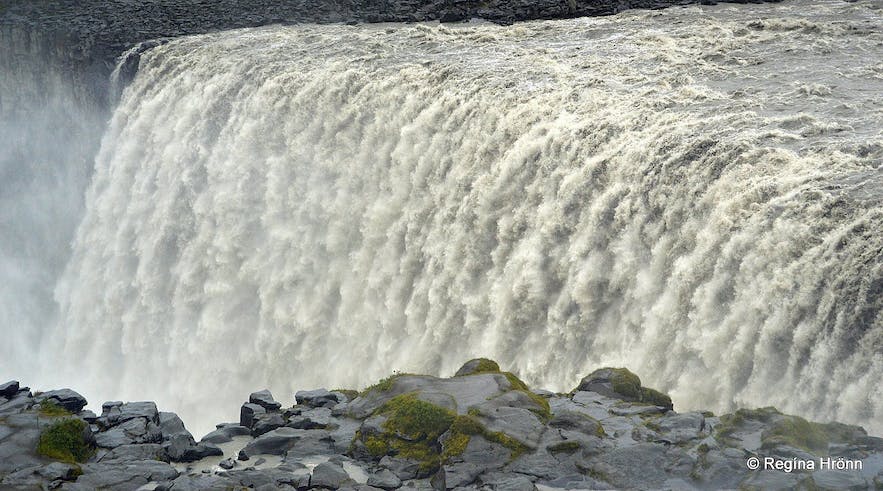 Dettifoss is situated in the glacial river, Jökulsá á Fjöllum, which is the second-longest river in Iceland. The water in glacial rivers is milky white and greyish - and ice-cold, so let's be careful here. The river originates in Vatnajökull glacier.

I have written a special travel-blog about Jökulsá á Fjöllum glacial river: 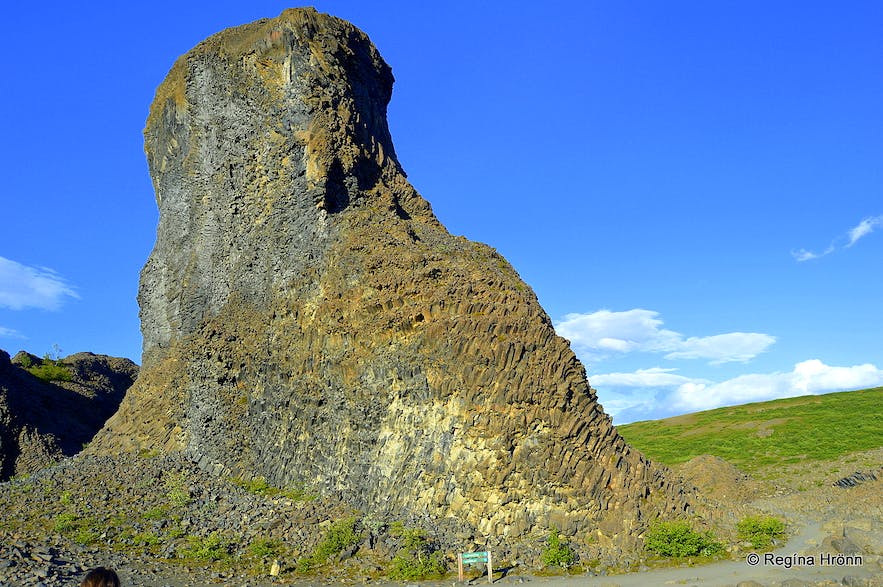 These peculiar rock formations, some of which are standing right in the middle of the massive Jökulsá á Fjöllum glacial river, are volcanic plugs which have been eroded by the massive glacial river. 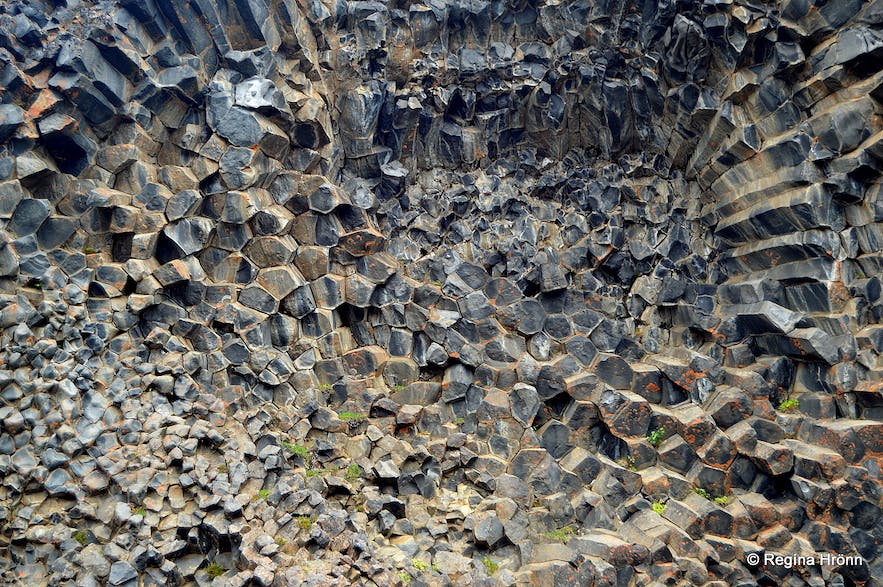 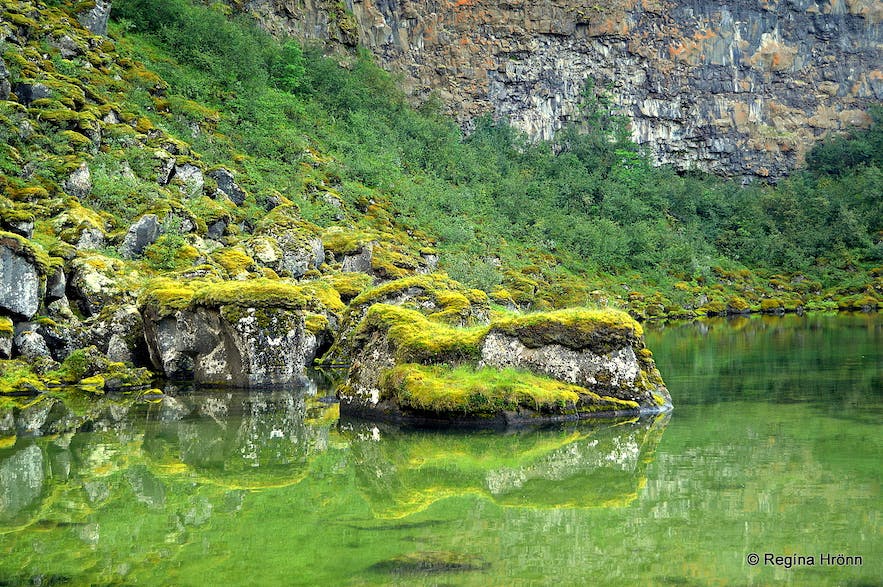 This pond is what is left of a big waterfall which once cascaded from the cliffs and it is unbelievably peaceful there. I can tell you that in my eyes this pond and the surrounding cliffs are like out of this world and I could stay there for hours, which I have done many times during my camping trips to Ásbyrgi. 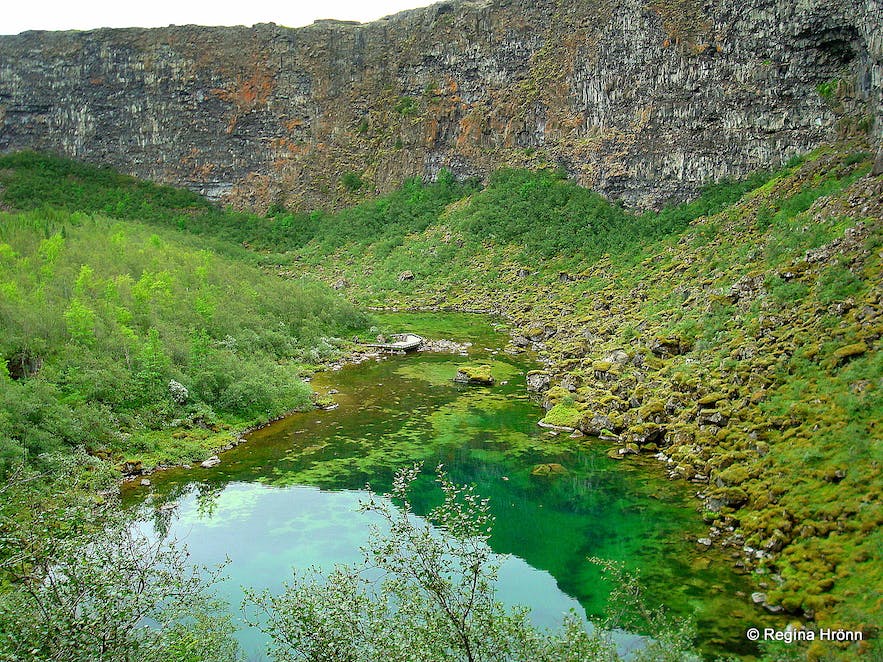 Ásbyrgi belongs to Vatnajökull National Park and is 3.5 km in length and 1.1 km across with walls as high as 100 meters. After our visit to the pond, there was a half an hours coffee break at the cafè - supermarket at Ásbyrgi. See also my travel-blog about my favourite place in Iceland: 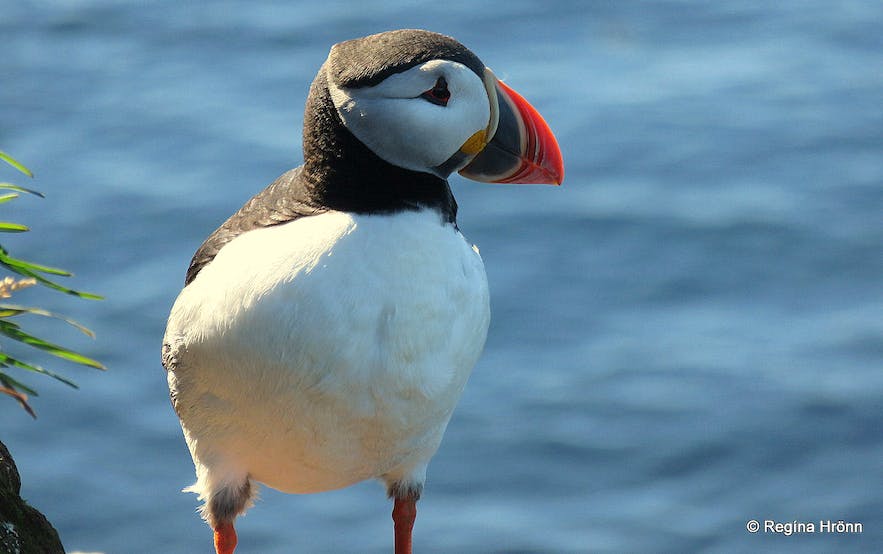 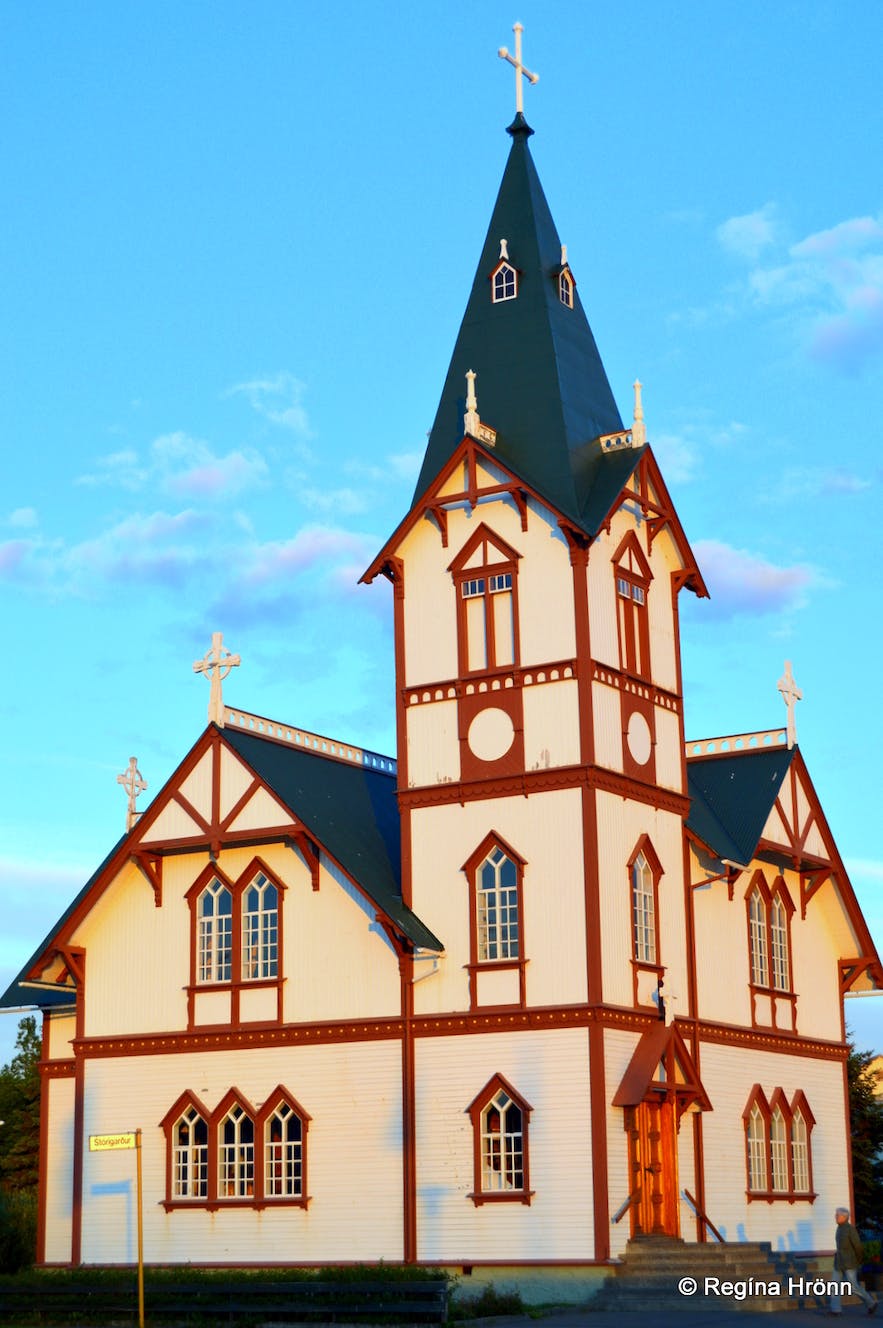 Our ninth and last stop was at my beloved Húsavik, which has been called the whale watching capital of Iceland. Húsavík is the birth-town of my grandmother and her 14 siblings. In Húsavík you will find one of the most beautiful churches in Iceland, if not the most beautiful one, built in 1907. 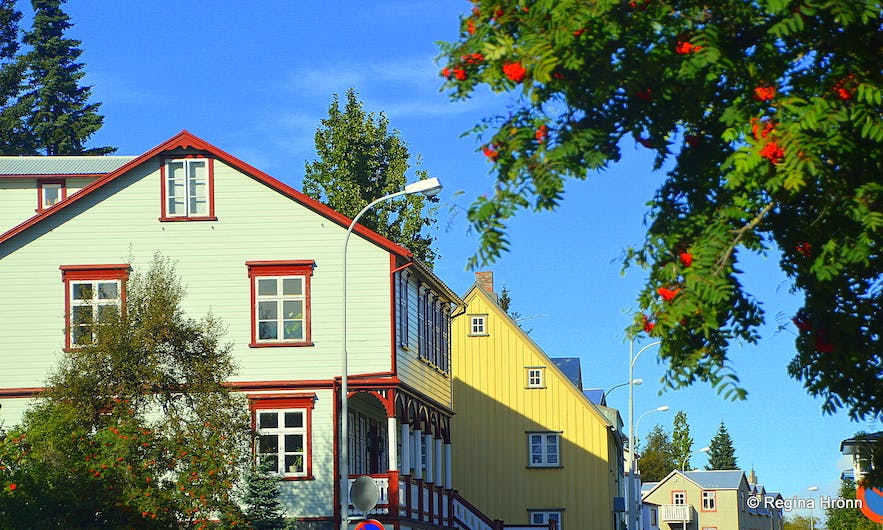 I joined this tour again with a different travel company a couple of years later, and have written another travel-blog on the Spectacular Diamond Circle in North Iceland. I have driven the Diamond Circle many times myself through the years and never get tired of it and always look forward to exploring it again.

The Diamond Circle with Ármann

Diamond Circle Tour in North Iceland from Reykjavik with Flight

You can also rent a car in Reykjavík or Akureyri and venture into the ruggedly beautiful Jökulsárgljúfur glacial canyon by yourself. Just take into account that the roads are very bumpy in some places.

This is a summer visit only as the road to Dettifoss is only cleared of snow twice in the wintertime.

But Saga Travel offers some winter tours to Dettifoss in modified super jeeps from March-June: