Nowadays Eyrarbakki is so quiet, yet with so much to offer. If you love quaint old colourful houses and a slow pace of life, then Eyrarbakki is the place to visit :) 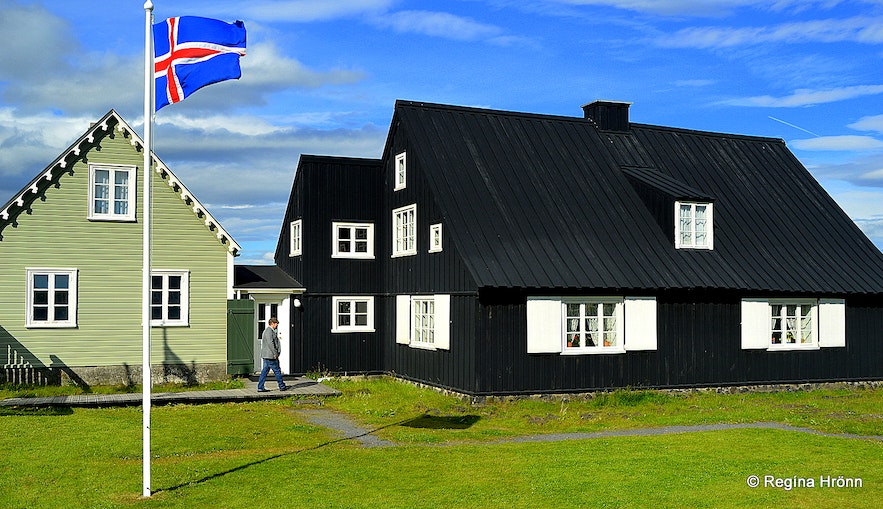 Húsið - The House in Eyrarbakki village

Viðeyjarstofa house, on Viðey island just outside of Reykjavík, is the oldest concrete house in Iceland, built in 1753-1755 - and the old wooden house in Aðalstræti 10 in Reykjavík is considered to be the oldest house on the mainland, as it were, built in 1762. 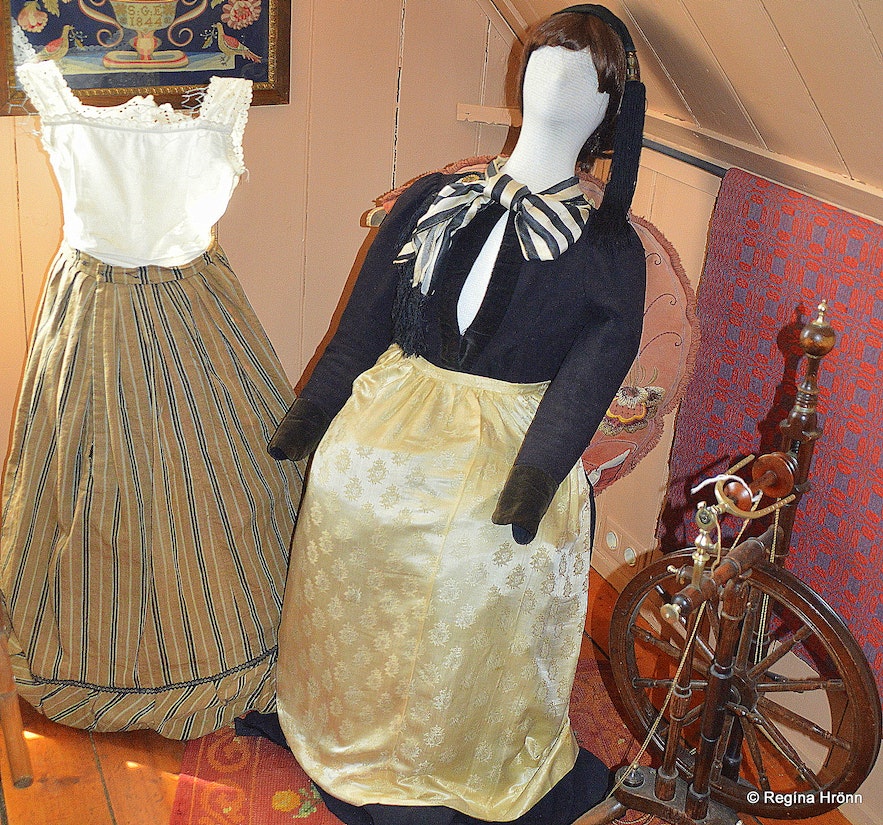 In a small house behind Húsið you will see the Eggjahúsið or the House of Eggs, where you can visit the Peter Nielsen collection of birds and eggs. Peter Nielsen was the store manager of the old store and collected birds and eggs from Icelandic birds. 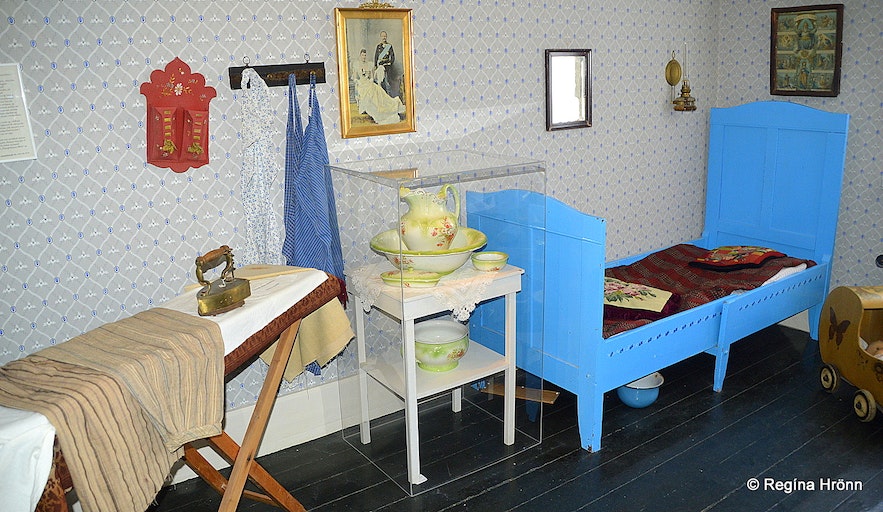 After the store manager and trading moved to nearby Selfoss in 1926 Húsið came into the possession of the National bank. In 1932 it became the private property of Halldór K. Þorsteinsson and Ragnhildur Pétursdóttir in Háteigur in Reykjavík and was used as a summer cottage for a while. Ragnhildur Halldórsdóttir inherited Húsið after her parent's demise.

After the lady of the house, Auðbjörg, sold Húsið it came into the possession of the State Treasury in 1992. A large amount of money was used for refurbishing it and 3 years later, in 1995, it opened up as a heritage museum - the Árnessýsla Heritage Museum - the House at Eyrarbakki and is now open to visitors during the summer months and upon appointment. 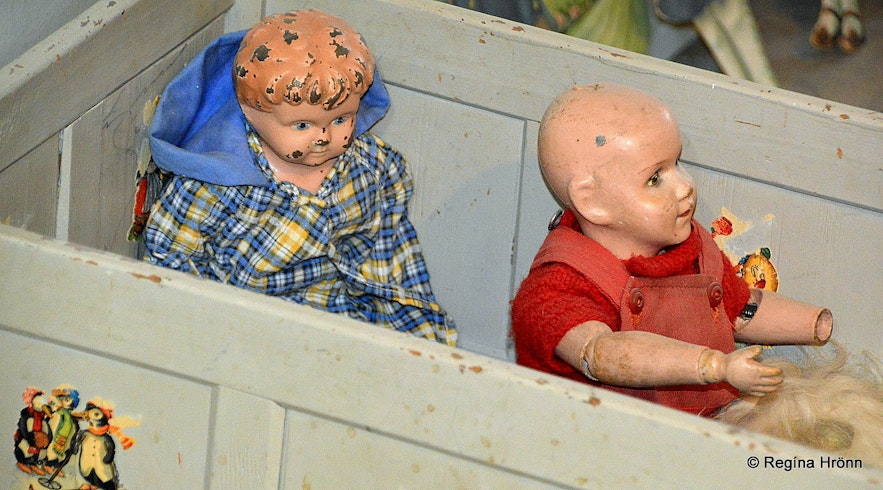 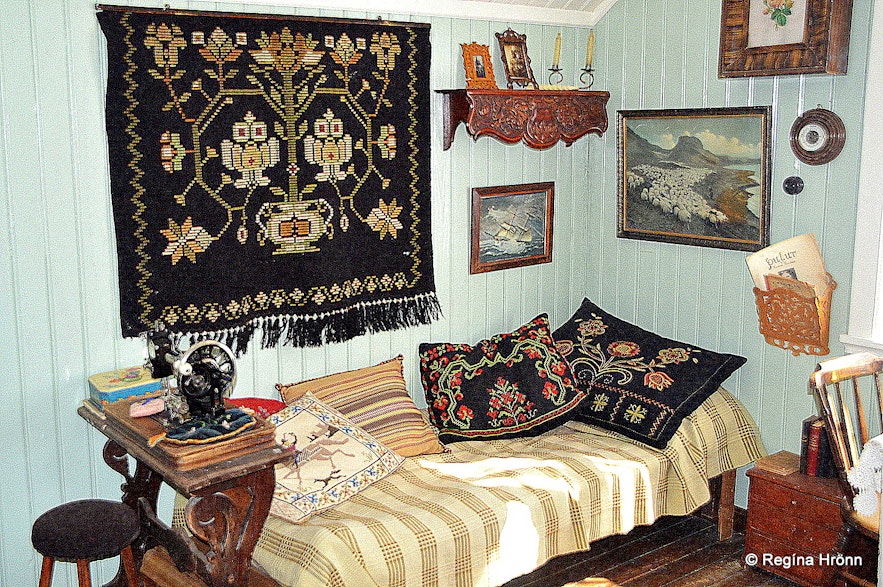 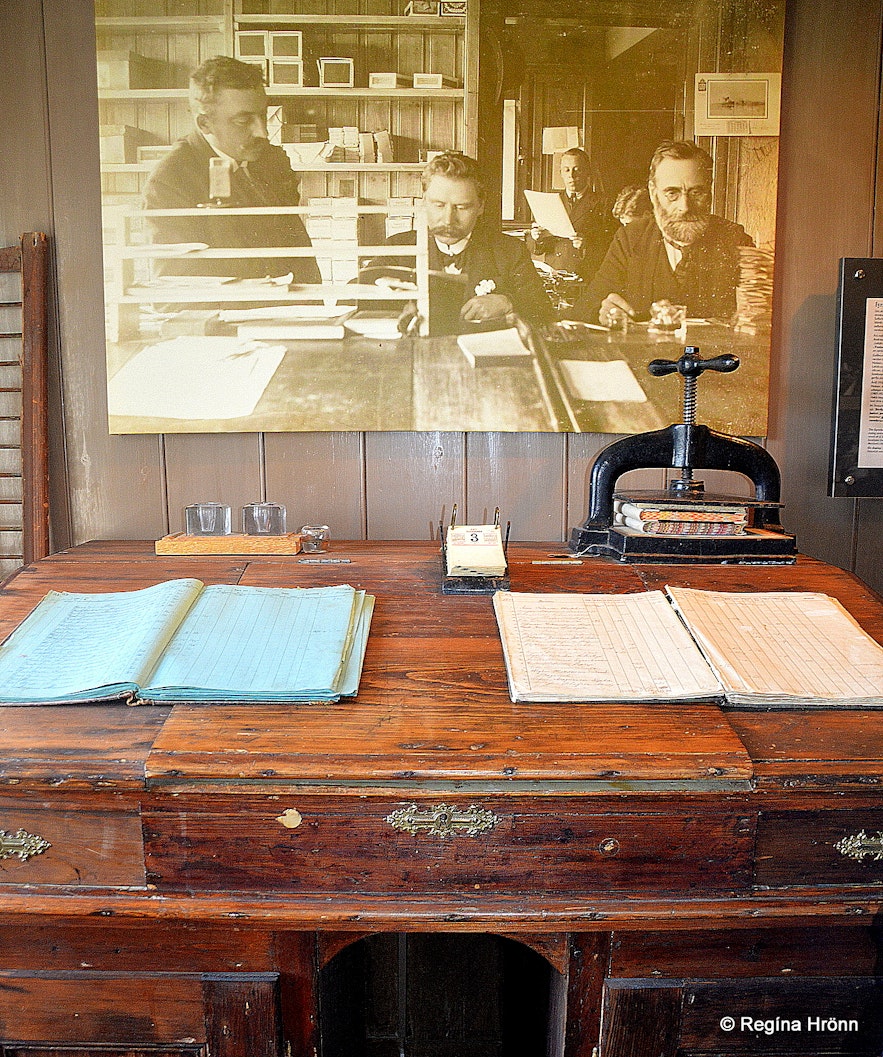 Every seaside village and town in Iceland has got a memorial of this sort and I seek them out on my travels in my country and pay my respect. 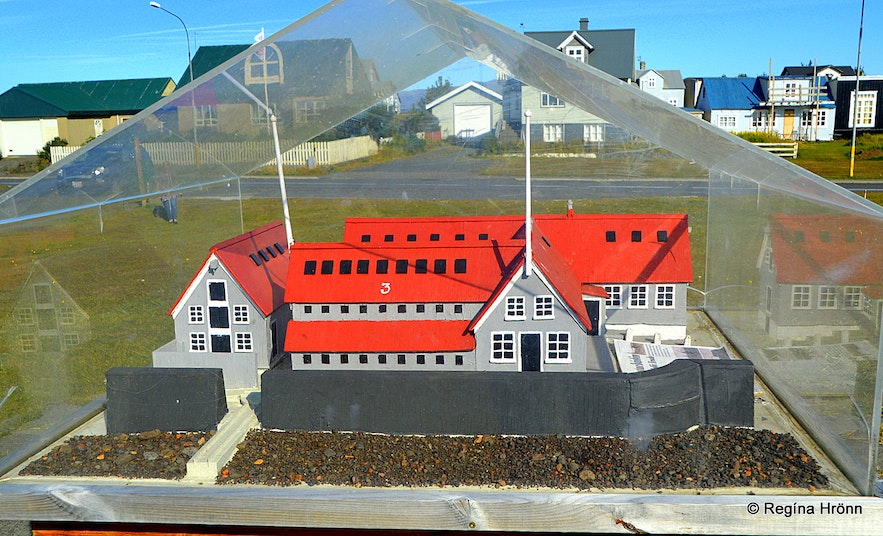 A model of the Vesturbúðin store of the Danish Lefolii-store

Fishing kept the Icelandic nation alive through the centuries and the sea has claimed many a life, leaving grief-struck families ashore. These monuments remind us of how harsh the living conditions were in Iceland.

Do stop for a while and pay homage to these memorials during your visit. 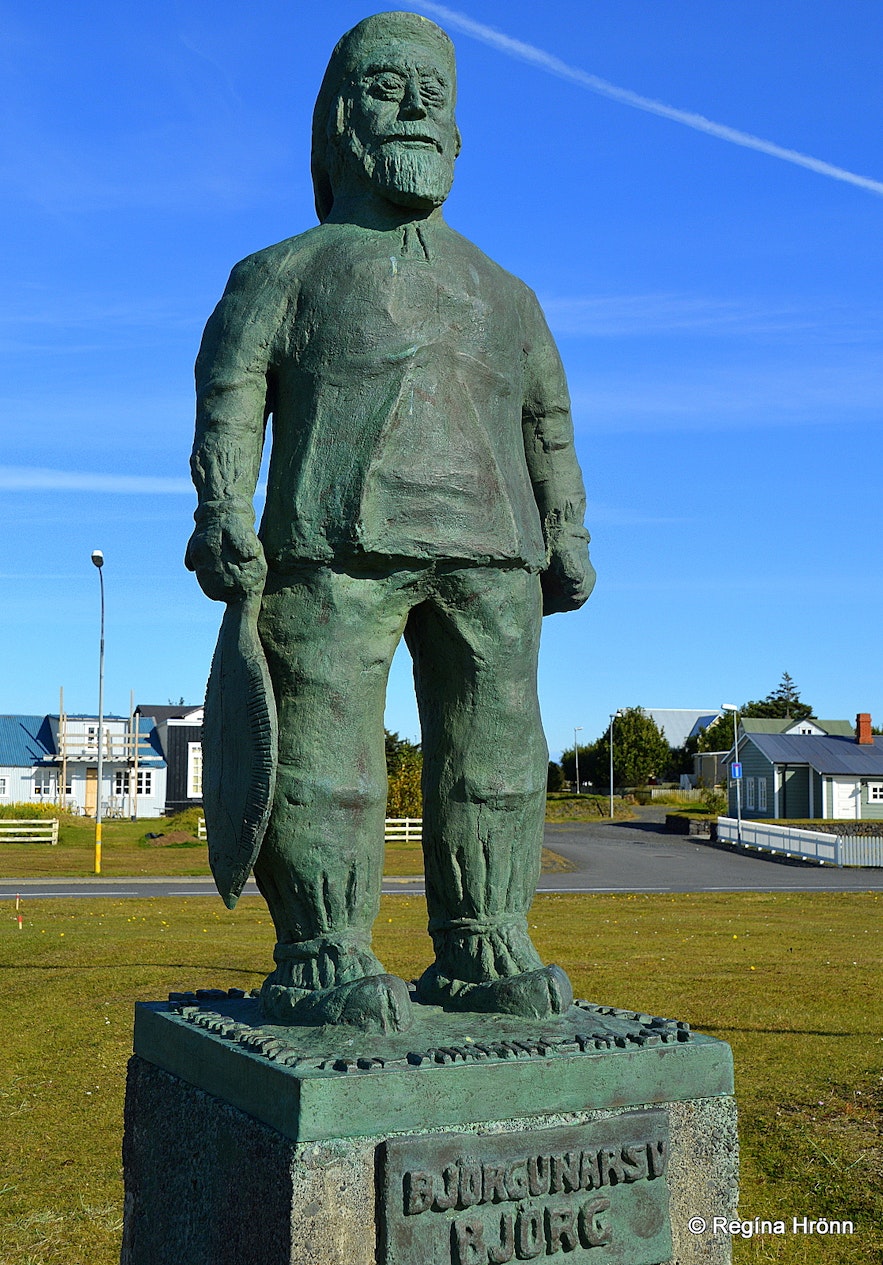 The monument for drowned fishermen at Eyrarbakki 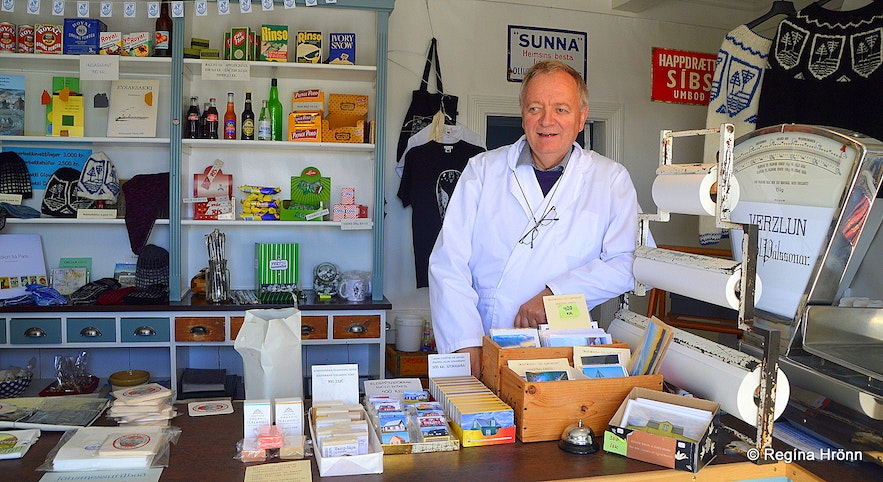 In one of the colourful little houses in Eyrarbakki, you will notice a small convenience store. This is Verslun Guðlaugs Pálssonar - the convenience store of Guðlaugur Pálsson, which Guðlaugur managed here at Sjónarhóll from 1919 until he died in 1993 at 97!

Before opening up his store in this quaint little grey house with a red roof Guðlaugur had been running his store for 2 years at another location in Eyrarbakki. 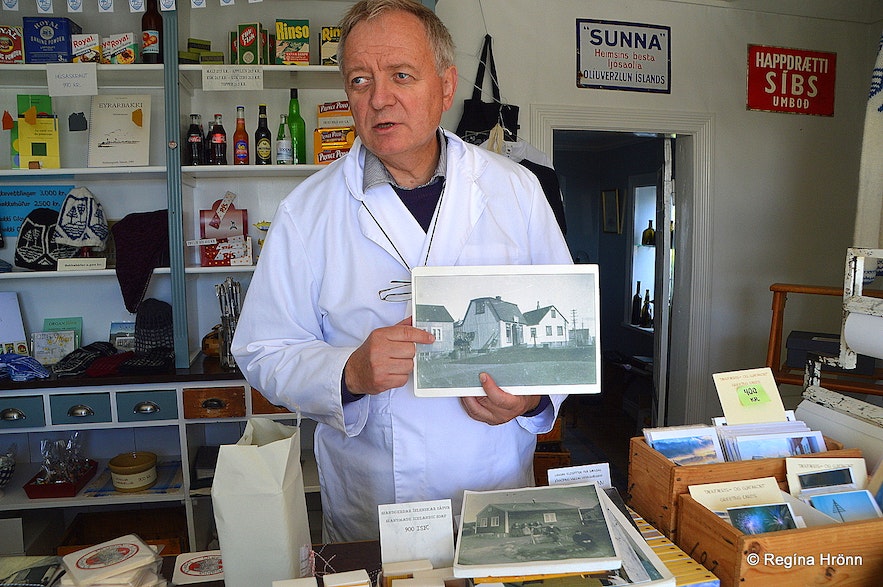 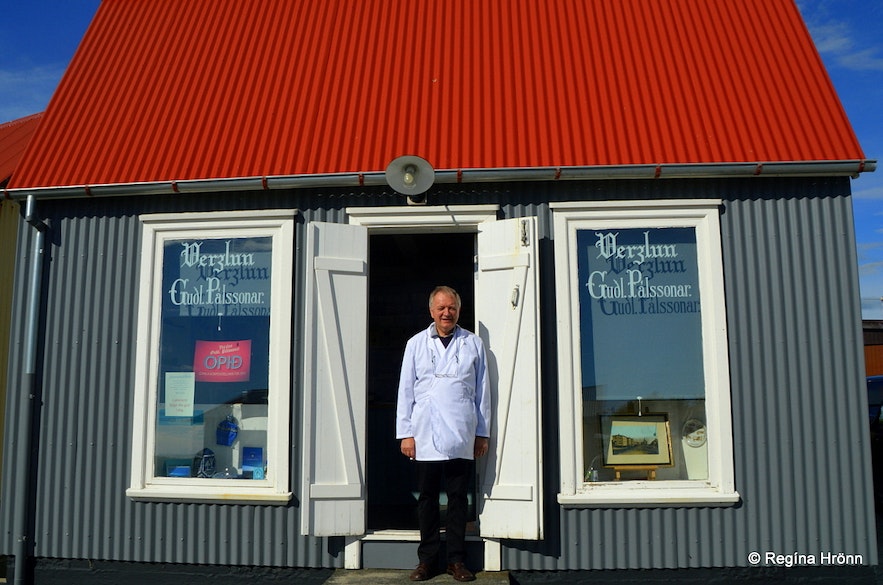 I pop into the store when I see that it is open and buy a couple of things and reminisce. Last time I bought an excellent book on Hvítá river for a very good price. The store is now mostly open at weekends. 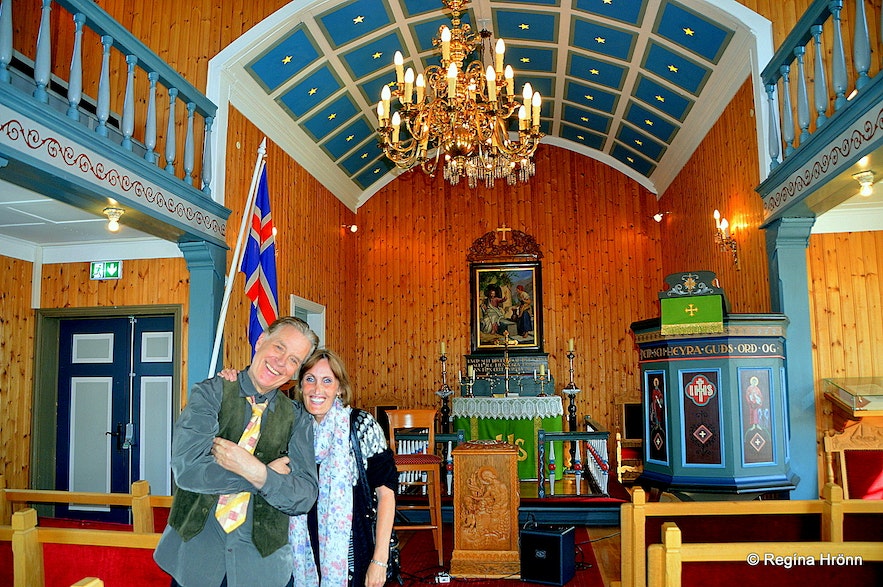 I met Valgeir in Eyrarbakkakirkja church

The lovely couple Valgeir Guðjónsson and Ásta Kristrún Ragnarsdóttir live at Bakkastofa  in Eyrarbakki village. You might remember them from my travel-blog Saga Music 101 - the Icelandic Viking Sagas portrayed in Songs.

They visit Reykjavík from time to time with their wonderful Saga Music 101 Show.

Valgeir and Ásta at Bakkastofa offer you an unforgettable visit to the quiet little village in which they live. 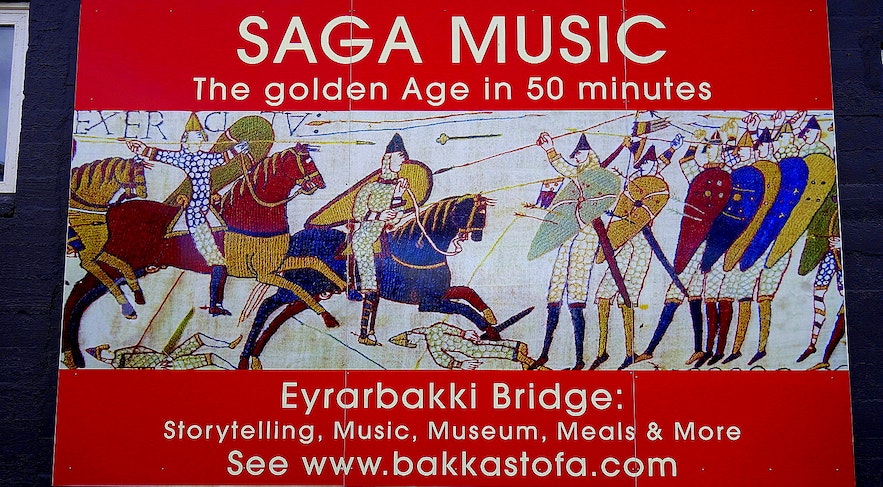 The show at Bakkastofa in Eyrarbakki

Ásta and Valgeir are extremely nice and lovely people, so do pay them a visit. 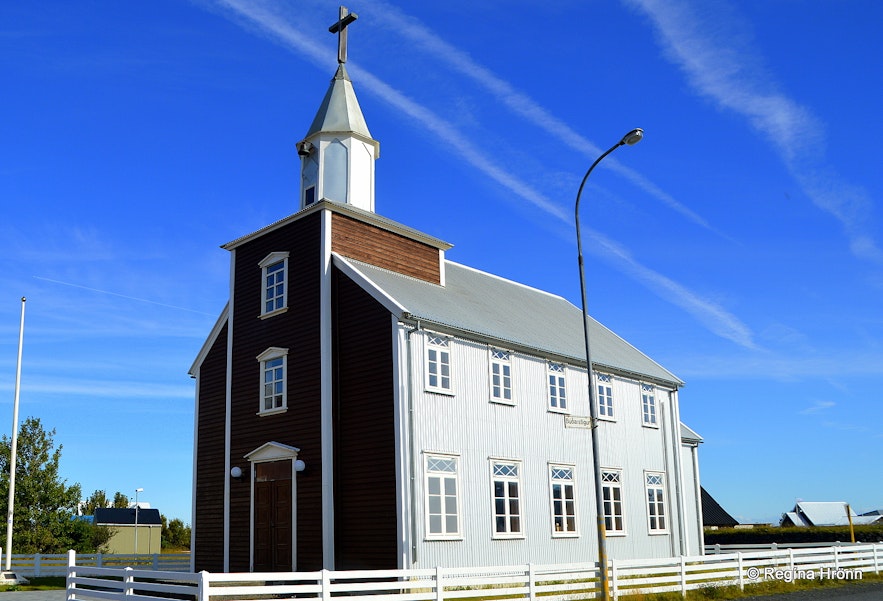 When I visited Eyrarbakki during their village festival on Midsummer Day I met Valgeir and Ásta in the village church, Eyrarbakkakirkja (1890), where Valgeir was performing.

They welcomed me with open arms and gave me such good compliments on my travel-blog that I will never forget it - they are for sure an extraordinary couple :) 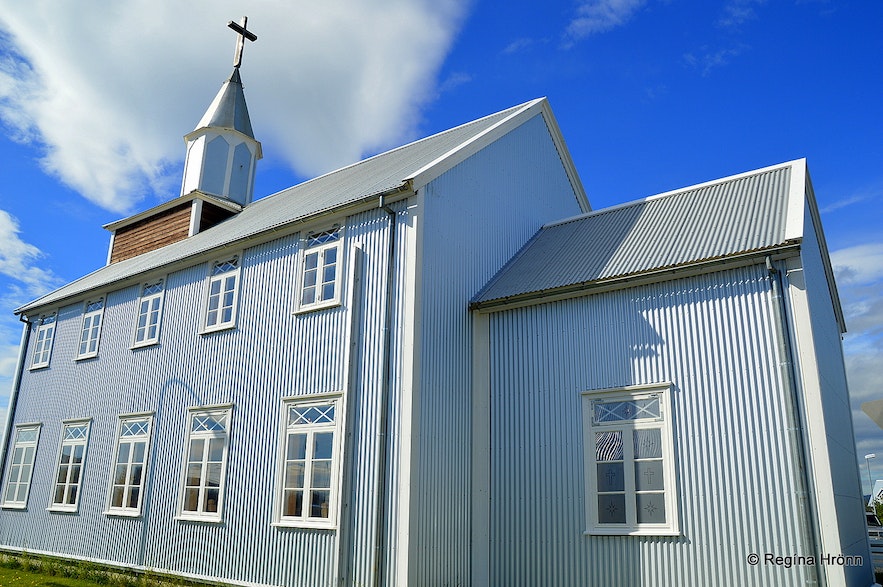 In Eyrarbakkakirkja church you will see an altarpiece painted in 1891 by the Danish Queen Louise, the queen of King Christian IX (who by the by was the great-great-grandmother of Queen Margaret II in Denmark, Queen Elizabeth II in England, and King Harald V in Norway). 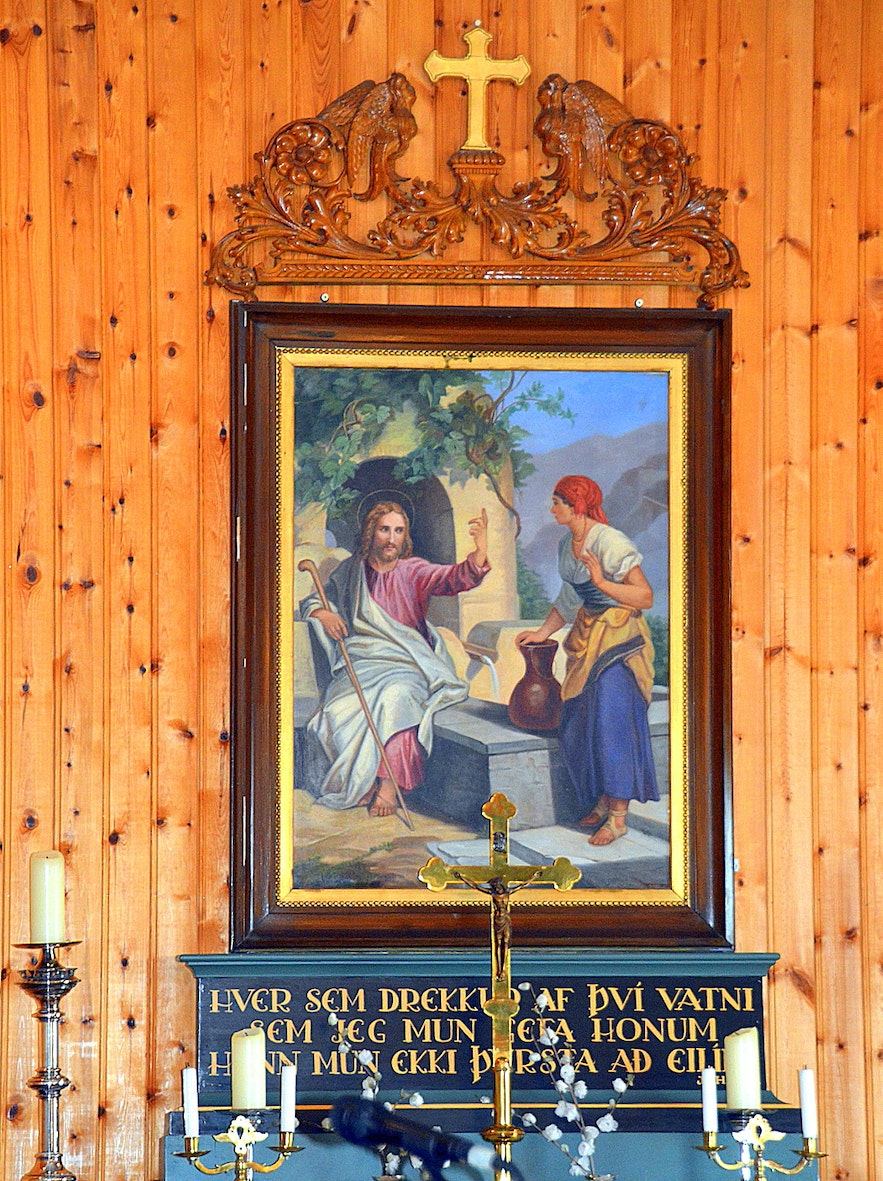 The lovely altarpiece in Eyrarbakkakirkja church

In one location, when you enter Eyrarbakki village on the west side, you will encounter this sign by the shore pointing out that the next stop straight south from the point your a standing is the South Pole. 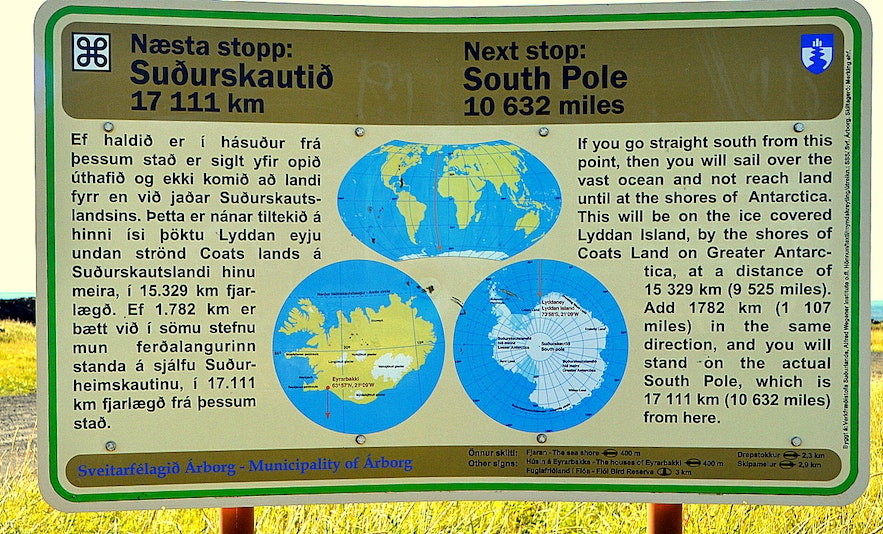 Next stop - the South Pole 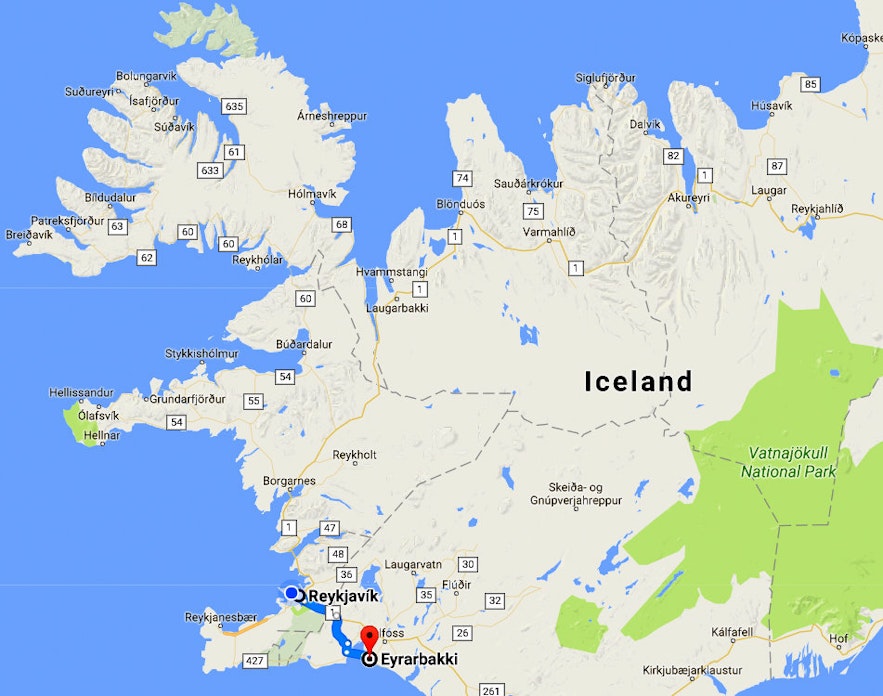 The drive to Eyrarbakki village from Reykjavík city is 53 km via route 1 south and route 39, which we call Þrengslin. Þrengslin is a less travelled road, with a sign showing you the direction of Þorlákshöfn village. 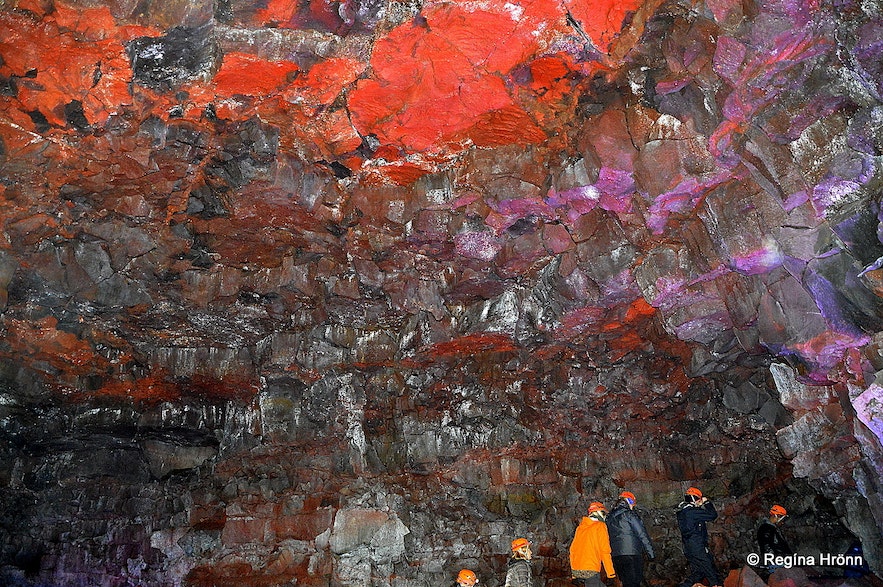 I have written another travel-blog about Stokkseyri village: The lovely Stokkseyri Village in South Iceland - the Home of the Wildlife Museum, Turf Houses and Kayaking. 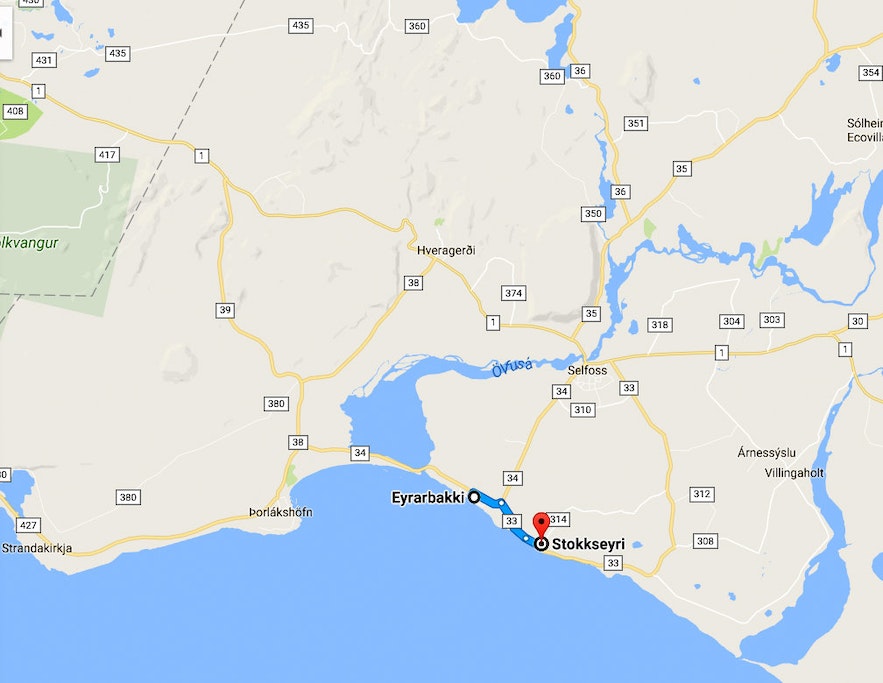 In another travel-blog, I will be showing you more interesting sights along the south coast of Iceland.

This is a semi-circle that will take you to ring-road 1 again, where you can continue on your travels to the sights on the south coast.

Have a lovely time at Eyrarbakki :)