On the 2nd of February 2013, an interesting project started in Hvolsvöllur village in South-Iceland. It is called "Njálurefill" or the Saga of Njáll Tapestry. It is a very long tapestry, which will be around 90 metres long when it will be finished and 50 cm wide. The project is finished now and you can see how long it turned out to be a little bit further in my travel-blog.

It was estimated in the beginning that 10 metres would be sewn annually. But this has proven to be a very popular project and for the first 2 years, 38.25 metres were sewn! In December 2017 some 68 metres out of a 90 had been sewn! 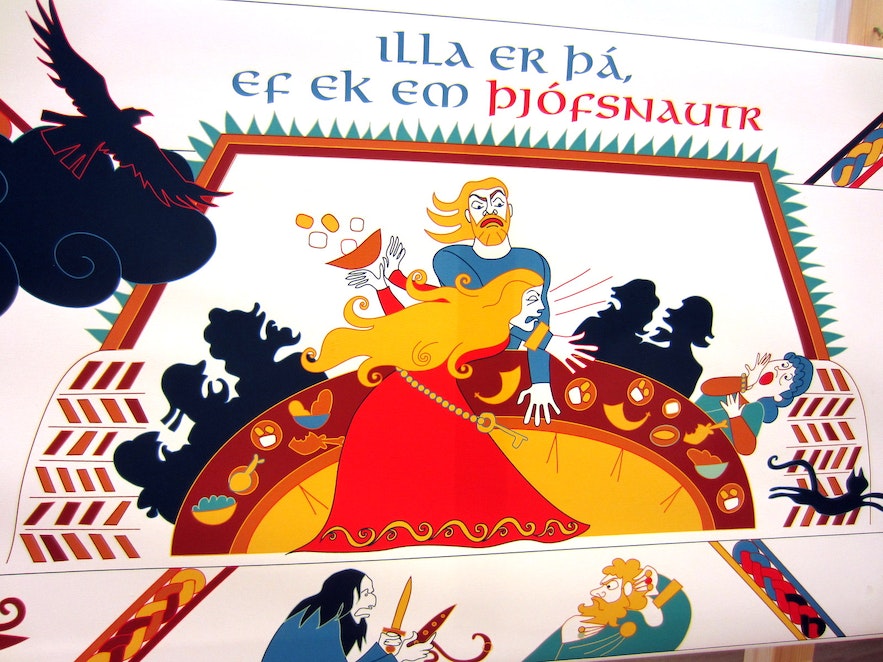 The estimated sewing time of the making of the Njál's Saga Tapestry was supposed to be 6-10 years. But seeing that everybody can take part in the sewing so many people have shown interest in this project that it is estimated that it will only take 5 years all in all to finish it - if everything goes as well as it has up until now.

The goal is to sew the main events of the Saga of Njáll in the tapestry. And thus make a really interesting artwork that will for sure boost tourism in Hvolsvöllur.  Be it, tourists or locals, I think this is a very interesting project for everybody interested in the Icelandic Sagas and embroidery alike.

The stitch that is used in the Njál's Saga Tapestry is "refilsaumur" stitching (Bayeux stitch), which is a stitch that was used way back in the Viking Age. The tapestry is embroidered on 100% linen and Icelandic wool yarn is used for the stitching. The yarn is dyed with Icelandic herbs with ancient methods, so this is very natural and Viking-like. 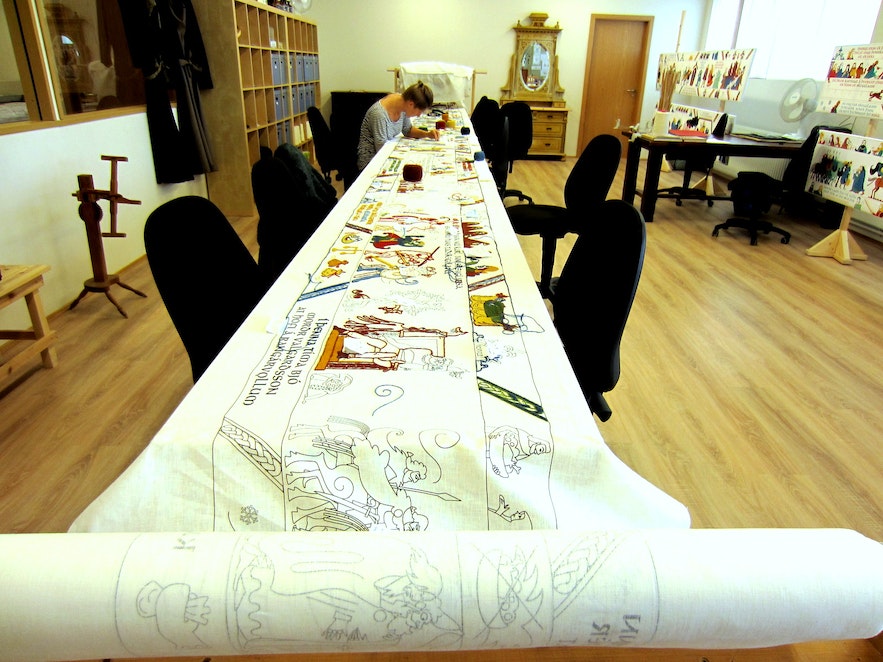 This Saga took place in the Rangárþing region. It tells the story about the good friends, Gunnar of Hlíðarendi and Njáll of Bergþórshvoll. Gunnar's enemies end up killing him, and Njáll and his wife and sons are burned to death in their home. It is a story about a battle, power struggle, passionate love, and deceit. 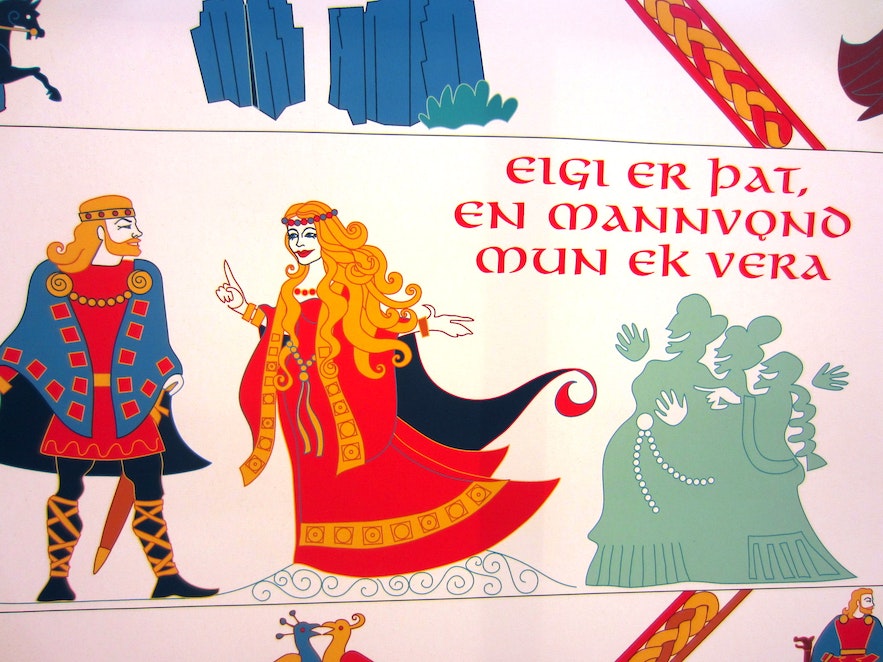 I visited the Saga Centre just to have a look at the tapestry and get some information to write about it and introduce it.

One can just pop in for a visit or sew as little or much as one wants. It costs ISK 1,000 to take part in the sewing. Then you write your name in the guest book as proof of which part of the refill of Njál's Saga Tapestry you have sewn. You will get instructions so do not worry about making mistakes and ruining the project ;)

If you don't feel like sewing, but really want to take part in the project, then the instructor can sew for you and you buy a picture and get your name in the guest book. 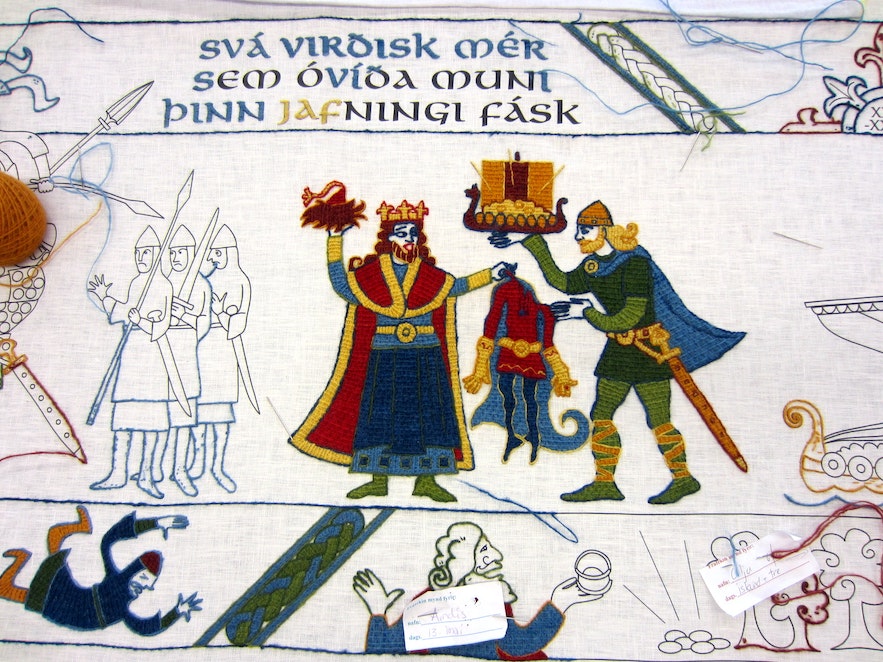 The Njál's Saga Tapestry received the Education Prize of South Iceland in 2014.

The designer of the pictures, which are printed on the Njál's Saga Tapestry, is Kristín Ragna Gunnarsdóttir. She has won the Icelandic Illustration Award on two occasions. This is a private project, sponsored by many, but two women started this wonderful project, Gunnhildur Edda Kristjánsdóttir, and Christina Bengtsson. Kudos to these women for a good idea and a job well done!

You could take part in the sewing or just visit the Njál's Saga Tapestry Sewing Centre in Hvolsvöllur village. 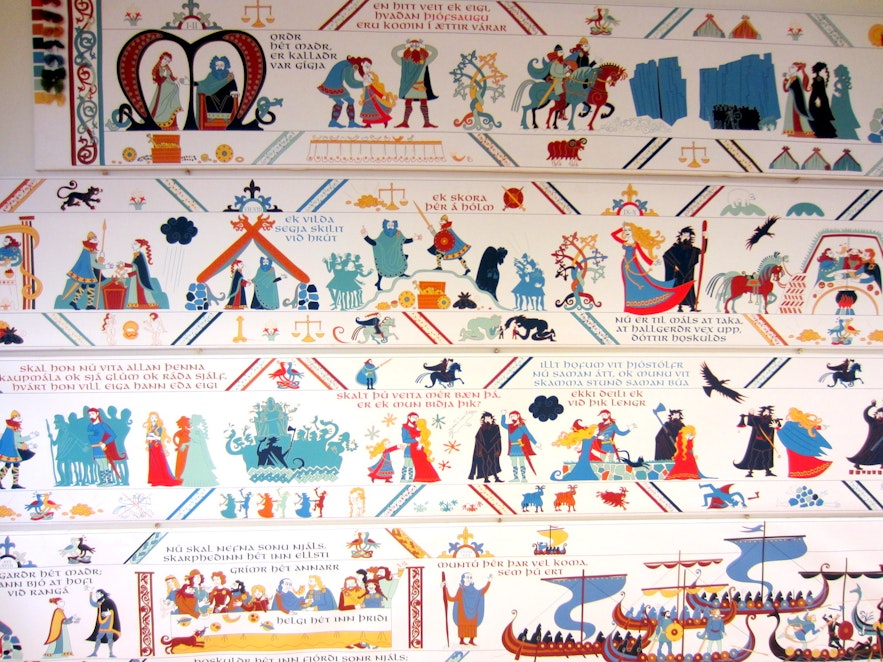 On the 15th of September 2020, the Njálurefill Tapestry was completed after 7.7 years in the making. Njálurefill is 91.6 m long and might be the longest tapestry in the world.

A non-profit organization was established in 2021 to preserve, maintain, and exhibit the Njálurefill tapestry. And to preserve and distribute the knowledge of refilsaumur - the Bayeux stitch and Brennu-Njálssaga - the Story of Burnt Njal.

The Saga Centre & the Exhibition on the Saga of Njáll 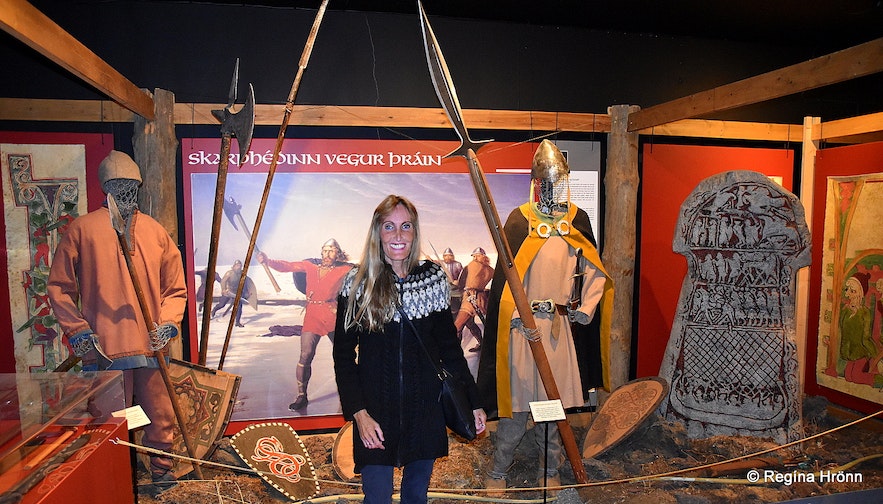 At the Saga centre

The Saga Centre is one of the museums on the Saga Trail. It exhibits Njálssaga or the Saga of Njáll - the Queen of the Icelandic Sagas.

This Saga of Njáll took place in South Iceland - in the Rangárþing region. The main part of the exhibition at the Saga Centre is on the characters in the Saga of Njáll. And it is very well done - I love such Viking exhibitions and seek them out on my travels in my country.

At the exhibition, you can learn about the Vikings and how they viewed the world and navigated their ships to so many places, including America. 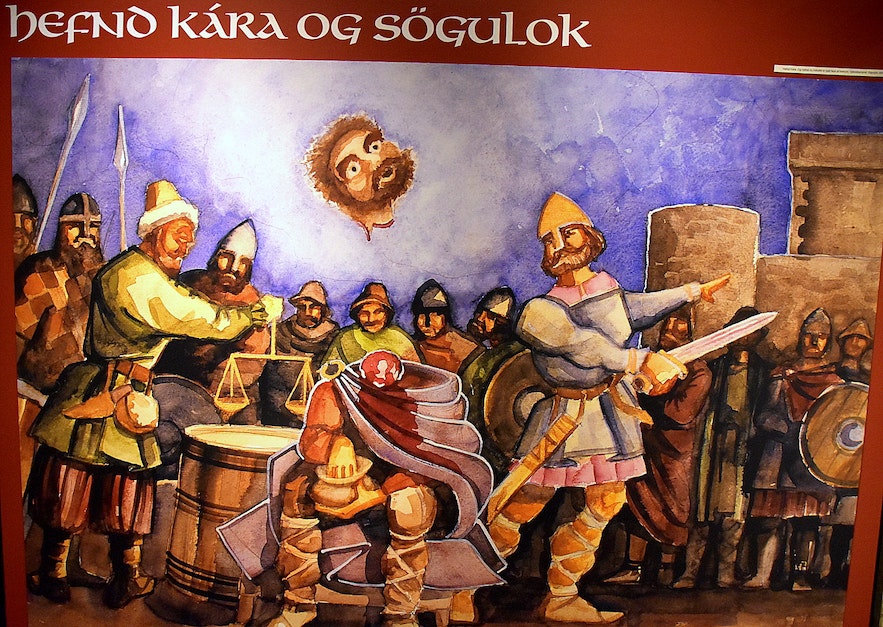 The revenge of Kári. The head counted to 10 when it flew off the body!

A part of the exhibition contains paintings with text on the Saga of Njáll. Some of them were very graphic - Viking style - as you can see in the painting above!

It tells the story of the good friends, Gunnar of Hlíðarendi and Njáll of Bergþórshvoll. Their wives were sworn enemies and cruel, as it seems. Gunnar's enemies end up killing him, and Njáll and his wife and sons are burned to death in their home, thus the name Brennu-Njáls Saga or the Saga of the Fire and Njáll.

This Saga was written in the 13th or 14th century and has the style of stories written at that time.

The Model of Þingvellir 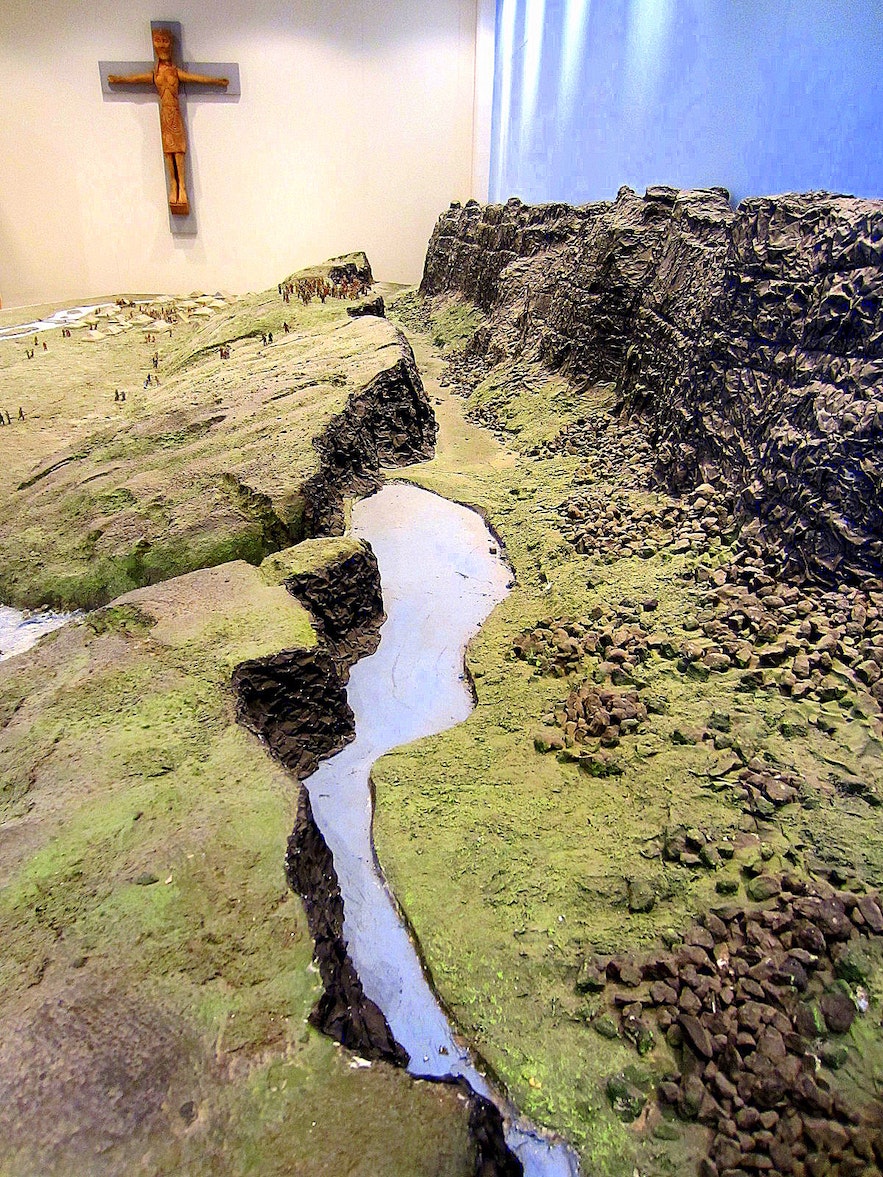 The model of Þingvellir

On display at the Saga Centre, you could find a model of Thingvellir, the old Viking parliament, established in 930. The model shows what Þingvellir might have looked like in the year 1000. It shows 600 meters of the main area of the parliament at Þingvellir where Alþingi took place for 2 weeks each summer.

This model was created for the exhibition "Thousand Years of Christianity". At the Millennium festivities in Iceland in the year 2000, we also celebrated that the nation had converted to Christianity a thousand years earlier.

At Alþingi (the parliament) at Þingvellir in the year 1000, it was made known that Christianity was to be the religion and law of Iceland. The best descriptions of that act are found in the Saga of Njáll. 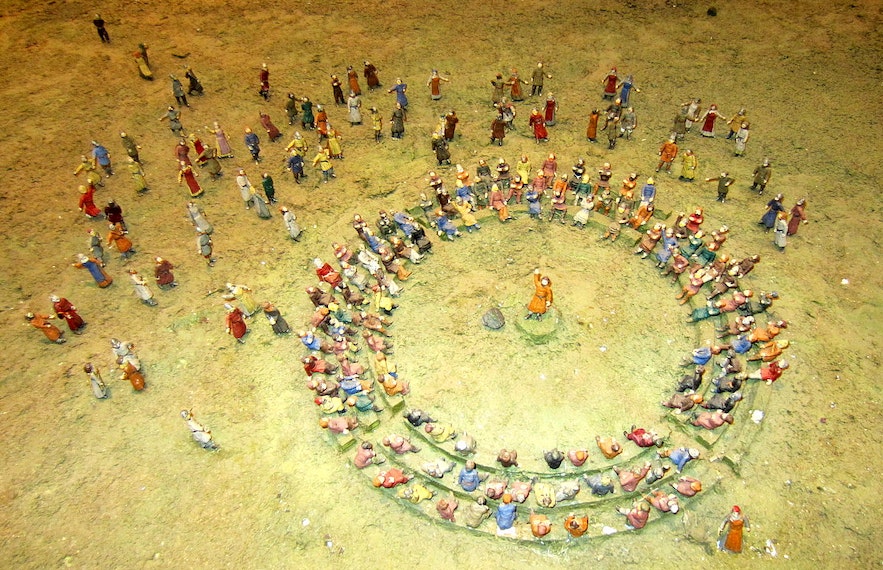 The model of the old parliament at Þingvellir

The Lawspeaker at Alþingi was the main authority, kind of a President of the Alþingi. He was elected for 3 years at a time and was the only secular official in medieval times. He had to read out loud one-third of the laws from Lögberg - the Law Rock each year before they were written down.

It is lovely studying the model imagining what Þingvellir must have looked like filled with Vikings.

The model is on loan from the Culture House in Reykjavík. 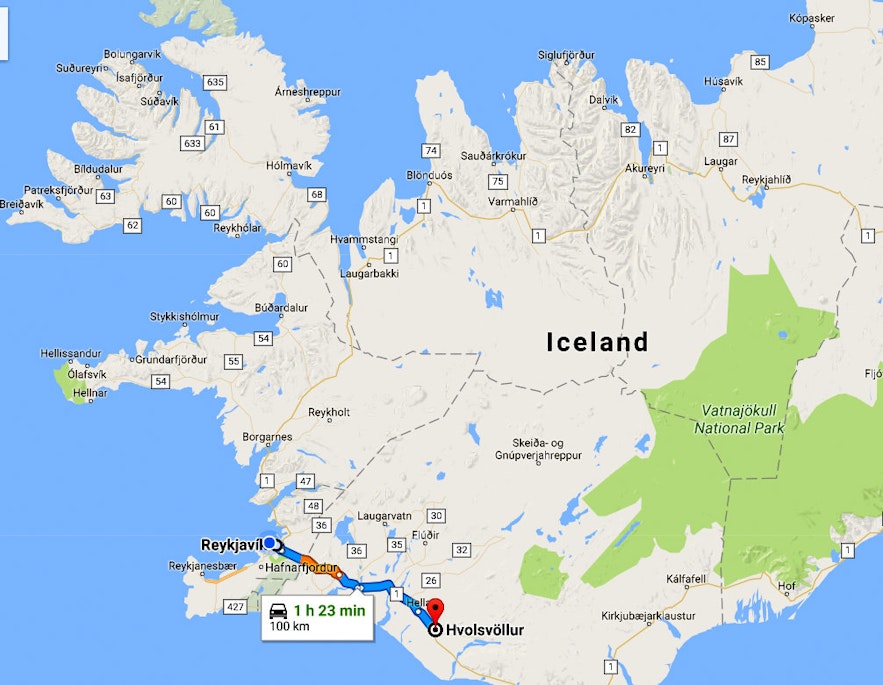 The best way to visit Hvolsvöllur in South Iceland is to rent a car in Reykjavík and drive there, it is only some 95 km away from the capital city.

A visit to the Saga Centre is included in the guided tour The Vikings & The Sagas | A Tour Through History. I have joined this tour and written a travel-blog about it: The Vikings and the Sagas – a fun and educational tour of South Iceland.

Also, check out my other travel-blogs about this area of South Iceland and its neighborhood:

Keldur Turf House in South Iceland - is this the oldest House in Iceland?