Renegades of Whiskey - Inside the Eimverk Distillery Tour

Located just a 10-minute drive from Reykjavík City Centre lies a hidden gem of Iceland. Eimverk Distillery is Iceland’s first and only whiskey distillery. A family-owned business that has been quietly succeeding in the world of liquor since they opened a few years ago. 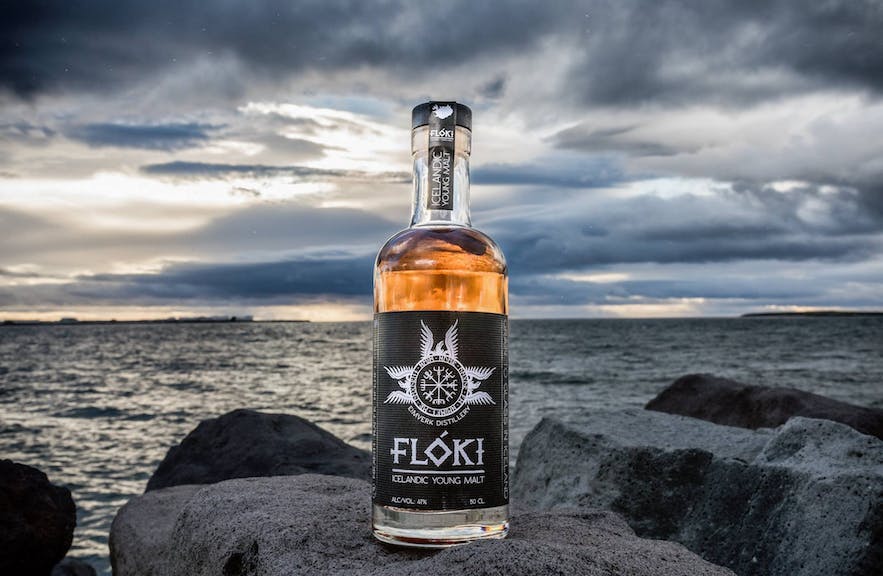 Their products are available in alcohol stores in Iceland and abroad, and they offer a master distiller tour which a few of us here at Guide to Iceland were lucky enough to take part in recently.

On arrival, it seems like an unlikely location to find whiskey. The surrounding area in Garðabær Municipality appears more industrial than your average tourist destination, but once you open the doors, a completely different world awaits you. 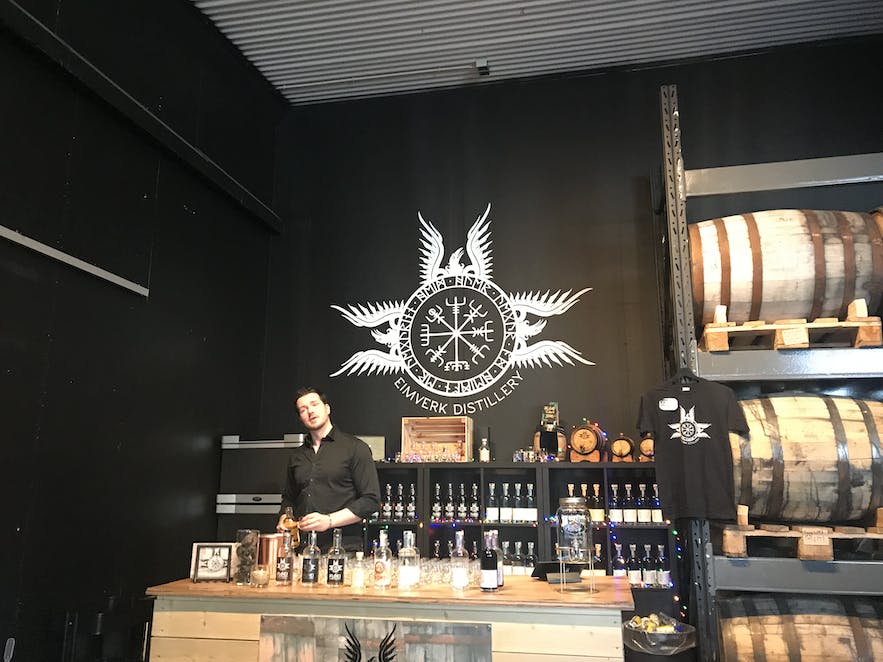 The main area is set up more like a showroom than a factory. The masterminds behind the operation are incredibly proud of their product, and it shows.

The room is cosy, with barrels as tables, bar stools and beautiful lighting, providing a relaxed atmosphere from the very start. Whiskey barrels are stacked neatly against the black walls, filled with product that will eventually cross the lips of whiskey enthusiasts.

As Iceland’s first and only whiskey distillery Eimverk is a perfect destination for whiskey fans and anyone with an interest in Icelandic spirits. 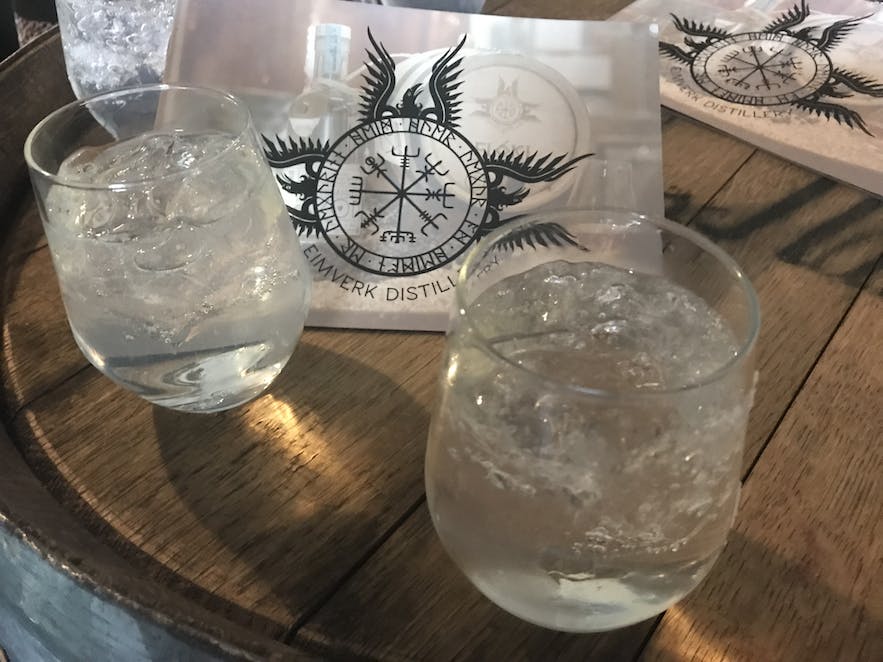 We were greeted by Eimverk's marketing manager Páll, whose warmth and charm made us all feel very comfortable straight away. The first part of the experience was a complimentary gin and tonic, made with Eimverk’s own gin, but we’ll get to that later.

As we sat and sipped, we were privileged to hear the origin story of this successful business. 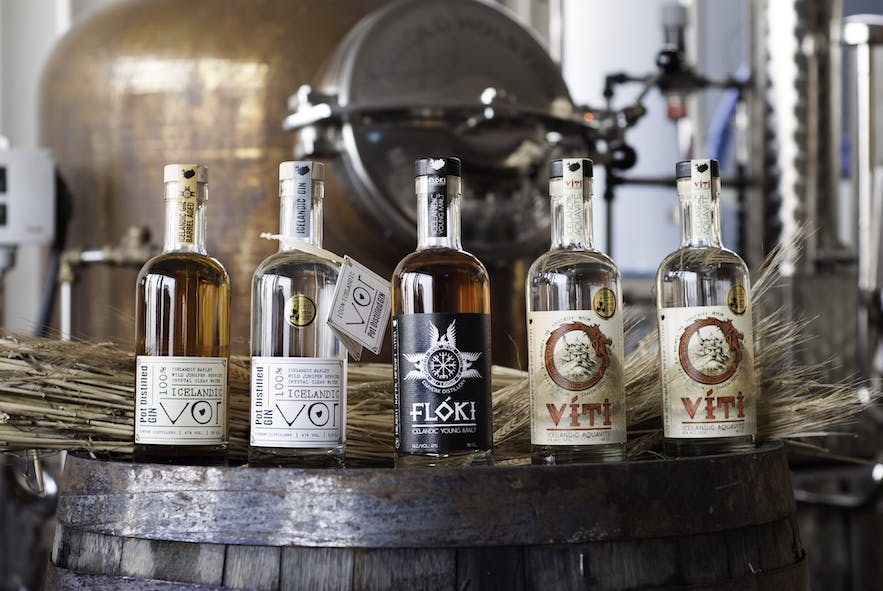 Páll explained that the main ingredient in the whiskey making process, barley, is available in the rugged terrain of Iceland. Icelandic barley has been successfully growing here for 30 - 40 years, but until recently nobody was utilising this resource to make whiskey. All Eimverk products are made from 100% Icelandic barley.

A few years ago, Eimverk started as a kitchen experiment. In small batches, using what was available to them, they made the first product. Páll admits that they were happy with the test, but by the standards they have today they have come a long way. 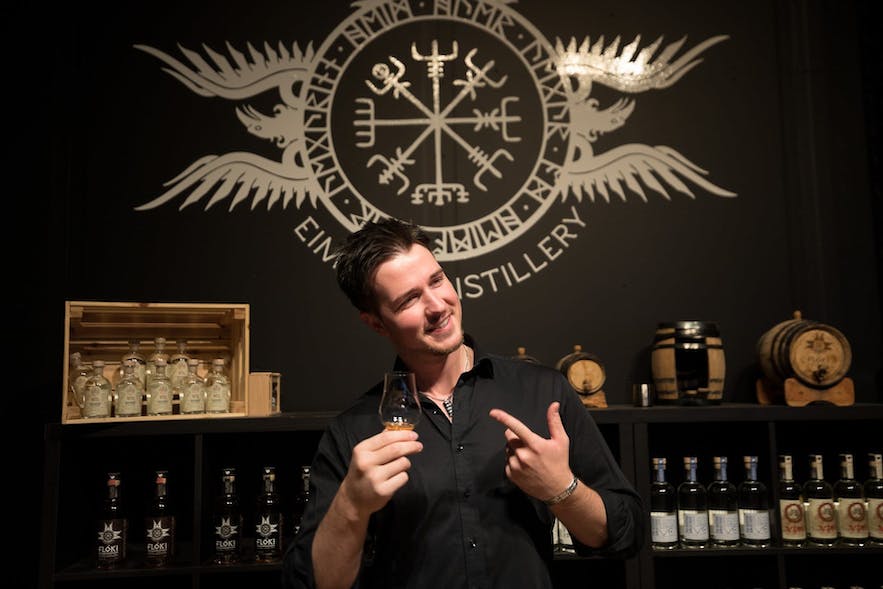 It took a few more dedicated years of research and development before they came up with their first official product called Young Malt.

Although they technically couldn’t call Young Malt a whiskey (Scottish rules state that it can only be called whiskey after it has been aged for three years and one day), they were excited to keep up production.

Three years and one day later they had Iceland’s first and only whiskey, a single malt called Flóki. 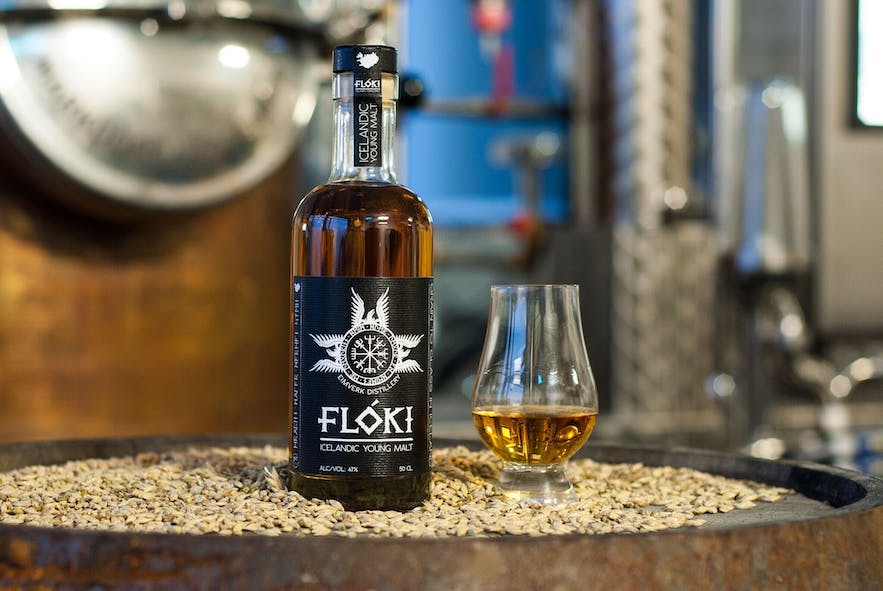 We were then invited to taste Young Malt and Flóki. Páll was very knowledgeable about the traditional tasting process but also encouraged people just to taste it however they want. He reminded us that whiskey is a beverage that’s supposed to be enjoyed. It’s this relaxed attitude that sets this distillery apart from so many others I have been to.

At times tastings can make you feel like a novice. I don’t know how I’m supposed to examine the product and a quick search on YouTube will show you that there’s a whole lot of methods out there, along with some very angry whiskey connoisseurs. 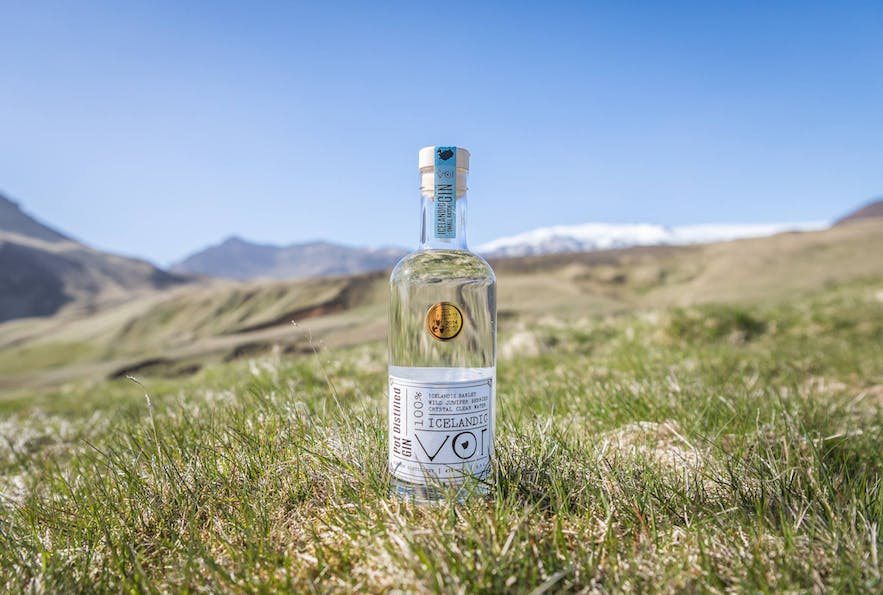 The whole feeling of Páll’s introduction to the products was that there are a few tips to help you, but ultimately it’s up to you to decide if you like it, and that it should be fun, which it was.

While taste testing the Flóki products, we heard a little bit more about the formation of the company including the many awards they have won. 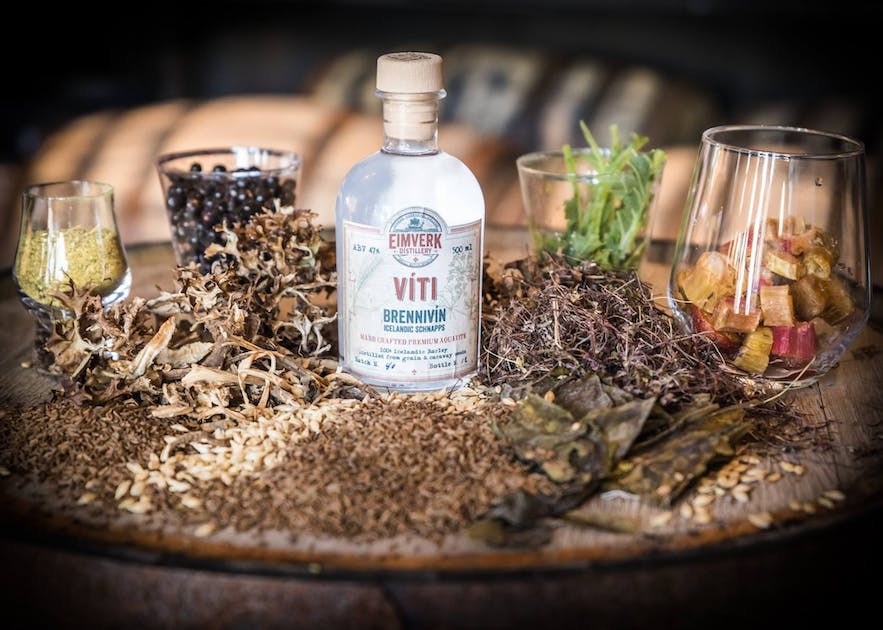 In 2014 they went to the world spirit competition in San Francisco and returned back to Iceland with double gold. This means a majority of the judges gave them the highest possible grade. This is quite an achievement considering they were up against long-established brands.

After tasting the whiskeys we were taken on a tour of the production facility. Beyond a large sliding door at the side of the showroom is where the magic happens.

On entry, the fragrance of hops fills the air and the sound of machinery pumping and distilling provides a soundtrack for the tour. 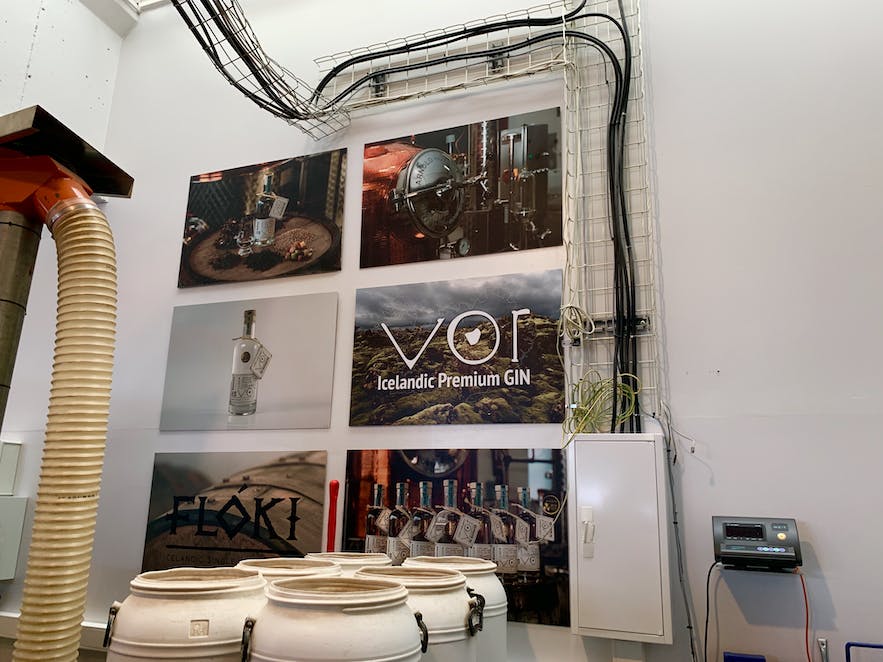 Páll took us through the entire process from barley to spirit. The centrepiece of the tour was the heart of the operation, a large copper still that’s used to separate elements of the mixture to create the end product. A custom built symbol of the ingenuity that went into every inch of Eimverk. 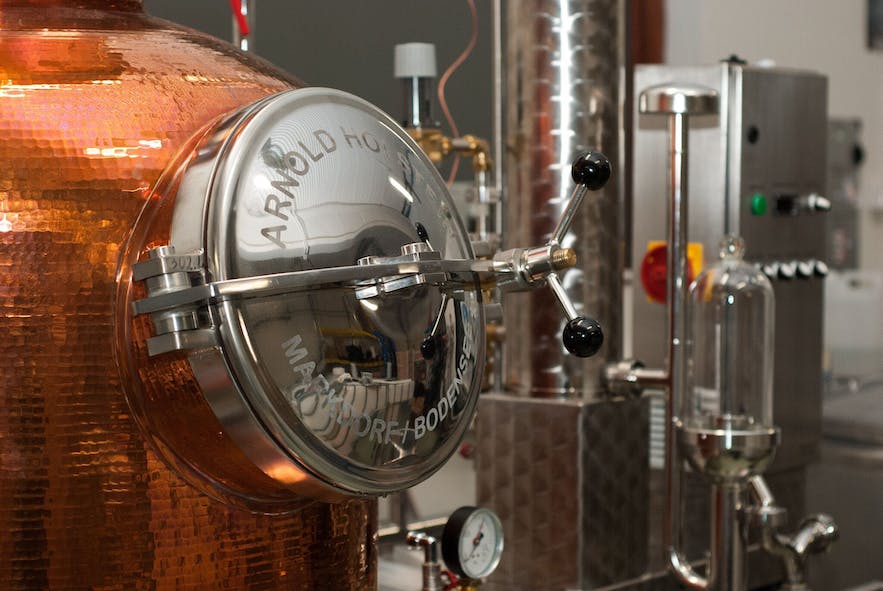 Timings of the machinery are incredibly specific, and we were lucky enough to be in the facility at the time when the first catch (I’m paraphrasing here) was pouring through the machine. A clear liquid that is very high in alcohol and safe to drink. We were allowed to sample a few drops, and I can say it’s potent.

Without giving too much away, the tour was a great way to see the process in action.

After we returned to the showroom, it was time to do more tasting.

We sampled their entire range of whiskey including a unique and smokey blend referred to as ‘Sheep Dung Smoked.’ Yep it’s exactly what it sounds like, and there are some great historical and geological reasons behind it, but you should take the tour and hear that from the experts. 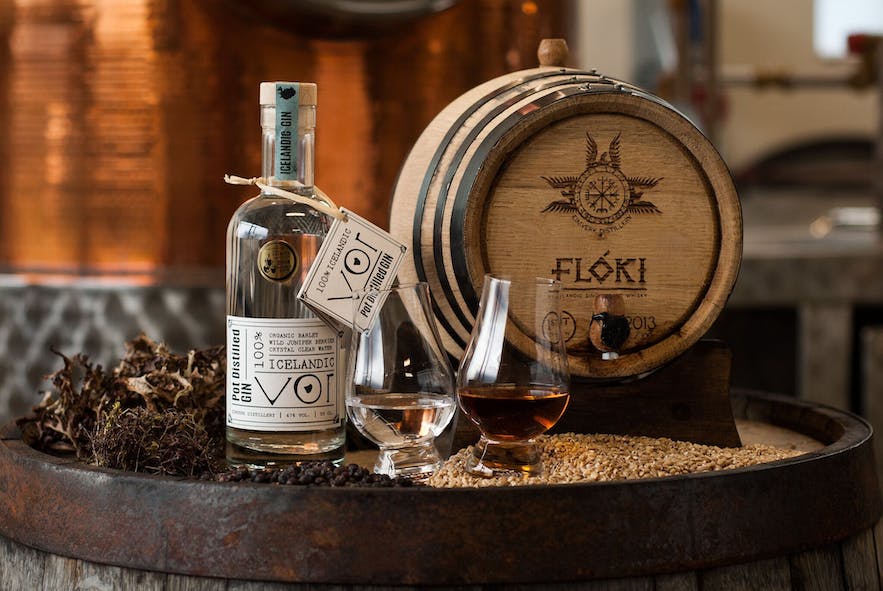 As a whiskey lover myself I can say that Icelandic whiskey doesn’t disappoint. It has all the right notes to it but at the same time offers some unique and intriguing tastes I had never experienced before.

Their original product, the Flóki line of whiskeys isn’t the only spirit coming out of Eimverk. They are also the proud producers of gin.

They make authentic pot-distilled gin, a barrel-aged gin, a Navy strength and a sloe style gin which sort of fits in the dessert wine category. 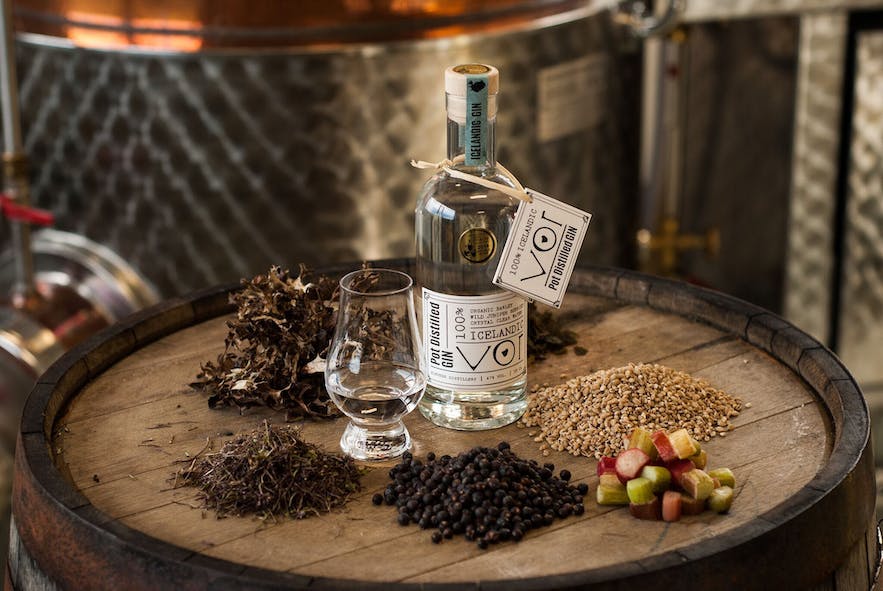 Eimverk have also produced their own take on the traditional Icelandic schnapps called Brennivín. Brennivín is a clear schnapps that has a hint of caraway seed. It’s a ‘must try’ when visiting Iceland.

It famously divides people, some love it, some find it to be a harsh right of passage to take a sip of this liquid that is sometimes referred to as the ‘Black Death.’ I’m actually fond of Brennivín and was very pleasantly surprised by the Eimverk version. I might get in trouble for saying this but I prefer the Eimverk Brennivín. 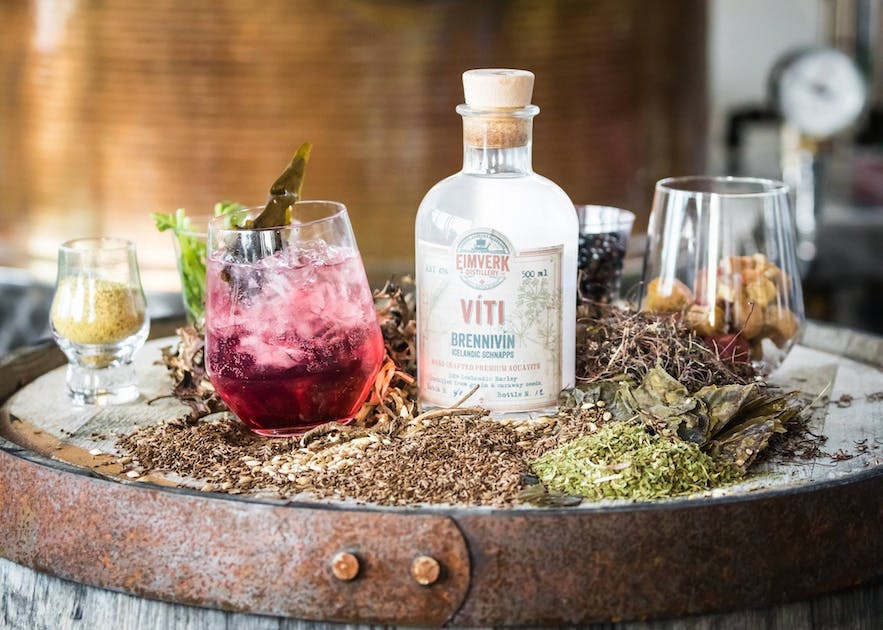 As with any tasting, I would not recommend driving home after. The selection is incredible, and with each spirit having a story, it’s difficult to resist the temptation to sample them all.

The Eimverk distillery tour is an essential experience for those who want to soak up some of the modern culture of Iceland. It’s a couple of hours well-spent learning about how this little nation is leaving a mark on the world’s stage, and having a few cheeky drinks while you do. 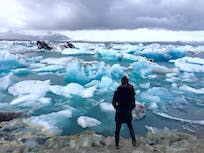 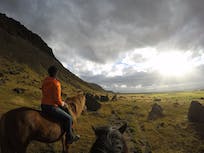 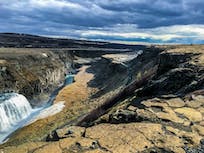