Snorkeling between Continents at the Silfra Fissure

Recently, the Guide to Iceland team journeyed out to the Silfra fissure on an expedition to see an underwater world. Read on to find out all about Guide to Iceland’s snorkelling adventure with Troll Expeditions.

Full disclosure—adventure hasn’t traditionally been something I seek or am good at. As a traveller, you are more likely to find me people watching in a cafe than on a hike somewhere in the wilderness, taking it all in.

There is, however, a part of me that would like to get better at adventure. When I reflect on my life through cataracts as a 90 something,  I want my memories to be more than just the cafes and pubs of the world.

So when I was presented with the chance to take a dive into the waters of the Silfra Fissure, I thought this was as good a time as any to start unleashing my inner adventurer. 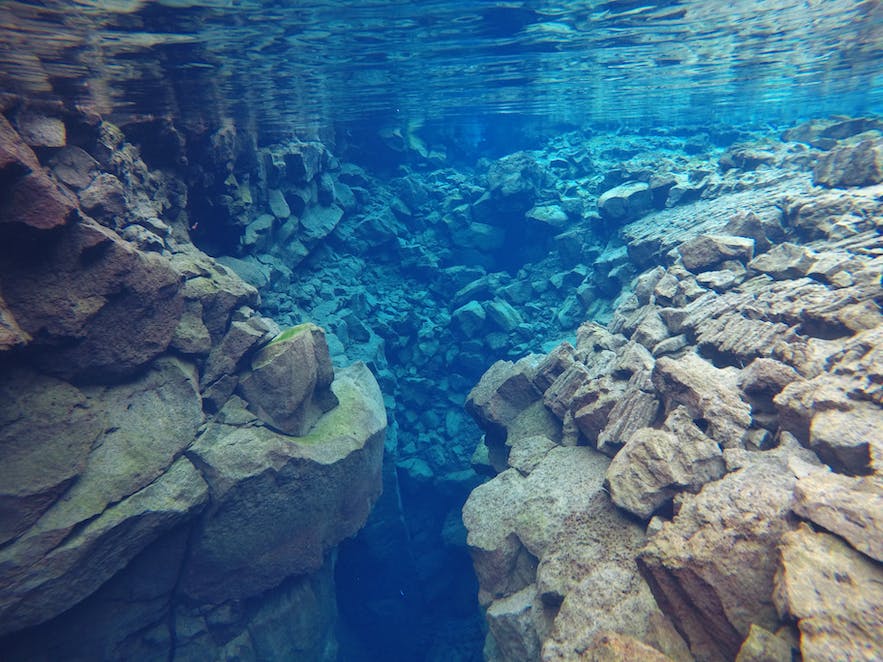 Fate seemed to align with my desire to step out of my comfort zone that day because as we left Reykjavík and headed towards our destination, the entire sky was a bright blue, illuminated by the sun.

If I am to be completely honest, I almost didn’t go. The night before I had performed a stand-up show which finished late and was accompanied by a few celebratory drinks, so I wasn’t really in the best shape I could be in. However, the sun was out, the bus was ready, and I’d already left the house, so I decided to see what this snorkelling thing was all about. 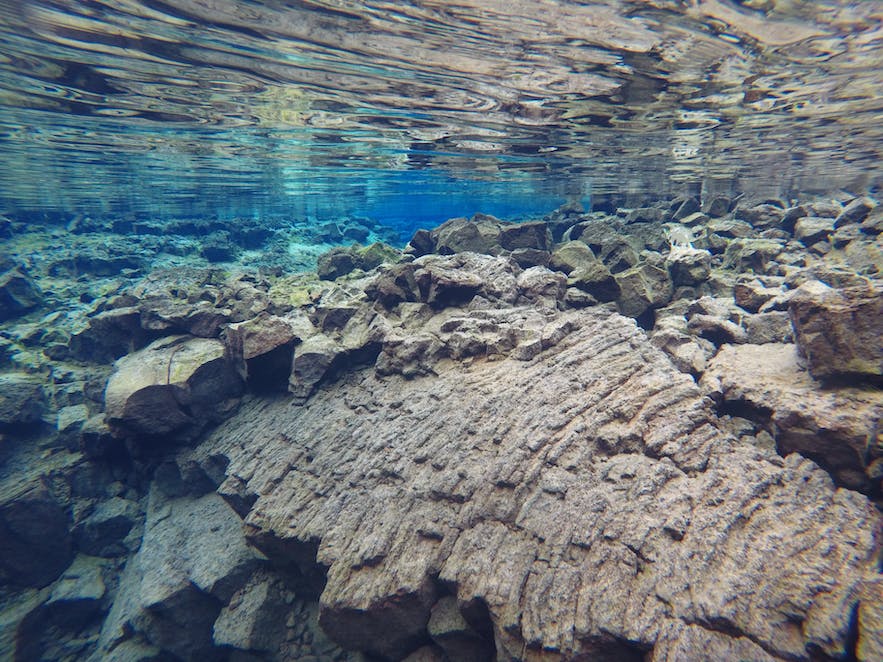 The trip towards Silfra fissure takes you into Þingvellir National Park. As a foreigner who lives permanently in Iceland, I have probably been to Þingvellir more than most people who are born here. 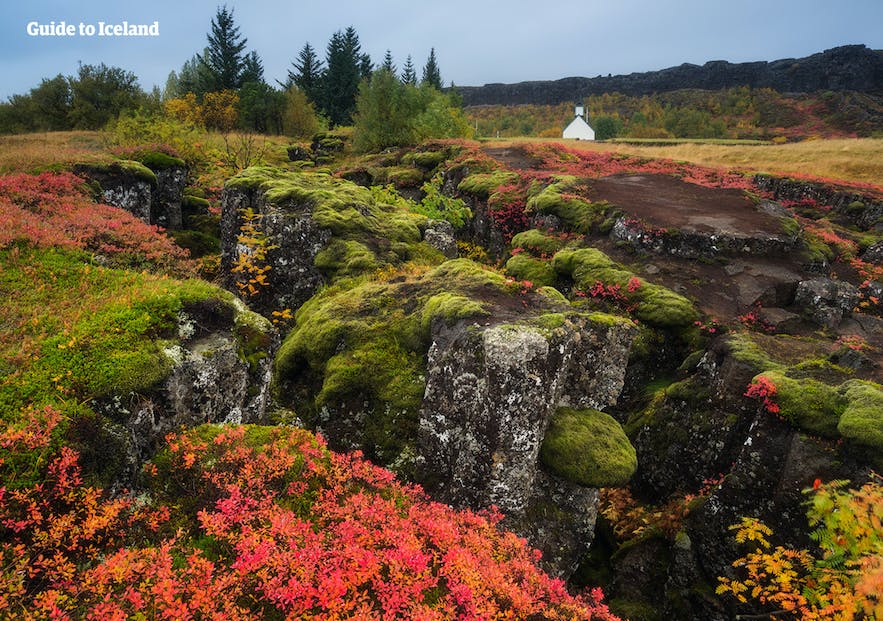 Whenever friends come to visit it is my duty as a responsible host to show them the essential sites of Iceland.

Because Þingvellir is a significant stop on the Golden Circle, I’ve probably looked out over the mountain peaks and stood at the location of the world’s first parliament more than 30 times in the last four years. 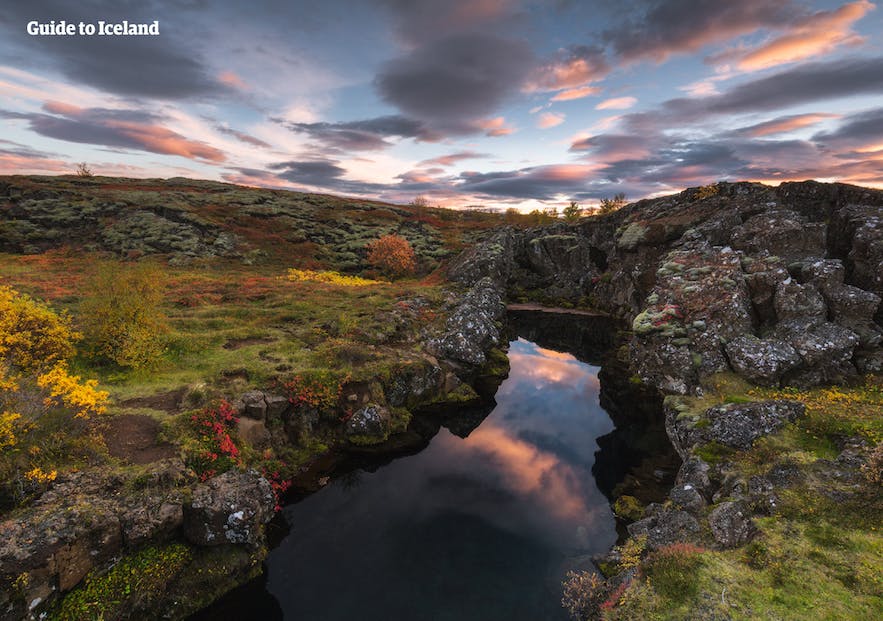 Even though I have been here a lot, I still enjoy it. Þingvellir brings out the history buff in me.

We arrived at the entrance to Silfra. As we stepped out of the bus, the car park seemed dwarfed by the mountainous landscape surrounding us. It reminded me of the first time I came to Iceland on vacation back in 2011. Almost everywhere you look is unlike any other place on the planet. 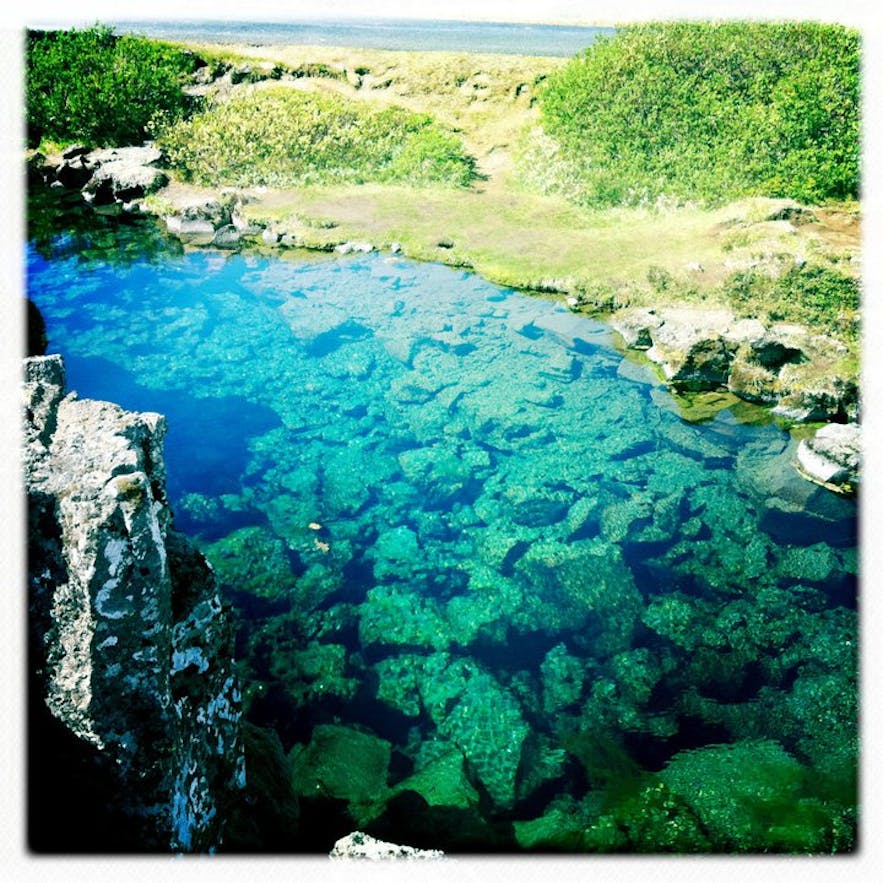 We met our guides for the day who were friendly, confident and had an effortlessly cool quality to them. The kind of people who are much cooler than I will ever be, but they don’t know that so I still have the upper hand for now.

They took us to be fitted for our dry suits. As someone on the huskier side of the size scale, this can sometimes be a part I dread, but there wasn’t a chance to feel uncomfortable at all. The suit allocation process is all about making sure things fit as perfectly as possible, so you don’t let any water in, and in turn, have a good time. 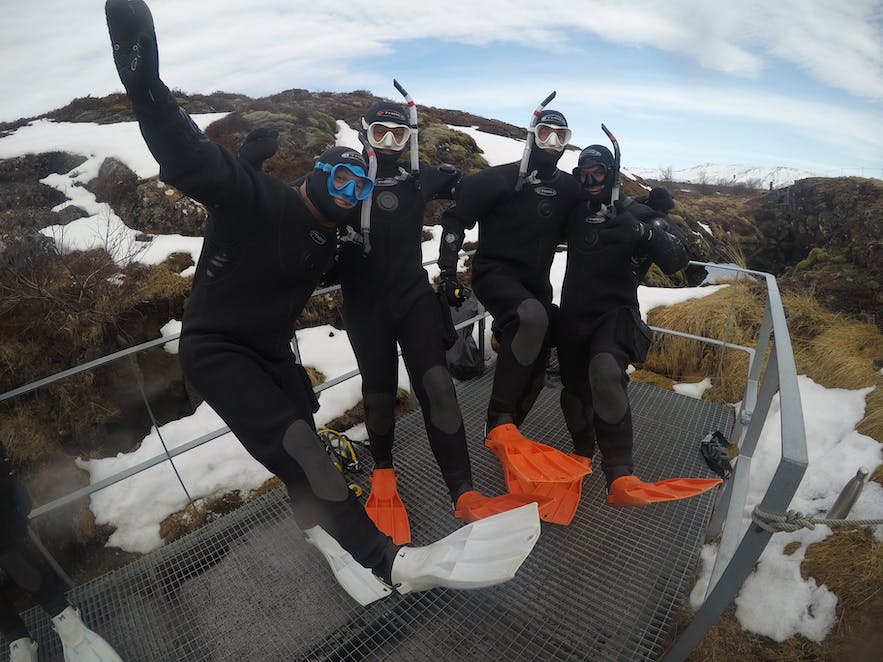 The guides took care of us quickly then gave us a bit of a run through on safety. They also made sure to mention to resist the urge to pee.

We all laughed. Our laughter represented a communal, “yeah right, as if any of us would just pee in the water, we’re not animals.”

The guides then told us that we are about to put on dry suits. As the name suggests, they keep you dry, which means if you happen to pee while in the water, that pee will still be on your clothes when you get out.

Almost instantly about half of us made a quick, ‘just in case’ dash to the bathroom. 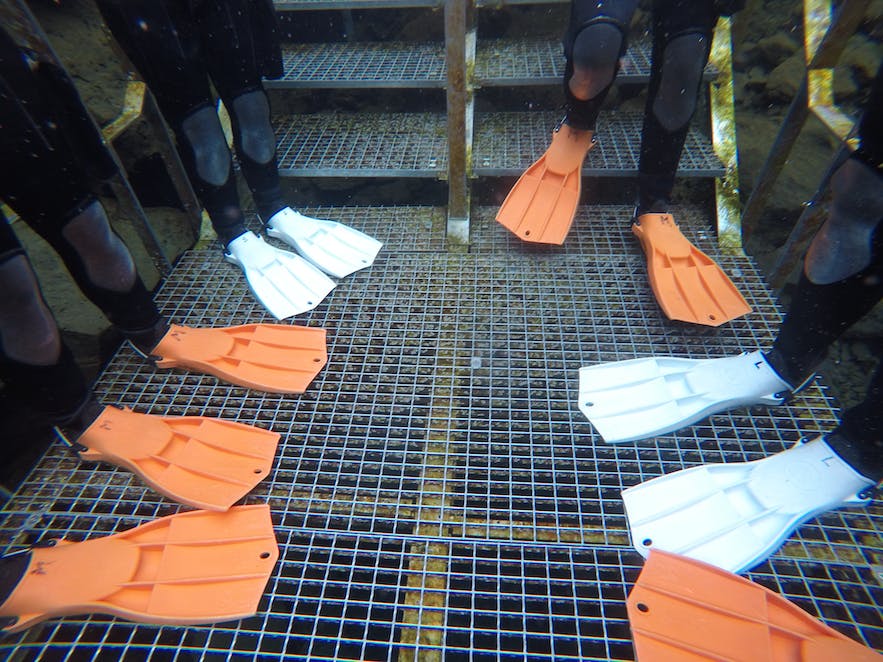 Once we were dressed and looking like a group about to perform a scuba attack in enemy waters, we were lead to the entry point of the fissure.

Silfra is a fissure that opened in 1789. This space between two tectonic plates was caused by movements in the earth's crust. Siflra lies in between the North American and Eurasian plates and is filled with natural spring water. 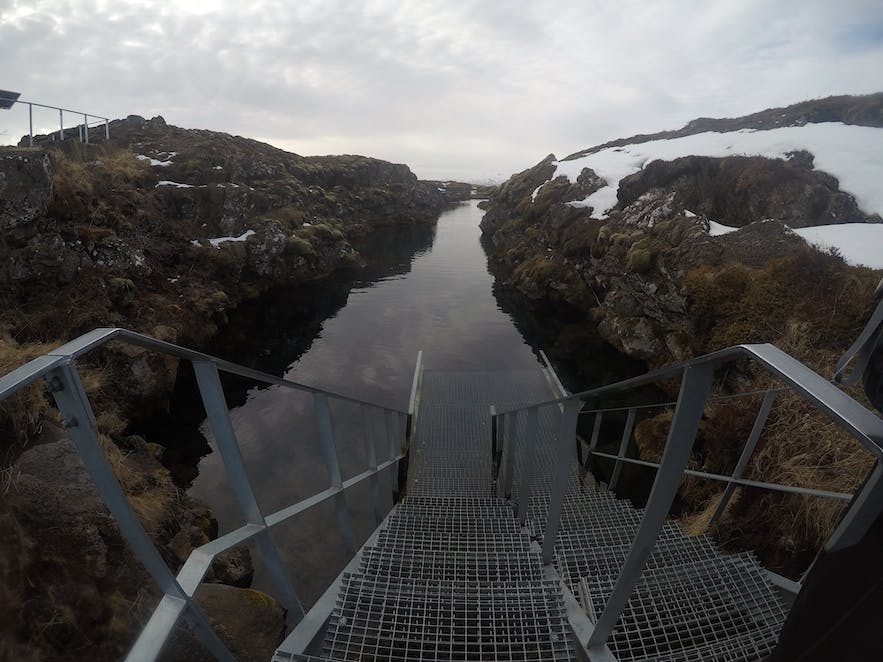 The first thing that strikes you looking into Silfra is just how clear it is. You can see right to the bottom, and as the sunlight reflects the surface of the water it sparkles.

The next thing on my mind was, ‘just how cold is this going to be?’ 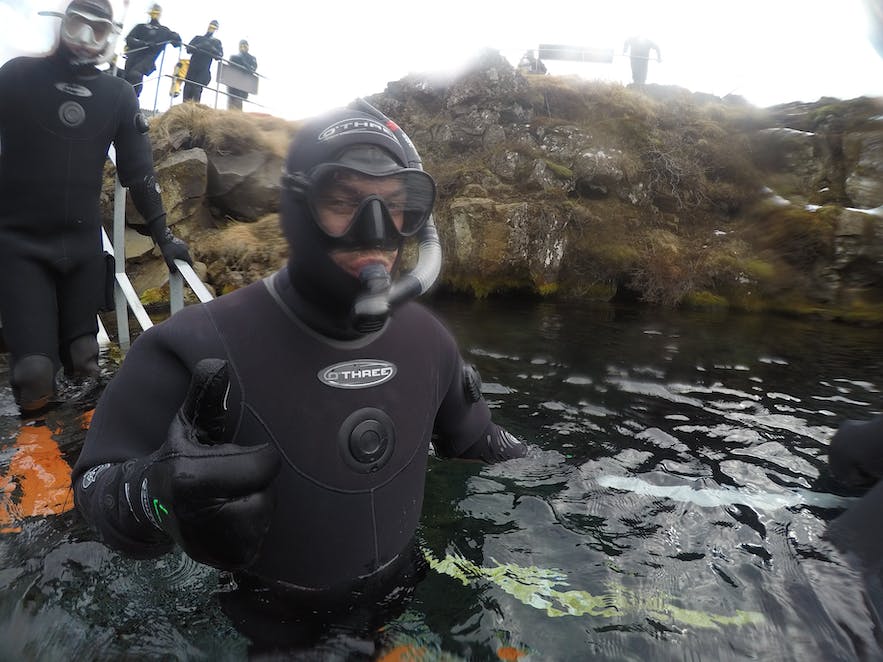 The guides had told us that the water in Silfra never freezes and stays a consistent two to three degrees celcius. This is because the water travels underground before it reaches the fissure. 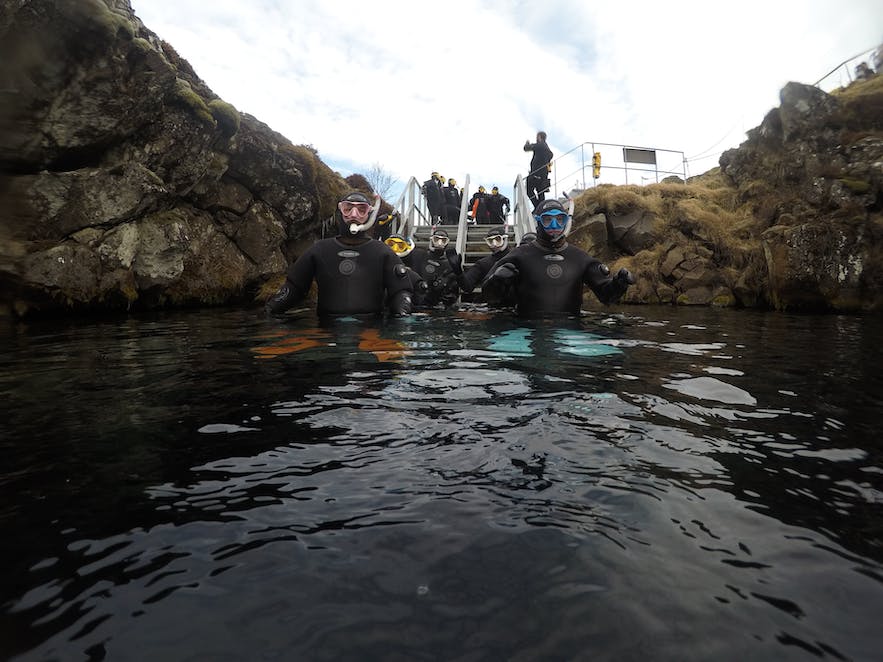 I stepped into the water, and honestly, it just felt cool, not freezing. The only parts of my body where I could feel a little chill were my hands and face. But the gloves and hood take off most of the edge, and you adjust to the temperature over time. 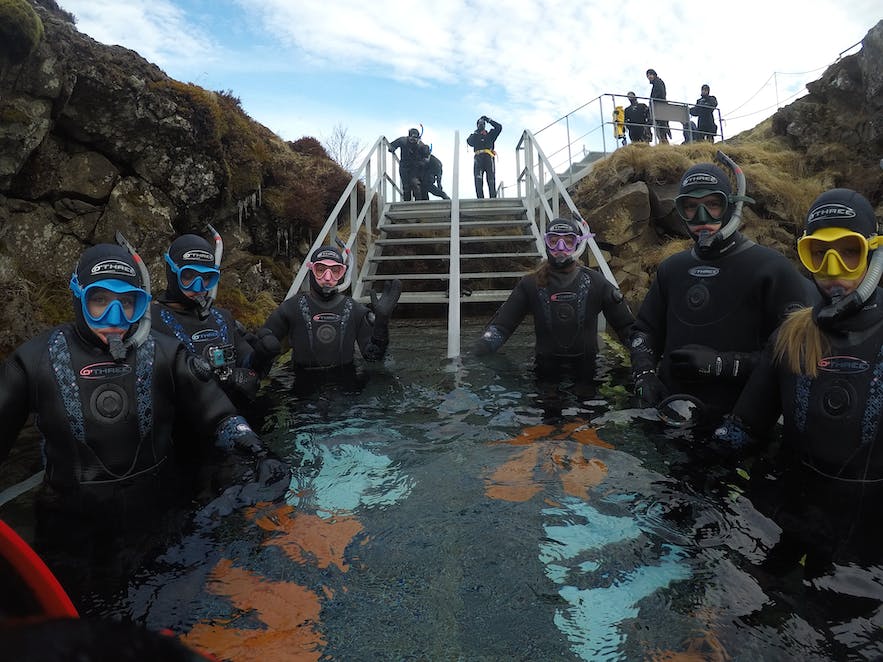 Because the dry suits have air trapped inside them, it’s impossible to sink. The second you enter the water, you are bobbing along with the gentle flow of the current. 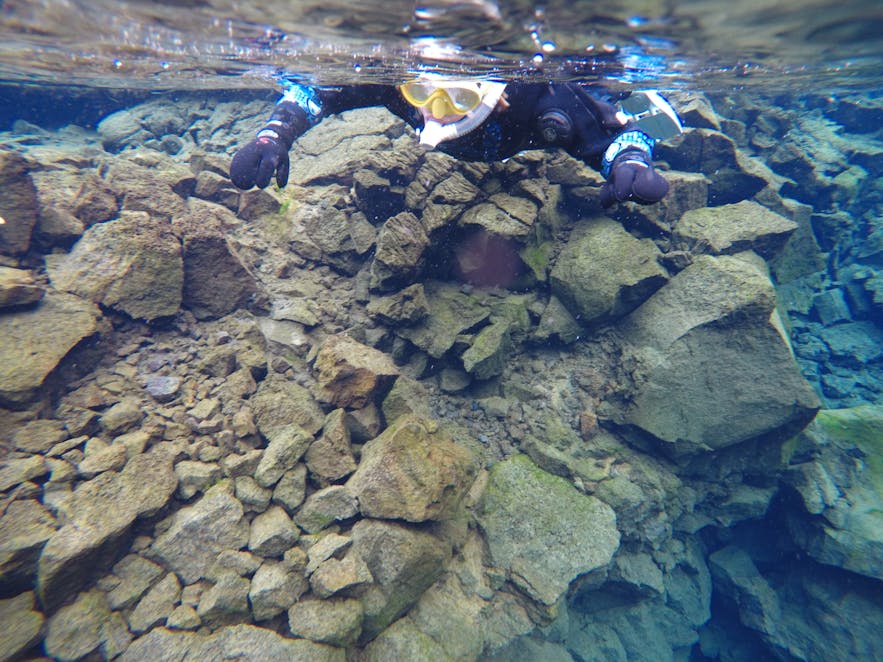 The start of the snorkelling area is a narrow passage where the water isn’t very deep. I felt like this was the perfect start to the experience because it gave me a chance to get used to breathing through the snorkel and following the flow of the stream. 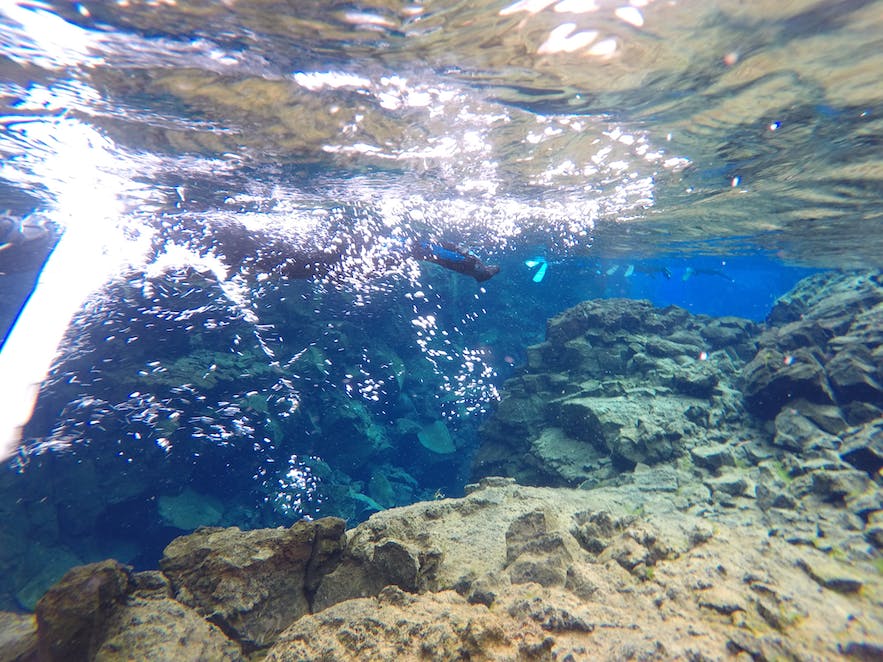 I’m originally from Australia and have snorkelled on the Great Barrier Reef, which is beautiful, but there was always a thought in the back of my mind about sharks lurking outside of my field of vision. Snorkelling in Silfra was the most relaxed I had ever felt in a body of water. 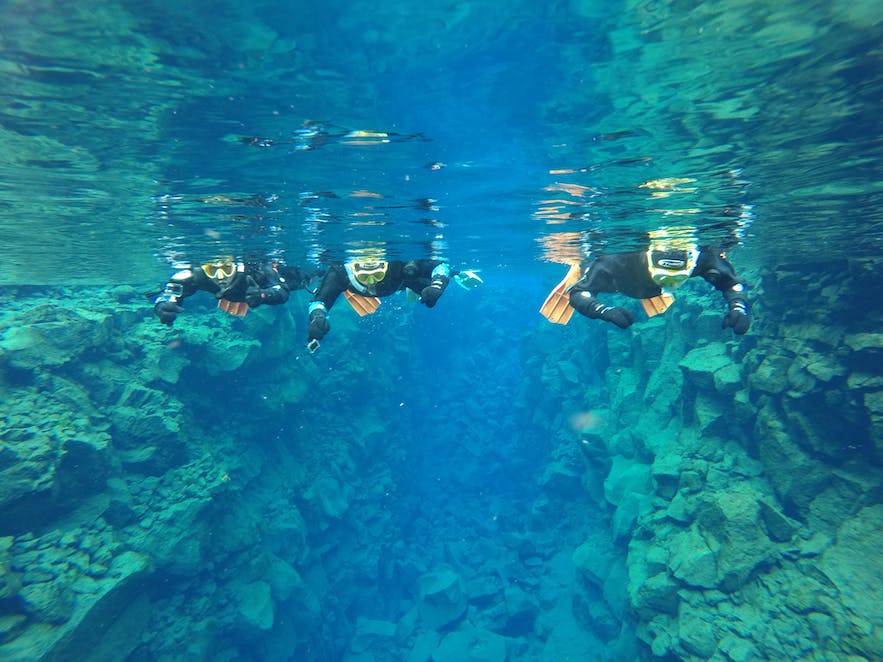 Once we left the narrow passage and entered the main basin, I was taken aback. I had floated around the corner and instantly heard Owen Wilson’s voice in my head saying ‘WOW.’ 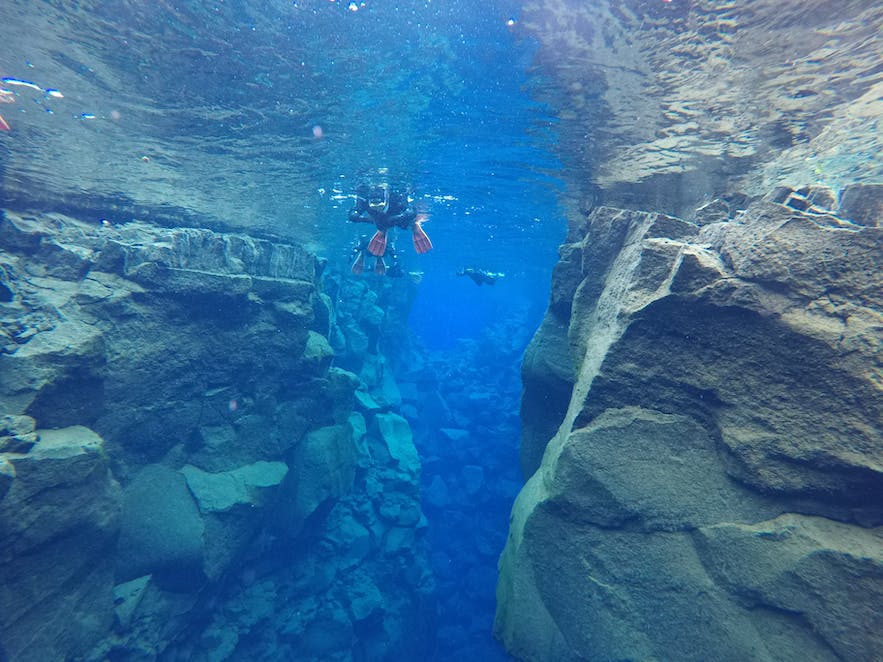 This for me was the moment when said to myself, “I get it.” This is what everyone had been talking about. This is why it’s worth the trip, and making sure your bladder is empty, and getting into all this gear. 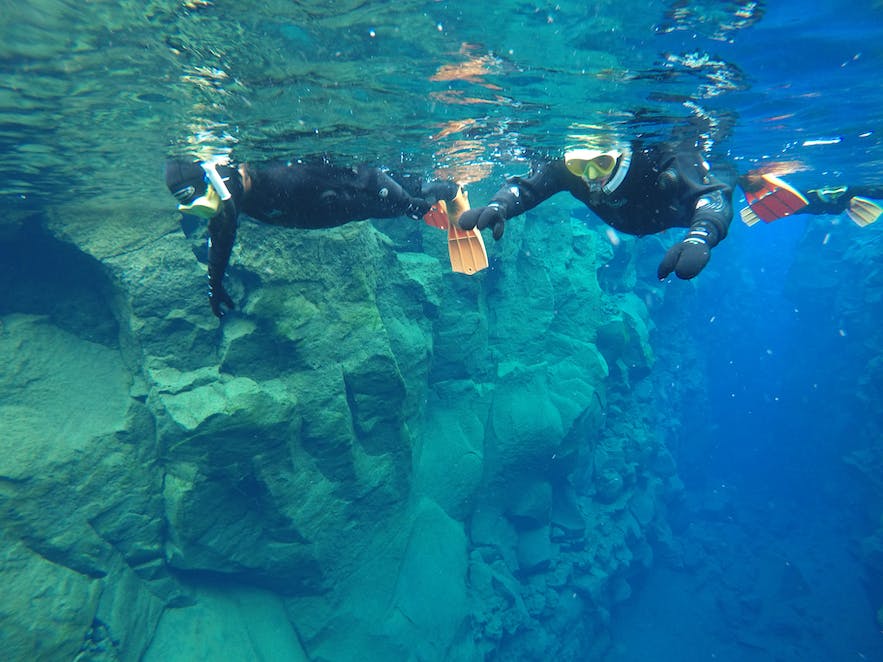 The depth of Silfra made me feel like a tiny speck in an ocean. The blues and greens were unlike anything I had ever seen before. The massive underwater cliffs seemed like they belonged in Narnia. 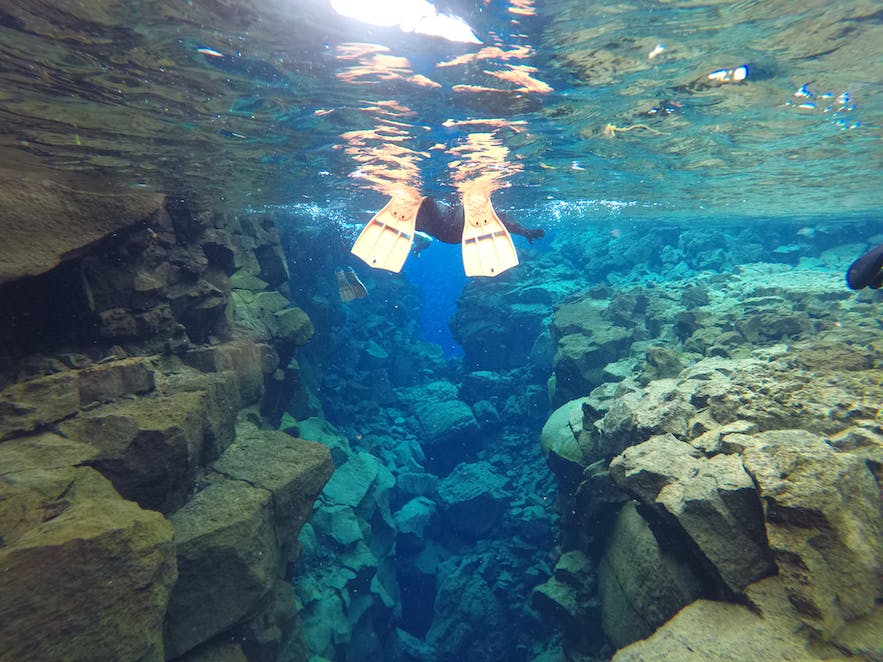 Snorkelling at Silfra made me realise that I’m not as bad at adventure as I think, and maybe I might look for a few other experiences to add to my bucket list. 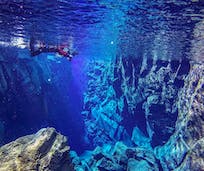 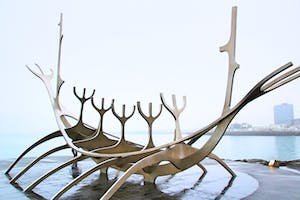 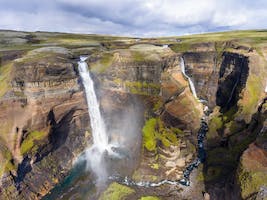 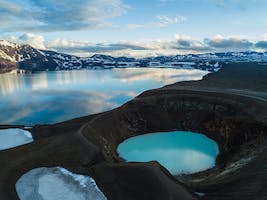 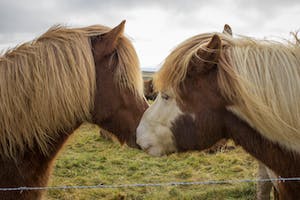