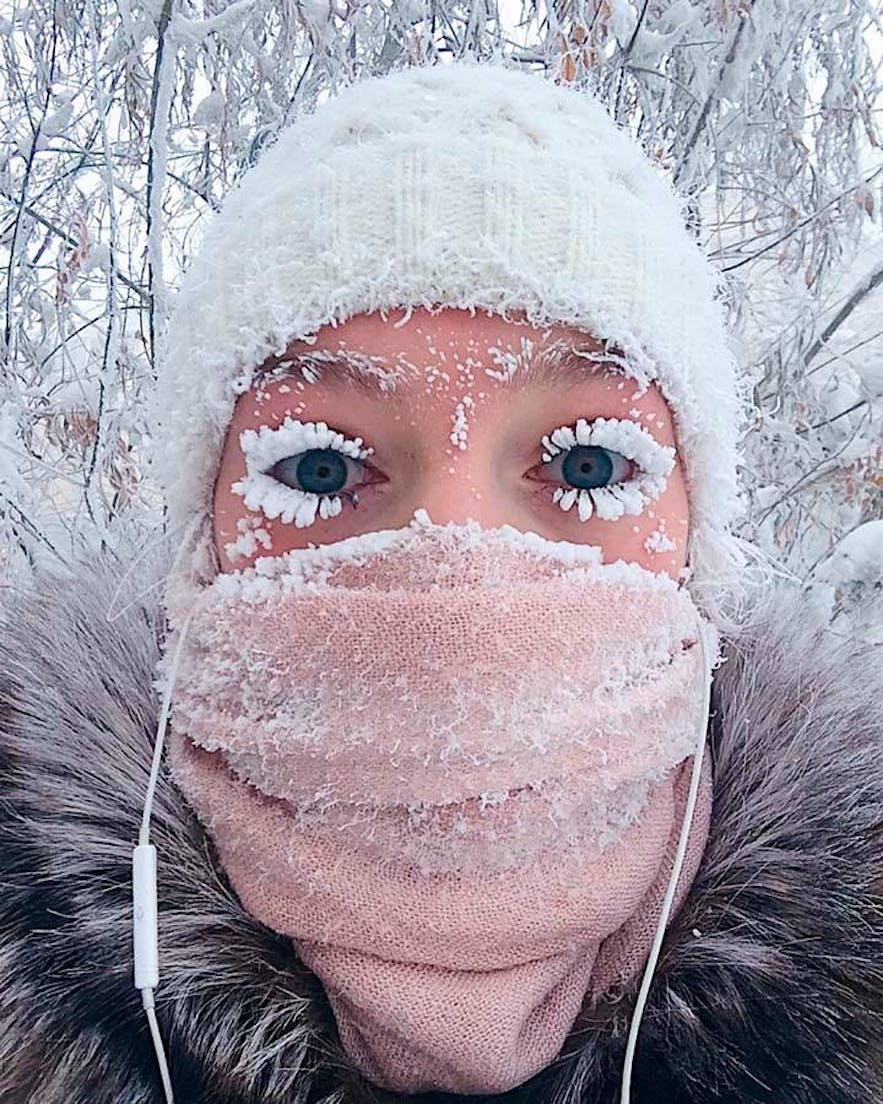 This is not Iceland on the photo. This is Yakutsk in Siberia, Russia, and the girl's name on the photo is Nastya Gruzdeva. My name is Natalia and I was born and live in Moscow. Every time I go to Europe during winter in chilly weather they think I won't get cold because I'm Russian (thanks to such images of cool Siberian girls!). Let me assure you, I'm not that cold-proofed :-)

The difference between winter in Moscow and in Iceland is the type of cold. Yes, we can have -25 or -30 degrees for several weeks in Moscow and down to -60 in Siberia, but we don't have such moist air, the rain that goes from all possible directions and the most important - that crazy wind. There should be a big sign saying "Welcome to Iceland, prepare for THE WIND" at the airport. Also, we have huge amounts of snow, and the snow makes low temperatures feel less freezing.

I have done some mistakes trying to prepare myself for the weather in Iceland and have seen other people doing even worse. Let me share some of the things I learned.

1. Pants. I was stupid enough thinking I won't get cold wearing denim pants in August. And guess what - I was okay. Until I got to highlands and hiked there under a small rain. While you move during hiking, you don't feel it. Just wait until getting back down and sitting motionless for couple hours in the car, feeling that your legs are soaking wet and there you go - you got cold and fell sick! Badly. So tip for the future - never ever wear denim pants or jeans when you are in Iceland, no matter the season. For November trip I decided to be smart and took windproof pants which make me look bumpy, but hey, we should forget about fashion here. They seem very warm and solid. What I forgot is the Icelandic wind which can find any small way to your skin. So until I added 100den tights underneath I was freezing again.

2. Boots. I was torturing practically every local, every guide and every tourist asking what kind of boots I should buy for November in Iceland. What I wanted is not classic hiking boots but something more practical that I could wear in the city too. Quoting the response I received from Troll Expeditions: "We in Iceland always choose shoes based on how well they perform in different scenarios. For example the other day I was guiding all day on the glacier but on the way home I wanted to go in the pub for a beer, then I was super glad I choose my Ice Climbing boots to be black with some cool glimmerish stripes.":-) I made the right choice. First - take the warmest boots possible. You might think it's November and it's not freezing to -25 like in Moscow, so you don't need them too warm. Yes, you do. Even with the woolen socks my feet still would get chilly in the caves and glacier. And of course, protect your ankles. Those young people with naked ankles in Iceland were freaking me out.

3. Hat. Take it everywhere, even in the summer. Who knew the hat should be not that one-layered mix of suspicious materials - the tricky wind will get through it easily. For the same reason, wearing field hat is the game you gonna lose:-) Seen those things flying high to the mountains making poor guides climbing for them to save the clear landscape. Same fun with umbrellas (yes, somebody even brought an umbrella to the tour). Also, if you're going to hike to the cave or on the glacier where the helmet is needed, forget about bobble - helmet won't sit on it.

4. Jacket. Wind and waterproofed. Hood is a must. The interesting part was the difference between winter jackets in Moscow we usually wear and the Icelandic jackets for the same season. In Moscow, I would buy some warm puffy down jacket and add 1-2 layers of clothing under it. In Iceland everybody wears thin windproof outwear adding thick 2-3 layers underneath - vice versa of what we do. I wondered why. I think I got it now - somehow with the wind this way it's warmer. Lesson learned!

5. Gloves. Should be tight binding, not some 1-layered woolen imitation of gloves I use at home knowing I can always put my hands in the pockets. First, you gonna take photos and your fingers will magically turn into icicles. Second, if you're a smoker, you doomed. Therefore I also bought mittens that would cover half of my hand - what a savior.

6. Scarf. Choosing that was not easy because I don't like them being too thick and blocking my neck from moving and my throat from breathing. But this time I thought I would sacrifice the lack of movement and embrace the risk of potential suffocation - and I was right. That thing was helpful with protecting my face from the black sand flying in the air during the storm at Reynisfjara, but that's another story.

As a conclusion, I'd add that the best thing to stay warm in Iceland is to be born Icelandic ​​​​​​​:-) People living in Iceland seem never getting cold wearing something twice as light. Still a mystery.