Kirkjufell, or 'Church Mountain', is a distinctly shaped peak found on the north shore of Iceland’s Snæfellsnes Peninsula, only a short distance away from the town of Grundarfjörður. It is often called ‘the most photographed mountain in Iceland’ due to its dramatic formation and perfect coastal location.

Peaking at 463 meters, 1519 feet, Kirkjufell is an impressive landmark. Throughout the centuries, Kirkjufell’s striking slopes have acted as a visual landmark for seafarers and travellers. More recently, it has attracted amateur and professional photographers alike.

Within walking distance from Kirkjufell is the serene and perfectly located waterfall Kirkjufellsfoss, or 'Church Mountain Falls', an excellent subject for photographers who can easily frame the mountain in the background. Despite its relatively diminutive height, Kirkjufellsfoss’ three steps, gentle flow, and dramatic differences between seasons make it as impressive as some of Iceland’s larger waterfalls. 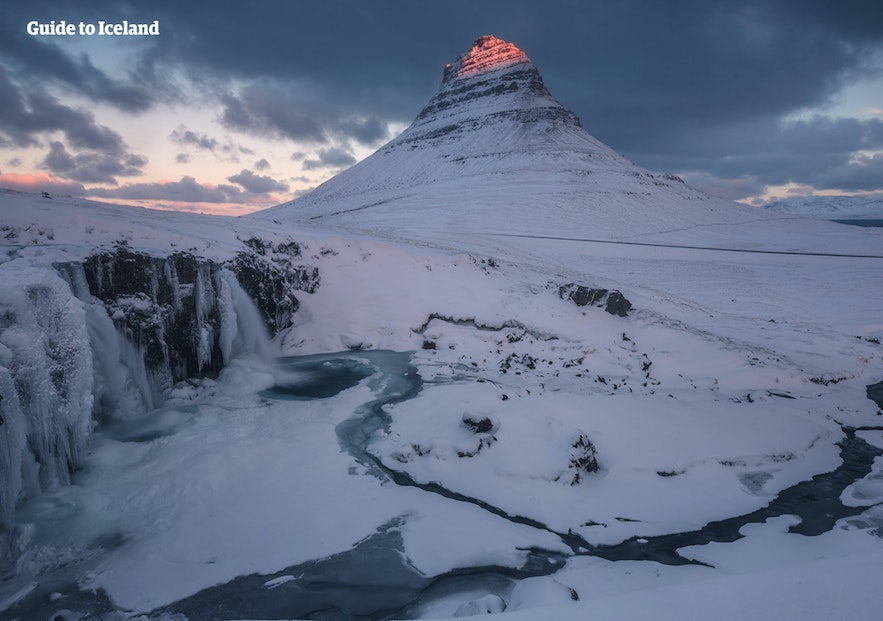 Fans of the HBO series Game of Thrones will recognise Kirkjufell as a shooting location from Season 7 of Game of Thrones. The mountain is showcased in the ‘Beyond the Wall’ episode when Jon Snow, The Hound, and Jorah Mormont, among others, brave the wilderness in hopes of catching an undead wight.

There is a fairly steep trail to the top of Kirkjufell, from which there are magnificent panoramas of the surrounding fields, coastlines, and rivers. The mountain takes roughly an hour and a half to ascend, with another one and a half hours needed to get back to the bottom.

Given the steep elevation and treacherous trail, you should only hike Kirkjufell if you are a highly experienced and confident mountain climber, preferably in the company of an expert guide. Sadly, there have been three fatal accidents on the mountain, most recently in 2018.

Kirkjufell is very close to Grundarfjörður, a small town on the Snæfellsnes Peninsula, which is just over two hours drive from Iceland's capital city, Reykjavík. From Grundarfjörður, one travels a few minutes west down Route Snaefellsnesvegur 54 to the base of Kirkjufell. Visitors have plenty of parking options to choose from, all free of charge.