Here, the icebergs which fill Jökulsárlón glacier lagoon wash up on shore, standing dazzling and defiant in stark contrast to the black sand beach. It is, therefore, a favourite amongst photographers, nature-lovers, and wildlife-enthusiasts. Many seals call this beach home, and it is one of the best places in the country to see orcas from the shore.

Breiðamerkursandur is a glacial outwash plain located in the municipality of Hornafjörður. The sand stretches approximately 18 kilometres along Iceland’s South Coast, more specifically from the foot of Kvíárjökull Glacier to the famed glacier lagoon Jökulsárlón, that nests by the foot of Breiðamerkurjökull Glacier.

Both glaciers make up part of the 30 outlets of Vatnajökull, Europe’s largest ice cap and the central feature of the Vatnajökull National Park. Many of these are seen en route to the Diamond Beach as you travel along the South Coast.

The outwash plain was formed when three of Vatnajökull’s outlet glaciers, Breiðamerkurjökull, Hrútárjökull and Fjallsjökull, flowed forward due to volcanic activity and ground the rocks of the underlying surface, creating and pushing forward the glacial sediments.

Such sand plains are a common part of the Icelandic landscape, due to the island being volcanically active as well as boasting numerous ice caps. The terminus (the tip of a given glacier) also dug deep into the ground and left what is now the Jökulsárlón glacier lagoon. Although now the deepest lake in all of Iceland, it only began to form in 1935.

The glacier lagoon and Diamond Beach are fantastical sites, however, the rate of their expansion is, unfortunately, a consequence of climate change. With the rate that the glaciers are melting, there may be no ice left at either site within decades. 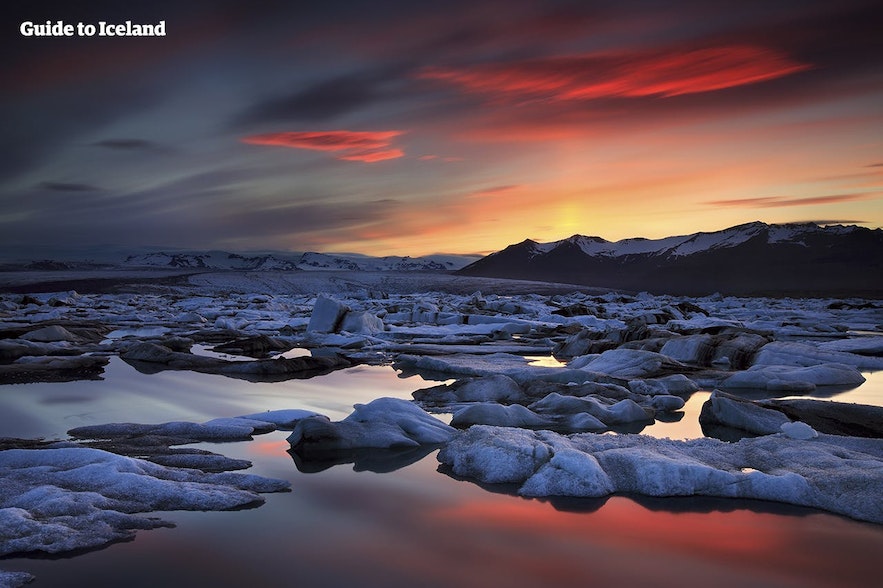 Jökulsárlón glacier lagoon is one of the most famed and visited attractions in Iceland. Floating on the lagoon are enumerable icebergs that have broken off the resident glacier, creating an ever-changing scenery of incredible allure.

The river Jökulsá connects the lagoon to the Atlantic Ocean, meaning that these icebergs eventually drift out to sea where they are polished by the waves before floating back to the black sands of Breiðamerkursandur. The name ‘Diamond Beach’ thus comes from the white ice on the black sand appearing like gemstones or diamonds, as they often glisten in the sun and sharply contrast their jet black surroundings.

The risk of injury and illness in the form of hypothermia is so great that extortionate fines exist to deter any ‘rebels’ looking for a thrill-seek. These have only come about due to serious incidents, to protect not only tourists at the lagoon but guides and staff who may feel obligated to embark on a dangerous rescue if they see someone at risk.