Búðir is a small hamlet in the municipality of Snæfellsbær on the westernmost tip of the Snæfellsnes Peninsula.

Take a tour of the Snaefellsnes Peninsula.

The hamlet is located in the lava fields of Búðahraun in the region of Staðarsveit in west Iceland. Búðir consists of a church and a country hotel but is otherwise uninhabited.

Búðir was once a prosperous fishing village and one of Snæfellsnes' most active trading posts. Medieval sources describe Búðir as one of Iceland's major ports and archaeological evidence suggests portal activity dating back to the earliest settlement of Iceland.

In the beginning of the 19th Century, the trading post was abandoned but today, the area prospers economically because of tourism.

Búðir boasts the vast lava field Búðahraun that reaches east from the hamlet towards the sea by Faxaflói Bay, and west to the reef of Hraunlandarif. The lava's source can be traced to the 88-metre tall volcanic crater Búðaklettur which is located in the middle of the lava field. The crater has an opening on its south-west side, where one can enter the 382-metre long Búðahellir Cave.

Búðahraun is acclaimed for its rich flora, boasting approximately 130 different plant species. These include rare and protected species. The eastern part of the lava field has been an official nature reserve since 1977.

Búðir also consists of a field of tall, windswept grass, and a beach of fair-coloured sand dotted with jet black lava rocks. Hótel Búðir is a charming country hotel where visitors can enjoy the reclusiveness of the surrounding area.

All that remains of Búðir’s former community is the black wooden church Búðakirkja. A man named Bent Lauridtsen got a bishop’s permit in 1701 to build a church in the area. When it came to deciding the location, an old woman reportedly suggested making a man spin in circles until he became dazed and then have him shoot three arrows into the air. Where the third arrow landed, the church should be built.

A small turf chapel was built two years later, where it stood until it was dismissed by orders of the Danish King Christian VIII in 1819. Several residents fought for the reclamation of the church until in 1849 the priest’s council allowed for the construction of a new house of worship—as long as the residents of Búðir would fully finance the project and see to its maintenance.

A woman named Steinunn had meticulously cared for the artefacts from the old chapel, which resulted in the church still donning some of its original items, such a door latch engraved by Bent in 1703. Renovations were made in 1951, and again in the 1980s when it got slightly relocated and reconstructed according to its original Danish design. 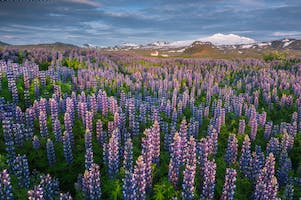