Reyðarfjörður is a town of 1,102 people in the East Fjords of Iceland.

Despite the omnipresent climate of rain and fog in East Iceland, Reyðarfjörður will often have the highest temperatures in the country on a clear summers day. As with most towns in the region, Reyðarfjörður is surrounded by dramatic mountainscapes and beautiful coastlines.

Reyðarfjörður also served as the second-largest Allied military base in Iceland during the Second World War due to its location and natural harbour. After the Second World War, the town's activity quietened down and most inhabitants went back to fishing. There is a World War II museum now housed at the old base where guests can learn more about Iceland's role during the war.

Since 2008, Reyðarfjörður has been home to the Fjardaál aluminium smelter. Employing 450 locals and producing over 900 tonnes of aluminium a day, the townsfolk have championed the smelter for bringing further development to the town. This is in contrast to many Icelanders who are concerned with the environmental impact of such smelters. 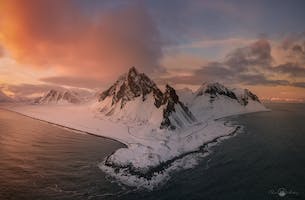