Reynisfjara is a world-famous black-sand beach found on the South Coast of Iceland, just beside Vik í Myrdal, which is the southernmost village on the mainland of Iceland.

Visits to it are included on many South Coast Tours and almost all Road Trips in Iceland will also take you there.

With its enormous basalt stacks, roaring Atlantic waves, and stunning panoramas, Reynisfjara is widely considered to be the most beautiful example of Iceland’s black sand beaches. In 1991, National Geographic voted Reynisfjara as one of the Top 10 non-tropical beaches to visit on the planet. 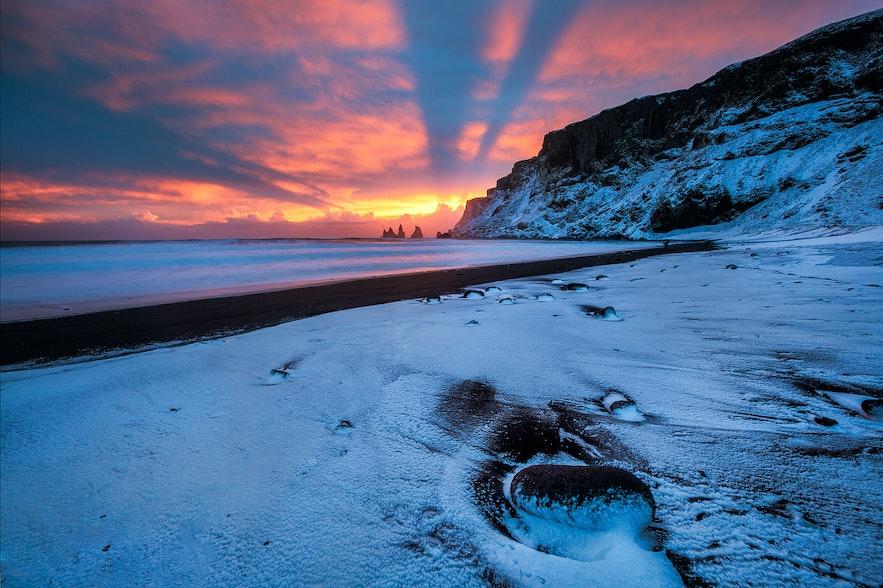 Reynisfjara is around 112 miles (180 kilometers) from Iceland’s capital city, Reykjavik, and is a popular stop-off for those taking a sightseeing tour along the popular South Coast.

Driving to the beach is particularly easy, taking approximately two and a half hours from the capital on Route 1, so it can easily be done within half a day, or a full day combined with other features. If you prefer to drive there yourself without joining tours be sure to go here to browse the largest selection of rental cars and find the cheapest car rental prices in Iceland. 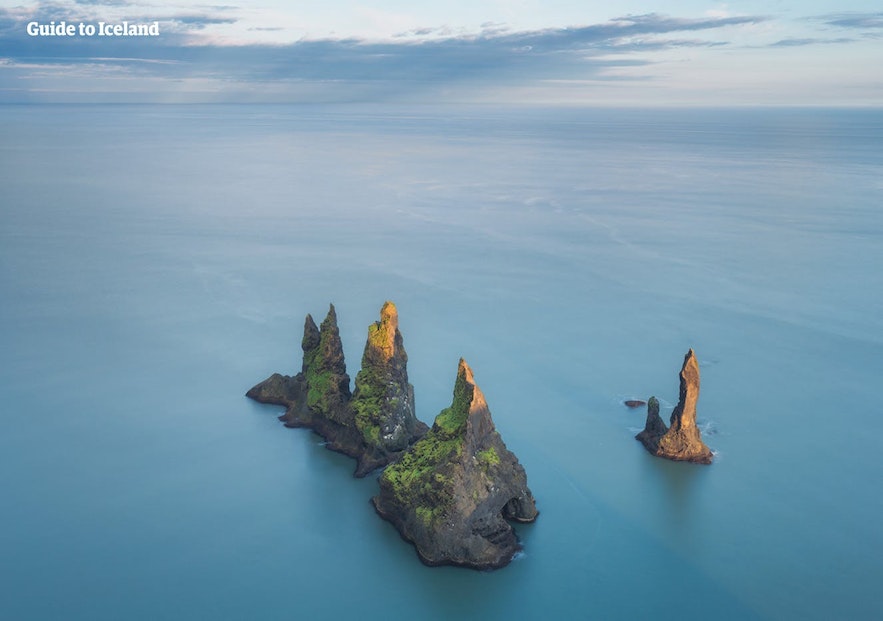 According to local folklore, these large basalt columns were once trolls trying to pull ships from the ocean to shore. However, these trolls were dim and went out too late in the night; dawn broke on the horizon, turning the trolls into solid stone. 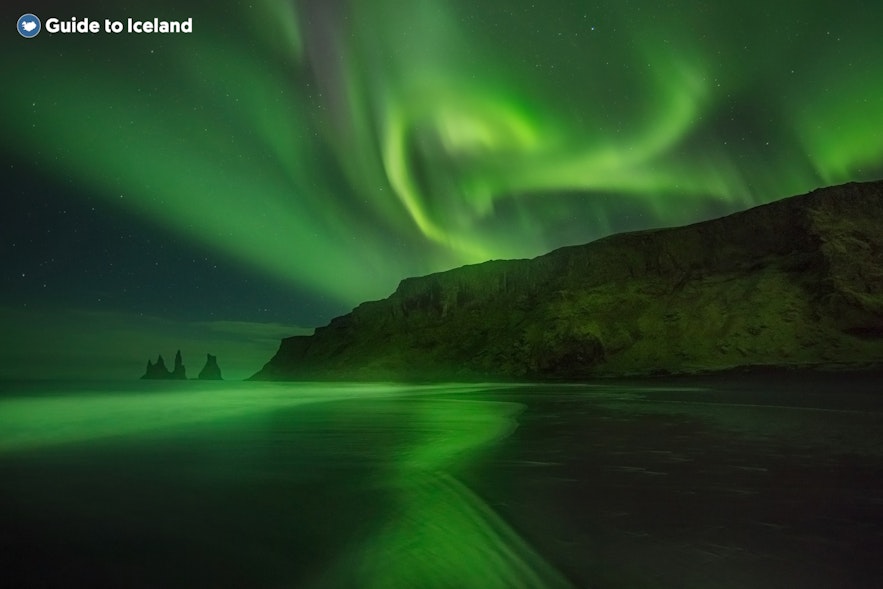 So mesmerizing are Reynisdrangar that they were featured in Season 7 of the HBO Series Game of Thrones, you can spot them in a few scenes shot ‘North of the Wall’.

The sea stacks themselves are home to thousands of nesting seabirds. Species that can be found nesting on the cliffs include puffins, fulmars, and guillemots, making it a must-see location for birdwatchers.

Reynisfjara beach is located conveniently in the middle of the South Coast, adjacent to the charming village of Vik. This means that those taking the Ring Road around the country, or else those heading to the Jokulsarlon glacier lagoon, will pass it, and are encouraged to make a stop. 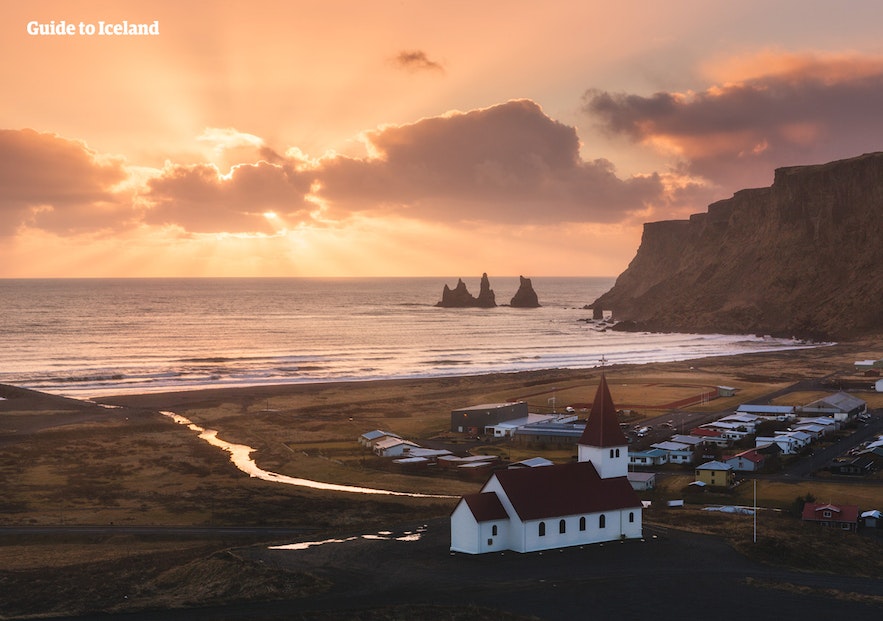 The closest major landmark is the Dyrholaey rock arch and cliffs. While many seabirds are found at Reynisfjara, it is nothing compared to the numbers here. From May to August, it is one of the best places to see puffins from land.

En route to Reynisfjara from Reykjavik, you will discover waterfalls, such as Seljalandsfoss and Skogafoss, and glaciers, such as Eyjafjallajokull and Myrdalsjokull. Further along the South Coast, you will reach the Vatnajokull National Park, with its many glacier tongues, glacier lagoons, black sand deserts, and the incredible Skaftafell Nature Reserve. 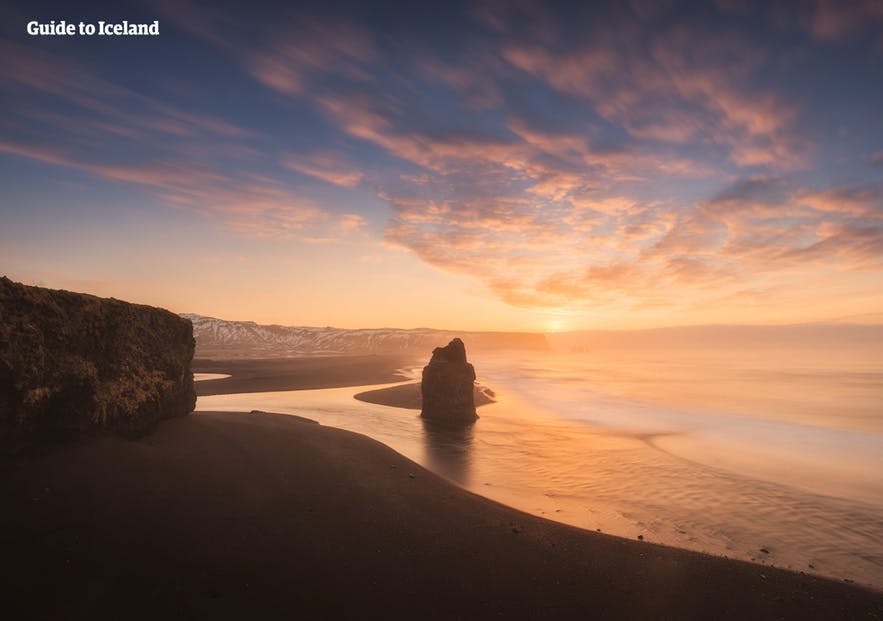 Visitors to Reynisfjara must be made well aware of the potential dangers present at the beach. First of all, the roaring waves of Reynisfjara are particularly dangerous, often pushing further up the beach than many would expect.

These are called sneaker waves, and they can appear when least expected, even on incredibly still days. There are no significant landmasses in between Antarctica and the shores of Reynisfjara, meaning waves have thousands of kilometers to build.

Visitors are advised to never turn their back on the waves, and keep a safe distance of at least 30 meters (100 feet).

Aside from these sudden and dramatic shifts in the tide, the rip currents offshore are infamous for their strength and ability to drag helpless people out into the freezing cold open ocean. Fatal accidents do occur at Reynisfjara, the last of which occurred in November 2022.

But if you remain at a safe distance then be sure that a visit to Reynisfjara beach will be one of the highlights of your visit to Iceland.