Faxi is a wide, serene waterfall in South Iceland. It can be found in the Tungufljót River.

Faxi and the Golden Circle

Faxi falls is approximately twelve kilometres (seven miles) away from Gullfoss and Geysir, two incredibly popular attractions on the Golden Circle. It is thus easy to detour from these for one extra attraction, and extend a day out.

Gullfoss, otherwise known as the Golden Waterfall, is 32 metres (105 feet) tall, falling in two tiers into a beautiful canyon. It is fed by the Hvíta River, which is one of the most popular rivers for rafting in the country, accessible for novices.

Though more powerful and dramatic than Faxi, it has less of its serenity, and there are usually much bigger crowds at Gullfoss.

Geysir, meanwhile, is a geothermal area that, as its name suggests, is home to geysers. The most active of these, Strokkur, erupts to heights of up to forty metres (131 feet) every ten minutes or so.

Geysir itself has been inactive for the past few years, only going off sporadically. The area is also home to many fumaroles, hot-springs and mud-pits.

The final site of the Golden Circle, Þingvellir National Park, is a little further away, but still well worth the visit. This location sits directly between the North American and Eurasian tectonic plates, in the Mid-Atlantic Rift, and is an oasis of beautiful lava landscapes, forest and crystal clear streams.

This location is also a historical centre, being home to the original site of the world’s longest-running parliament. Icelanders formed it here in 930 AD, before much of the rest of Europe had even starting thinking about representative democracies.

The Golden Circle is as close to an essential-Icelandic experience there is, and Faxi is a perfect addition to extend the day. 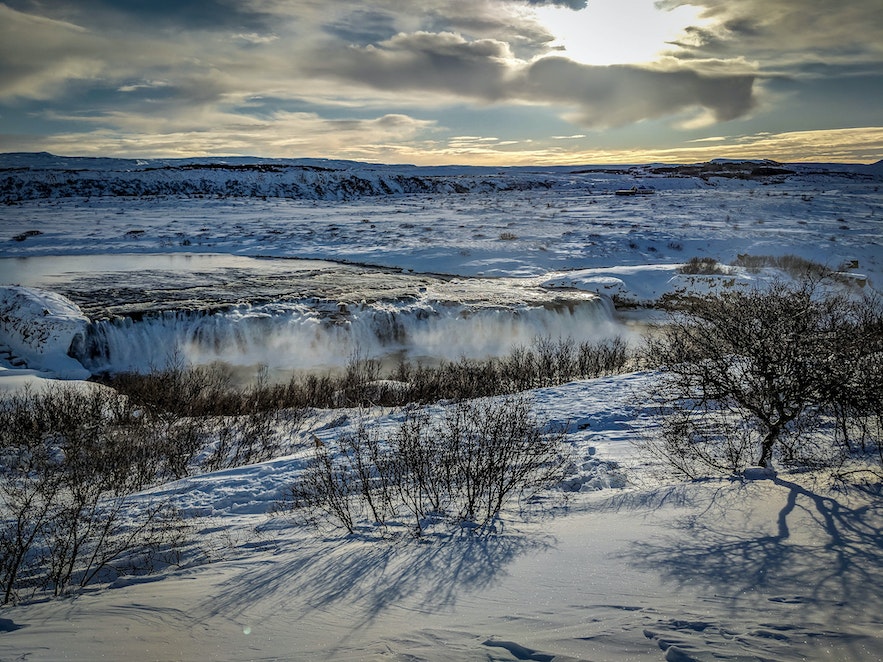 Hiking through the countryside around Faxi waterfall is a pleasure. Many Icelandic horses and a wealth of birdlife can be expected in summer. The area also draws those who enjoy salmon fishing, and the falls is pregnant with them.

Although it is not particularly rapid, kayaking and rafting are banned here. As mentioned, Hvíta is the rafting river of the area.

A restaurant stands on site, where guests can enjoy lunch with a beautiful view.

Other detours from the Golden Circle

The Golden Circle only takes approximately half a day to traverse if travelling from Reykjavík. There are thus many sites, alongside Faxi, that visitors could add to their sightseeing journey if travelling alone.

Those seeking relaxation and rejuvenation could enjoy the Fontana Spa at Laugarvatn, or else the secret lagoon at  Flúðir. Those interest in culture could see the eco village Sólheimar, the historical settlement of Skálholt or else the greenhouses and horses at Friðheimar.

There are also many activities to be had in the area, such as snorkelling in Silfra, snowmobiling on Langjökull, or river-rafting (in summer).

A comprehensive list of detours can be found on this site.