Gljúfrabúi (or Canyon Dweller) is a beautiful waterfall located at Hamragarðar in South Iceland, close to its better known counterpart, Seljalandsfoss waterfall. It is one of the hidden gems of the South Coast, and thus a great spot for photographers and those seeking to admire nature in peace.

The 40 metre (131 feet) high Gljúfrabúi is hidden behind a huge cliff which faces out towards Iceland’s South Coast and the Atlantic Ocean. Because of its decent ‘hiding place’, it is overlooked by most travellers, in spite of the fact that thousands of people visit Seljalandsfoss, less than a kilometre away, every day.

After a few metres of travelling through a narrow valley, the space will open, and here, Gljúfrabúi tumbles before a great boulder, which it is possible to climb upon for some great photos. With the open sky above, mossy walls, silver mist and black lava, it is one of Iceland’s most breathtaking gems, seemingly from a fantasy story.

It is also possible to see Gljúfrabúi from above. There is a steep path that allows you to clamber up the cliff, at some points with the aid of ropes.

Both these routes are mildly challenging and have their dangers, so only attempt to reach Gljúfrabúi if you are in a decent state of health and confident on your feet. They should only be attempted when there is not ice on the ground, and in the case of the path up the cliff, when it is wet and slippery. 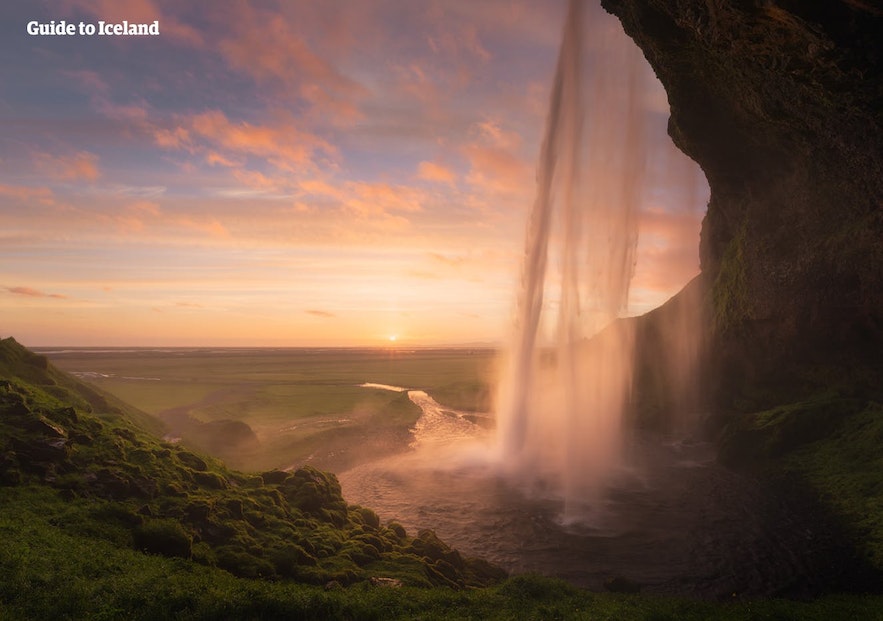 As mentioned, Gljúfrabúi is about ten minutes walk north Seljalandsfoss. Interestingly, this is one of the country’s most famous and photographed waterfalls, due to the fact it falls from a concave cliff which allows visitors to fully encircle the cascade.

Seljalandsfoss is taller than Gljúfrabúi at 60 metres (196 metres), with a similar waterflow. Both are fed by the meltwater of the glacier Eyjafjallajökull, the volcano beneath which caused widespread problems to air traffic across Europe when it erupted in 2010.

A much more powerful waterfall can be found just half hour’s drive or so along the Ring Road, called Skógafoss. This is a similar height to Seljalandsfoss, but up to 30 metres (98 feet) wide after a heavy rain.

Those who travelling a little further along the South Coast will reach the cliffs of Dyrhólaey, with their beautiful rock arch and resident puffins in summer, and the beach of Reynisfjara, renowned for it powerful waves and basalt sea-stacks, called Reynisdrangar.