Austurstraeti is a small yet charming pedestrian street in Iceland located in the downtown area of Reykjavik.

Locals and tourists visiting the Icelandic capital can visit Austurstraeti street by joining guided tours, such as this two-hour guided Reykjavik walking tour and this three-hour private tour of Reykjavik with a local expert. Those who want to explore on their own can also see the pedestrian street by purchasing a Reykjavik city card that provides free entry to public transport.

Although less popular than its neighboring streets, Laugavegur and Skolavordustigur, Austurstraeti remains an excellent place to get your first taste of Reykjavik with its top-rated shops and lively neighborhood.

Photo from Wikimedia, Creative Commons, by Johann Heidar Arnason. No edits made.

The street of Austurstraeti, Austurstræti in Icelandic, is located in the city center of Iceland’s capital, Reykjavik. To its east is the historic Laekjargata, where a stream used to flow toward the sea. Meanwhile, to its other side is the street of Veltusund.

Before the street was formally named Austurstraeti, locals called it Langastett or Langafortov, which translates to “long pavement.” Its former names originate from the paved appearance of the area built with cobblestones, while its new name translates to “East Street” in English.

In 2007, Austurstraeti was put into the national spotlight when a fire engulfed the street, destroying two historic houses. Fortunately, no injuries or other extensive damages in the area were reported.

Today, locals and travelers flock to the scene because of its pedestrian-friendly pavements dotted by shops, cafes, and bars.

What to Do in Austurstraeti Street in Iceland

With its central location in the capital of Iceland, Austurstraeti street is ideal for city walking, shopping, food tasting, and even bar hopping.

At the western end of Austurstraeti, you can find one of Iceland’s busiest plazas, Ingolfur Square or Ingolfstorg. The public square in downtown Reykjavik is a favorite among locals because of its incredible selection of cafes and restaurants offering different cuisines.

In addition, Ingolfur Square in Austurstraeti is famous because it hosts some of the most exciting activities in the city. During festivities, particularly in winter, the attraction becomes a marketplace for Christmas events where Icelanders and tourists gather and celebrate together.

If you are also visiting the area in December, a portion of the public square transforms into an ice skating rink. Although the rink has no admission fee, you need to rent helmets and skates on-site. Nevertheless, ice skating while in the comfort of the city center is already a great reason to visit the place. 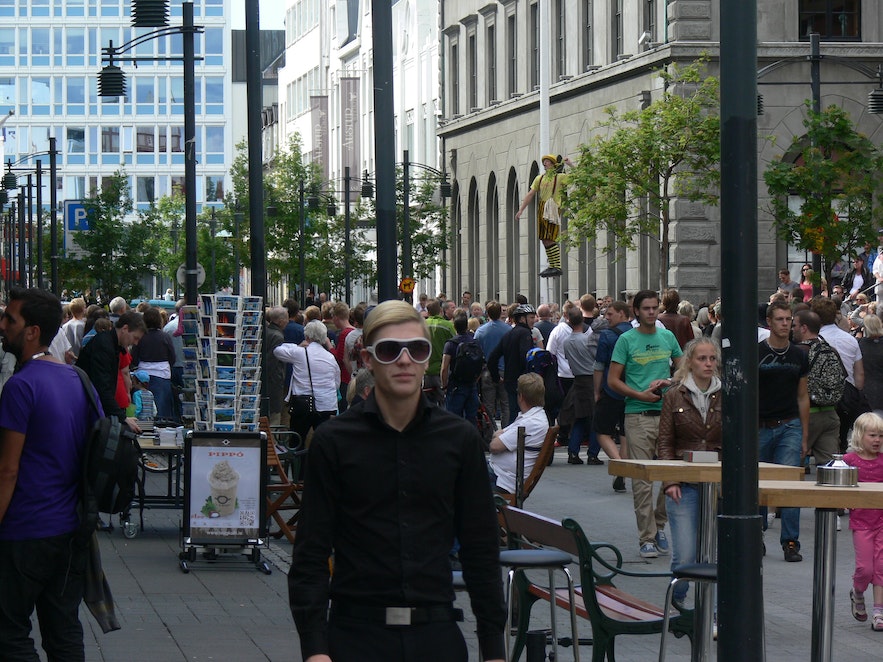 Photo from Wikimedia, Creative Commons, by Christian Bickel fingalo. No edits made.

Nightowls and those who enjoy spending the night bar hopping will find Austurstraeti a top location to visit in Iceland. Different bars and cafes that remain open even after midnight line up the whole strip of Austurstraeti.

Nightlife in Reykjavik is generally fun as Iceland is one of the safest countries in the world with low crime rates. You can party and drink all night long in moderation without worrying much about safety, as Reykjavik is also an inclusive city.

Most happy hour activities happen in the Laugavegur main street, but you also have great choices in Austurstraeti. Some bars and party places you can visit in Austurstraeti include The English Pub, Lux Nightclub, The Drunk Rabbit Irish Pub, and Jungle Cocktail Bar.

These clubs offer alcoholic and non-alcoholic drinks, from beers to cocktails and local brews. You can taste these beverages and stay in some of the bars by joining this three-hour Reykjavik bar tour with complimentary drinks.

To visit these establishments from afternoon to midnight, you must be at least 20 years old, as it’s the legal age to drink alcohol in Iceland. If luck is on your side during your trip, you might even see a live show in these bars, such as a drag event, comedy night, or band performance.

Austurstraeti street is just one of the many places of interest to explore in Reykjavik. The city is brimming with cultural and natural attractions unique to the land of fire and ice.

To learn more about the rich culture and history of Iceland, take advantage of your proximity to some iconic landmarks and museums.

Reykjavik Art Museum, Settlement Exhibition, and the Reykjavik Maritime Museum are less than a mile away from Austurstraeti street. These national exhibitions and galleries offer interactive and educational displays that will thrill adults and children. To visit these sites, you can purchase this 48-hour Reykjavik city card with admission to museums and galleries.

Not far from these locations are Hallgrimskirkja church and Harpa Concert Hall. These landmarks are the perfect introduction to the magnificent architectural scene in Iceland. Standing at 245 feet (75 meters), Hallgrimskirkja is the tallest church in Iceland, with an exterior inspired by the basalt columns of Svartifoss waterfall.

Meanwhile, if you plan on staying in Reykjavik longer to visit more attractions, you have many accommodation options in the city. For example, City Center Hotel and Apotek Hotel Reykjavik by Keahotels are just within the area’s perimeter.