The Leirhnjukur volcano, or Leirhnjúkur in Icelandic, is an active crater near Lake Myvatn and one of Northeast Iceland's impressive natural wonders.

Various tours are available to see this spectacular area in Iceland's Diamond Circle. Pass near the volcano on the 8-hour snowshoe tour of Lake Myvatn, or plan your self-drive tour from Reykjavik. Those who choose to rent a car during their trip to Iceland can include the Leirhnjukur volcano in their itinerary.

Located close to Lake Myvatn, this active volcano is part of the Krafla volcano system. Krafla is a volcanic caldera made up of crater lakes and Icelandic volcanoes.

Photo from Pixabay, by LalouBLue No edits made

Leirhnjukur is an active volcano and one of the most impressive in the Krafla caldera. Although the last eruption occurred in 1984, the area is still monitored closely for any signs of activity.

Arriving at the Leirhnjukur volcano will make you feel like you've stepped onto another planet. The craterous landscape is reminiscent of pictures of Mars, and the smoke and steam from the ground lend a mystical atmosphere to the area.

The hill of the volcano rises about 50 feet from the lava field and is nicknamed "clay hill" because the geothermal heat creates a porous ground that produces gray clay.

When you visit this area, you will see that the hot springs in and around this crater have stunning aquamarine water that contrasts dramatically with the greys and reddish-browns of the surrounding lava fields.

The Leirhnjukur volcano is in the Krafla caldera. The caldera is in the northeast of Iceland, about 9.3 miles (15 kilometers) north of the small village of Reykjahlid. It's about 6.2 miles (10 kilometers) in diameter, with a 55-mile (90-kilometer) fissure zone.

Reykjahlid is a village on the shores of Lake Myvatn. It is a tiny settlement with a few amenities, such as little shops, restaurants, and a gas station, as it caters to tourists looking to explore the area.

The volcano is a quick drive around the river from the village. Most tourists visiting the area stay in Reykjahlid and make day trips around the lake to explore the various geothermal areas.

Reykjahlid is 292 miles (470 kilometers) from Iceland's capital city, Reykjavik. Although there are a few buses in between, renting a car may be your best option to get to Reykjahlid. 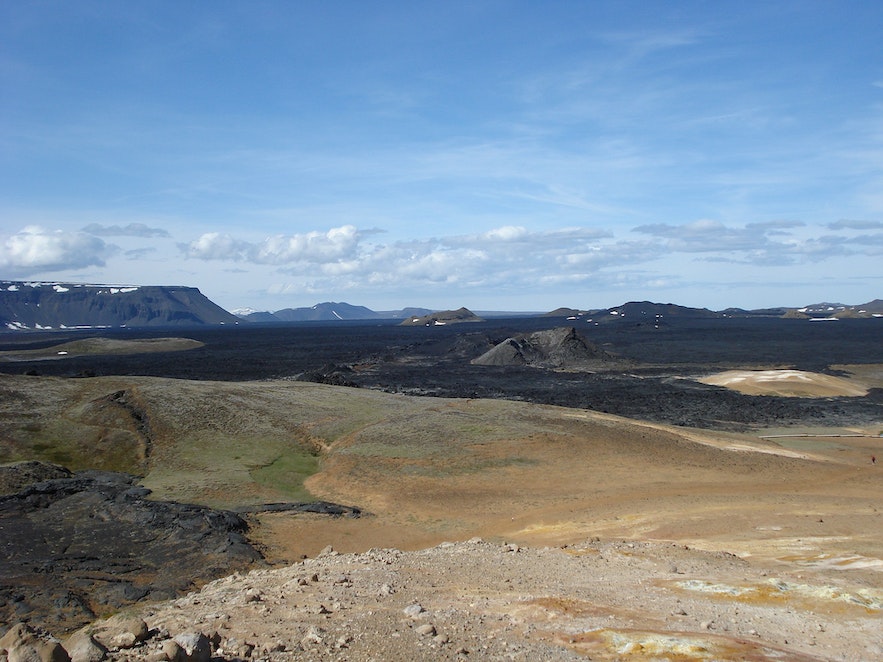 Photo from Wikimedia, Creative Commons by TommyBee No edits made

History of the Leirhnjukur Volcano

The Krafla region is one of the most active volcanic regions in Iceland. Leirhnjukur has not erupted since 1984, but it was active in the years prior.

From December 1975 until September 1984, there were 17 volcano-tectonic events when scientists recorded magma's movement underneath the earth. These events were followed by significant expulsion of lava starting in 1980, evidence of which you can still see today.

Other legendary eruptions have occurred over the centuries, such as the 1725-1729 Myvatn fires.

The easiest way to get to the Leirhnjukur volcano is by renting a car and driving around Lake Myvatn.

You can't rent a car from the village of Reykjahlid, so renting one from Reykjavik before arriving at Reykjahlid is the best option. Take the Ring Road east from Reykjahlid and then a left turn to head north to Leirhnjukur.

When you arrive at the Leirhnjukur car park, allow 1-1.5 hours to explore along the 2.4-mile (3.9-kilometer) hiking trail to appreciate hot springs, craters, and otherworldly scenery. The easy-level trek starts with an out-and-back track and then turns into a loop before heading back to the car park.

More adventurous travelers can hike from the village to Leirhnjukur's peak. The round-trip takes about three or four hours and has some moderate inclines. The trail is suitable for most intermediate-level hikers and features gorgeous lake views.

Things to do Nearby

One of the best things about the Leirhnjukur volcano is its proximity to many other natural wonders. The Myvatn Nature Baths are less known than the famous Blue Lagoon but rival it for scenery and relaxation. Hverir is a highly geothermal area along the lake that will make you feel like you're walking on the moon.

If you're keen to explore more volcanic landscapes, Dimmuborgir is a collection of lava fields and rock formations with various hiking trails. Last but not least, Grjotagja is a smaller but stunning lava cave that served as a Game of Thrones filming location.