Mývatn is a beautiful lake with many small islands in the north of Iceland, the fourth largest lake in the country. Due to its serenity, birdlife and volcanism, the lake, including its surrounding area, is one of the most amazing natural attractions in the country.

Explore this region on a tour of Myvatn or a self drive package vacation.

Mývatn is, in fact, so beautiful that is was used as a site in the Game of Thrones franchise. In mid-winter it was used to represent the lands North of the Wall, namely Mance Raider’s Wildling camp.

Mývatn sits about an incredibly active geothermal area, giving it a unique and beautiful geology. After all, it is close to sites such as Krafla caldera, which contains the notorious Víti volcano, the name of which translates to ‘hell’. 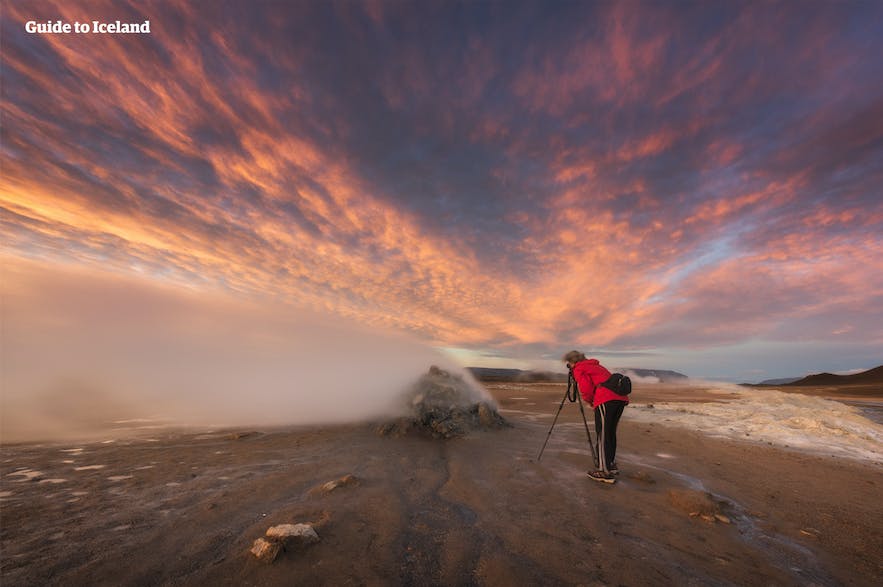 In fact, Mývatn has more species of duck than anywhere else in the world, with thirteen nesting species and many more visitors. Most popular (and common) amongst these is the harlequin duck sometimes referred to as the white-eyed diver after their unique white markings.

Mývatn’s surrounding vegetation and plentiful food make it a happy home for voles, mice and rats that have spread all over Iceland, providing tasty treats for Iceland’s only native land mammal, the Arctic Fox. Visitors, however, will have to keep a close eye out for these, as they are experts in camouflage.

In terms of flora, the most interesting plant life at Mývatn actually exists just beneath the surface of the water. Marimo are ‘moss balls’, bizarre spheres of fluffy green algae that are found in very few other places around the world, namely Japan (where they got their name), Scotland, Estonia and Australia.

Visitors to Mývatn often wish to spend more than just a single day exploring its many surrounding locations. Primary amongst these is Dimmuborgir, a lava field which truly reflects the dramatic consequences of a volcanism in Iceland. This area is steeped in folklore and is home to the thirteen ‘Santas’ of Iceland, the Yule Lads.

It was also here that many of the Game of Thrones scenes were shot such as Mance Rayder's wildling camp at Dimmuborgir and Grjótagjá cave, where Jon and Ygritte shared an evening together. Though this site can be admired from the shore, the water temperature is not monitored and can heat up very quickly, so visitors are asked not to take a dip.

Those with an interest in Iceland’s strange geothermal and geological sites should also check out the Skútustadagígar pseudo-craters and the aforementioned Víti crater and its surrounding lava field. There are also several geothermal hot spots around Krafla and the Námaskarð Pass which is a fascinating and primordial place.

Lake Mývatn is located on the Ring Road that fully encircles the country, making further sites easily reachable. To the west is the ‘Capital of the North’, Akureyri, a charming town with the highest population outside of the capital area.

To the east, you can find the largest waterfall in Iceland, Dettifoss which also happens to be the most powerful waterfall in Europe, and the incredible horseshoe-shaped canyon, Ásbyrgi. This feature was said to have formed by the stomping of one of the feet of Oðinn’s eight-legged horse as it leapt through the sky.