What is the Diamond Circle sightseeing trail? Which natural attractions are included en route, and what tours are available for those adventure-hungry visitors looking to experience it all? Read on to find out all you need to know about Iceland’s Diamond Circle.

Only a quick look over the Guide to Iceland site is enough to know that this Land of Ice and Fire offers plenty of incredible things to see and do... so much in fact that it can often be difficult figuring out exactly how to spend your days here. If, however, you have the opportunity to visit each of Iceland's stunning regions, the northeast is sure to be one of the most memorable.

"Why?", you ask. Simply put, because of the Diamond Circle, one of Iceland's most popular sightseeing routes.

What Is The Diamond Circle?

The Diamond Circle would never have been considered the treasure it is today without the omnipresent and active processes of Mother Nature herself; immense geological movement, crushing pressure, burning heat—all of this becomes immediately clear in the wake of bubbling hot springs, volcanic lake beds and dried lava fortresses.

Visitors to Iceland may not all be aware of the Diamond Circle, a 260-kilometre (160mi) route that is widely considered to be the northeastern alternative to the famous Golden Circle sightseeing route.

Of course, given the distance one must travel from the capital, the attractions on the Diamond Circle do garner less attention, something of a crime-against-nature considering their sheer drama, beauty and unique character.

So just what are these unmissable attractions? Well, the Diamond Circle is comprised of four major sites; Lake Mývatn, Dettifoss Waterfall, Ásbyrgi Canyon and the fishing town of Húsavík. 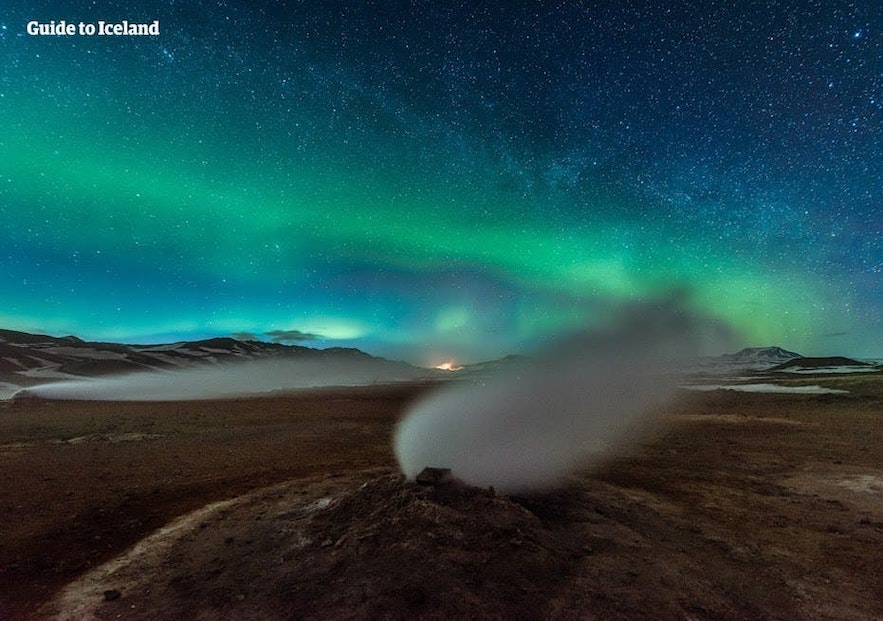 However, just like the Golden Circle, there are a number of notable other locations en route that demand a visit, of which we will refer back to later. First, let’s look to the superstars that have put the Diamond Circle firmly on the map. 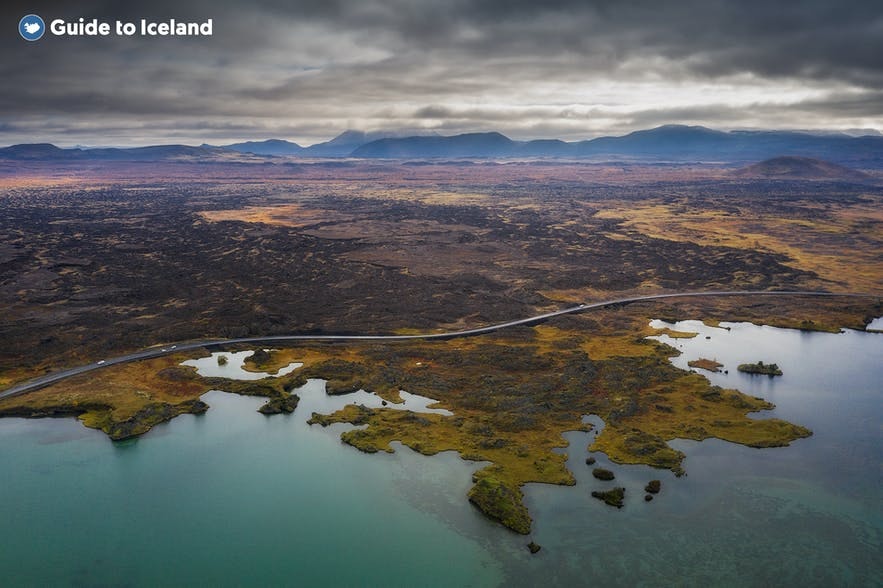 Covering a total area of 37 km² (14 sq mi), the glittering Lake Mývatn is one of the Diamond Circle’s most beloved attractions, with its lush surrounding wetlands, an abundance of birdlife and the dark lava pillars that characterise the nearby landscape.

Its name can be translated to “the Lake of Midges”, due to the fact that the summer months see enormous clouds of these tiny insects descend on the area, forcing some visitors to wear face nets. This body of water is thought to have been formed through volcanic eruptions approximately 2300 years ago. 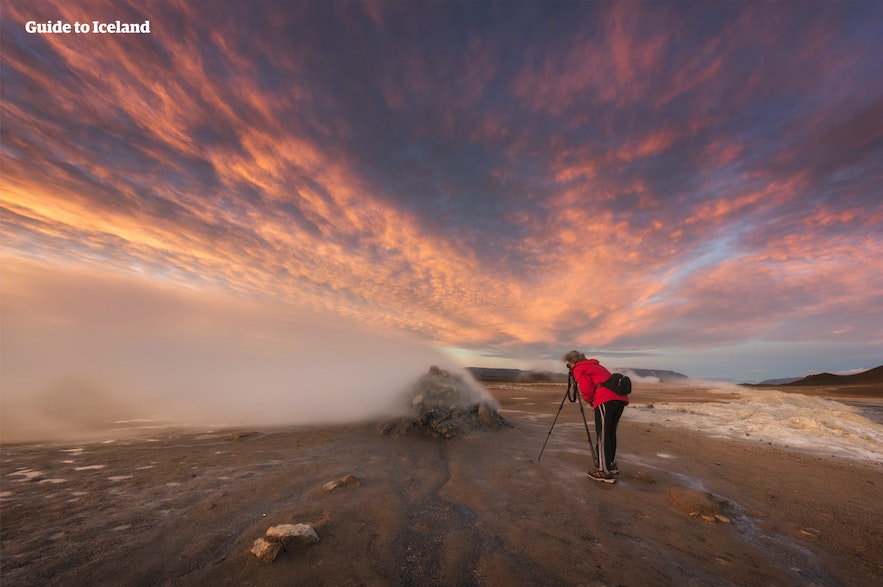 While the lake is stunning enough, the area does encompass a number of other important sites, including the mighty Mt. Námafjall and, at its base, Námaskarð Pass.

Námaskarð, a geothermal valley, is widely compared to the landscape of Planet Mars thanks to its vermillion colour sands and rocky craters, an otherworldly vista made all the more impressive with billowing pillars of steam and gurgling mud cauldrons. Wooden walkways make it simple to get a close-up look of this bubbling, hissing energy in action. 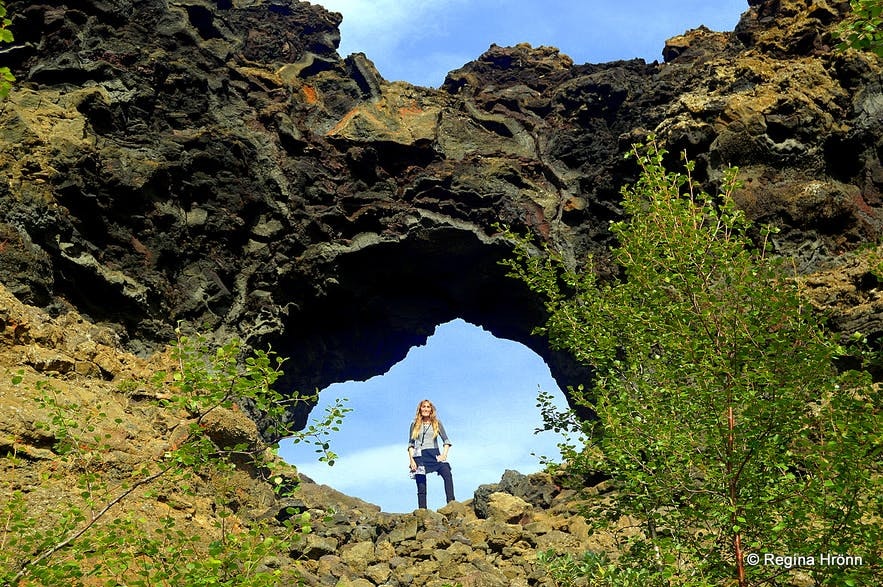 Dimmuborgir, otherwise known as ‘The Dark Fortress’ is another fantastical site close to Lake Mývatn. Its characteristic dark pillars and gnarled rock formations are a result of the 2300-year-old historic eruptions, where the lava flow poured across the water body, thus quickening the cooling process.

Dimmuborgir is now a popular filming location. Viewers of HBO’s fantasy show Game of Thrones might recognise it from Season 3 as the location of Mance Rayder's wildling camp.

However, Icelanders recognise the location more from folklore. Legend dictates that Dimmuborgir is home to the half-troll, half-ogre Grýla and her yielding, malleable husband, Leppalúði, the parents of Iceland’s thirteen Christmas Yule Lads.

During the season, these mischievous trolls come out one by one each night to terrorise or reward the local children in various ways.

Grýla and Leppalúði also own a gigantic cat that shares its owners' appetite for children—without a doubt, an Icelandic Christmas can be somewhat more worrying, violent and crime-filled than the same holiday held elsewhere. 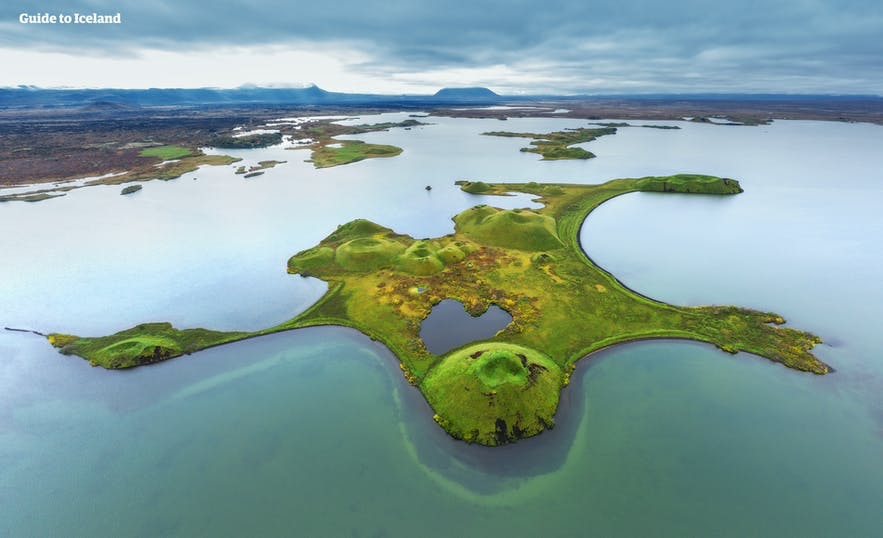 On the southern shores of Lake Mývatn, visitors will come across the geological marvels that are Skútustaðagígar Pseudocraters, a part of the Krafla volcanic network. Formed thousands of years ago after subterranean gas explosions, the craters are today surrounded by Mývatn’s wetlands, a popular area for birdwatchers. 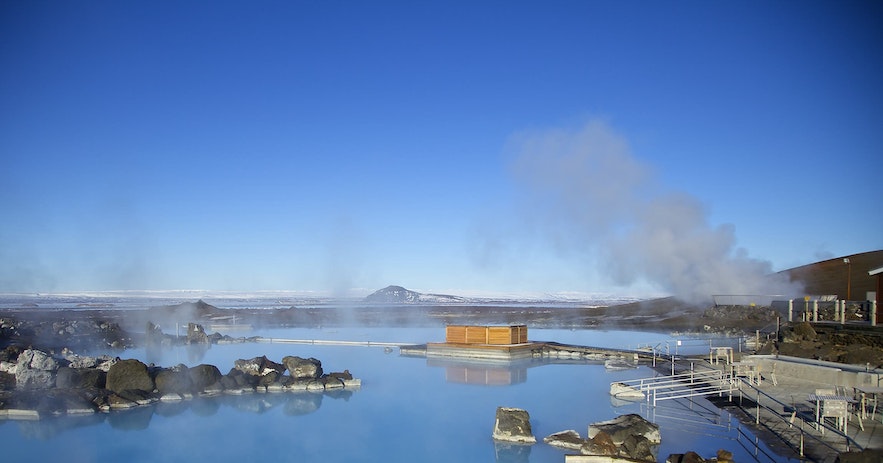 To finish off your time exploring the lake in the most luxurious manner possible, why not visit Mývatn Nature Baths? This gorgeous spa is considered to be a cheaper, quieter and more laid-back alternative to the more famous Blue Lagoon Spa, found on the Reykjanes Peninsula.

The Mývatn Nature Baths first opened in 2004, and people quickly realised that it was one of the best spots in the north-east to relax, be it under the Midnight Sun in summer or the Northern Lights in winter. 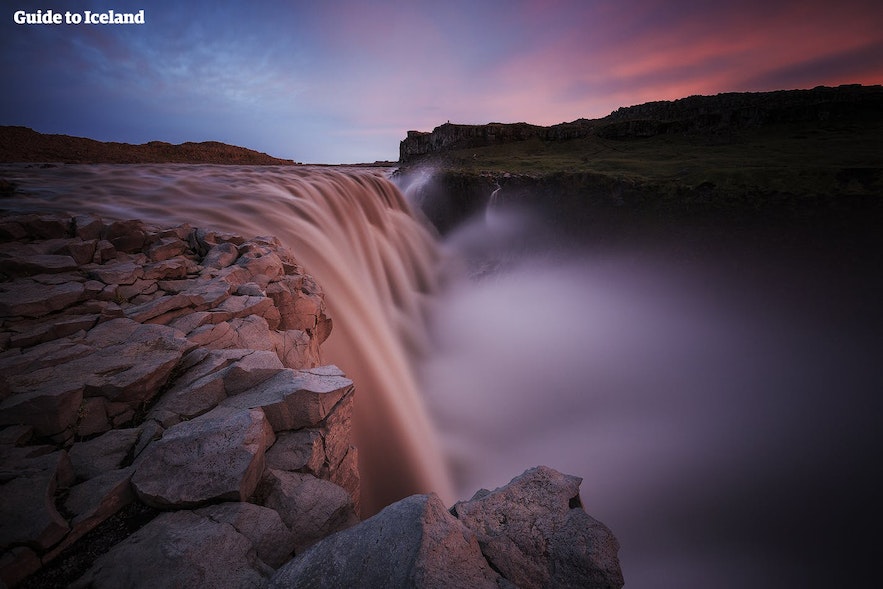 The waterfall is 100 metres in width and cascades 45 metres (150 ft) into the stunning Jökulsárgljúfur canyon, creating a plume of mist so great that, on clear days, is visible from several miles away.

Jökulsárgljúfur canyon (translated to “Glacial-River-Canyon”) is 25 metres in length (80 ft) and was once considered a national park in its own right, though today it makes up the northernmost section of the Vatnajökull National Park.

The canyon boasts a number of other falls, including Selfoss, Hafragilsfoss and Réttarfoss, and has often been colloquially termed as the Grand Canyon of Iceland.

Dettifoss served as a backdrop for Ridley Scott’s science fiction epic, ‘Prometheus’ (2012), easily fitting into the otherworldly, cinematic setting with its frothing white mist and dark, domineering canyon walls. The waterfall also inspired a musical symphony (Op. 57) of the same name by the composer, Jón Leifs. 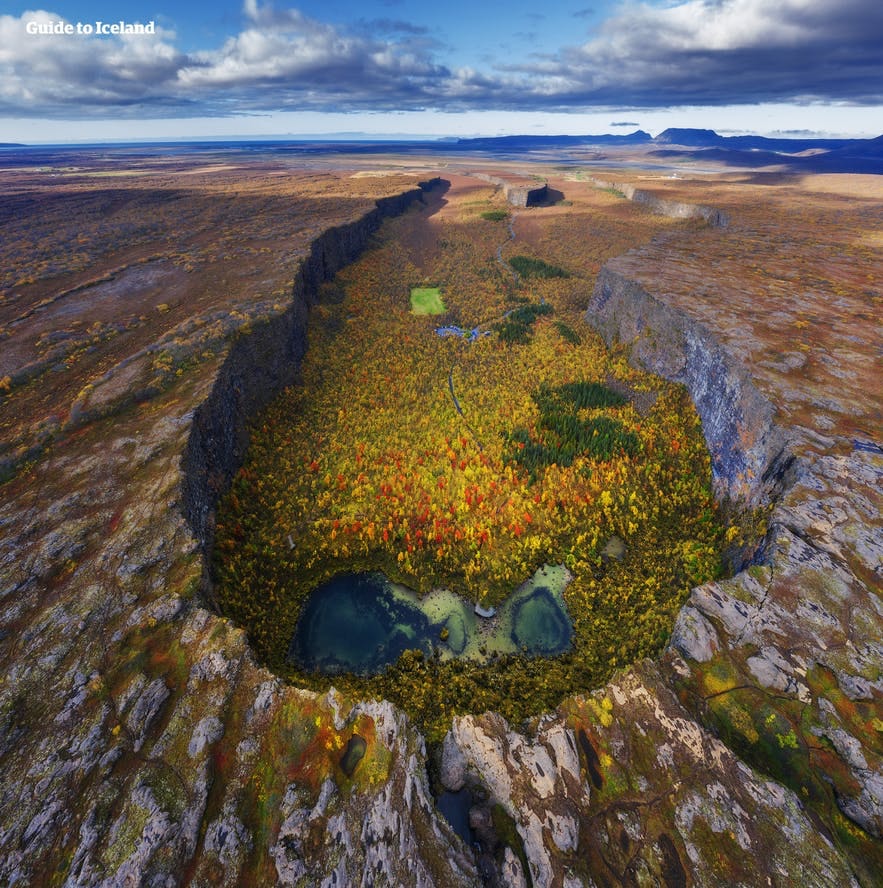 Ásbyrgi is a horse-shoe shaped canyon on the edge of Vatnajökull National Park, approximately 80 kilometres (50 mi) east of Húsavík—around a forty-five minutes drive. 3.5 kilometres (2.2 miles) in length and with a width of 1.1 kilometres (0.7 miles), Ásbyrgi also boasts enormous cliff faces reaching up to 100 metres in height, with birch and willow woodland sitting within its base.

Aside from this, visitors will also see the distinguished feature Eyjan ("The Island"), a 25m  (80 ft) rock stack that acts as a dividing line for near half of Ásbyrgi’s length. For all of these reasons and more, Ásbyrgi is quite unlike any other location found in Iceland.

Ásbyrgi’s shape has led to an important place in Icelandic folklore. According to the myth, the canyon was formed after Odin’s eight-legged horse Sleipnir briefly touched one of his hoofs onto the earth. Perhaps for this reason alone, folk scholars consider Ásbyrgi to be the capital city of the country’s hidden folk, or Huldufólk, a race of elves that appears frequently in Icelandic and Faroese folklore.

The Town of Husavik

The fishing town of Húsavík may be small, but it has a big reputation as Europe’s capital for whale watching tours, in large part due to the fortuitous feeding conditions of Skjálfandi bay. 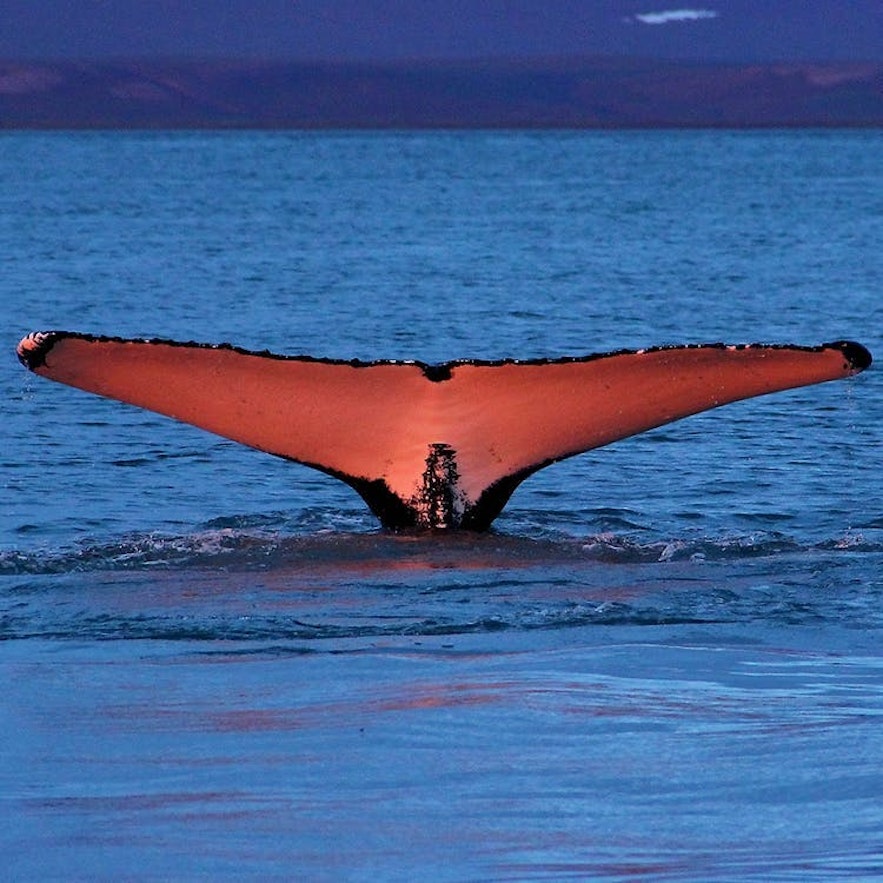 This draws many of Iceland’s twenty species of cetacean close to the mainland, including Minke Whales, Humpbacks and Harbour Porpoises, though there is always the chance to see rarer creatures such as Orcas and the incredible Blue Whale. Whale watching tours began off Skjálfandi bay in the mid-1990s after a build-up of requests from tourists travelling through Húsavík.

Húsavík is home to approximately 2200 people and has much more to offer guests than Iceland’s gentle giants. The most recognisable landmark is Húsavíkurkirkja, a wooden church built in 1907, and the town is considered to be the first location in Iceland settled by a Norseman—Garðar Svavarsson, a Norwegian Viking who stayed for one winter in 870 AD. 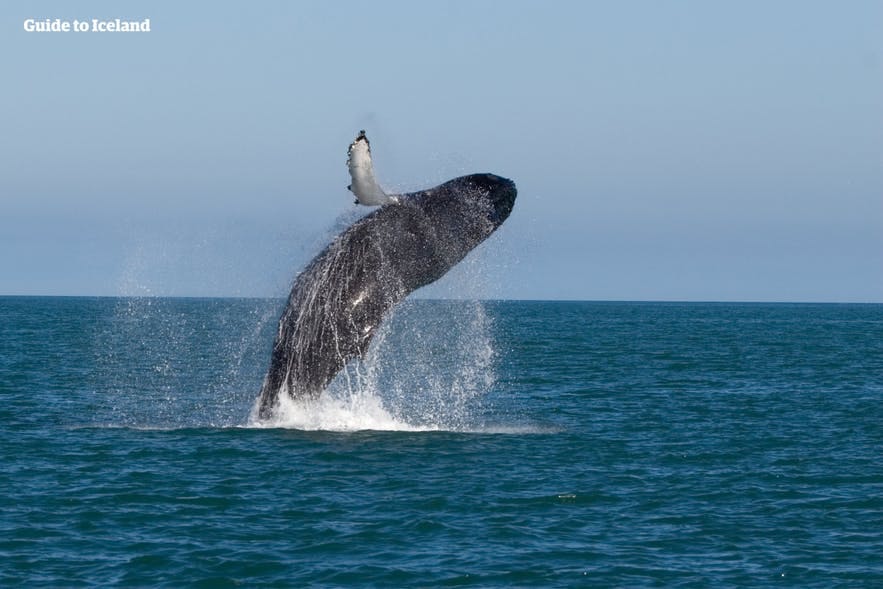 Visitors will also have a chance to check out The Exploration Museum, an institute dedicated to the history of man’s conquests and adventure, as well as see a prized monument dedicated to the Apollo astronauts who trained in the lava fields near Húsavík before their lunar mission.

If you are here primarily for the wildlife, however, you can learn even more at the Húsavík Whale Museum, an organisation that not only delves into the ecology and history of such creatures—particularly their often contentious relationship with humans—but also engages in research programmes such as photo identification and an international volunteer program.

Top Detours on the Diamond Circle

While you will likely be satisfied with the exciting attractions already aforementioned, there are still a few other sites that might continue to spark your interest close to the Diamond Circle route. After all, Iceland is a large landmass, with fascinating sights around every corner. If you have the time, why not check out some of the following features during your journey along the Diamond Circle? 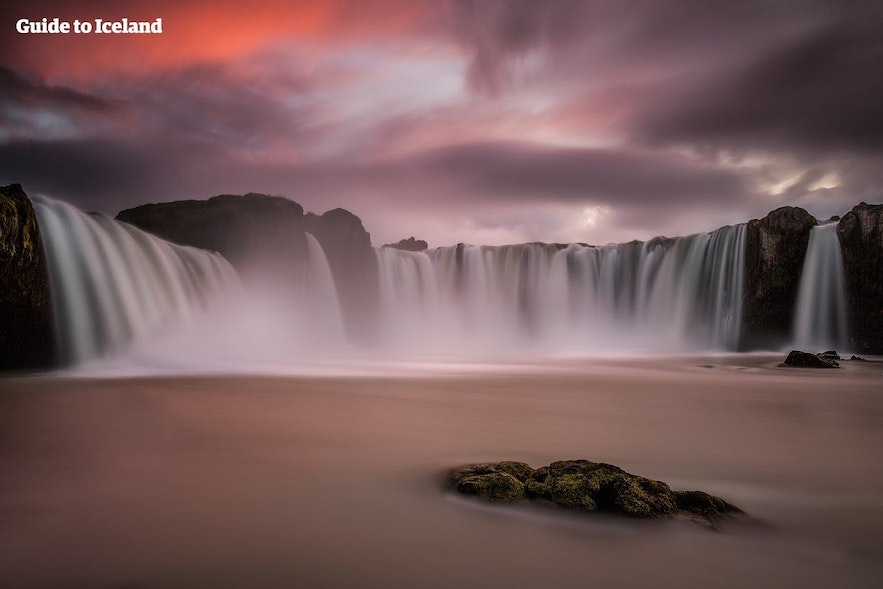 Goðafoss is a waterfall located in the Bárðardalur municipality of Northeast Iceland and is one of the country’s most visited and widely photographed features.

It is known as the “Waterfall of the Gods” due to its place in history; in 1000 AD, upon the Christianisation of Iceland, this scenic spot saw Chieftains (known as “Goðar”) throw their pagan idols into the water as a symbol of their newfound religion.

10 kilometres (6 mi) southwest of Húsavík is the waterfall Æðafossar (“Eider Falls”), located on the Laxá River, one of the country’s most popular rivers for Brown Trout fishing.

The waterfall is split into two parts and overlooks the fantastic black sand shoreline of Skjálfandi bay. Despite this waterfall’s diminutive height and relative seclusion, Æðafossar is a paradise for both aspiring and professional photographers.

Hljóðaklettar is a distinctive cluster of columnar rocks located in Jökulsárgljúfur canyon, just by the entrance of Vesturdalur valley. Angled in a strange and diagonal manner, this captivating feature is closed during the winter months but should be a staple for any summer travellers looking to discover just how unique Iceland’s nature can be.

Given this varied list of sites and attractions, there is truly no reason to skip the Diamond Circle on your visit to Iceland. With the option to partake in a guided tour or even a self-drive trip, visitors can take in this jewel of a sightseeing route and create holiday memories that are sure to last a lifetime.

Have you ever visited the Diamond Circle? Did you prefer the Golden Circle or Diamond Circle tour more? Make sure to leave your comments and queries in the comments box below.