I have shown you the wonderful Westfjords of Iceland in many of my travel-blogs, as I believe that the Westfjords will be a top destination in Iceland soon.

And it seems that Lonely Planet shares my opinion as they chose the Westfjords as the top destination of 2022.

Now I want to show you the two stone men, who don't go unnoticed on Kleifaheiði heath and by Penna river on the south side of the Westfjords region. We can say that they act as the guardians of the roads and bridges, although they were not erected for that purpose.

Top photo: The head of Kleifabúi

While driving on road 62 (Barðastrandarvegur road) in the Westfjords towards Patreksfjörður village, you will notice the landmark of the Kleifaheiði heath. It is a huge stone man, and you might be wondering why it is there and what it represents.

The stone man is called Kleifabú and was erected in 1947 by the road construction workers. It is one of the biggest cairns erected in Iceland if you can call it a cairn as it is more of a statue than a cairn.

Kleifabúi, who is approx. 5 meters tall, stands tall above the highest slope of Kleifar on the west side of Kleifaheiði heath in Vestur-Barðastrandarsýsla.

The men erected Kleifabúi in their spare time after a long day at work - working with stones and rocks while building the roads of the Westfjords with hand tools. And again they erected Kleifabúi with the same material at night, but that type of work must have been more fun for sure than the hard labour during the day.

To me, Kleifabúi represents the playfulness of these road construction workers and I always stop by it and pay my tribute to the large stone man. Kleifabúi has got a stretched-out hand so you can greet him.

Kleifabúi has got a concrete head and the body is made of rocks glued together with cement. Einar Einarsson and Guðjón Jóhannesson erected the cairn (the body) and Kristján Jóhannesson sculpted the head, but the road-construction workers collected the rocks for Kleifabúi's body. 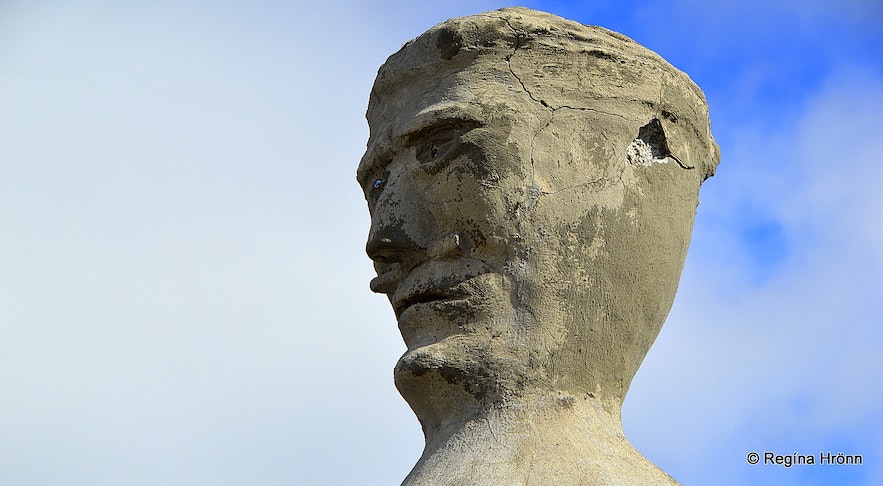 The way it started is that Kristleifur Jónsson, the road works team leader, had erected a pillar of rock straight from the scree. Curious travellers wanted to see the men at work and stopped by the pillar of rock.

A scarf was put around its head and it got nicknamed Kleifagudda, which is a female name (you can see her photo in Morgunblaðið 13.01.1965).

And the road construction workers got the idea of erecting a stone-man since just a plain pillar of rock caught so much attention from passers-by. 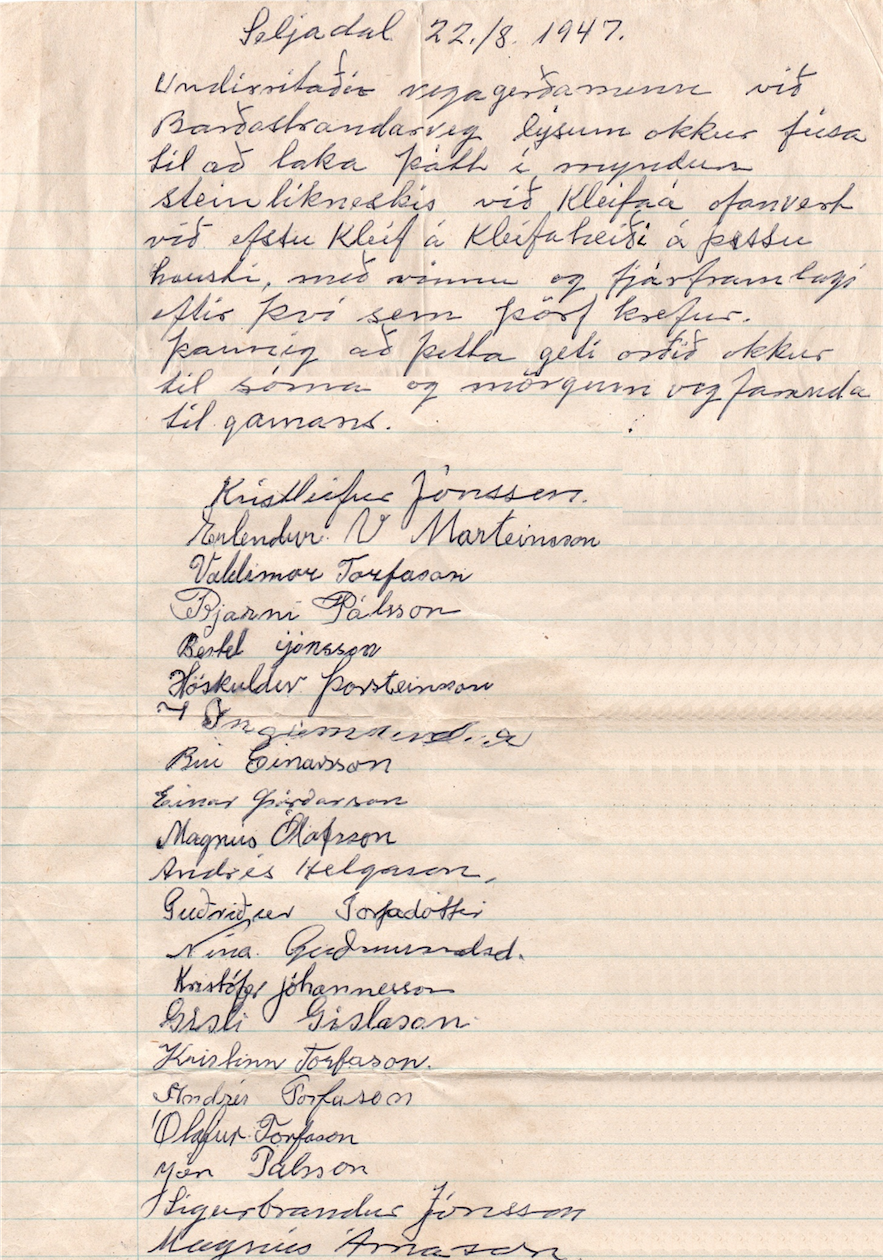 The original contract from 1947, which Björn, Kristleifur's son, was kind enough to send to us

Before they started erecting Kleifabúi Kristleifur made a signed contract with his team, regarding the potential cost of making the cement head, etc. The contract was made on the 22nd of August 1947 and 21 men signed it, including Kristleifur.

Stated in the contract is (translated into English): "We the undersigned road construction workers by Barðastrandarvegur road are willing to take part in the construction of a stone statue by Kleifaá river above the highest slope Kleif on Kleifaheiði heath this fall, with work effort and money as needed. So that it can be of credit to us and enjoyment for passers-by".

My father-in-law, Jakob, phoned Björn, Kristleifur's son, and asked him if he could send us a photo of the original contract, which I could then use for my travel-blog.

Björn was kind enough to agree to send us the photo and gave me permission to post it. Much obliged, Björn :) 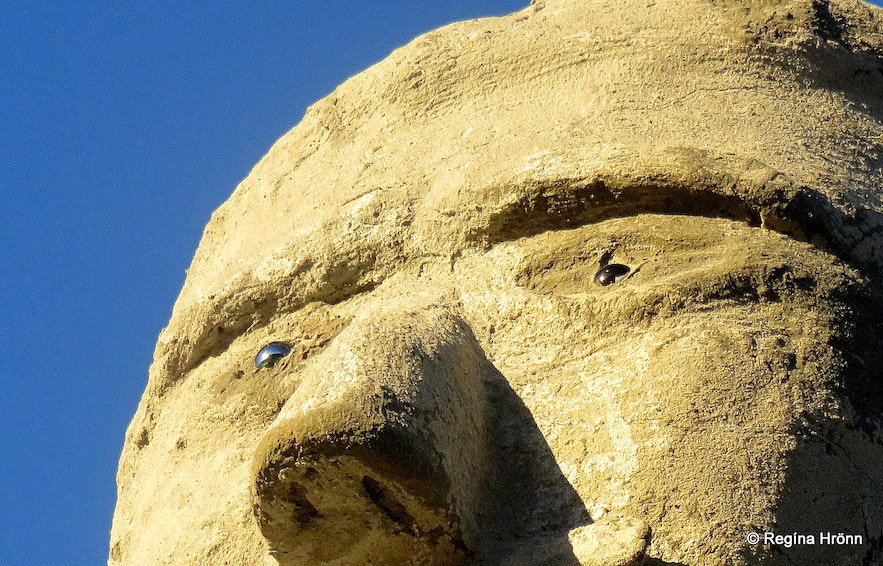 Kleifabúi has got blue eyes :)

Kleifabúi, even though it has got strong facial features, was not created to resemble anybody in particular. So it was not made to mock or honour anybody, just pure folk art and playfulness on behalf of the road constructors.

Kleifabúi was repaired in 1990. And Vegagerðin - the Road Administration of Iceland once gave Kleifabúi a facelift, so to speak, as this 74-year-old stone man has stood tall and proud on the Kleifaheiði heath in all types of Westfjord weather conditions, so he understandably needed a bit of upkeep.

In 2001 during road construction of a new road over Kleifaheiði heath, Kleifabúi was wrapped in plastic to protect it during the explosions.

And as is written in this article on Mbl. then the plastic was supposed to hug Kleifabúi so it wouldn't collapse. In the article, you can see a photo of Kleifabúi wrapped in plastic.

In 2002 at the ceremony for the opening of the new road, the celebration was held by Kleifabúi, who got surrounded by flags, both the Icelandic flag and the flag of Vegagerðin. You can see a photo on page 4 in Framkvæmdafréttir Vegagerðarinnar. 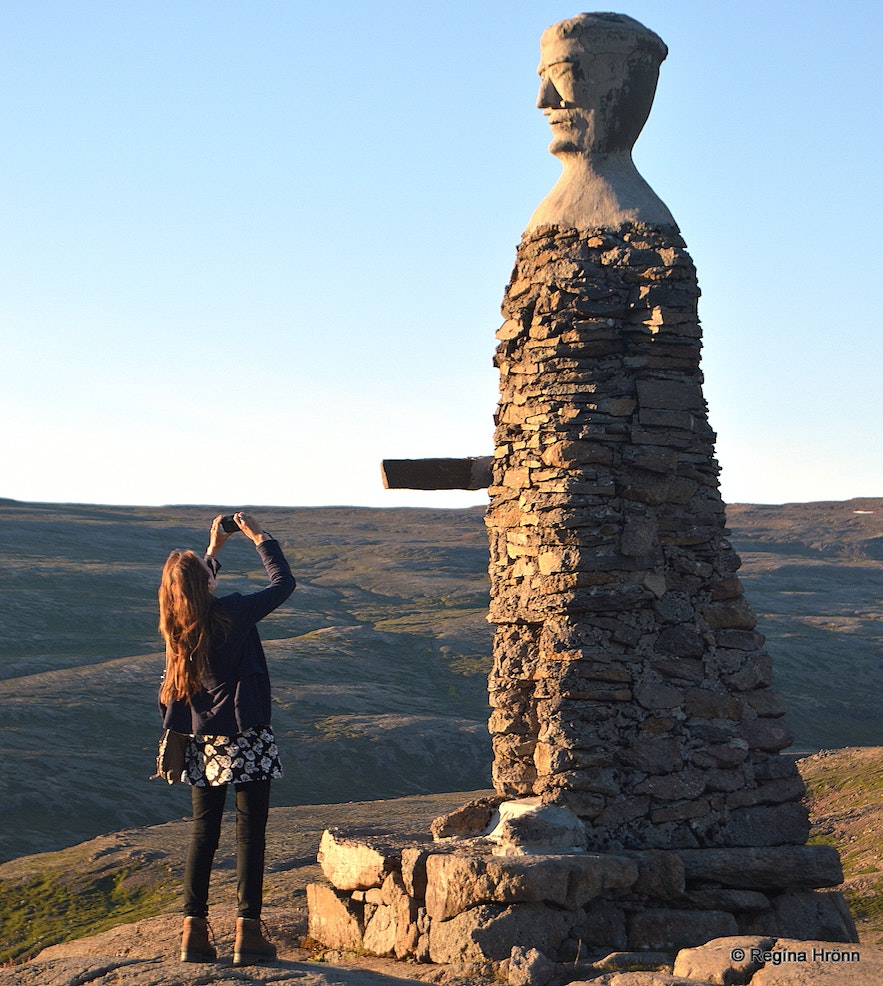 A sign was erected by Kleifabúi so people would know its name, Kleifabúi, which is the name he was given. On the sign is written the second verse of a poem, which Kristleifur composed about Kleifabúi. 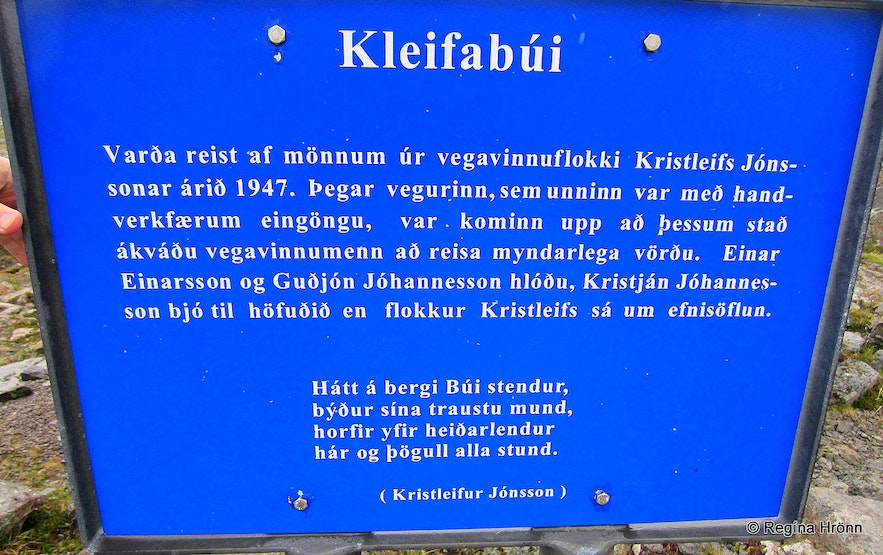 (This lovely poem was composed by Kristleifur Jónsson)

Kleifabúi is the correct name for this stone-man, but it is sometimes called Kleifakarlinn and it has got its own Facebook like-page under the name Kleifakarlinn.

I scrolled down the whole page on Facebook and saw a comment that Kleifabúi was dressed in a sailor suit back in 2011 and wasn't too happy about that ;) I haven't seen a photo of him in a sailor suit though but would like to see one. 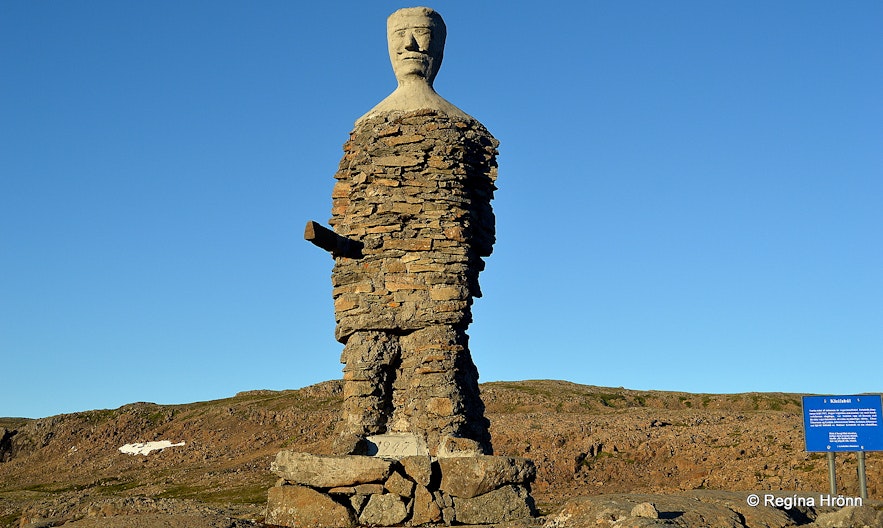 To me, Kleifabúi serves as a monument, a tribute to the brave men who surveyed and built the roads in the Westfjords.

I have already written about the old tradition of erecting stone cairns in Iceland. Kleifabúi is a type of that old tradition, but on the other hand, Kleifabúi doesn't serve a purpose per se like the cairns do, but is folk art. And lovely as such, in my opinion.

Kleifaheiði heath is 12 km long and 410 m at its highest point.

Roads in the Westfjords 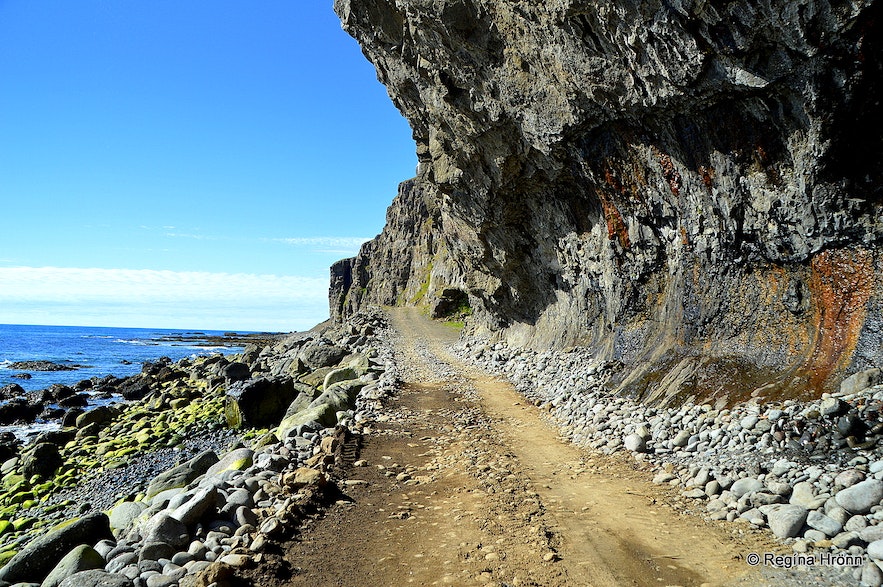 The road by Skútabjörg cliffs

This was no small task back then as the roads were made by hand tools over very difficult rocky terrain. And Kleifaheiði heath was no exception. The men were young and energetic and road construction was a sought-after summer job.

The road leading to Rauðasandur is steep and winding and reaches a height of 350 m. Quite a few people are scared of driving on it. A road was originally built over Mt. Skersfjall to Rauðasandur back in 1933.

Even now in 2021, this road is difficult to drive for the milk-truck driver, who collects milk twice a week from the farmers at Rauðasandur. And sometimes it is impossible to collect the milk from the farmers in the wintertime.

Still, it is not the scariest looking road in the Westfjords. Some of the roads in the Westfjords are high up in the mountains and some of them are steep and winding. So they are not for people who are afraid of heights.

The most dangerous road construction in the Westfjords is Kjaransbraut, when a  road was carved into the steep and craggy cliff by a very courageous local, Elís Kjaran Friðfinnsson (1928-2008), with a small bulldozer, which was often referred to as Teskeiðin - the Teaspoon.

I drove on this road, by Svalvogar and the road by Skútabjörg cliffs on a guided tour and wrote a travel-blog about it if you want to see more photos and some amazing scenery. In this location, I have taken some of my best photos.

On the same day I took the photos of the stone man by Penna - see the next chapter in this travel-blog. 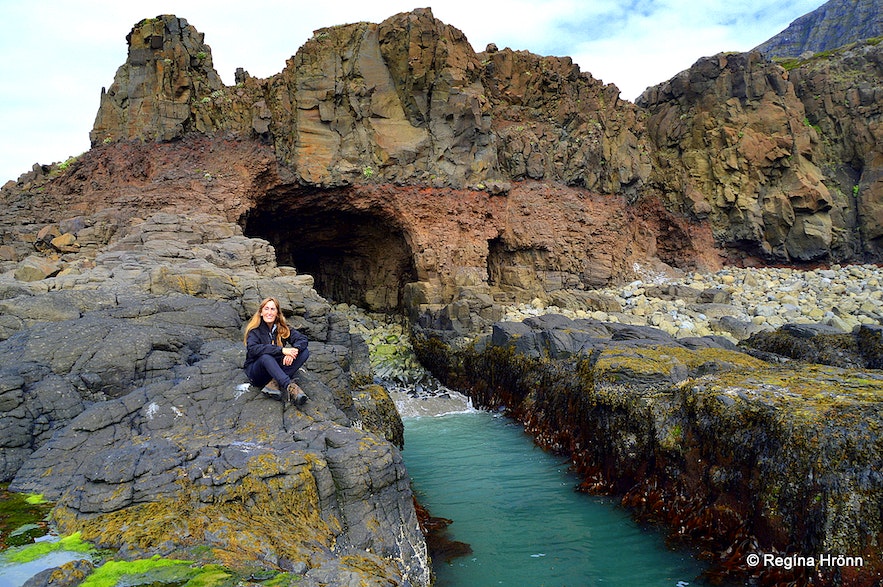 My father suffered from vertigo and that is why we never visited the Westfjords when I was growing up, even though my maternal grandmother was born in the Westfjords and we would have loved to see her valley Ingjaldssandur.

So it wasn't until we had a family reunion at Ingjaldssandur back in 2010 after my father had passed away, that my mother saw the birthplace of her mother for the first time.

The remote Ingjaldssandur in the Westfjords

To reach this valley you will have to drive over a heath and the first day we visited it my mother and I, it was foggy so we were quite scared not knowing the road and when to descend into the valley.

The following day it was sunny and lovely and this beautiful sight appeared (see my photo above). 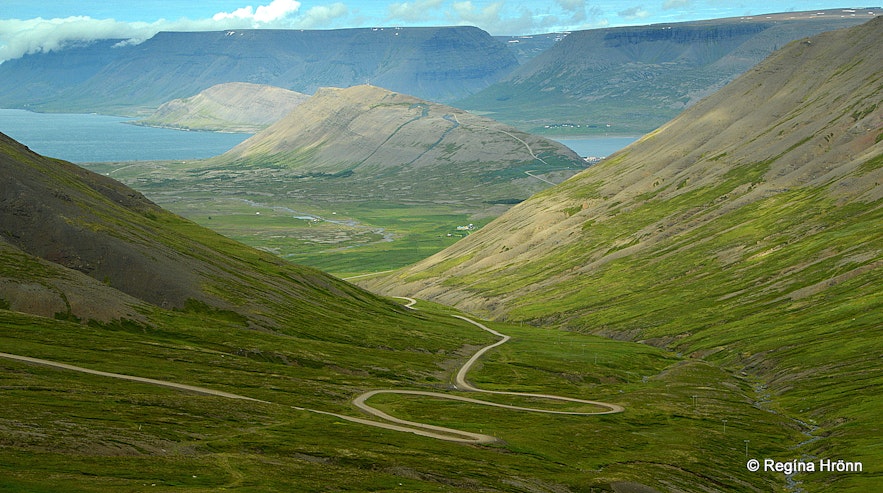 The road on Hrafnseyrarheiði heath - now a new tunnel, Dýrafjarðargöng, is another option instead of the heath

The Stone-man by the River Penna 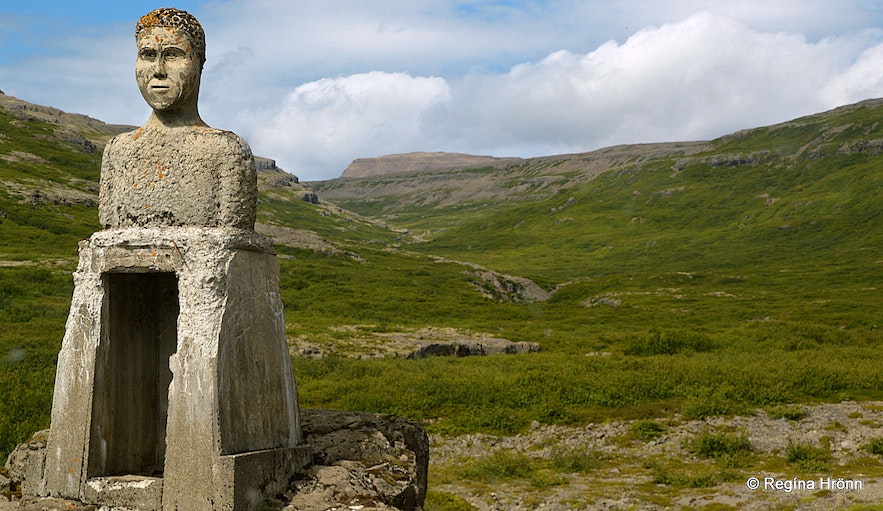 The stone man by the river Penna in the Westfjords

Now let's great the other stone man in the Westfjords, the stone man by the river Penna. He stands by Road 60 (Vestfjarðarvegur).

This stone man doesn't have a name but is sometimes called Pennukarlinn or the Man by the river Penna in Peningsdalur valley. I don't use that name for him though.

This stone man was built by the bridge builders, who built the 10-meter long bridge over the river Penna in 1958, and they used their spare time to create this stone man, much like the road construction workers did with Kleifabúi. 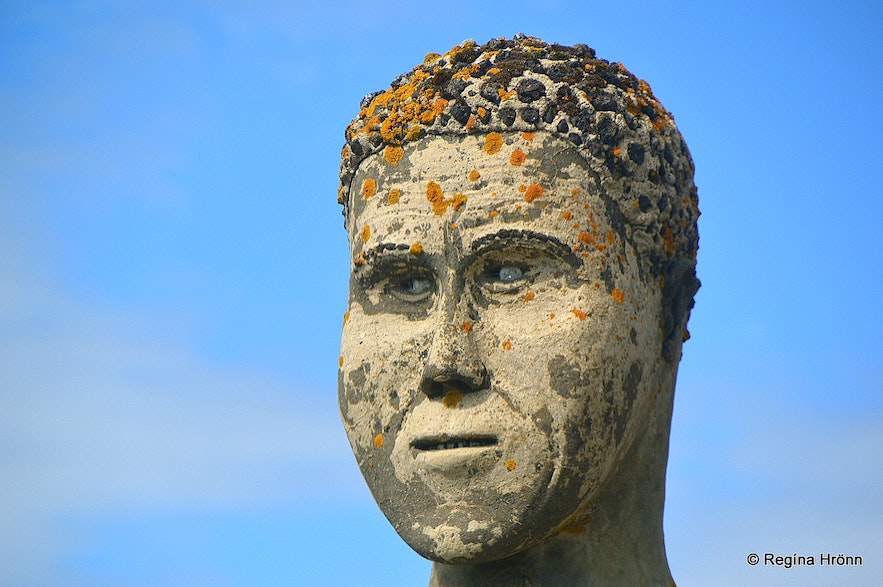 The stone man by the river Penna

Written on the information sign by the stone man is that the stone man had a striking resemblance to a certain road construction worker by the name of Gísli Gíslason from Hvammur farm on Barðaströnd.

But I don't think that these 2 stone-men were made to the liking of anybody, but that the liking of a certain local was something that was discussed after the heads had been sculpted. Magnús Ólafsson from Vestur-Botn in Patreksfjörður made the solid cement-head of the stone man by Penna. 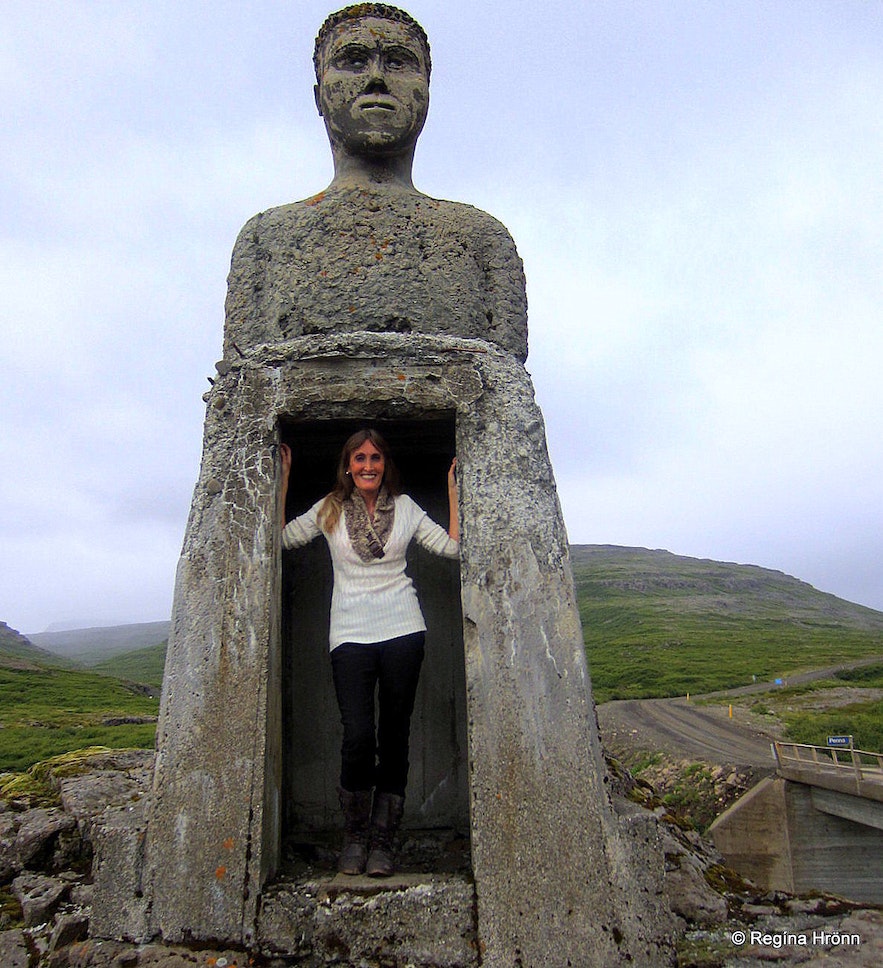 You can see photos of the stone man at Penna and the bridge construction on page 4 in Framkvæmdafréttir Vegagerðarinnar.

I like this type of folk art and think that these 2 stone men add life and character to the Westfjords. Others thank God that they didn't erect more stone men in this area. 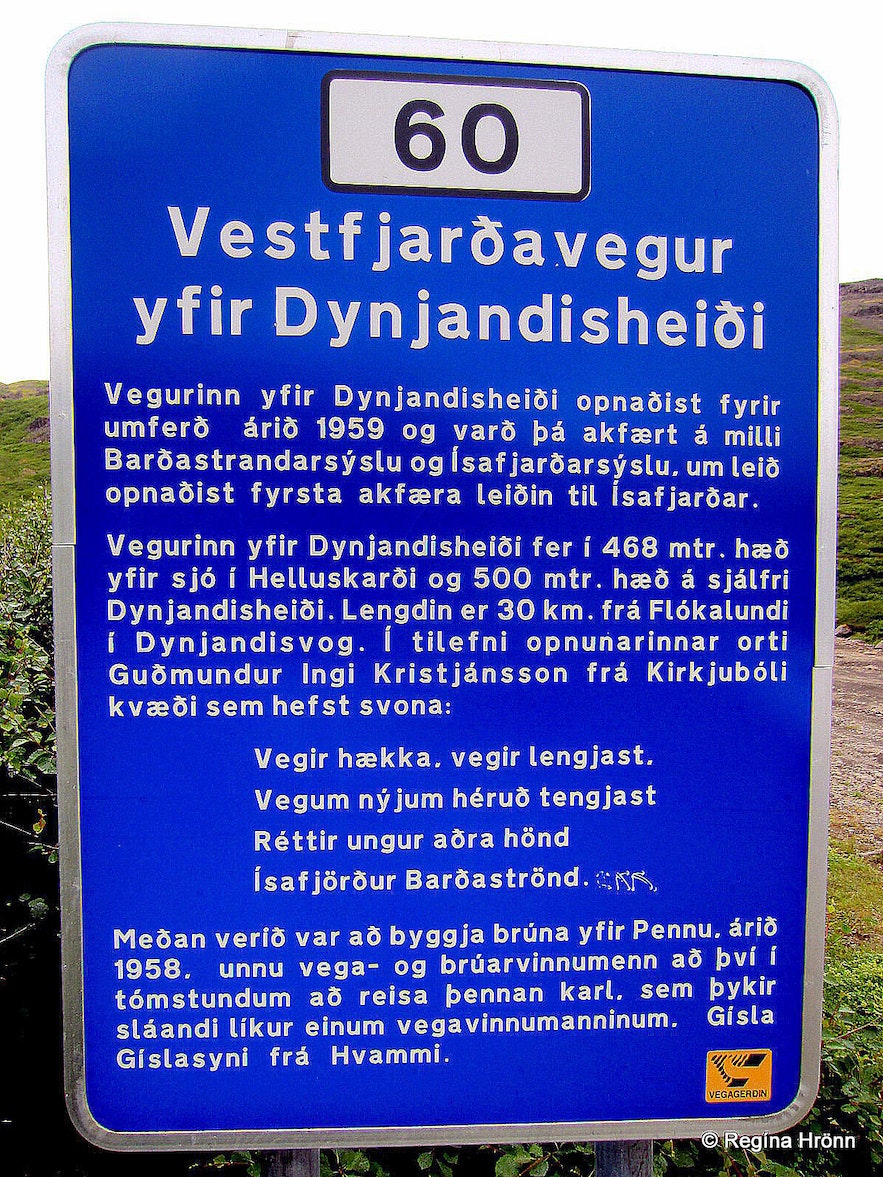 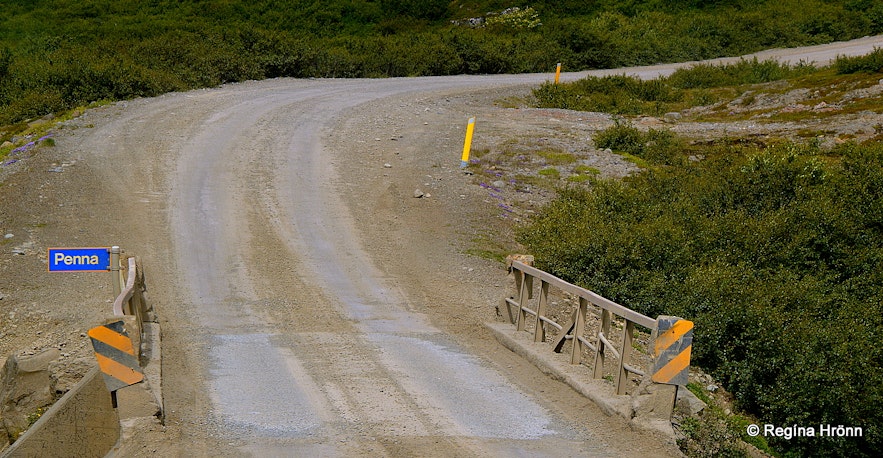 The bridge over Penna river

And from Penna, after visiting the stone man, you start driving towards Dynjandisheiði heath. And you will have an amazing view on the way.

You can see the location of the stone man at Penna on Google maps. It has been marked as Stone guardian in German.

When you reach Dynjandisvogur cove you will see the Jewel of the Westfjords of Iceland, the beautiful Dynjandi waterfall.

I have written a travel-blog about Dynjandi:

Have a lovely time in the Westfjords, and I hope that my travel-blog has shed some light on what these stone men represent :)