Located in the East of Iceland, Atlavík is a small cove in Hallormsstaðarskógur forest, on the shores of the lake Lagarfljót. A once-popular meeting place for locals and visitors, today Atlavík is a popular camping area due to the surrounding trees and the great view of the lake.

Atlavík is named after Graut-Atli Þiðrandason who came from Norway to Iceland’s east coast with his brother during the country’s settlement between 870 and 930. Graut-Atli, or Gruel-Atli, got his nickname after he was exiled and made to live in the woods of Hallormsstaður, surviving only on whatever scraps of food he could find and a gruel made from Icelandic moss.

To celebrate 1000 years of Icelandic settlement a festival was held in Atlavík in 1874. This wound up to be the first of many such events held at the spot during the summertime. The last festival held there was in the 1990s.

In 1984 Atlavík was visited by the Beatle’s drummer, Ringo Starr. Ringo arrived at the festival with his wife, Bond-girl Barbara Bach, to present the 'Hringstjörnuverðlaunin' music awards but ended up on stage with the Icelandic band Stuðmenn, performing the song “Johnny B. Good” to a roaring crowd of over 6000 people.

The Atlavík campsite is situated on the shores of Lögurinn lake, where the river Lagarfljót flows through it. The lake measures 53 square kilometres, is 25 kilometres long and its greatest width is 2,5 kilometres. As with the lake Loch Ness in Scotland, a mysterious and seldom seen monster, called Lagarfljótsormurinn, is said to live in the depths of Lagarfljót.

Providing shelter from the elements, the trees surrounding the Atlavík campsite are a part of Iceland’s largest forest, Hallormsstaðarskógur. The birchwood forest is around 740 hectares and includes over 40 kilometres of footpaths and marked trails. From Atlavík there is 1,5 km trail leading up to Hallormsstaður’s tree museum. 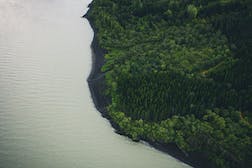 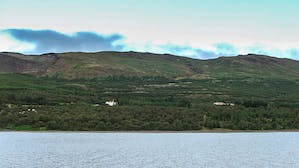 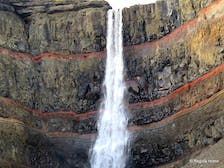 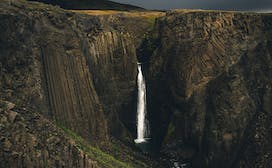 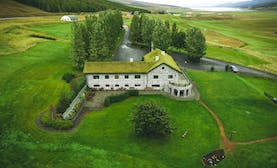