In my last travel-blog I showed you the geothermal area at Ölkelduháls, which was all lit up by the setting sun. In this travel-blog I am going to show you another area where the earth is boiling - the Eldvörp row of craters in SW-Iceland which we visited by sunset.

The steam, the total stillness, and the orange rays of the sun created a very mystical atmosphere. 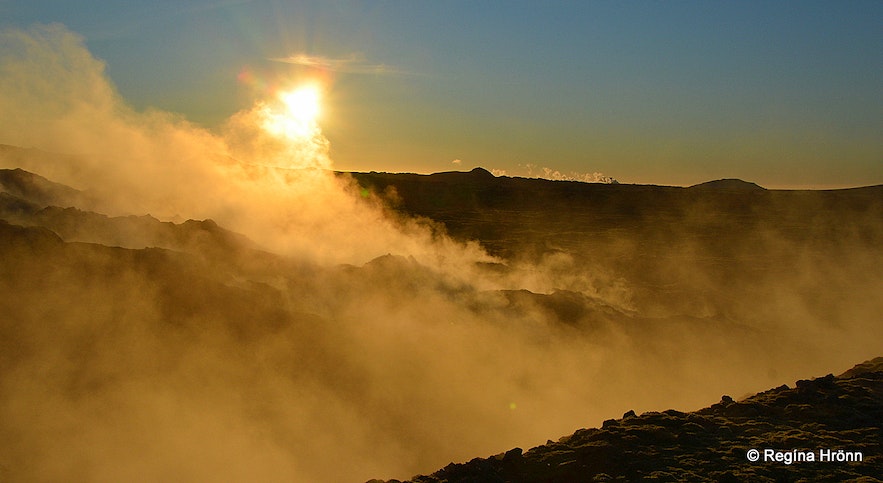 In the distance, you can see the steam from the Gunnuhver hot spring

Eldvörp is a long row of craters, stretching for approximately 10 km.

And the lava flow by Eldvörp is called the Eldvarpahraun lava field and covers some 20 sq. km.

This area is for sure a true wonderland and reminded me a bit of a part of the hike in Leirhnjúkur up north - Mývatn in North-Iceland - Part IV - Mt. Námafjall, Krafla & Leirhnjúkur Geothermal Areas. 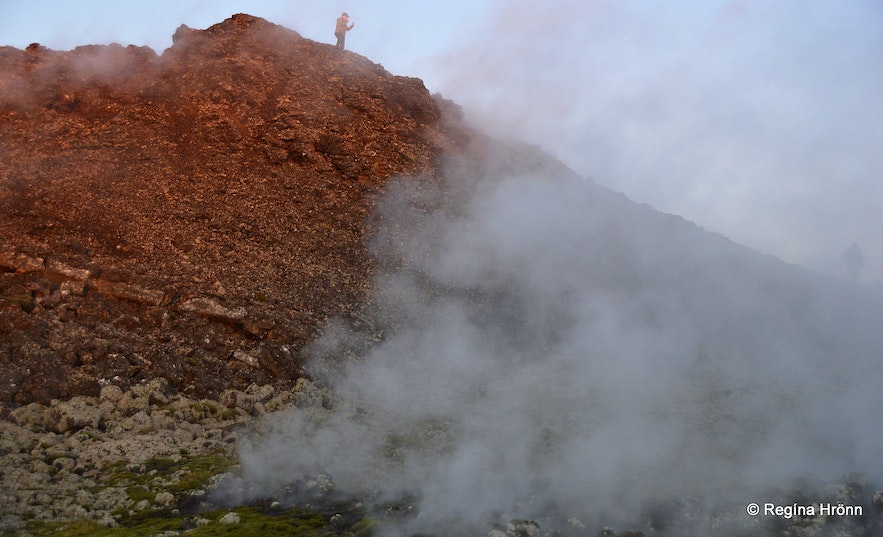 On top of one of the Eldvörp craters

Eldvörp erupted in the 13th century from 1210-1240, with the most powerful activity in this area in 1226, but there is still steam coming from the ground.

The geothermal area is approx. 100 meters in diameter and from it the steam you can see in my photos rises.

Just imagine, at the time when Elvörp erupted, the noted Snorri Sturluson was alive!

The craters are scoria and spatter cones some 60-70 meters above sea level.  I have heard them referred to as the Little Lakagígar craters.

I have shown you scoria and spatter cones in other travel-blogs, like this one Tröllabörn - the Troll Children in SW-Iceland and The Peculiar Knútsstaðaborg Lava Chamber in Aðaldalshraun in North Iceland.

Not that I am a geologist, I am just showing you interesting places to visit in my country.

I, who have been living here on the southwest corner of Iceland for my whole life, visited Eldvörp for the first time in 2021! I had seen the steam from afar from the road, and it had been on our agenda for years to visit Eldvörp.

So I stayed in the car and watched my friends disappear into the steam. They came back a couple of minutes later soaking wet.

The second time I visited Eldvörp was that same year, late in October. A finback had beached in Þorlákshöfn town and everybody was checking it out.

It is amazing being so close to this magnificent animal. We don't know why it beached, but it happens often that whales beach in Iceland. Maybe they are ill, have had an accident, or lose their way.

Afterward, we went to Grindavík town and decided on watching the sunset from Eldvörp since we were in this area. 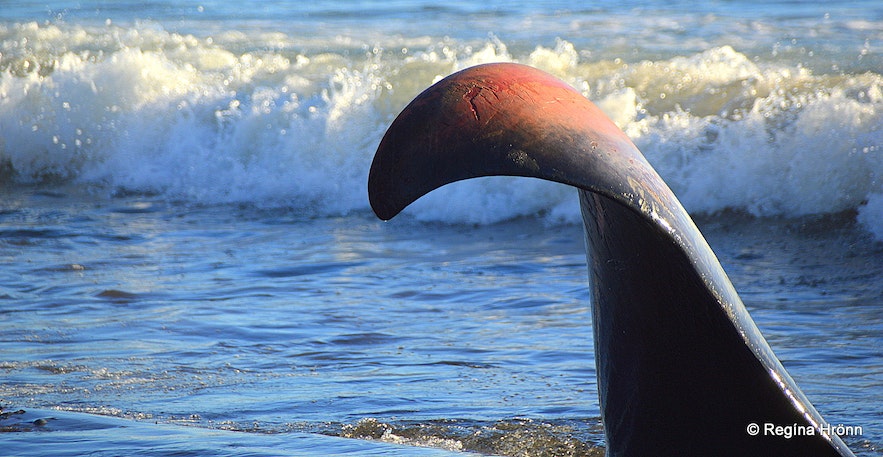 It is not easy finding the road to Eldvörp as it is not marked, but it is an off-road from road 426, a couple of km west of the Blue lagoon and Mt. Þorbjörn  It is a gravel road and we drove alongside huge pipes.

There are no signs leading the way, but we saw the steam from the road when we stopped by Mt. Þorbjörn. We just drove to the end of the road and parked the car. Again, no sign. One borehole though from 1983 - EH-1.

There were speculations of more research drilling and power harnessing at Eldvörp, which I hope will not come to fruition as this area is so special and it could cause irreparable damage.

Steam at the geothermal area at Eldvörp

There is a marked trail called Reykjavegur, which leads through Eldvörp.

We didn't explore that trail, but stayed by the geothermal area and craters closest to the parking lot. You can watch a drone video by Rafn Sigurbjörnsson, a landscape and nature documentary photographer, for an excellent view of the shapely craters from above.

Several caves and ruins can be seen at Eldvörp. We only visited a very small part of the 10 km long row of craters, but we visited one cave. 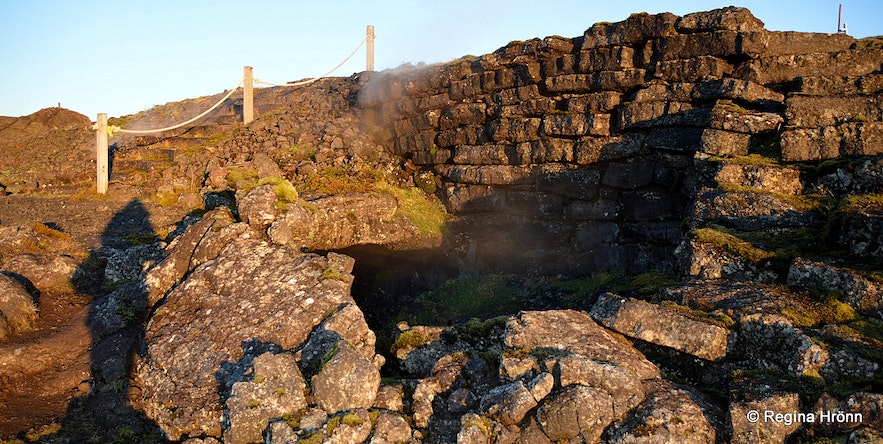 One of the caves at Eldvörp with stacked walls

This cave was found by accident back in 1982 when Hitaveita Suðurnesja (the Suðurnes District Heating Utility) was drilling in this part.

The lava broke from the weight of a bulldozer and the cave was discovered, with some bones inside and indications of human habitation, i.e. stacked walls and stones.

This only goes to show how fragile this area is and should in my opinion remain intact.

When the National Museum of Iceland examined the cave they took the bones into preservation.

They were sheep bones from 6 sheep, so the meat was most likely boiled in a nearby crater using the geothermal heat from the boiling ground beneath.

But we have no idea when this was or who stayed in the cave. 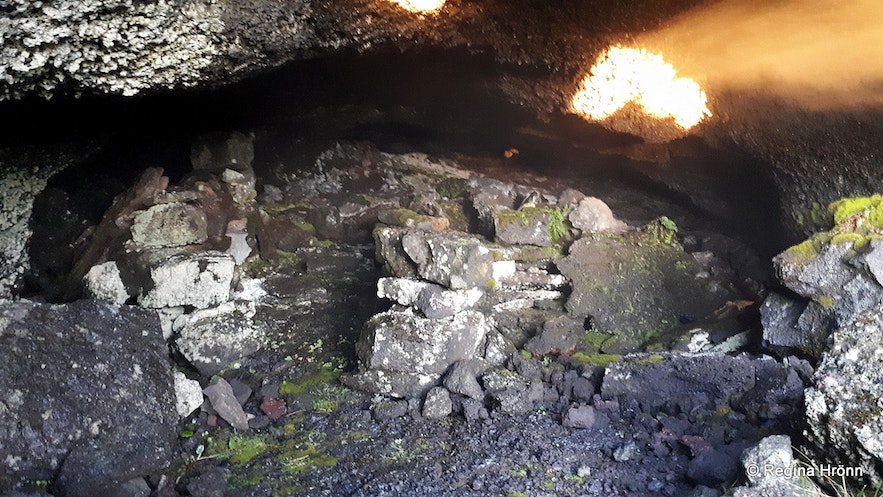 We peeked into the cave but didn't want to enter it

The cave is 6-8 meters wide and 30 meters long, and the height is approx. 1.5 meters at the highest point, 40-50 cm at the lowest point (source: Visit Reykjanes, Þjóðminjasafnið, and Ferlir - Eldvörp).

Maybe some outlaws stayed in this cave in ancient times? This cave is referred to as Útilegumannahellirinn or the Cave of the Outlaws. 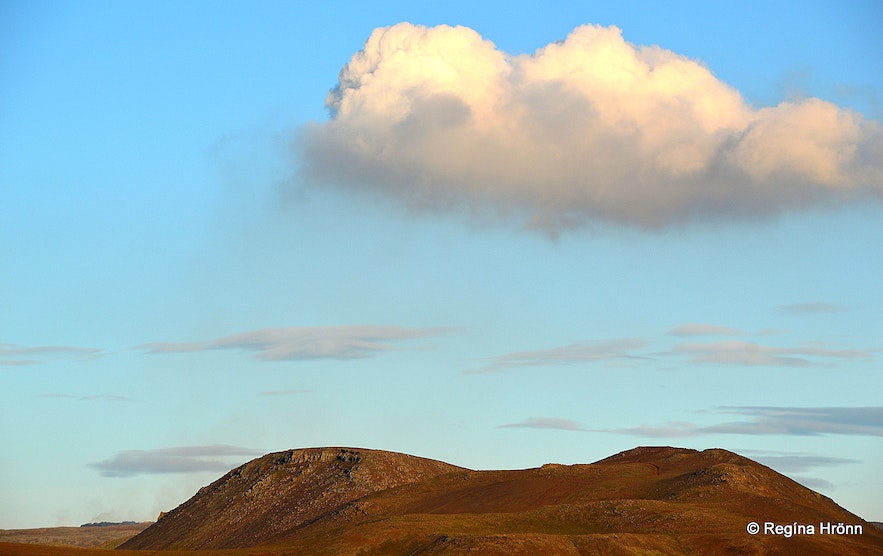 Sometimes it is dangerous to enter the caves due to high levels of gas, as was the case prior to the volcanic eruption by Mt. Fagradalsfjall.

So be careful when entering caves at Eldvörp, as the Reykjanesskagi peninsula seems to have become alive again.

The Volcanic Eruption in Mt. Fagradalsfjall and Geldingadalir in SW-Iceland 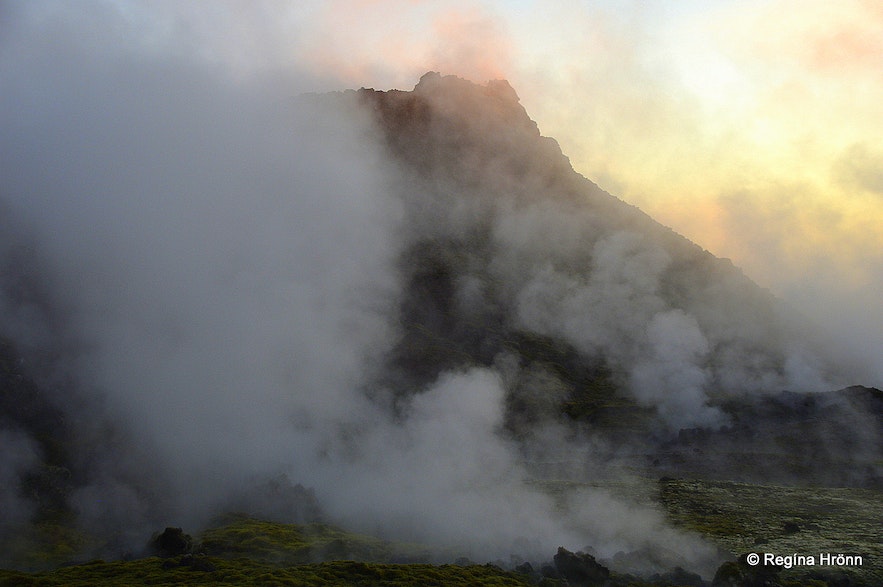 Eldvörp was created in the Reykjaneseldar or the Reykjanes Fires, a volcano-tectonic episode, but this area sits on the Mid-Atlantic Ridge and the North-American and Eurasian plates. Here is the Reykjaneshryggur Ridge.

At Brúin milli heimsálfa - the Bridge between Continents west of Eldvörp, you can see the tectonic plates above ground, which is a rare sight.

The footbridge symbolically connects the tectonic plates and you can cross from one continent to another. And get a certificate for having done so at the Visitor Center Reykjanes Geopark at Duushús in Keflavík town.

Brúin milli heimsálfa - the Bridge between continents - my friend Óli the guide on the bridge, but we explored this area together

Women from the neighbouring area, walked from Grindavík via a trail called Brauðstígur - the Bread trail, to Eldvörp and made use of the steam and baked bread in the heat.

This is still done today in other geothermal areas in Iceland, f.ex. at Laugarvatn, the Geysir area, and at Mývatn up north. 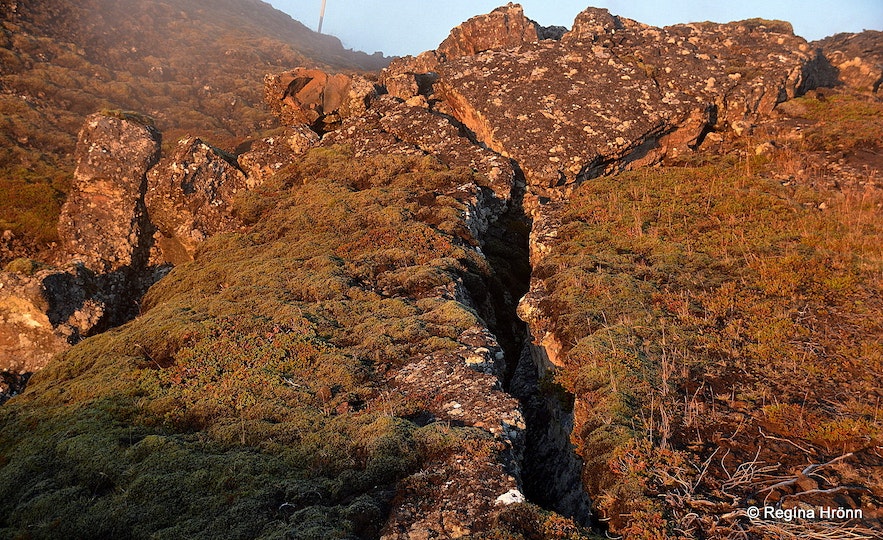 Cracks in the earth at Eldvörp

I followed a path in the lava and the earth was cracked in some places. So be careful when you walk in this area.

I was mesmerized by the total stillness and mystical atmosphere by Eldvörp, yet a bit afraid of being here so late, as the stillness was almost eerie.

And the steam was massive and engulfed me by the crater. And in geothermal areas, you want to see where you walk. 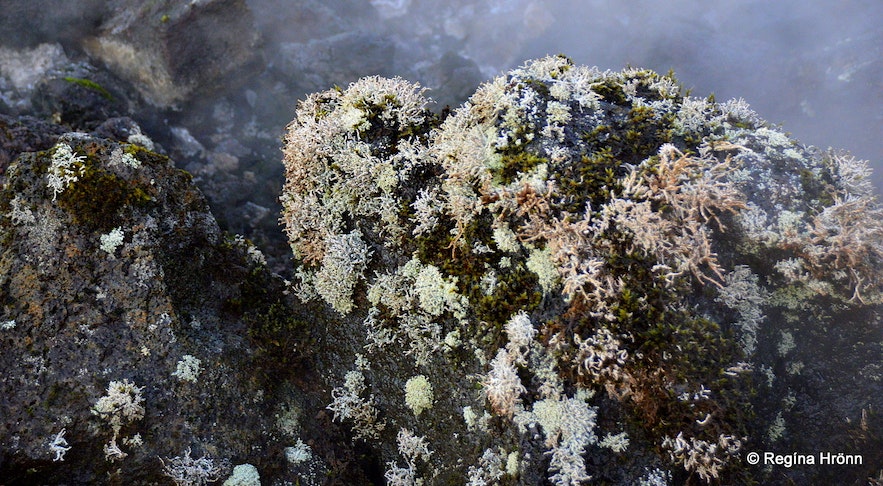 After exploring parts of Eldvörp, that is a couple of craters and the geothermal area closest to the parking lot, the sun was about to set.

We walked to the top of one of the craters and watched the sunset from there.

It was magical - it was like we had entered another world, no words can describe it. 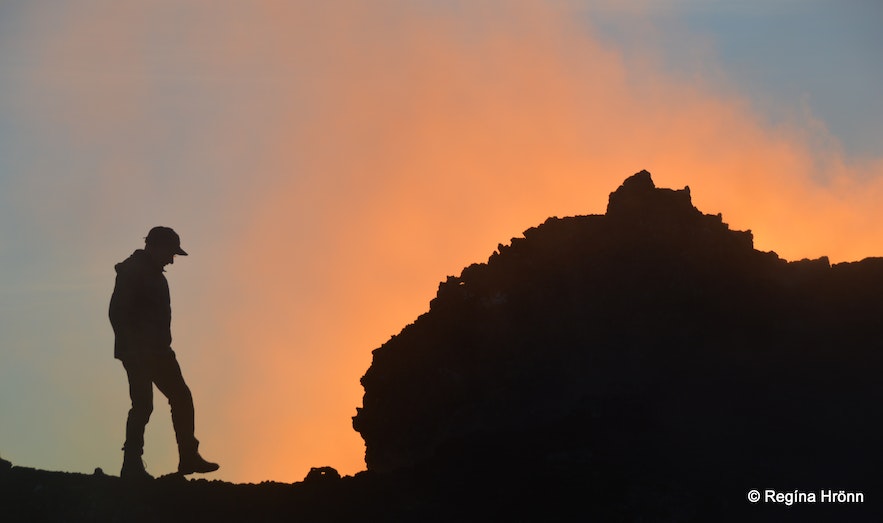 We didn't watch the sun set completely, as nobody wants to be in such hot areas in total darkness.

So we hurried down from the crater and to the car.

It is not safe to be in geothermal areas and lava fields in the dark as I told you in my last travel-blog: The colourful Geothermal Areas by Mt. Ölkelduhnúkur and Ölkelduháls in South Iceland. 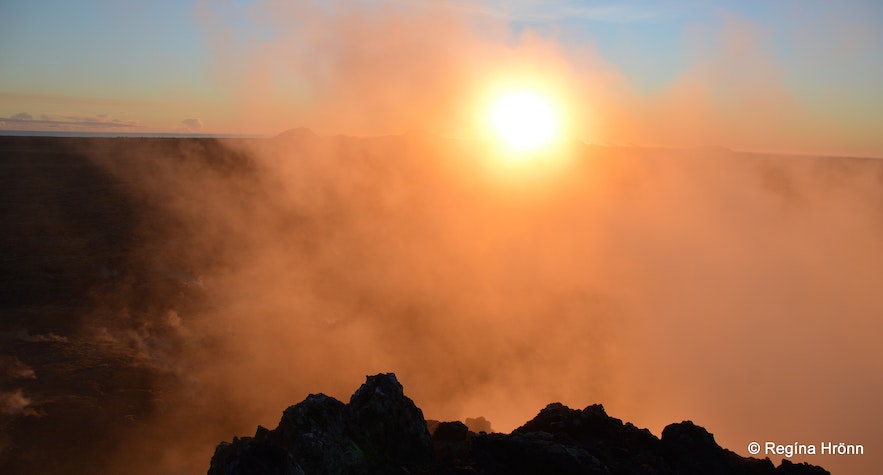 The sunset was amazing in the geothermal steam from Eldvörp

Just one word of warning, before I wrap up. Don't make a right turn unto another gravel road when you reach the Eldvörp craters, or you will end up on the worst road ever.

My husband wants to drive on all the roads in Iceland. After visiting Eldvörp for the first time he wanted to take that road, which I strongly objected to as it was a very bad gravel road, and I suffer from car sickness.

I think that there was a sign saying that this was a private road, only for the employees of HS Orka hf. But as stubborn as he is he paid no attention to me nor the sign. 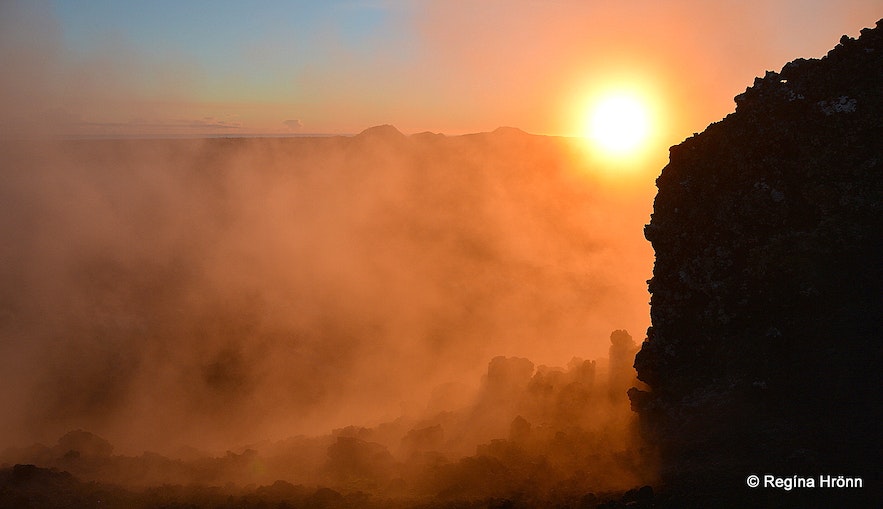 The road went from bad to worse with large lava rocks on the road and I had to get out and walk alongside the car.

When we finally reached the end of the road it was closed with a rail!

We were quite startled as we did not want to drive back on this bad road. Fortunately, the rail opened when the car approached and we were now close to the Reykjanes power plant.

A perfect sunset - poetry in motion

There is much more that can be experienced at Eldvörp than I have shown you in this travel-blog. I will go back and visit this area in the daylight and write another travel-blog.

Here I have zoomed in on the parking by the end of the road, where we stopped and had a look around. You can also see the location of the craters on the Reykjanesgeopark website with more photos.

Have a lovely time at Eldvörp :) 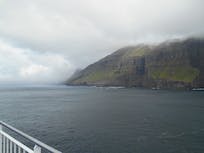 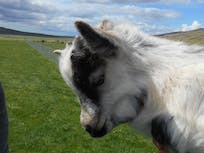