Get a vacation
Book your tours
Rent a car
Find stays
Read info
COVID-19 information & support
Book your trip now
Guide to IcelandConnect with localsRegína Hrönn RagnarsdóttirHave you met the angry Ghost at Gunnuhver Mud Pool in Reykjanes in SW-Iceland?

Gunnuhver is the collective name for this geothermal area, named after the angry female ghost Guðrún, or 'Gunna' for short. Here, you will find fumaroles, steam vents, and mud pools and will even risk getting lost amidst the steam. This can make visiting Gunnihver quite unnerving, if not supernatural.

At the Gunnuhver geothermal area, you will find Iceland's largest mud pool, as well as wooden paths and railings with viewing platforms. The large mud pool is located high up in the geothermal area and measures an incredible 20 meters across.

Let's not forget that geothermal areas are dangerous areas, so let's be cautious while visiting them and always stick to the paths.

The activity of this geothermal area changes from time to time (I remember back in 2008 how it increased to a great extent). Hot clay was shot 2-4 metres into the air, steam vents opened and steam started streaming from the area, even drifting across the road; proof of the dangers of geothermal energy! 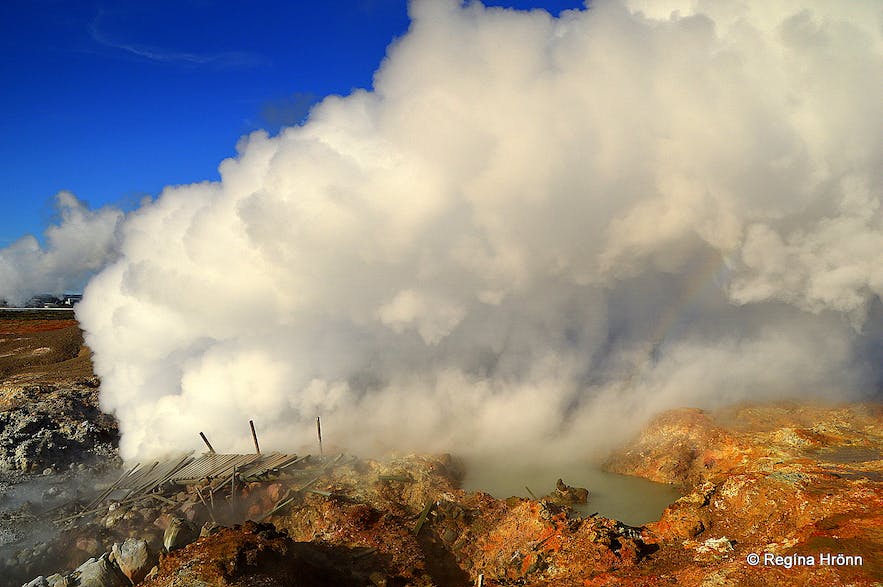 Gunnuhver geothermal area was closed off for some 2 years during this increased activity and was opened again for visits in 2010. Some might say that it looks as though Gunna the Ghost is trying to escape.

During this period, the observation platform by Gunnuhver, where one could peek into the massive mud pool, crumbled! You can now see the remains of the platform by the hot spring, looking like debris of some sort.

I am often asked the question of why we don't tidy up at Gunnuhver, why we allow debris in this area? Now you know the answer; it is left there as a reminder of what happened back then, and how precarious and ever-changing geothermal areas are. 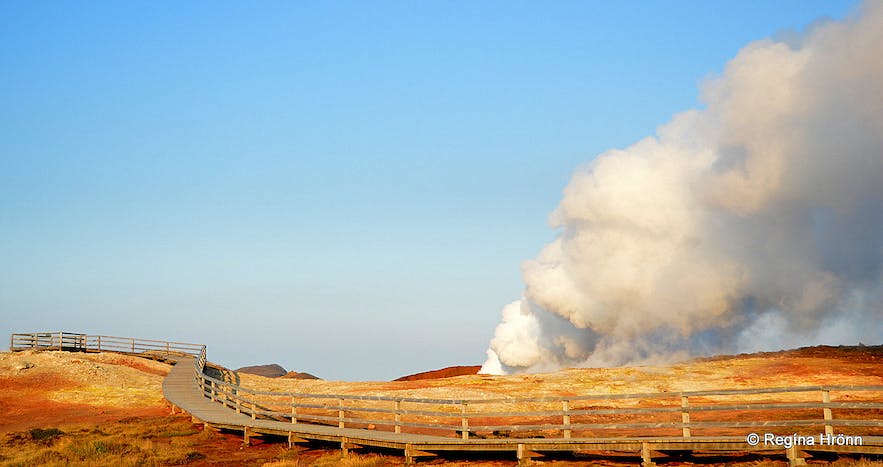 In September 2014, the mud pool started shooting up hot clay and dirty water from the geothermal area many meters into the sky. A lot more steam than usual appeared and a new mud pool was created. One of the platforms at the geothermal area had to be closed off again for a short period of time for safety reasons.

Sometimes the steam from Gunnuhver totally engulfs you—my husband took the below photo seconds before I disappeared into the steam. I am not very keen on being engulfed by the steam, or for turning my back to a massive, thunderous mud pool, for that matter, as you can see from my non-existent smile, but my husband finds it to be hilarious, so I humoured him...

We have records of a myriad of earthquakes on the Reykjanes peninsula from the year 1151 until today (2020) when the earth has been trembling more than usual. 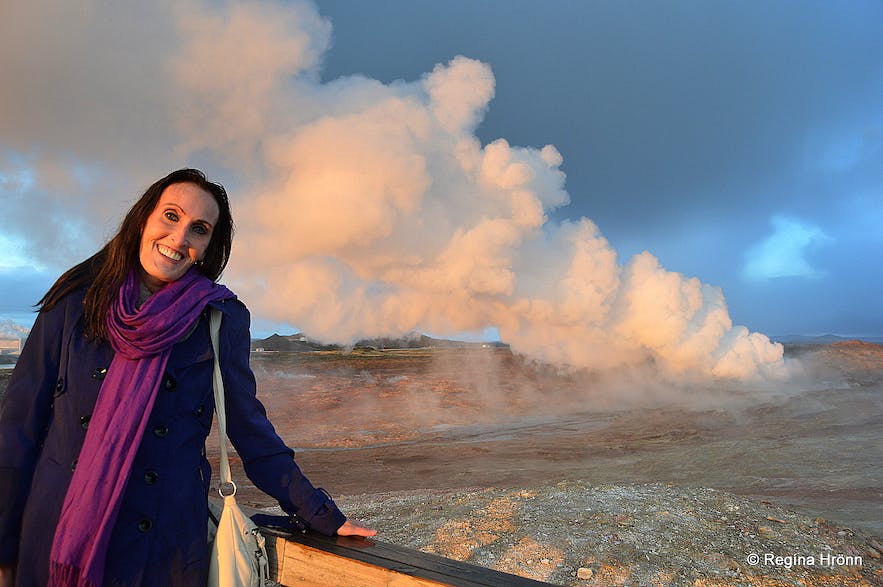 Now I want to tell you the story of Gunna the Ghost. The folklore of Guðrún (Gunna) is written in Þjóðsögur Jóns Árnasonar - the Folklore of Jón Árnason, which I often refer to in my travel-blogs:

"Vilhjálmur Jónsson (lögréttumaður) lived at Kirkjuból on the Romshvalanes peninsula; he died in 1706. He had a falling out with a woman called Guðrún Önundardóttir (1646-1706), because of a pot he was supposed to have taken from her, probably as a part of a payment for a debt. The woman was so upset that she started threatening Vilhjálmur. 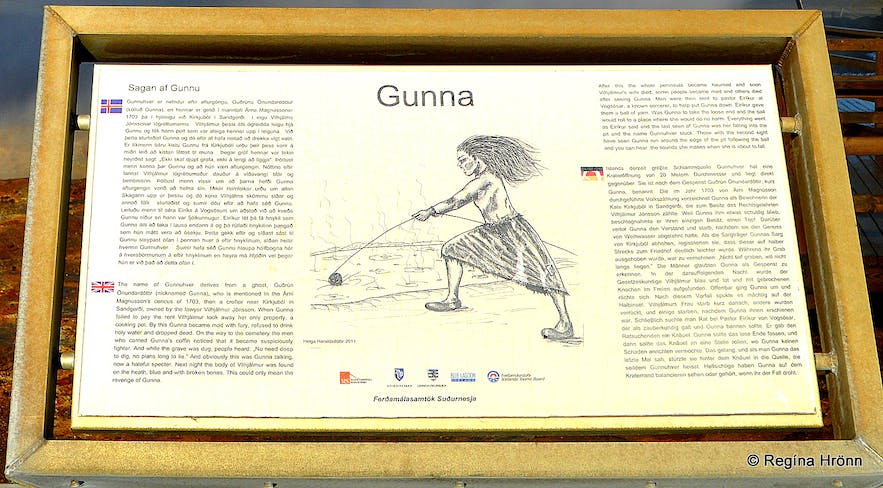 Gunna died and, when she was buried, Vilhjálmur was present, but he was on his way through the so-called Skagi, outside of Útskálar (on the Reykjanes peninsula RHR). He went homewards that night but was found dead the day after at Skagi—his body was blue and broken.

His body was brought to the chapel at Kirkjuból and Gísli the minister at Útskálar was asked to stay awake and guard the body that night, as everybody thought that Gunna had killed him and that she was back from the dead. The minister said that he had a difficult time protecting the body from the broad (Gunna) so she wouldn't pull it from him. 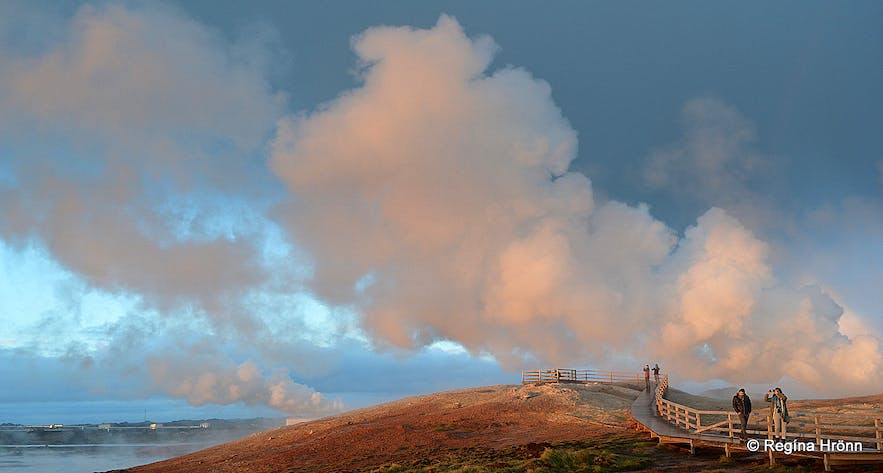 The ghost grew stronger and stronger and the widow of Vilhjálmur died suddenly; Gunna was blamed for her death.

Some of the people travelling through Skagi lost their way and others lost their minds. All this was the doing of Guðrún, and people started seeing the ghost with their bare eyes. Gunna did so much damage that neither men nor animals could pass through. 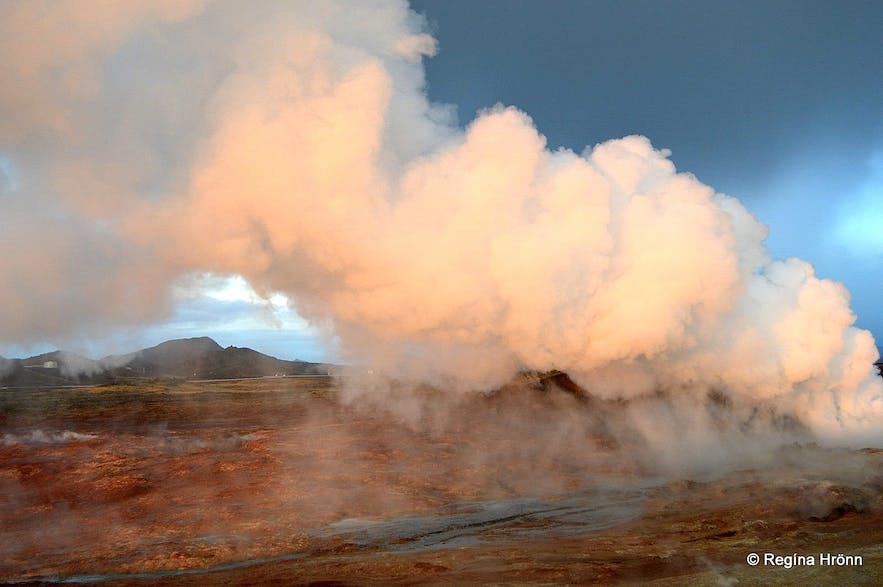 The men went on their way to meet minister Eiríkur and did everything they had been ordered to do. He greeted them warmly, but, as they were preparing to return back, he gave them a ball of wool and told them to have Gunna grab hold of the loose end. He said that the ball would then roll to the place where Gunna would be allowed to be in peace. 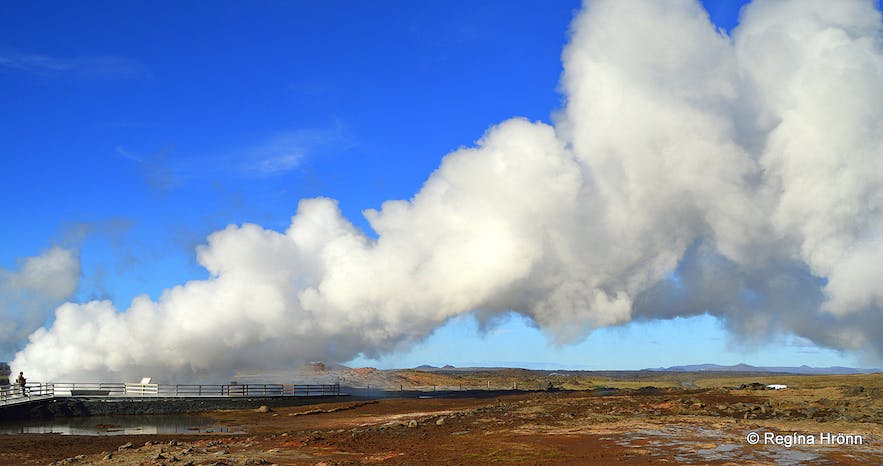 The men now returned back home and followed the minister's orders. As soon as Gunna had grabbed the loose end of the ball of wool it started rolling and she followed. The last that was seen of the ball of wool and Gunna was that they plunged into the mud pool in Reykjanes in South-Iceland, which after this incident was called Gunnuhver hot spring.

Since then nobody has been hurt by the ghost of Gunna. 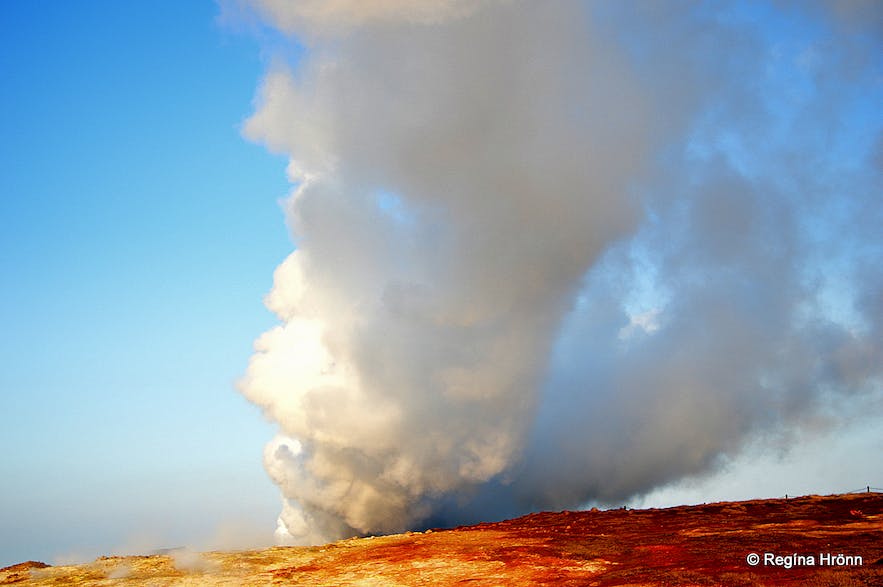 Some say that the ball of wool fell into the mud pool, but that Gunna held onto the end; the end is so long that Gunna stands half-bent up on the edge of the mud pool. She patters on the edge, as she does not want to fall into this slough".

Gunna's story is told a bit differently on the information sign at the geothermal area, but my account is a direct translation of the folklore of Gunnuhver.

What makes Gunnuhver geothermal area extra special, apart from being the location of Iceland's largest mud pool and Gunna the ghost, is that the water here is mixed with seawater.

There is much more to see and do in the vicinity of Gunnuhver. From the geothermal area, you will see the lighthouse, Reykjanesviti, standing tall on a hill. And by the shore, you will see the distinctive rock formations at Reykjanestá, which is one of the many popular stops on the Reykjanes peninsula.

By the rock formations, you will notice a big bronze statue of the extinct great auk (geirfugl). It was erected in the memory of the last 2 great auks, which were killed on the 3rd of June 1844 by Eldey island, which can be seen in the distance from the shore.

The statue is a part of the Last Bird Project by the artist Todd McGrain and stands here on this spot as a reminder to us human beings of never killing animals to their extinction. 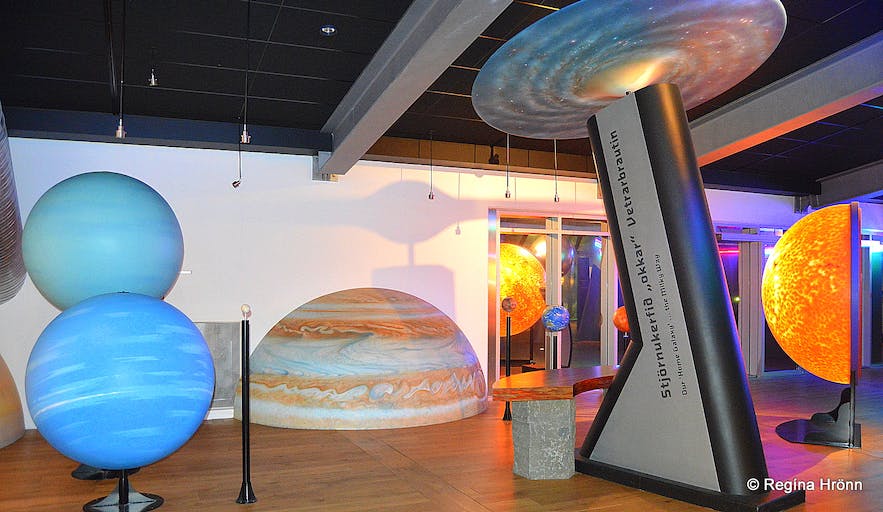 Next to the Gunnuhver geothermal area, you will see the colourful geothermal Kísilhóll hill. Behind Kísilhóll you will find Reykjanesvirkjun - Reykjanes Geothermal Power Plant, where you can pop in for a visit to the interactive exhibition Power Plant Earth. I have visited this exhibition and can recommend it - it is very informative.

Gunnuhver is located some 80 km away from Reykjavík. To visit this area you can either join one of the many guided tours available or rent a car in Reykjavík and visit it on your own. 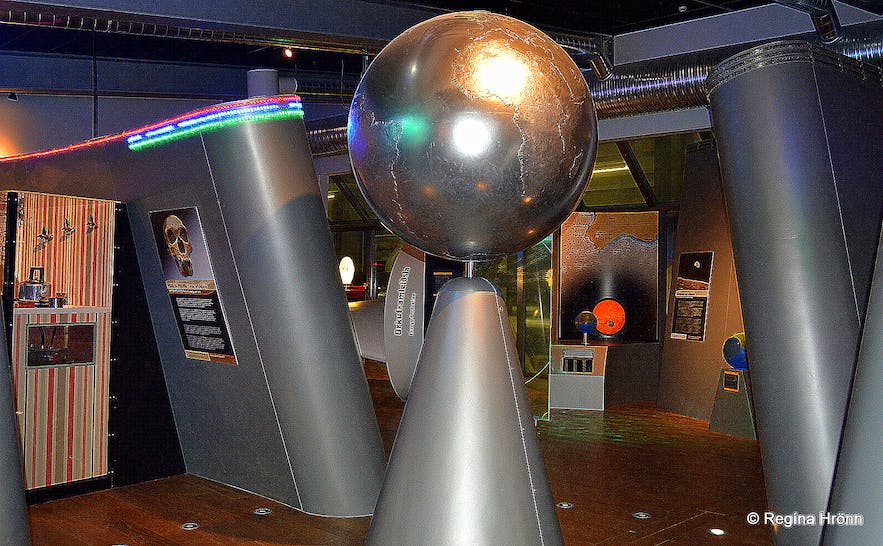 Check out the Reykjanes tours on offer: 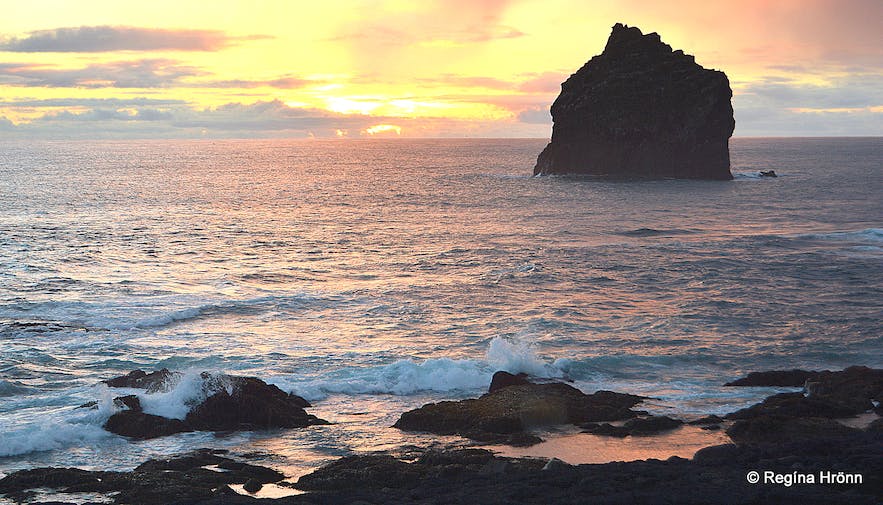 Fat-Bike Adventure on the Reykjanes Peninsula

Caving on the Reykjanes Peninsula | Half-Day Tour from Reykjavik 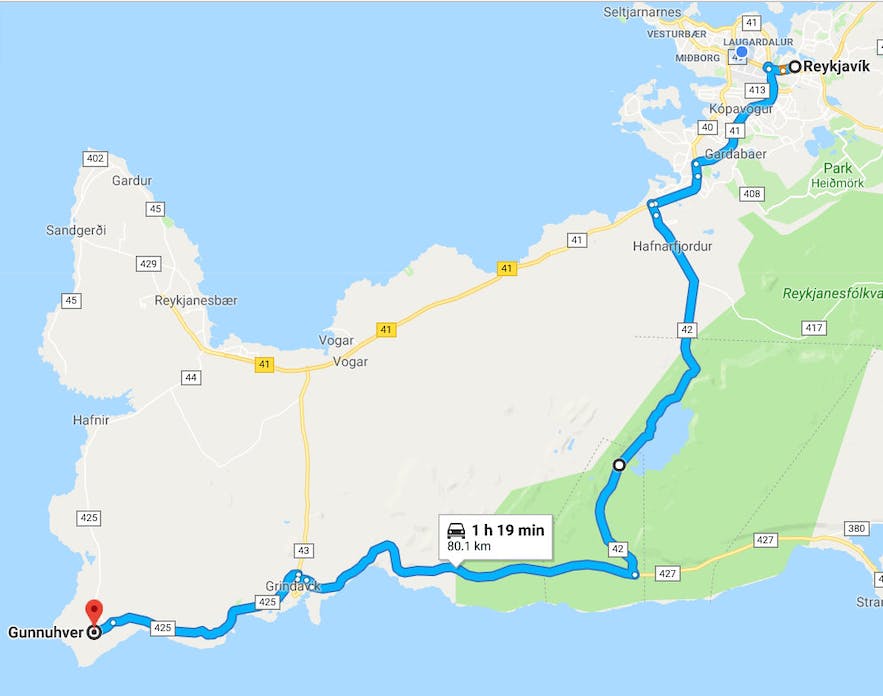 Visiting the Reykjanes peninsula makes for a lovely day tour with a relaxing soak in the Blue Lagoon at the end of the day before returning back to Reykjavík. 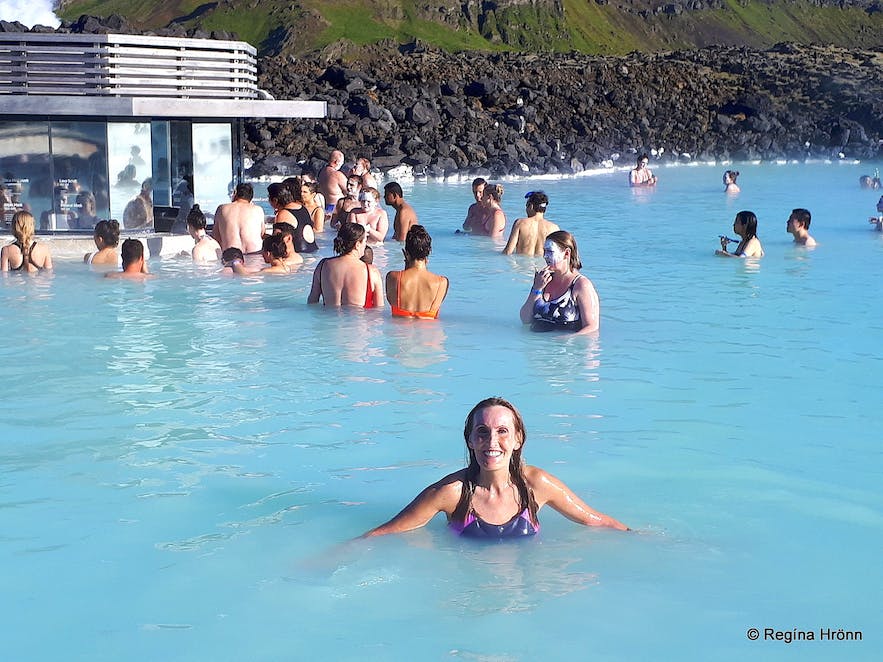 The circle around the Reykjanes peninsula is called the Blue Diamond Circle named after the Blue lagoon, but we have several jewel circles in Iceland:

The Diamond Circle up North

The Silver Circle of West Iceland 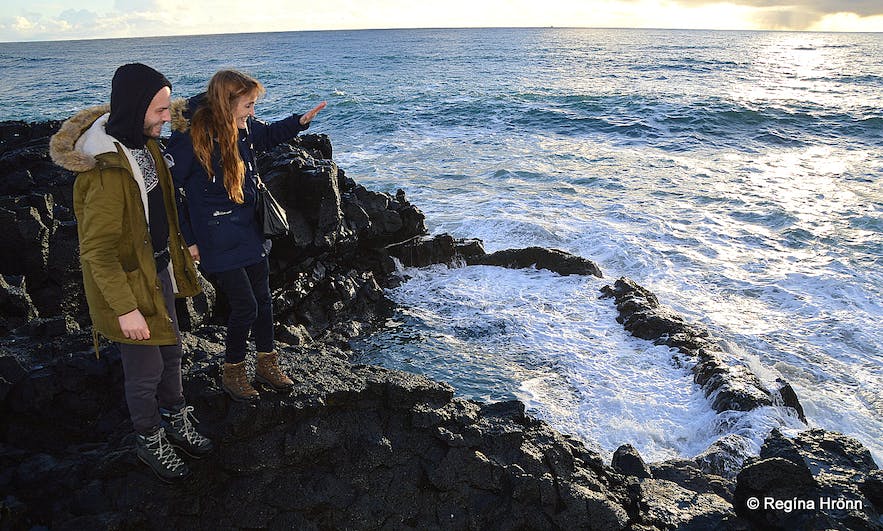 By Brimketill - the waves were so tall that they almost caught us!

Reykjanes is a UNESCO Global Geo Park and there are many more sights, like Brimketill and the Bridge between two Continents, where you can see the tectonic plates above ground. 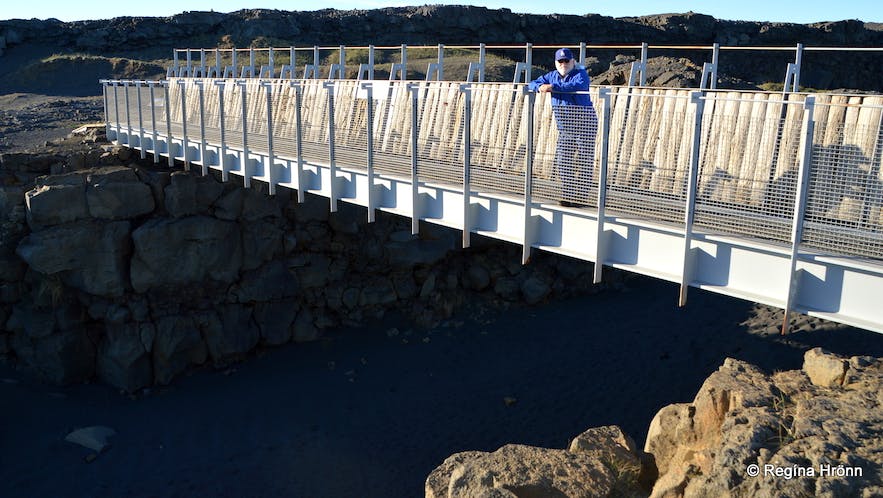 By now I have shown you a couple of the many interesting sights on the volcanic Reykjanes peninsula:

Have a lovely time at Gunnuhver geothermal area and the Reykjanes peninsula :)