Finally, I was able to see the volcanic eruption in Mt. Fagradalsfjall on the Reykjanesskagi peninsula with my own eyes. We had booked a helicopter flight at the start of the eruption, but it wasn't until 7 weeks later that it was our turn, as the demand for a helicopter flight to the volcano was so great.

The people on the long waiting list were mostly Icelanders as no tourists were coming over to Iceland due to the Covid restrictions. We all wanted to see the volcanic eruptions and hikers were flocking to the volcano. 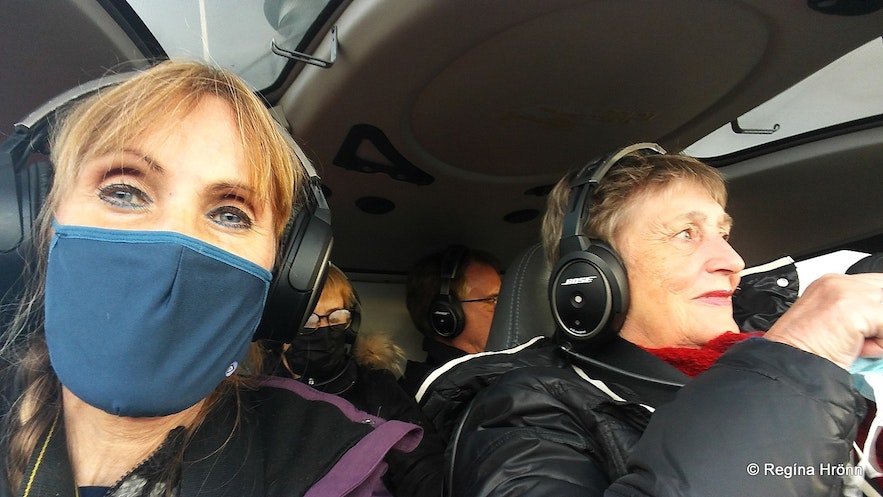 With my mother-in-law in the helicopter

See my travel blog: The Volcanic Eruption in Fagradalsfjall and Geldingadalir on Reykjanesskagi in SW-Iceland

Back then it erupted from one crater, but since then several craters have appeared, but the one in my photos is the only one that is active today.

The volcanic crater is getting bigger and bigger

My brother-in-law lives in London and he invited his mother on a helicopter ride for her birthday on the 3rd of April. And I decided on joining her - my husband invited me on this ride :)

Little did we know that we would be visiting the volcanic eruption almost 2 months later. And I didn't write a travel blog for 2 months as I was always waiting for the helicopter ride ;)

The lava flow as seen from the helicopter

Our flight was to be at 10:30 in the morning, but that helicopter ride was canceled due to mechanical problems... and our heart sank. But they, fortunately, rescheduled our tour to 18:30 that same day.

The helicopter ride takes only 15 minutes from Reykjavík and it was great to see the volcanic landscape of the Reykjanesskagi peninsula from above. Here you will see many volcanoes and lava fields from various eruptions, some of them thousands of years old.

We landed on Mt. Stóri-Hrútur which is the mountain behind the smoke

I took as many photos as I could through the window, hoping that one of them would be ok. While also trying to be in the moment and enjoy this fantastic sight. It was surreal and the new lava field looked like it was glowing. 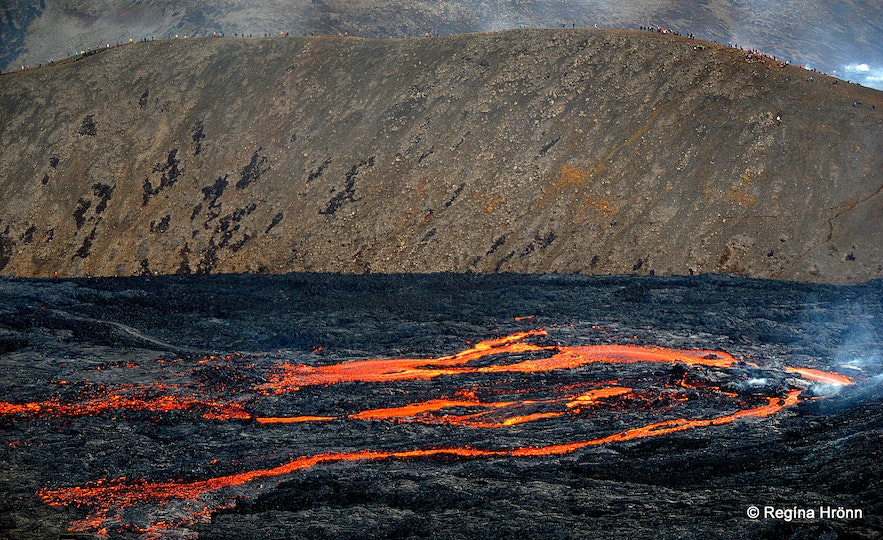 Here you can see the hikers on top of the hill. We landed on a much bigger mountain

The weather had changed and a big black cloud was hanging over the volcanic area, casting a shadow on it, so it was difficult to take decent photos.

The whole of May 2021 had been the sunniest ever, so I was a bit disappointed that I was not getting enough light for good photos, but I think they came out ok, also given that there were blue fumes rising from the volcanic area. 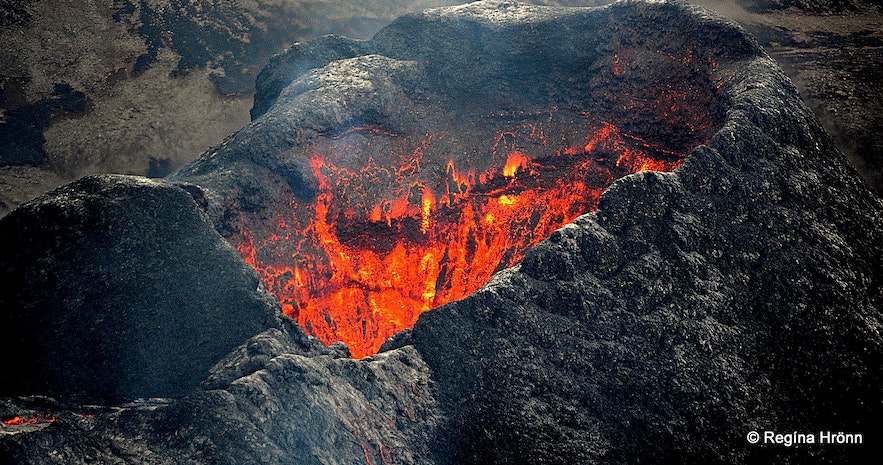 This crater erupts at about 7-10 minutes intervals, which is very different from the beginning of the eruption when it erupted constantly. So it behaves more like a geyser really, it empties itself, then the pressure and gasses build up making it erupt again.

When we flew over it, it had just started erupting, but it was impossible for me, sitting in the back, to get a photo of the eruption, only the lava flow.

We could see the hikers standing on the hill like small ants watching the volcano. They had hiked from Suðurstrandarvegur road, but many thousand people have hiked to the volcano since it started erupting, as I told you about in my previous travel blog. 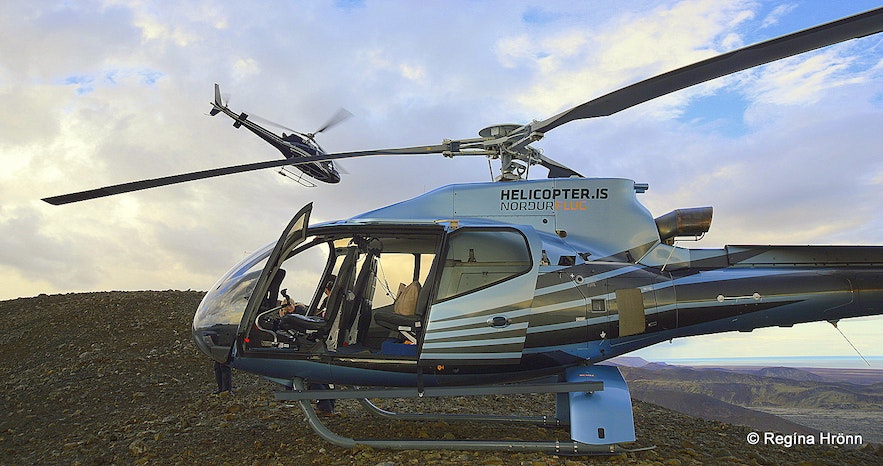 Landing on Mt. Stóri-Hrútur - the other helicopter took off shortly after we arrived

The helicopter landed on the mountain Stóri-Hrútur, which is on the opposite side of the lava field. Mt. Stóri-Hrútur is much higher up (352 m) than the hill where the hikers stood and we had a very different view of the area this high up.

We landed next to another helicopter, which must have been from Volcano Heli, but we booked with Norðurflug. I am happy for the helicopter companies that they are getting a lot of business after a long drought.

A new volcanic eruption starting - you can see the bubble appearing

When the second volcanic eruption started we could see the molten lava rising in the crater and a bright orange lava bubble appearing, which then got bigger and bigger until it exploded in a full-blown volcanic eruption with a loud roar from the volcano.

We could feel the heat from the molten lava rising up to our mountain. We were of course very well dressed as it can get cold in this area, but it got so warm that we were taking off our mittens and hats. 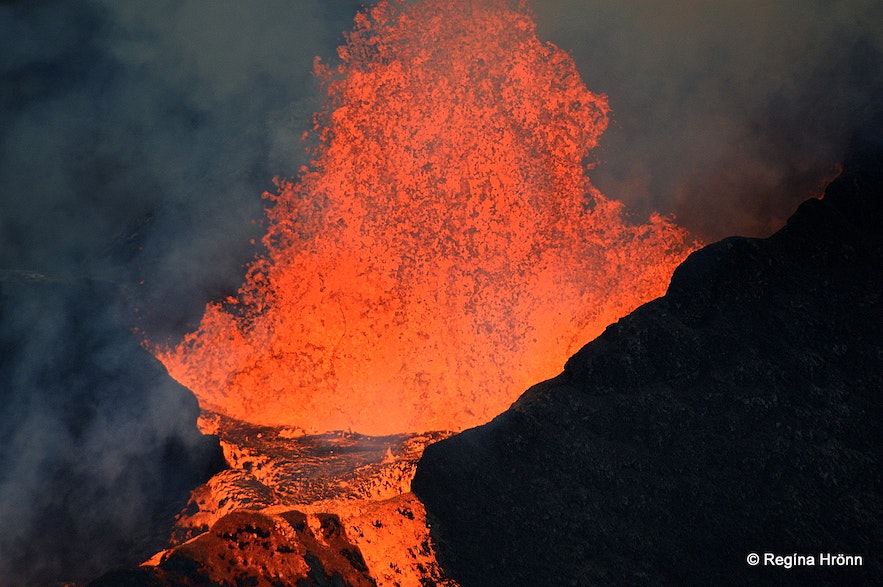 The volcanic eruption in full swing

We stood there in awe, wanting to take photos and videos to capture this magnificent sight and sound, but also wanting to be in the moment and taking it all in.

We knew that we only had a limited time on the mountain and I took a myriad of photos and 2 videos. The one below I put on Youtube. You can see how dark it was even though we have almost unlimited daylight in Iceland at this time of year.

I had never been close to a volcanic eruption before and it felt surreal, standing on top of a mountain watching a volcano at full throttle! It was magnificent, but also a bit eery as I am well aware of the dangers of volcanoes, having lived in Iceland my whole life. 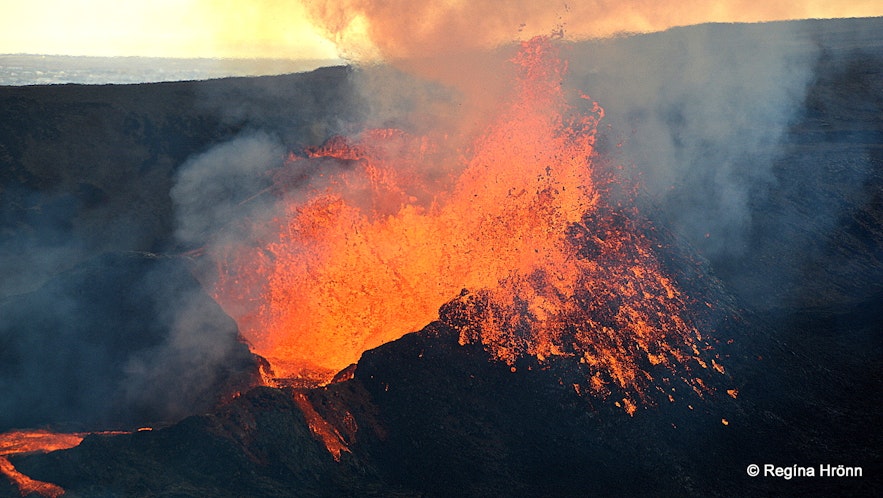 The helicopter ride lasts for 45-60 minutes, with 15 minutes on the mountain top. But seeing that we had to reschedule our flight the pilot was kind enough to give us half an hour on the site!

We were very grateful for the opportunity to see more volcanic eruptions and just take in the sight and sounds of the volcano.

"Thanks" to the dark cloud it was almost like we were taking photos at night, and the bright orange colour of the lava flow really stood out. 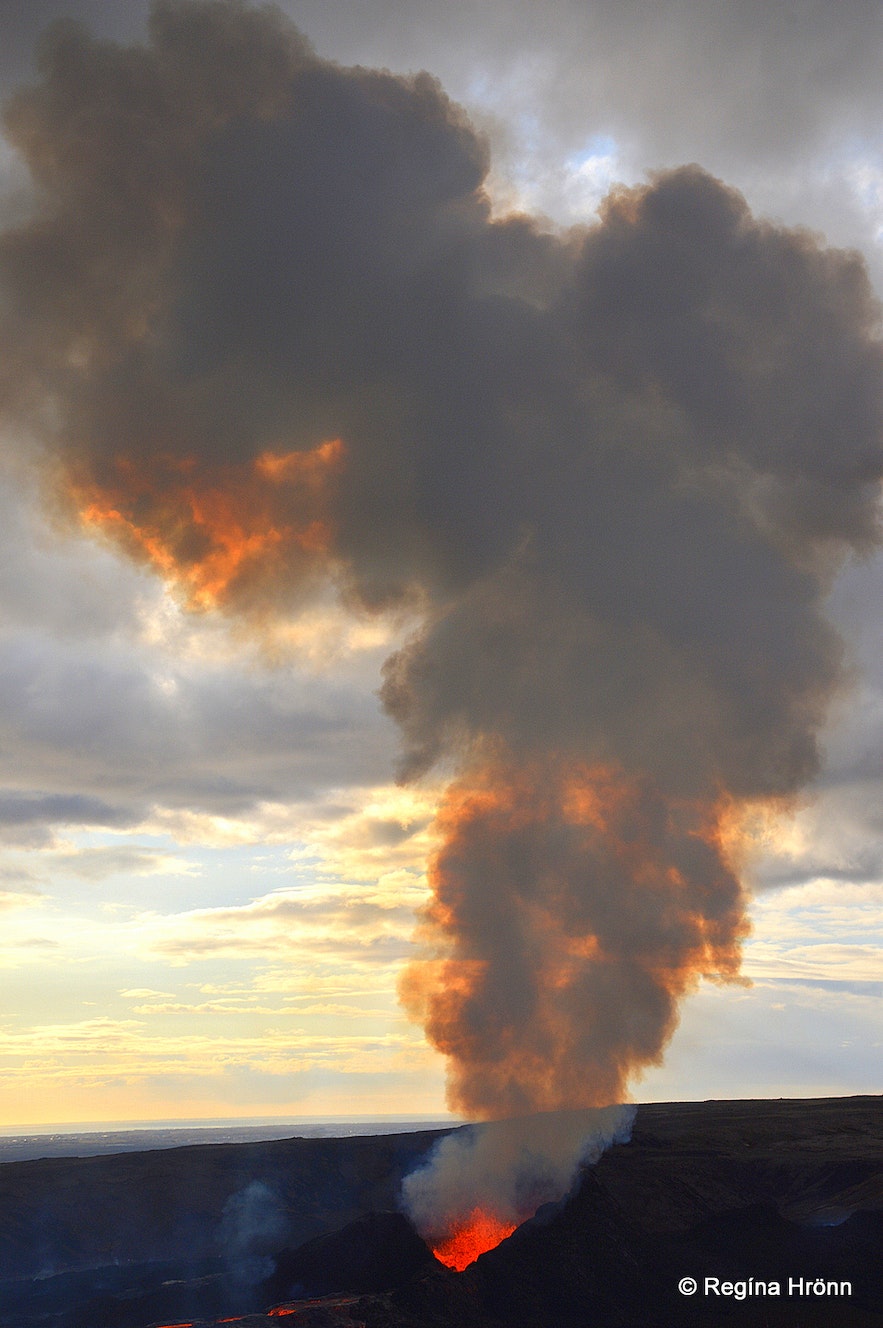 The smoke can be seen from Reykjavík

The smoke from the volcano rises so high up in the air that it can be seen from Reykjavík and we frequently watch it from our balcony. And the crater is getting bigger and bigger and parts of it can now also be seen from my city.

All of a sudden we noticed that our hair was standing on end, which means only one thing - we were getting affected by the static from the volcano!

If that happens while you are visiting the volcano, the meteorologists advise us to go lower or duck, as this means that lightning can appear. And here we were on top of a mountain standing next to a helicopter. So we got out of there fast. 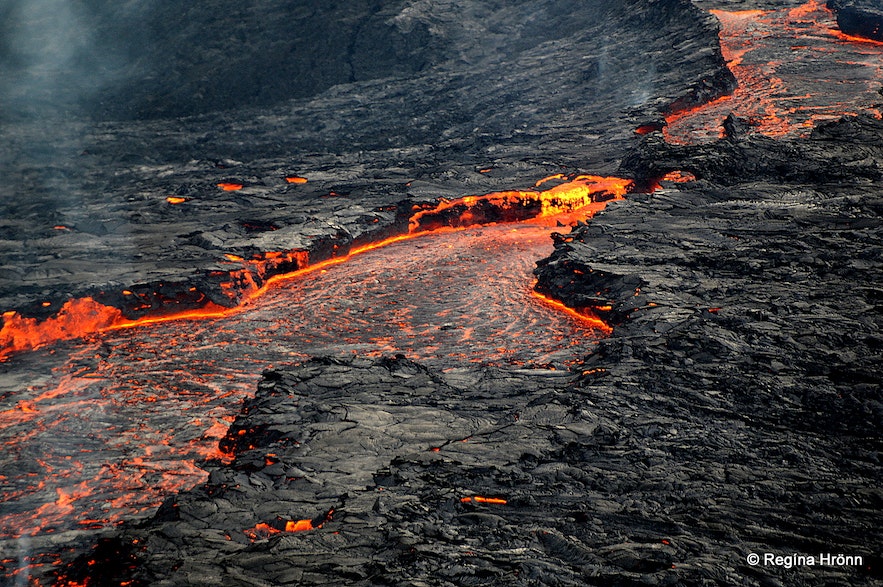 The lava flow from the volcanic eruption in Mt. Fagradalsfjall

I took a couple more photos from the helicopter as it was now our turn to sit in the front seats. The lava flow looked spectacular and it was extremely fast flowing. It has already filled up Geldingadalir and is flowing into Meradalir valleys and Nátthagi.

The amount of fast-flowing molten lava that is coming from the earth astounds me and the lava field is getting bigger and bigger. Where there were earlier grassy valleys there is no indication that there was even a valley there.

The hill on which people were standing in my photos has now been closed off.

See also my travel blog: Stöng - Ruins of a Real Viking Settlement Manor and the Reconstructed Saga-Age Farm in Iceland where I tell you about the 1104 volcanic eruption in Mt. Hekla and the Viking longhouses which got cot buried under layers of pumice. 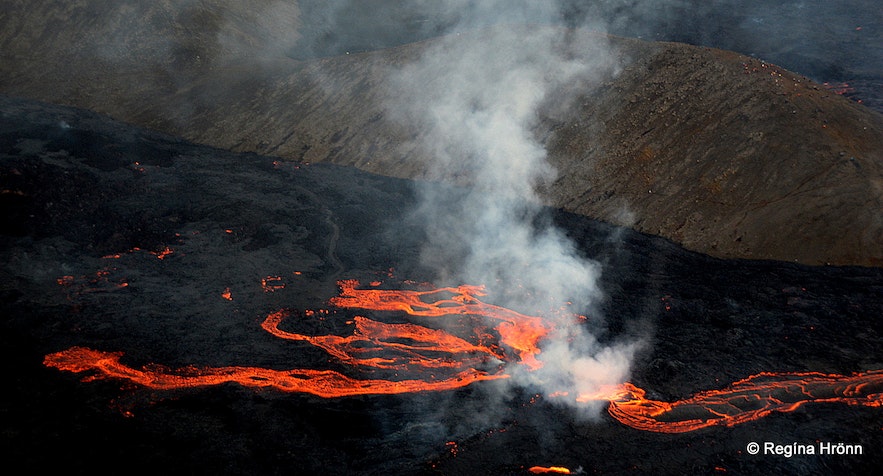 The lava flow looks beautiful from above

Barriers were put up to try and delay the lava flow from reaching Nátthagi and Suðurstrandarvegur road, where it seems to be heading, but the lava flow is so forceful that it broke down the barriers. We will see if other barriers can be put up closer to the road. Suðurstrandarvegur is one of 2 escape routes for the inhabitants of close by Grindavík town.

Seeing that there are centuries since a volcanic eruption took place on the Reykjanesskagi peninsula, then we don't know if it will stop soon or if the peninsula has just started to wake up, as it were. And then who knows where it will start erupting on the peninsula, so the roads have to be protected.

What a fantastic day this had been and I returned back feeling elated and filled with energy after witnessing the massive forces of nature at work :)