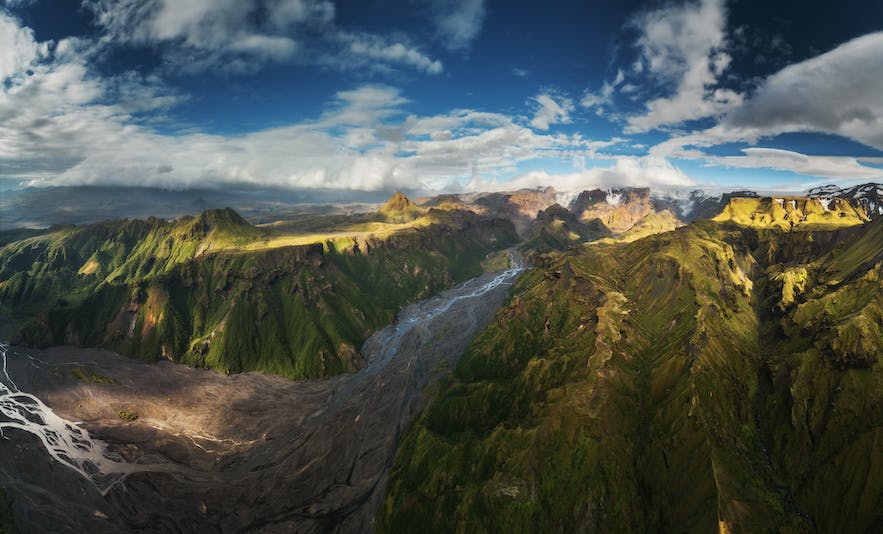 Stakkholtsgjá a canyon located in South Iceland that can be hiked through to reach a picturesque waterfall. It is renowned for its fairytale-esque beauty.

Stakkholtsgjá is approximately 100 metres deep and two kilometres long. Several small streams run through the canyon, and though it is relatively wide at its entrance, it narrows towards its end.

The gorge is within the Þórsmörk Nature Reserve in South Iceland, and visited on some tours to the area; even so, it is regarded as a hidden gem. Þórsmörk is better renowned for its widespread forests and the three glaciers that enclose it: Eyjafjallajökull, Mýrdalsjökull and Tindafjallajökull.

Þórsmörk is also famous for being one end of the world-renowned Laugavegur hiking trail, which connects it to Landmannalaugar through the Highlands. This is the most popular multi-day highland hike in the country, taking between four to six days to complete.

The hike through Stakkholtsgjá and back takes approximately an hour and a half. Though the trail is not paved, it is relatively flat and should be comfortable for most, including children.

The main concern on the hike is the fact that it is intersected by many streams; while they are shallow, the rocks beneath can be slippery. Visitors are recommended to bring sturdy sandals or waterproof boots to change into when fording. Care should also be taken around the waterfall, which is also very damp.

If travelling to Stakkholtsgjá outside of a guided tour, a four-wheel-drive is required. From Reykjavík, take the Ring Road travelling south to Route 249; the turn is located next to the famous South Coast waterfall of Seljalandsfoss.

This road will turn into the Highland trail, the F249, which is very bumpy and involves river crossings. The canyon can be found inside Þórsmörk.

Stakkholtsgjá is only accessible in summer.