Keldur Turf House in South Iceland is an ancient farm and homestead. It is thought to have been first built in the 11th century and rebuilt many times. It is one of Iceland's largest and oldest turf houses.

Keldur Turf House is a fantastic example of living history. It still functions and is open for tours throughout the day during the summer. While at the turf house, you can see how Icelandic settlers would have lived 800 years ago.

A History of Turf Houses

Turf houses, or sod houses as they're sometimes known, are an essential part of Icelandic history. Called torfbaeir in Icelandic, these houses are roofed with turf and built into hills. The front of the houses is made of wood or stone, with turf for insulation and roofing.

Norse settlers built turf houses as far back as the 9th century. While the early turf houses were large halls covered with sod, farmers and soldiers quickly adapted the technique to make smaller houses.

The turf was more available than wood and provided excellent insulation during the harsh winters. These homes blended in with the landscape and continued to grow grass and feed cattle.

Keldur Turf House is the oldest fully standing turf house in Iceland. It consists of almost 20 turf structures, with a large white cottage as the main hall and a church. 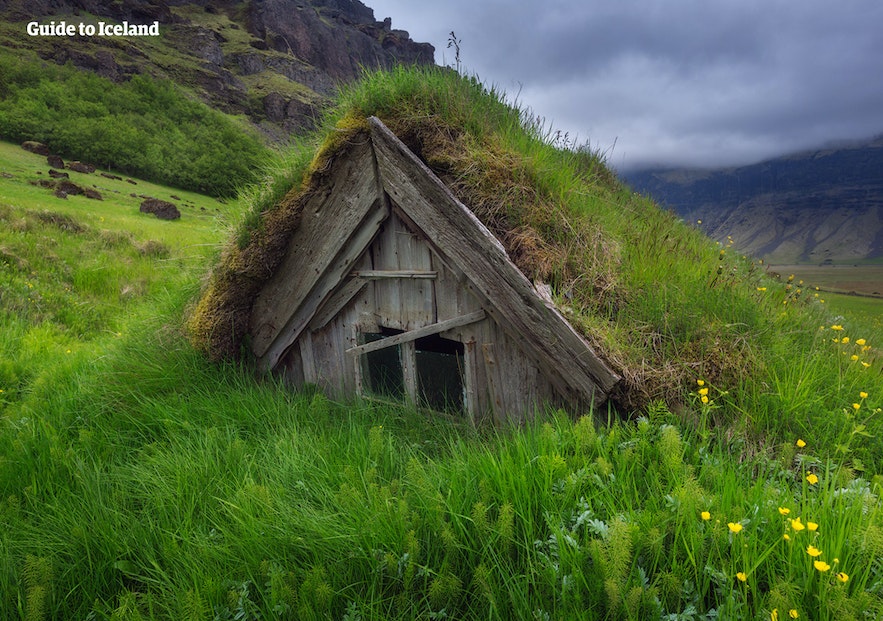 This house originally belonged to a farm and had a farming cottage as the main building. It juts up out of the ground and has multiple smaller buildings behind it. The angled doors and windows are the only parts of the house not covered by grass.

Over the years, other buildings have been added to the farm, including a church built by constable Gudmundur Brynjolfsson in the late 19th century.

All the smaller houses in the Keldur turf homestead connect under the grass, leading to multiple smaller rooms. While the original residents likely spent most of their time in the larger cabin, the smaller rooms could be bedrooms, storage, and even stables in the winter.

One of the most exciting discoveries at Keldur is the underpass, one of the oldest surviving structures in the country. It is believed to have been used as an escape route during the Sturlung Age.

Keldur turf house is in South Iceland, between the villages of Hella and Hvolsvollur. It is 11 miles (18.3 kilometers) away from Hella and is a short detour from the Ring Road.

The Keldur turf house is a government-sanctioned protected historical zone. It can't be updated, as it's an essential part of the history of Iceland.

The official opening hours of the homestead are 10:00 to 17:00. Two tours are offered daily at 11:00 and 15:00. Visitors can explore the main hall of the Keldur turf house and the grounds.

The staff here are knowledgeable historical experts who can answer any turf house questions.

Getting to Keldur turf house

If you are staying in Hella, getting to Keldur turf house is easy. It is right outside the town and is well signposted.

Take route one south of town and turn on Route 264. After a few kilometers, you'll see the signs for Keldur turf house tours. There is parking available on site.

If driving from Reykjavik, you'll need to take Route One. This route should lead you through several of the major cities on the southern coast, including Hveragerdi and Selfoss. Once you are in Hella, follow the directions above.

Things to do nearby

Hella, the nearest town to Keldur turf house is well worth a visit. You can visit the Hekla Center, Icelandic Horse World, and the Sagnagardur Visitor Center. You'll be able to eat, ride horses, and learn about the culture.

Hekla, one of Iceland's most active volcanoes, is also nearby. At around 4,882 feet (1,488 meters) above sea level, Hekla has erupted over 20 times since 874. The hiking trail here leads almost to the summit and will take around 3-4 hours to walk.

The Westman Islands, or Vestmannaeyjar as they're also known, aren't far from Keldur. Visit one of the museums here or take a tour to learn about the islands' volcanic past.