Svodufoss waterfall, spelled as Svöðufoss in Icelandic, is located in the amazing Snaefellsnes Peninsula and is one of the most photogenic waterfalls in Iceland.

Svodufoss' scenic setting and accessibility are what make the place charming. This picturesque waterfall is set in front of the Snaefellsjokull glacier, and on clear days, you can get impressive views of the two together. Also, it's an easy walk to the top of the waterfall, where you can get an entirely different perspective of it and its surroundings.

Svodufoss waterfall tumbles 32 feet (10 meters) down an imposing basalt column cliff before finally joining the Laxa river, also known as Holmkelsa. This beautiful Icelandic waterfall is broad and has water all year-round due to its proximity to the Snaefellsjokull glacier.

A parking lot near the waterfall allows travelers to visit and enjoy it easily.

The waterfall looks impressive all the time, whether you choose to visit in the summer or winter. However, the best days to see it are during sunny days, when the clouds are clear, and the glacier caps of Snaefellsjokull are in full view.

Moreover, if you want more time to enjoy the feature, then visit during summer, when you have longer days to marvel at it due to the midnight sun.

Snaefellsjokull glacier, standing behind the waterfall, creates an interesting contrast. Side by side, the two live up to the name "the land of ice and fire," with the waterfall's volcanic basalt and the glaciers of Snaefellsjokull.

Snaefellsjokull is the perfect background to the waterfall, allowing for a perfect image. However, visitors can also walk to the top of the waterfall to see a different but still fantastic view of the waterfall's fast-running waters.

Ultimately, the Svodufoss waterfall is a beautiful place you should visit on your trip to the Snaefellsness Peninsula.

Svodufoss has been around for centuries but is a hidden wonder due to its inaccessibility. In fact, it's only in recent years that visitors have started noticing it. Fortunately, a parking lot that's been recently constructed near the waterfall, allowing visitors to visit the attraction easily.

How to Get to Svodufoss Waterfall

Thanks to the parking lot near Svodufoss waterfall, it's now possible to access it easily.

Travelers from Reykjavik can rent a car and drive 125 miles (200 kilometers) north. They can start by driving north at Road 1 before turning left at Road 54 and Road 574. Since the whole drive can take almost three hours, travelers can take a rest and stop at the town of Olafsvik before continuing their journey.

Olafsvik town is 3.7 miles (5.9 kilometers) away from the Svodufoss waterfall. From Olafsvik, drive to its northwestern part and take the Ennisbraut road out of town before turning left onto Utnesvegur. Once you've reached Utnesvegur, drive around 1.3 miles (2.2 kilometers) before reaching an unnamed dirt road, and then turn left.

Drive around 0.8 miles (1.4 kilometers) and follow the dirt road until you see a sign denoting the turn-off for Svodufoss waterfall's parking lot. From the parking lot, visitors can go on a half an hour hike to the waterfall.

Impressive spray, a clean drop, and its close proximity to the Snaefellsjokull glacier make this waterfall a photographer's dream. Visitors can bring their cameras to revisit the waterfall's view, although they are not required to fully enjoy Svodufoss' beauty.

Nearby Attractions in West Iceland and the Snaefellsnes Peninsula 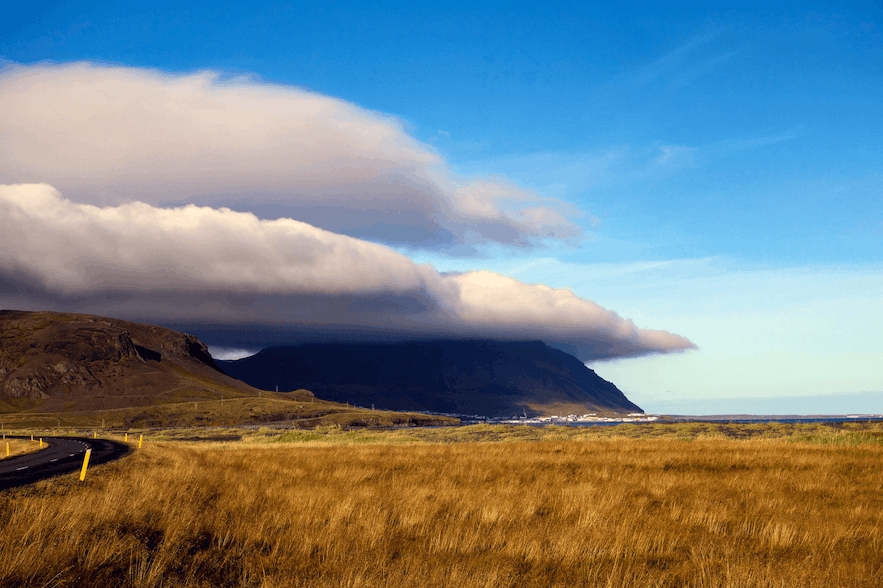 Svodufoss is located in Snaefellsnes Peninsula, also known as Iceland in miniature. Thus, travelers can expect many beautiful and unique attractions around it.

Near Svordufoss, less than a mile away to its east, is the Kerlingarfoss waterfall. Kerlingarfoss is not as large as Svodufoss, but is still spectacular.

A main attraction of Snaefellsnes, Snaefellsjokull, is around 12 miles (19 kilometers) south of Svodufoss.

Saxholl, an extinct volcanic crater, is located southwest of Svodufoss, 11.7 miles (18.8 kilometers) away. The crater now lays dormant and is accessible by hiking. Hikers who get to its top are treated to stunning views of the lava fields and the Atlantic Ocean.

Three towns are nearest Svodufoss, Hellissandur, Olafsvik, and Rif, which are all part of the Snaefellsbaer municipality. Olafsvik, a small fishing village, has its own museum, camping grounds, and Sundlaug Olafsvik indoor pools. Meanwhile, Hellissandur, which is located beside the Snaefellsjokull National Park, has a small maritime museum.

The towns surrounding the waterfall also have various accommodations and restaurants, allowing travelers multiple options to relax and replenish.