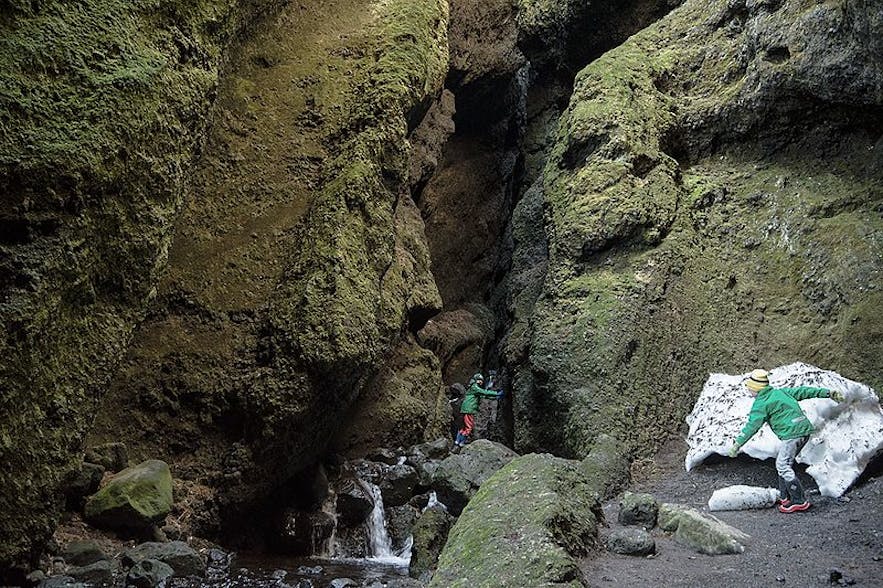 Rauðfeldsgjá, which translates to Red-Cloak Rift, is a beautiful gorge in Botnsfjall Mountain on the Snæfellsnes Peninsula. In the summer, it is possible to walk up to and climb inside it.

Visit it on a tour of the Snaefellsnes Peninsula, or take your time to enjoy the area while on a self drive tour of the island.

Rauðfelsdsgjá is easy to reach from Reykjavík, although about two and a half hour’s drive away. To get there, drive north along Route 1 to Route 54; follow this road along the southern coastline of the Snæfellsnes Peninsula, and continue onto Útnesvegur towards Snæfellsjökull glacier. Just shy of the national park, you’ll find the gorge.

There is a carpark by Rauðfelsdsgjá, just a short walk away from the narrow opening. You can follow a path up to it, and walk in along a narrow path along a stream.

A little bit of clambering will get you to a small waterfall. Any who wish to climb in further than this will need to be reasonably fit, equipped with waterproof clothing and sturdy shoes, and willing to get pretty wet. This route should not be attempted if the ground is icy.

Rauðfelsdsgjá is mentioned in a saga called Bárðar Saga Snæfellsáss, which was written in the 14th Century about events half a millennium before. The first part of the saga follows the half-giant Bárðar, who upon death later became the guardian spirit of the Snæfellsnes Peninsula.

It was said that his daughters would play with the local boys. One of these boys pushed one of his daughters out to sea on an iceberg, where she drifted all the way to Greenland. Here, she found a lover, but Barður, thinking she was dead, punished this boy and his brother by throwing them into Rauðfelsdsgjá gorge.

Rauðfelsdsgjá is located near the edge of the Snæfellsnes Peninsula, putting it right by Snæfellsjökull glacier and National Park. Within this park are sites such as the Lóndrangar sea stacks and the Djúpalónssandur beach.

Before reaching Rauðfelsdsgjá, you will pass features such as the Gerðuberg hexagonal basalt cliffs and the Ytri Tunga seal watching beach. Continuing around the peninsula clockwise, you’ll come to natural sites such as Kirkjufell mountain and Kirkjufellsfoss waterfall and cultural sites such as Barnahöfn with its shark museum and the old fishing village of Stykkishólmur.