An Afternoon in Keflavik 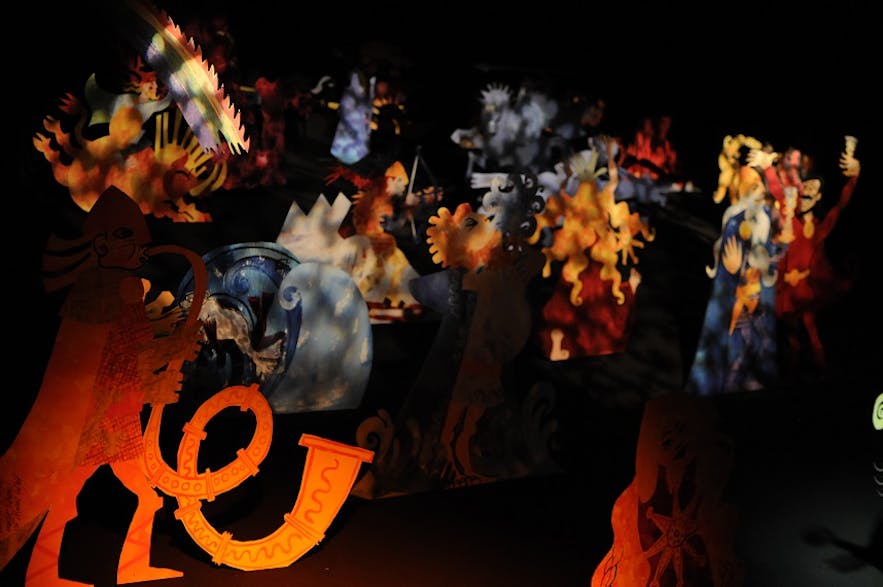 My guess is that all of you guys know where Keflavik is right? I mean. Except a couple crazies (like me) no-one takes the boat to get to Iceland so you probably have been, or will come to Keflavik at some point.

The problem is that most of the time, the only thing people do in Keflavik is entering or leaving Iceland and that’s a bloody shame! Seriously, there is much to do in Keflavik; there even are things you cannot see anywhere else in Iceland.

I recently had the opportunity to spend an afternoon in the city and I had such a blast actually that I knew I had to promote the place a little bit, so if by any chances you end up with a couple hours of free time at the end of your journey, please consider stopping by Keflavik! 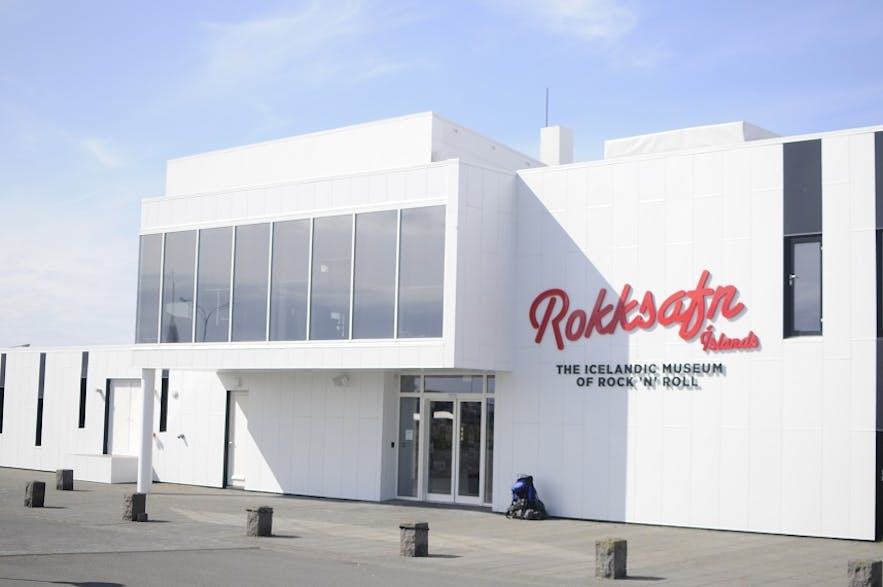 The main place I wanted to visit in Keflavik was the Icelandic Museum of Rock and Roll! I guess many may not know that but despite its diminutive size, Iceland has a quite the lively music scene! The museum, despite its name, is not centered solely on Rock and actually tells the story of the evolution of Icelandic popular music, all the way from the twenties until the present day (I’m not joking, the last panel in the museum is about musical events from 2013.) 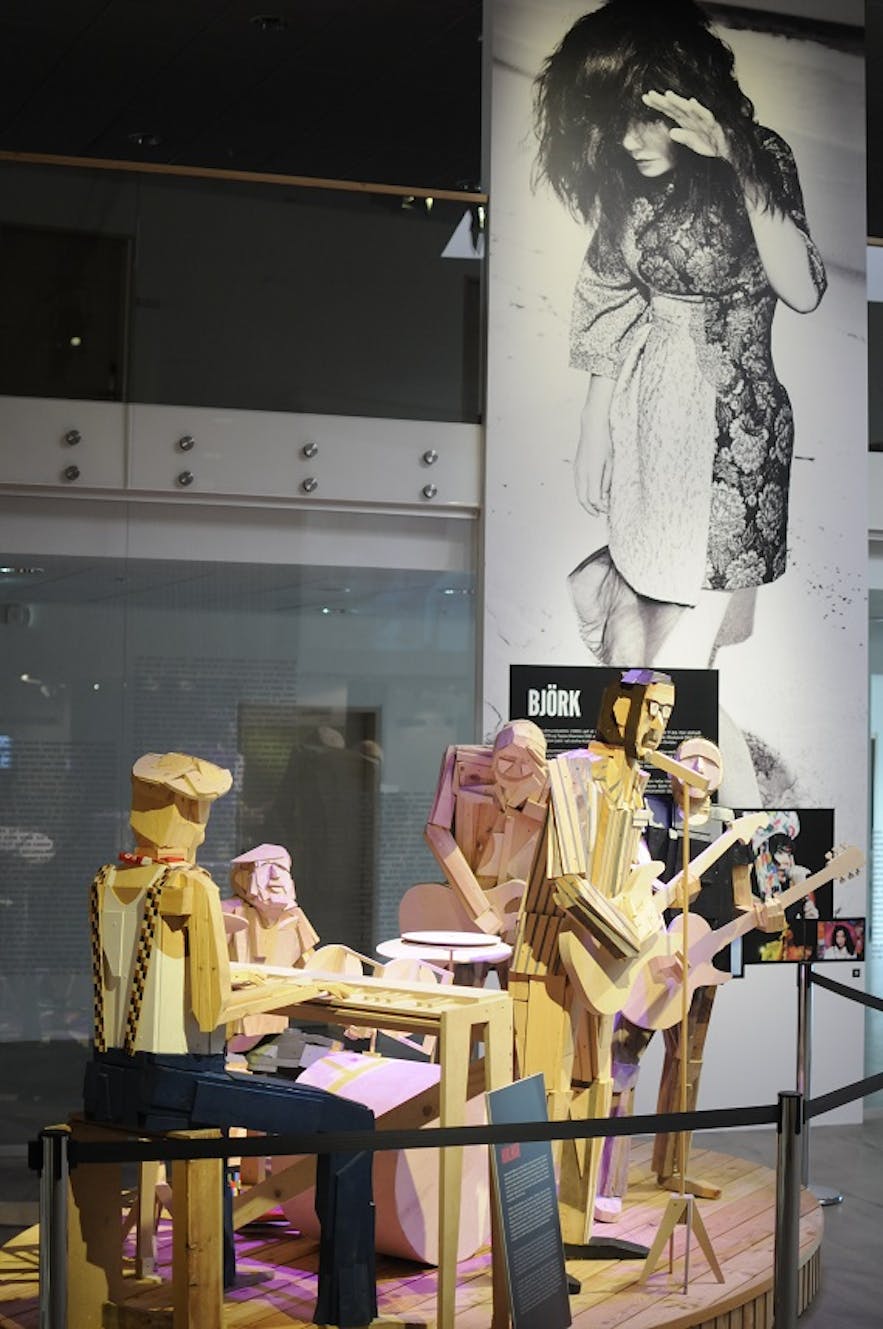 The museum is a perfect mix of informative signs that link neatly individual story lines with the greater forces at play, with film projections, old artifacts and even actual instruments on display for everyone to play! The setup is great too, with various sculptures, prints and projections. I particularly liked the fact that the speakers played tracks by current Icelandic artists. By asking the good spirited staff I could finally put a name on a couple songs I had heard on the radio! I also enjoyed the little cinema where various documentaries are screened. I got the end of Screaming in Silence, a great movie about the uniqueness of the Icelandic musical scene, I totally recommend it!

All in all, I spent a great time in the museum. The best part was that there weren’t that many people so I could take the time to get more acquainted with the life of Early eighties Icelandic Punks (among others). Note that the museum occupies parts of a building which also houses Keflavik music school. As a matter of fact, it was there (thanks to the American base) that the whole Rock fad started in Iceland and still today a great number of successful Icelandic bands like Hjaltalin for example call Keflavik their home.

So, the Icelandic Museum of Rock and Roll was great! But what’s better than a museum? Two Museums! That’s right, the second museum that you OUGHT to see in Keflavik is not that far, and the best thing is that you can take the bus for free within the town limits so you don’t have any excuses not to go there. The museum I am talking about is of course “Viking World” or rather “Vikingaheimar” which gives you a surprisingly complete introduction to Viking Age Iceland. First there is the Longship Íslendingur which is a modern day reconstitution which sailed from Iceland to North America fourteen years ago to commemorate the voyages of Leif Erikson. 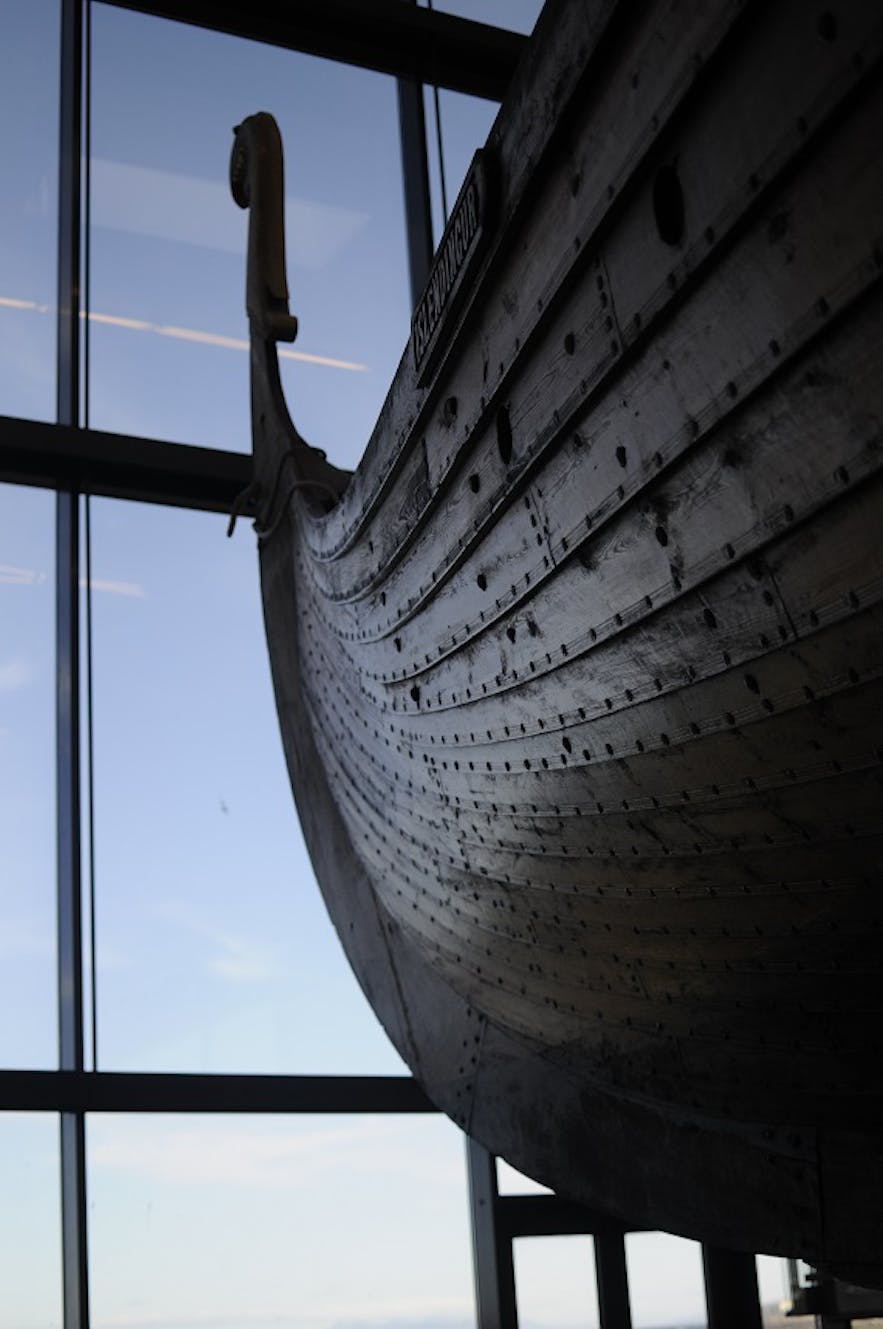 The ship is basically huge. It’s over twenty meters long, with its full mast and rigging. You can actually get on the ship itself and try to imagine how it must have felt sailing on such boats for weeks in search of land. In addition to the ship itself, numerous items and information signs are spread on the ground floor. Some dealing with the Icelander’s journey to the Americas while others are more locally sourced. You can for example see Iceland’s only Viking Age grindstone as well as this rather neat runic inscription: 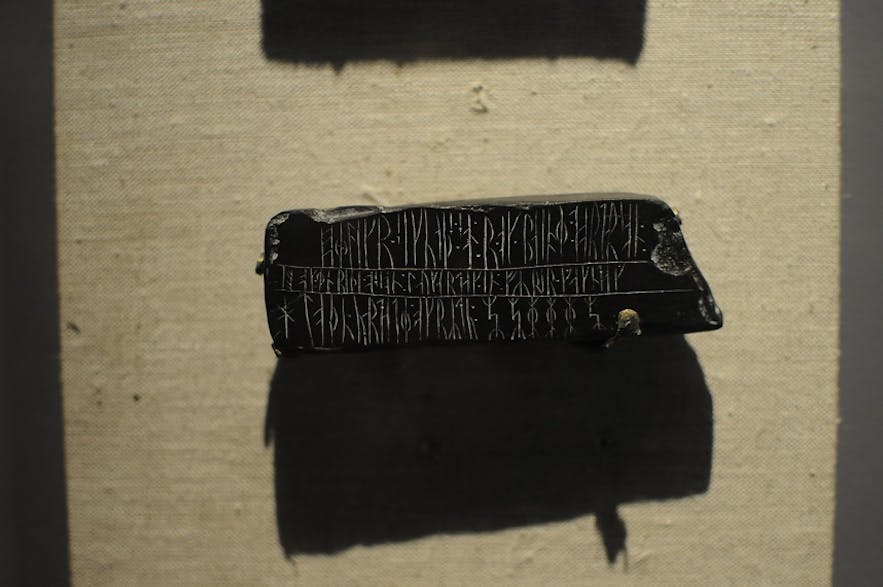 On the second floor, there’s another exhibit that you can enjoy through an audio-guide. The tour is actually about Norse mythology and Religion. Considering that I am doing my Master on this very topic I could not help checking it out and overall, it’s a great experience! Each room is adorned with painted papier-mâché figures illustrating some characters or events taken from the Old Viking Religion. The effect is really impressive and the style in which those figures are portrayed fits perfectly with the thematic. 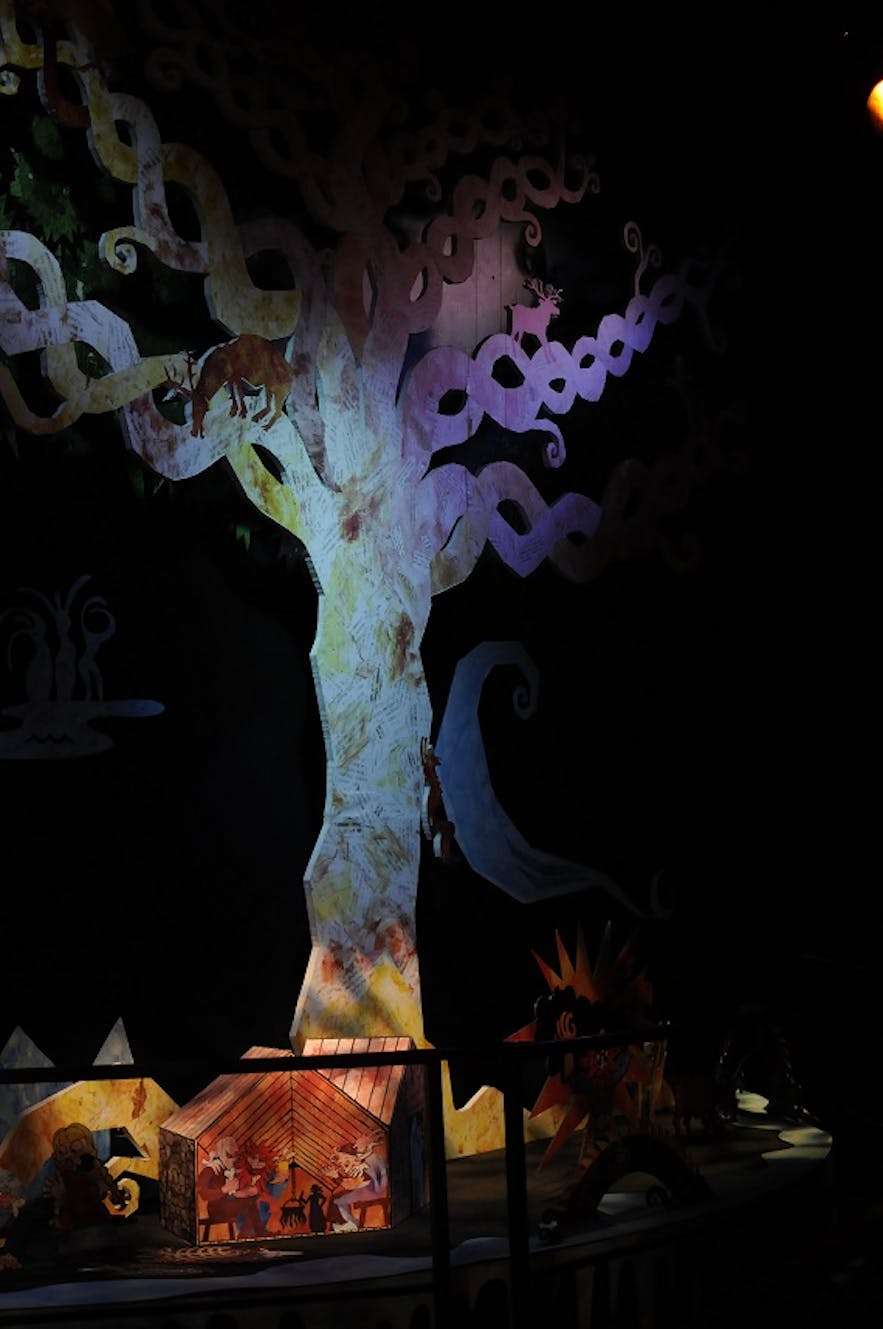 On a more factual note, the information given in the tour was quite correct but did probably oversimplify a little bit. I know it’s hard to present such complex things such as Pre-christian worldview and heathen rituals in an engaging way but I felt that presenting the Old Viking Religion as unmovable mythological bloc might be a bit off taken how much variation it was characterized by. Still, for an exhibition tailored for a wider-audience, it was pretty good. 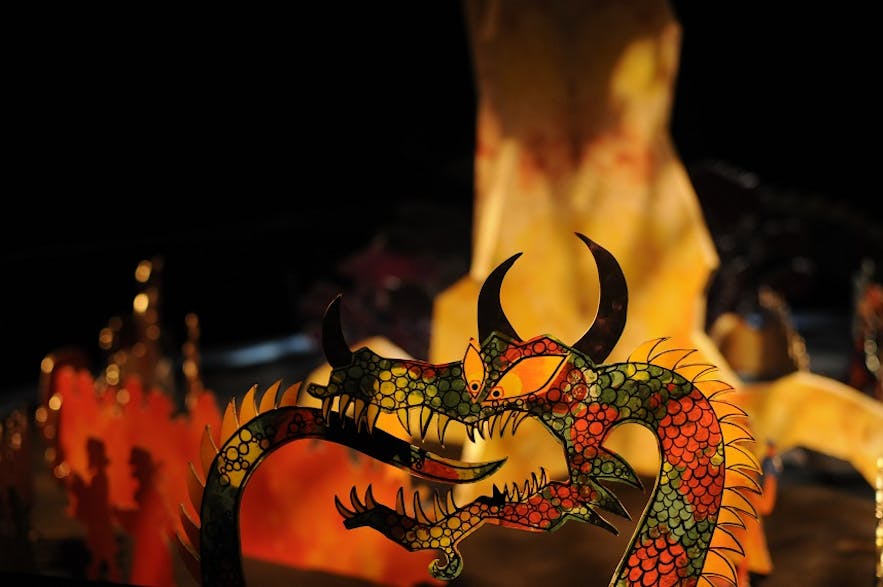 Despite being already quite awesome, the museum has even more to offer. Just a couple yards outside its doors lays an old heritage farm, complete with original, 100-year old turd houses, but even better, Viking animals! By Viking animals, I don’t mean plundering fluff-balls on a long-ship but rather old-race animals similar to those that were around in Viking Age Iceland. 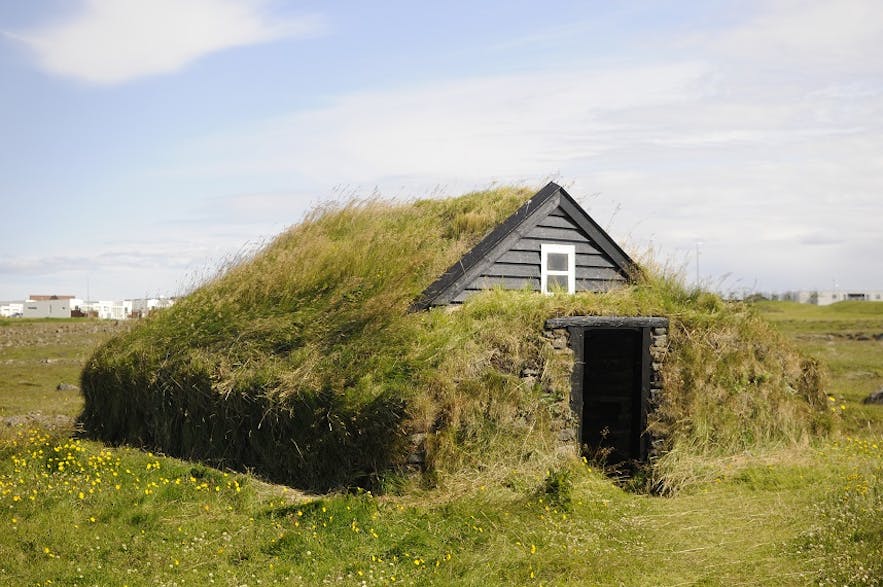 The conservation of old-races animals is a tricky endeavor. The big agro-industrial companies tend to focus on single highly productive races and those become more and more dominant and the less productive or convenient ones see their number dwindle as the multinationals grow so it’s really cool to see that preservation efforts are made all the up to Iceland!

Present on the site were numerous goats: 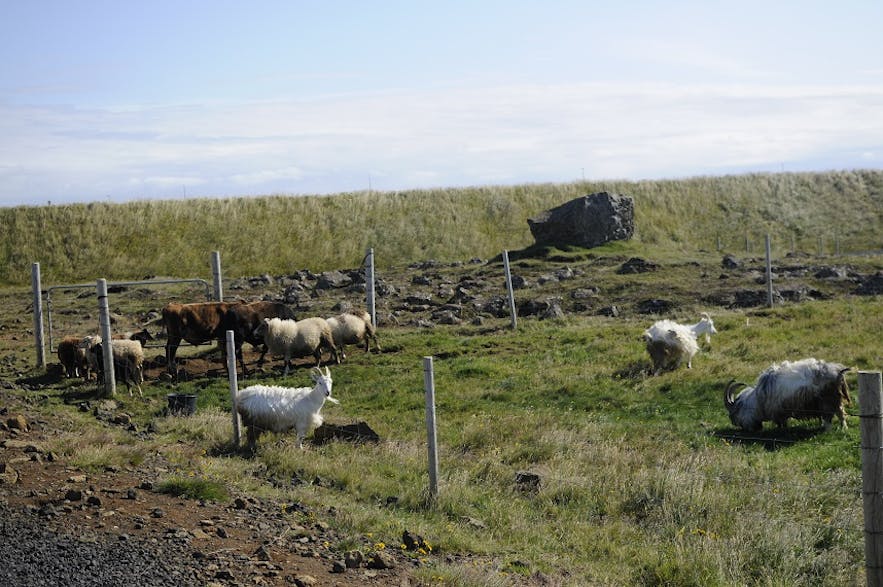 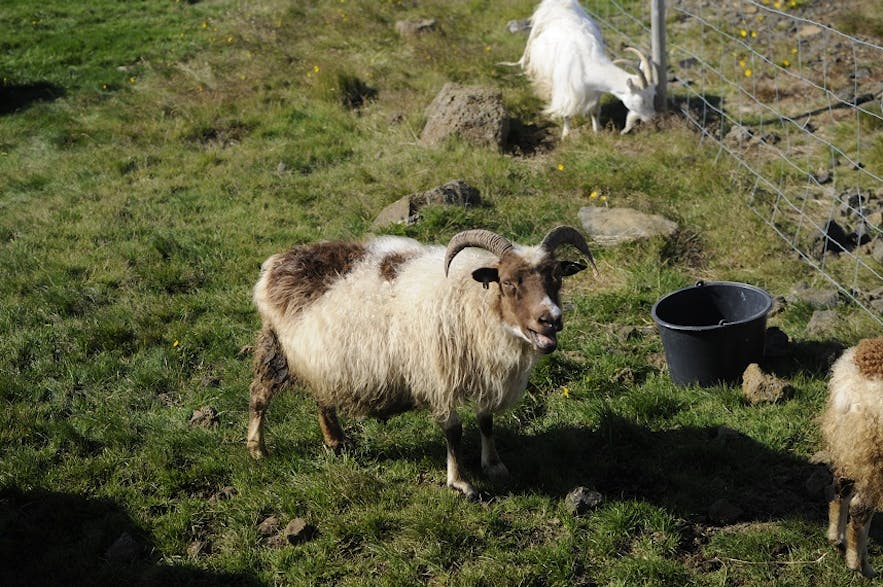 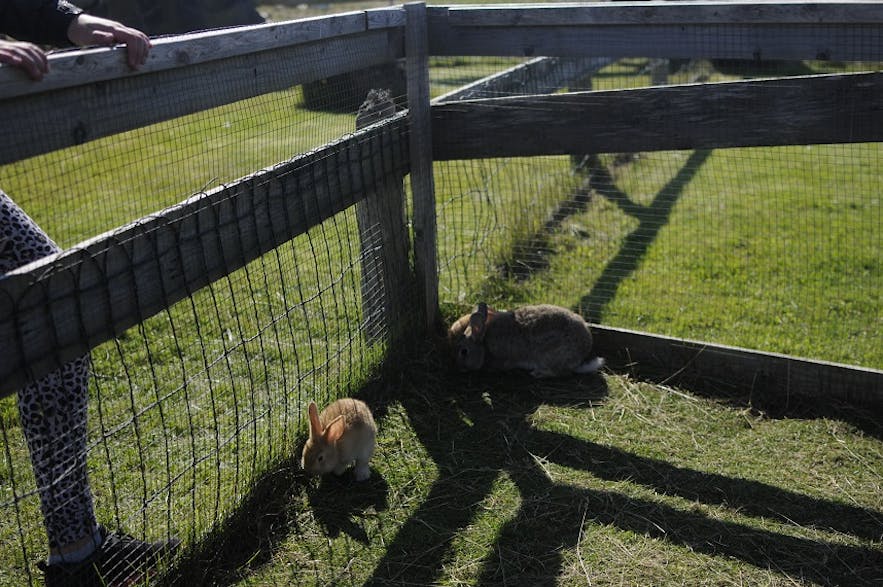 And a cute Duck couple (I called them Donald and Daisy!): 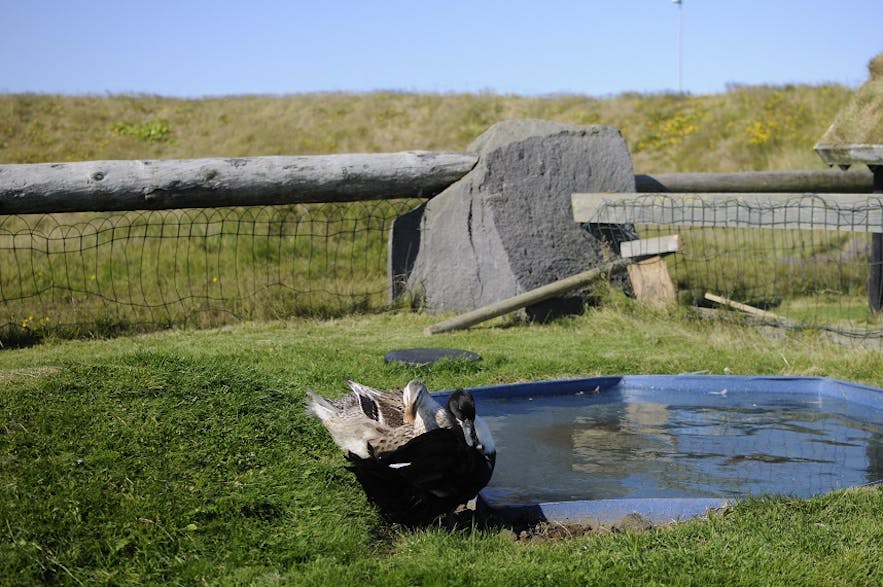 Seeing all that fluff around was, I think, the best way to end the day and I left the scene shortly afterwards. The best thing being in Keflavik, in addition to all the great sights of course, was that I was able to take the regular bus to Reykjavik. Not the shuttle bus, but a cheaper, and much less crowded one! You guys should do the same when you come up here, there’s much to see and to do outside the capital so why not starting with the most obvious: discovering the place where you sat foot on beautiful Iceland for the first time? Try and you won’t regret it!