Þingvellir National Park - Where You Walk Between Two Continents 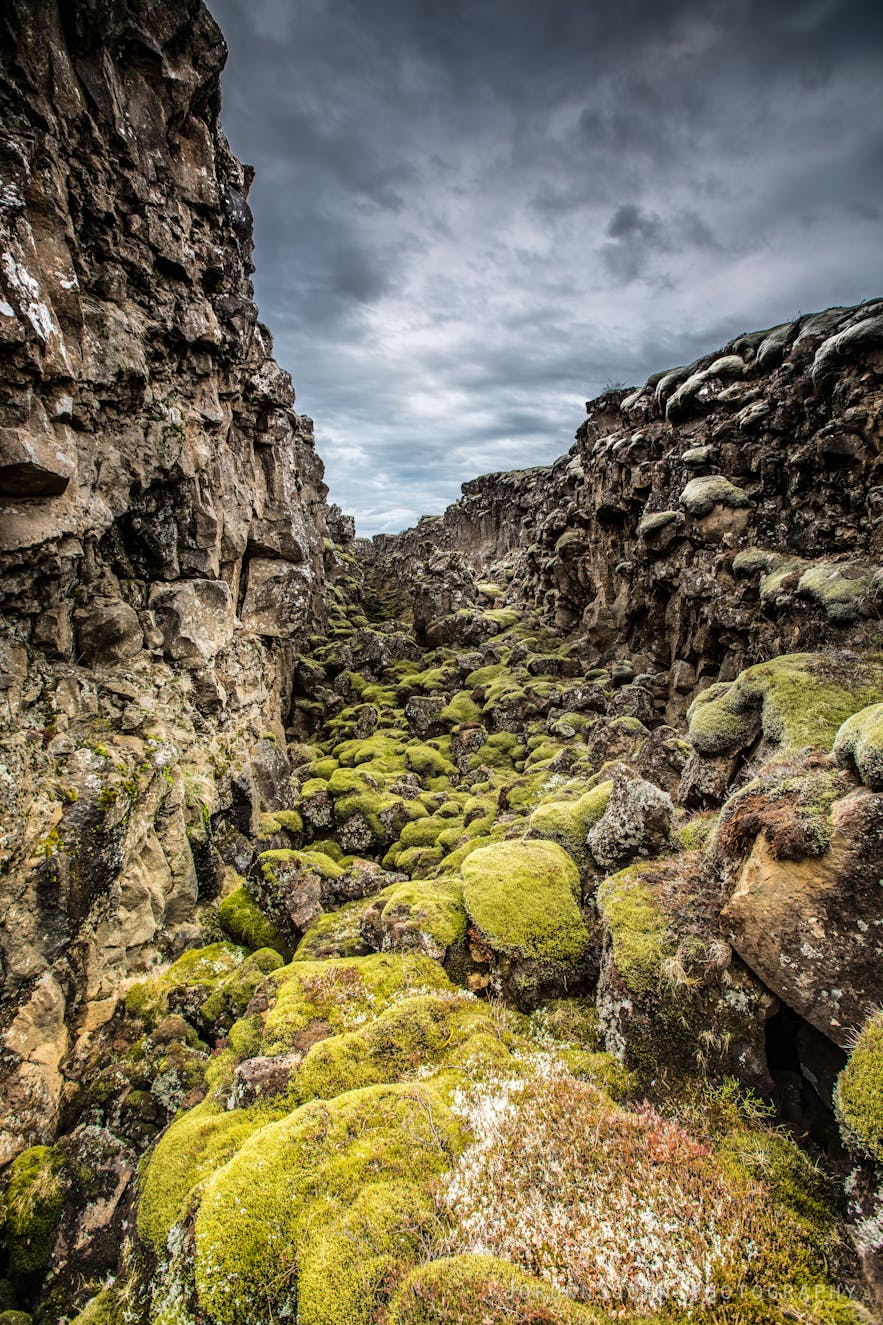 Most visitors to Iceland will, at some point, take the Golden Circle, the most popular tourist route in the country. Images from its three destinations adorn postcards and websites, to the extent that many know what to expect from the tour before they even arrive. The iconic Gullfoss waterfall is famed for its scale and beauty; the Geysir Geothermal Area is home to the rare and spectacular phenomenon of, as the name suggests, geysers; but what about Þingvellir warrants it a place on the list?

The answer to this is multi-faceted. Þingvellir is a place where Iceland’s stark geological processes are playing out right in front of you; it is where the history of the nation truly began and where almost all its major historical turns were made; and, quite simply, it is a beautiful site with a wealth of things to do. No matter your interests, you are sure to find something here that fascinates you.

Continue reading to learn about the history, geology, and modern-day appeal of Þingvellir. 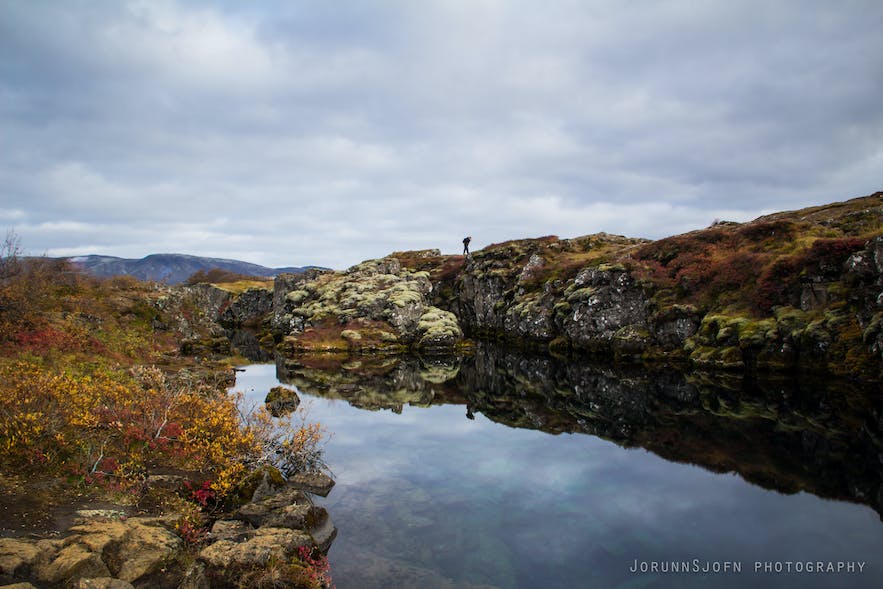 Iceland’s settlement by the Norse started with the arrival of Ingólfur Arnarson in 874, and for the next 56 years, the era was called ‘The Settlement Period’. Driven away from a newly united Norway under King Harald Fairhair, many communities from many different clans started to spring up all around the island’s shores.

This, however, was quite an unsustainable situation. The arrivals largely shared an ancestral home, religion and language, but otherwise had their own leaders and customs. Violence between groups, therefore, was commonplace, as people fought for their beliefs and for the limited resources their new island had to offer.

District assemblies began to form, but the majority of the power in the island was concentrated in the south-west, around Reykjavík, in the hands of the descendants of Ingólfur. The settlers spread around the rest of the country resented this, thus pushed for a general assembly to establish how they could all live together harmoniously. 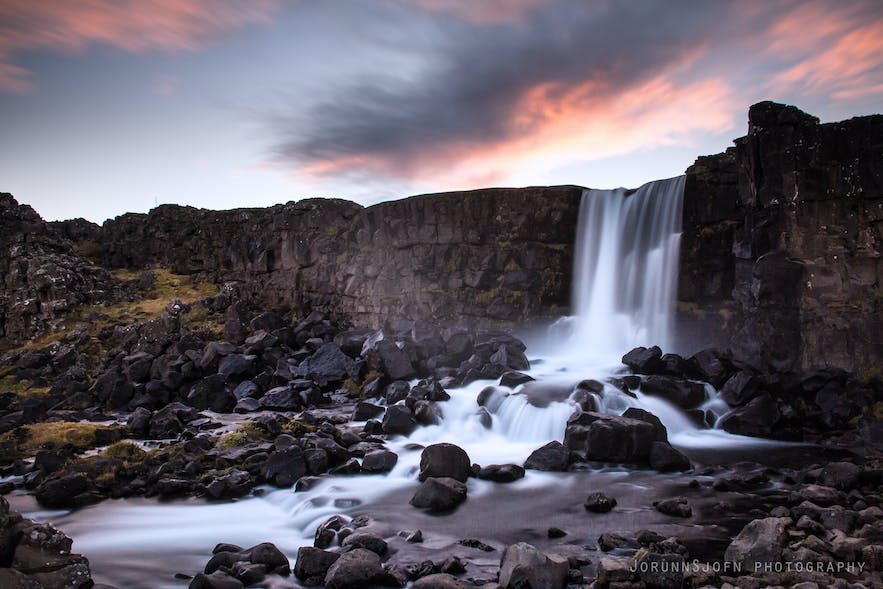 A man called Grímur Geitskör was given the tasks of gathering representatives from each clan and finding a suitable meeting location. As is often the case with Norse history, this became a reality through rather grim means. Just as Geitskör was searching, the man who owned a sheltered piece of land accessible from all corners of the country was convicted of murder, and his property turned public.

This location would become Þingvellir. While still clearly more convenient to reach for the wealthy individuals of the south-west, it took no more than seventeen days of travelling from the furthest reaches of the east, so it was settled upon as the assembly’s site. In 930 AD, over thirty ruling chiefs met for the first time to discuss law on the island and to create a commonwealth.

In hindsight, we can see that what these early Icelanders did was create a crude version of a modern-day representative parliament in response to absolute monarchy, about 800 years before such ideas came into play in the USA and France. 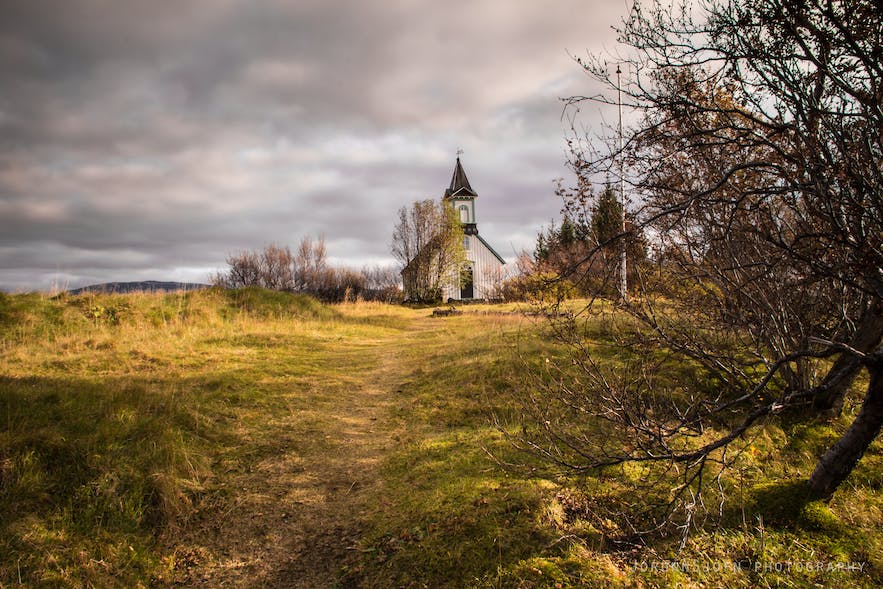 The meeting was such a success that the chiefs returned each following year. The institution, called the Alþingi, developed to be a place where disputes were settled, where distant relations could share their annual news, and where criminals were tried and punished. No one person ruled the entire parliament; the de facto head was the Law Speaker, but he was simply the institution’s mouthpiece with only ceremonial powers. Instead, decisions were made collectively.

It was at Þingvellir - which translates directly to ‘the fields of parliament’ - where most of the major turns in Iceland’s history then started to occur. For example, it was here that the nation abandoned Asatru, the Old Norse pagan belief system, in lieu of Christianity in 1000 AD, due to the threat of Norwegian invasion. Nearly a millennium later, in 1944 AD, it is where Icelanders declared their independence from Denmark and confirmed their first President.

The Althingi has existed nearly constantly since its inception; it functioned even throughout the Icelandic Civil War in the 13th Century. The only time it did not operate was between 1799 to 1844 due to Danish colonialism. When it returned, it was the same institution under the same name; only it was restored in Reykjavík, where it continues today. This makes Þingvellir the original site of the world’s longest running, still ongoing parliament. 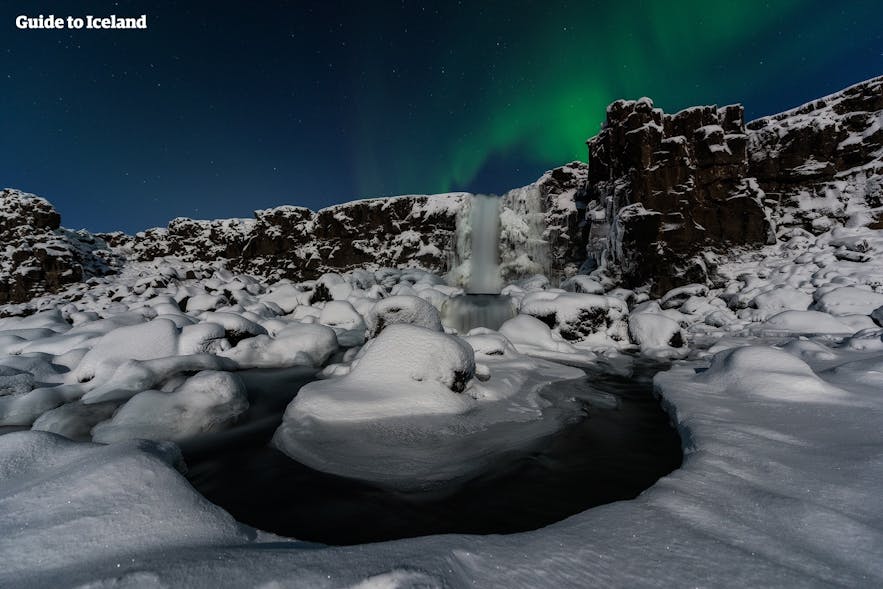 Because of its history, Þingvellir became a National Park in 1930, a millennium after the Alþingi’s establishment. In 2004, it was accepted as part of the UNESCO World Heritage List.

The annual meetings at Þingvellir were very ad hoc, with people from around the country only building temporary shelters and dismantling them once the meeting had convened. Therefore, there is little evidence on the site that it ever had such historical significance. Those with a keen eye, however, may still see old foundations lying around, some of which have submerged underwater as the valley has sunk.

Why the valley is sinking, however, is another major part of Þingvellir's appeal.

See here for more information about the history of Iceland 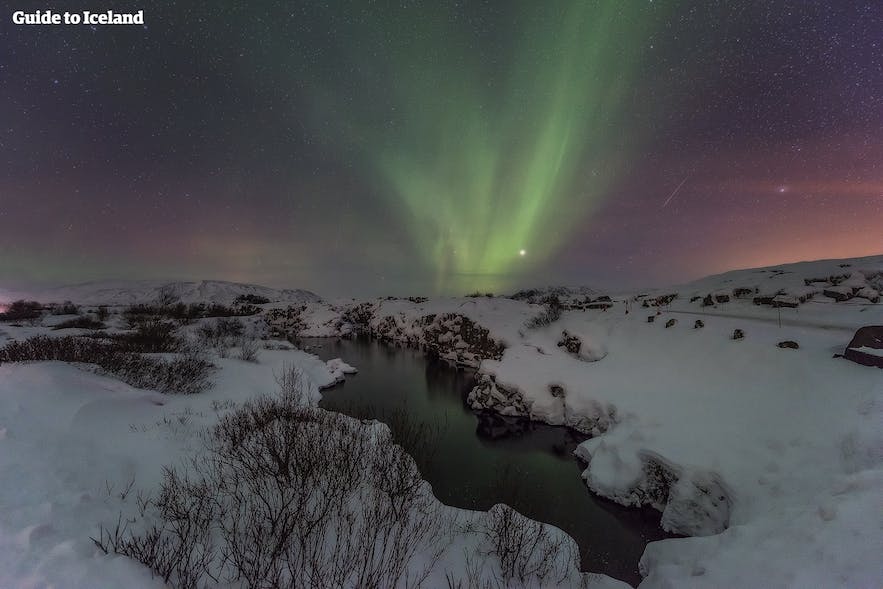 Þingvellir’s cultural and historical heritage are what draw many over to it, but it’s geological traits are quite as fascinating.

Iceland is divided by the Mid-Atlantic Rift; some parts of it, such as the Westfjords and Reyjavík, are on the North American tectonic plate, while others, such as Vatnajökull glacier and the East Fjords, are on the Eurasian plate. Iceland is the only place in the world where this rift is above sea-level, and nowhere can you see the edges of both plates as clearly as in Þingvellir.

As you enter the park from Reykjavík, you descend a steep cliff into a valley. Looking upon the face of this cliff is to literally look at the edge of North America. If you drive through the park, you will ascend on the other side adjacent to another wall; this is Eurasia. The valley in between, in which Þingvellir is contained, is the rift valley. 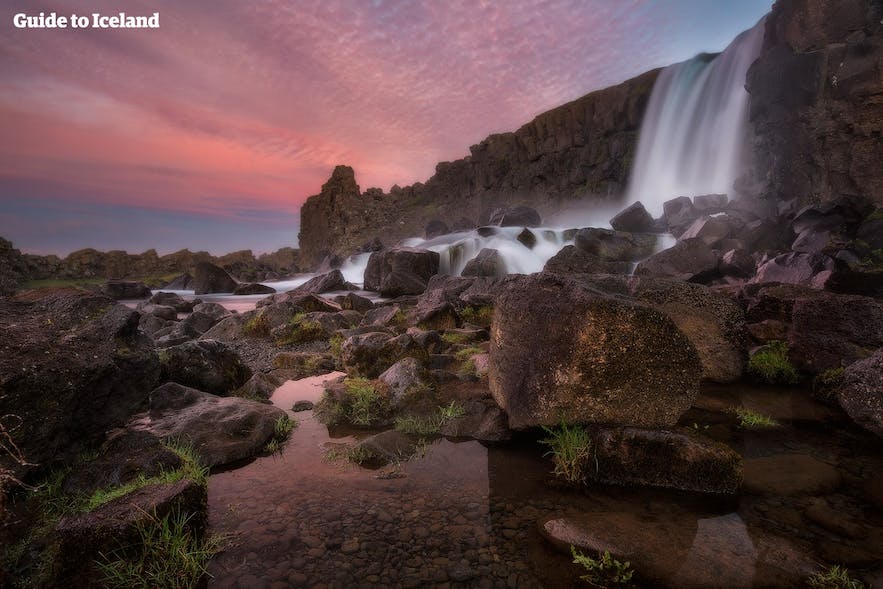 You are welcome to walk alongside both of these plates. One of the park’s most pleasant walks takes you between the edge of the North-American plate and an old part of the wall that collapsed away; this is called the Almannagjá gorge. This path impresses the geological processes going on here upon you very clearly, and ends with a charming waterfall called Öxaráfoss.

The tectonic plates move apart at approximately 2.5 centimetres a year and have done for millenniums. The effects of this movement are very clear within the park. Lava fields fill the valley, from magma that welled up as the continents spread, and the whole area is littered with ravines, ripped open by centuries of earthquakes.

Earthquakes continue every day in Þingvellir, although most are far too minor to be felt. No volcano has gone off in the area in 2000 years, but they are not considered extinct. More eruptions are expected; the question is only as to when.

See here for more information on volcanoes in Iceland 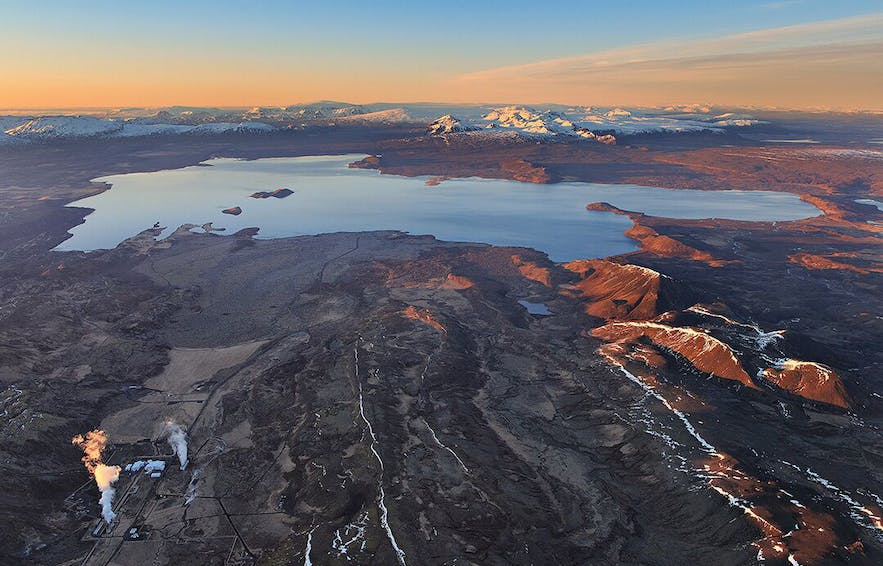 Between February 2015 and February 2016, almost 700,000 people visited Þingvellir National Park, making it one of the most visited sites in all of Iceland. Located just 45 minutes’ drive from Reykjavík, and the first stop on the Golden Circle, these numbers are only expected to increase with the rate of tourism.

Today, people come for more than just the history and geology (although they remain the most prevailing lures). Many, for example, come for the opportunities regarding snorkelling and diving. The ravines opened by the tectonic movement fill with the meltwater from Langjökull glacier, which has travelled underground for decades through porous lava rock, undergoing a very thorough filtration process. When it enters the ravines, therefore, it is pristinely clean and crystal clear. 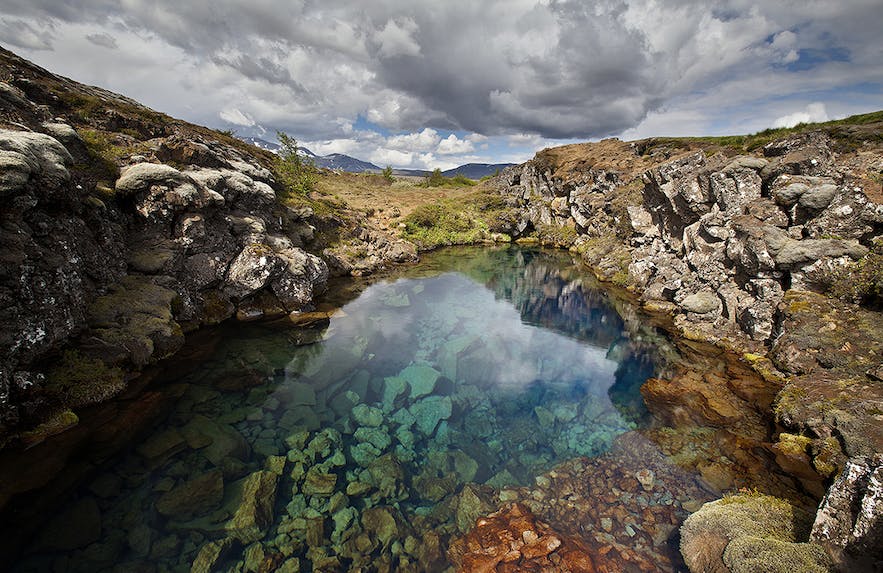 The most famous one of these ravines and the only one it is permitted to snorkel or dive in is Silfra. The visibility of the water within it exceeds a hundred metres, allowing visitors to immerse themselves in a world of magical blue light, and witness incredible geology beneath the surface. As the water is two degrees Celsius throughout the year, drysuits are required for this activity, although the occasional snorkelling operator will lead daring groups in wetsuits.

Because of Silfra’s uniqueness, it is often voted as one of the world’s top five dive sites. To partake in a scuba dive, however, requires a drysuit certification or at least ten logged dives in a drysuit, verified by a qualified guide. The snorkelling has fewer requirements, but participants must be at least twelve years old and able to swim. 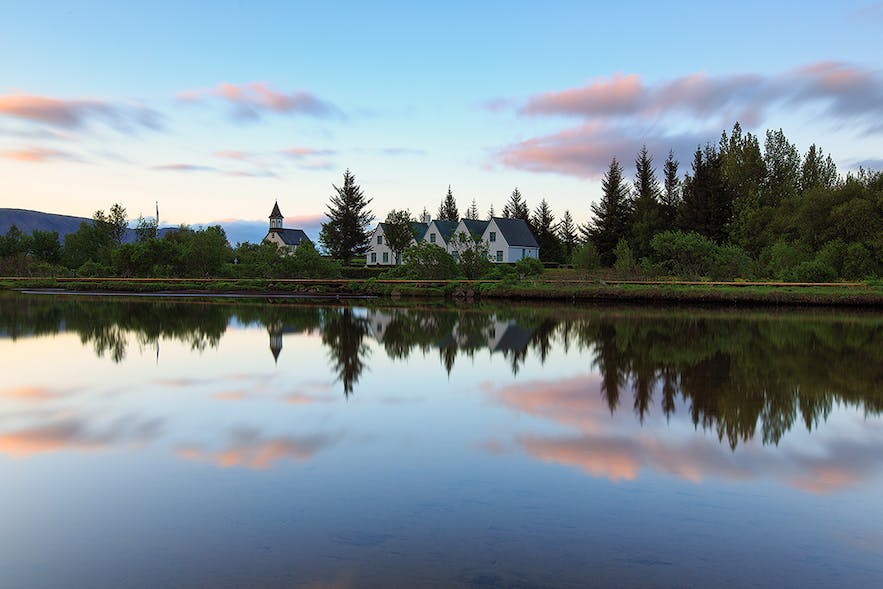 See here for all snorkelling tours

See here for all diving tours

Another trait of Þingvellir that draws guests is its use as a shooting location in HBO’s Game of Thrones series. Please feel free to overlook the next two paragraphs if you wish to avoid spoilers.

The aforementioned Almannagjá gorge is used to represent the Gates of the Moon, which lead towards the Eyrie, home of Lady Lysa. It is visited in Season One by Caitlyn Stark and her party (including an imprisoned Tyrion), and in Season Four by the Hound and Arya Stark. Buildings are edited on top and behind it, and the walls are lined with crossbowmen on the show; if you are a diehard fan, however, you should be able to recognise the location very quickly.

The surrounding area is also used as the site where the Hound fought Brienne of Tarth and was left for dead. The lake Þingvellirvatn, Iceland’s largest natural lake which sits to the south of the park, was used as the bay from which Arya leaves Westeros to head for Braavos. The special effects crew simply removed the mountains from the far side of the lake to make it appear like the water opened out into the ocean. 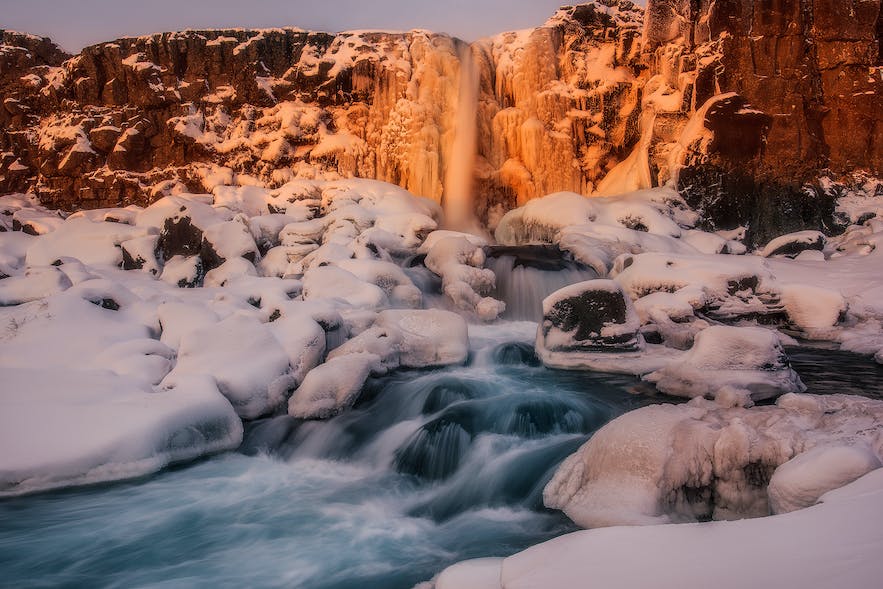 The animal life at Þingvellir also brings guests. Fishing in the lake for its trout, which, due to 10,000 years of evolutionary isolation, are large for their kind, is popular, if highly regulated and expensive. Birdwatchers also flock to the area in summer, for its many species of duck, its golden plovers, and its common snipes. Wildlife enthusiasts can also keep their eye on the undergrowth and the edges of the waters, for Arctic Foxes and Mink respectively.

While visiting Þingvellir is a highly sought-after experience and is very rewarding, the number of visitors coming through the park has had a significantly negative effect on the nature. As tourism boomed, infrastructure struggled to keep up.

The moss that covers the lava rock throughout the park is incredibly delicate, and those who have not stuck to the paths during their visits have damaged much of it; it will likely take decades to recover fully. The heavy metals in coins that people have thrown into a ‘wishing well’ have seeped into the lake and are now above appropriate levels. Those staying at the campsite have been known to leave their waste behind. These are just a few of the ways tourism has damaged the park. 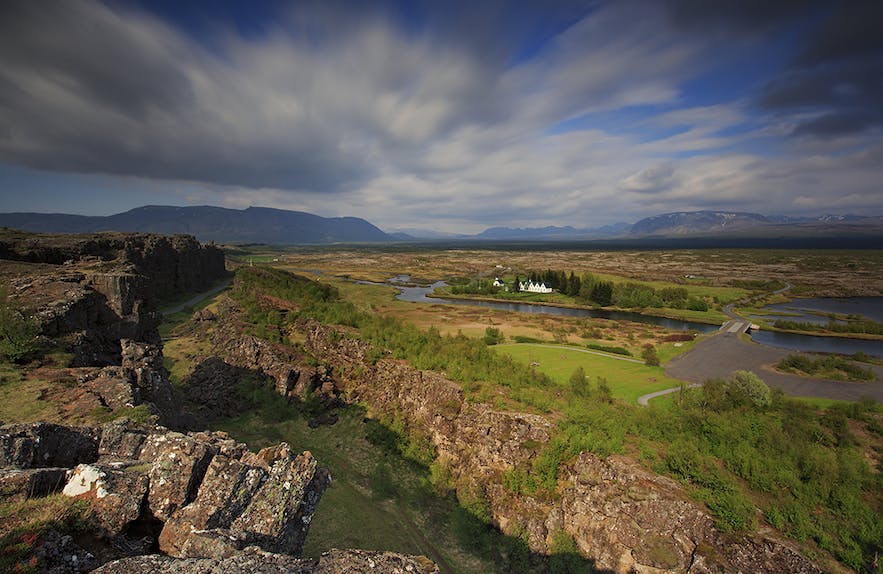 Infrastructure is catching up, however; paths are now clearly marked, and many rangers patrol the area to ensure that they are being stuck to. Regulations on snorkelling and diving are ever increasing, to limit the impact of humans on Silfra as much as for safety, and visitors are now discouraged from dropping money in the waters. Þingvellir is also becoming someone of a national leader in reforestation, with much of it covered in native birch and non-native pines.

Visitors to Þingvellir can greatly help its survival by respecting the basic rules and leaving as little impact as possible. Ideally, Þingvellir can be a beautifully preserved place that will leave you wanting to bring the ideals of natural beauty and cultural protection back home with you.

Although affected by tourism, its history, culture, geology and natural beauty mean that it certainly still has this potential.