Hólmavík is a lovely town on the east coast of the Westfjords of Iceland and the largest town in an area called Strandir. In this area, Strandir, at Trékyllisvík, 3 men were burnt at the stake for sorcery in 1654. A witch-craze followed and this period of time in Iceland, from 1654-1690 has been called "Brennuöldin" or the Fire century.

Another 16 men and 1 woman were burnt at the stake, the last one in 1690. You can learn all about this at the Museum of Icelandic Sorcery and Witchcraft in Hólmavík. I have written a special travel-blog about this ever so popular museum. 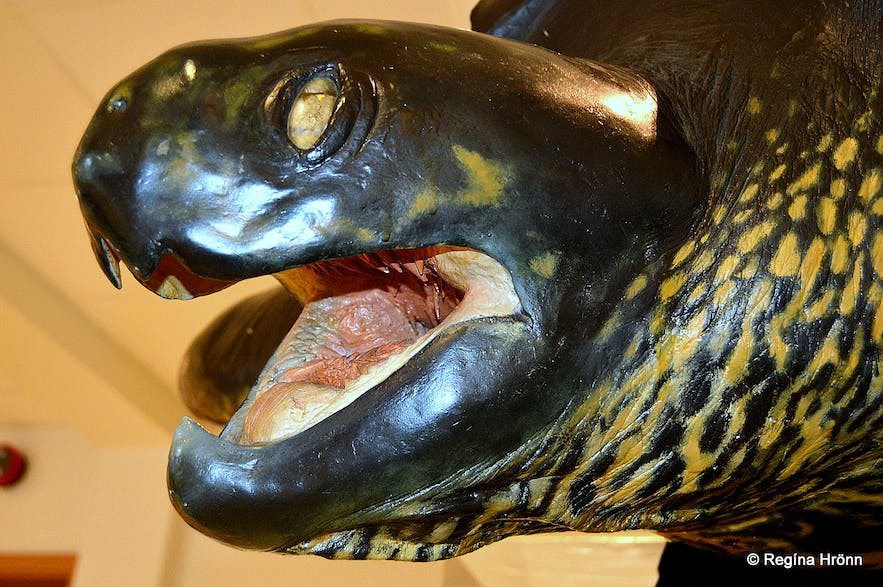 At the "Þróunarsetur Hólmavíkur" - the Development Centre of Hólmavík you will find on display something very unusual for this area - a casting of a big sea-turtle, which was caught in 1963 close to Hólmavík!

This sea-turtle is called "Leðurskjaldbaka" in Icelandic or Dermochelys coriacea and is the biggest sea-turtle in the world! It is found in the tropical and sub-tropical sea, so it is very unusual to find one in Iceland. 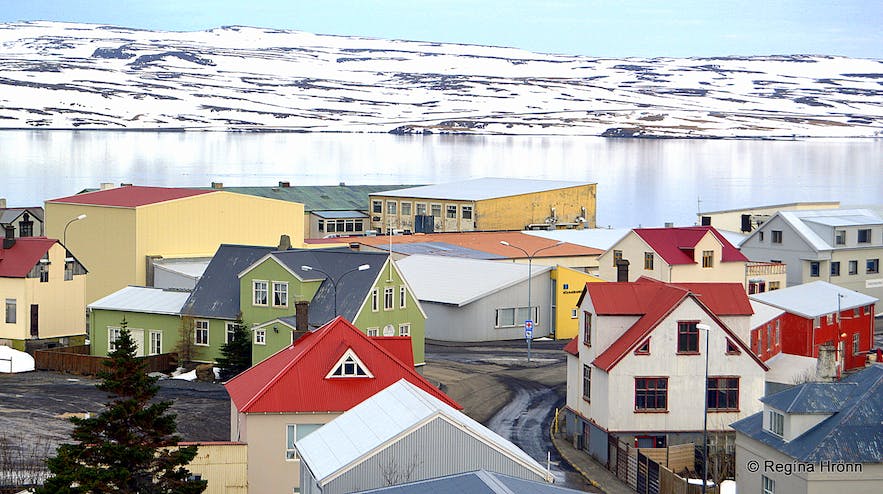 In 1963 Einar Hansen, who was a resident of Hólmavík of Norwegian origin, went out fishing in his boat. He found this big sea-turtle on Steingrímsfjörður bay and hauled it ashore in Hólmavík. It created quite a stir as sea-turtles (monsters) are not usually found in the cold sea around Iceland.

The sea was really calm on that particular day, but the sea is often calm in this area. By the boat, they spotted the sea-turtle but didn't realize straight away what it was. They thought it might even be a barrel of rum!

They managed to put a shark-hook in the sea-turtle's mouth and fastened it to the boat. A 25-minute-ride to Hólmavík took them an hour while carrying this heavy sea-turtle. 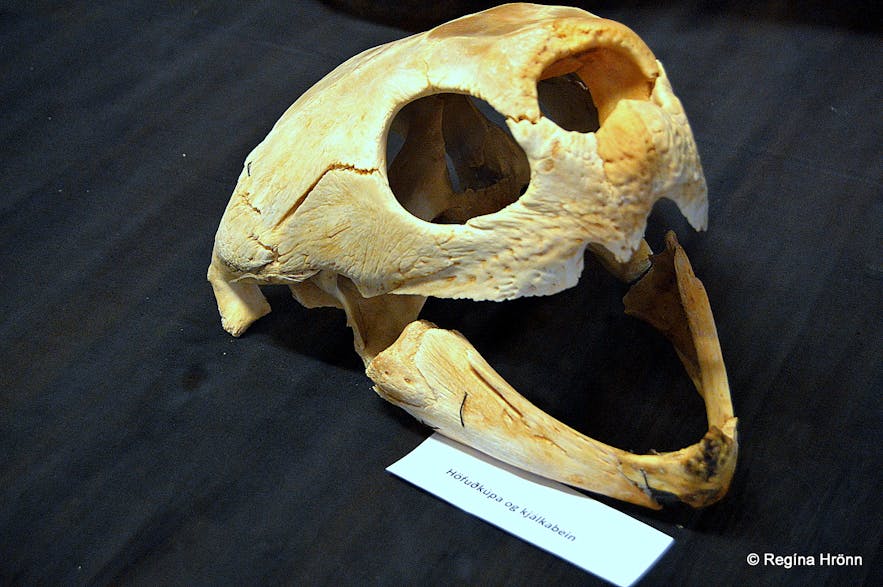 When the people in Hólmavík heard of this sea monster everybody left their workplace and ran towards the Kaupfélagsbryggja quay. Amongst them was the MD of the area and he pronounced the sea-turtle to be just recently dead - and thoroughly intact.

The sea-turtle weighed 375 kilos and was 2.03 meter's long - really huge! It was put in the freezer of the freezing plant of Hólmavík and was later shown to people in Akranes and Reykjavík in SW-Iceland. A couple of thousand people came to have a look at this rare find in Iceland! 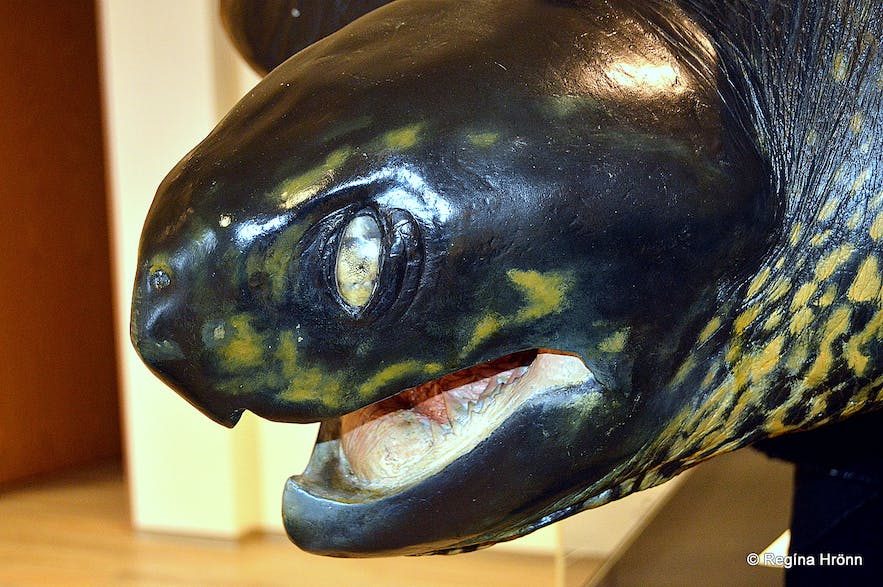 The sea-turtle found its way back to Hólmavík in 1998, when it was lent to the town for the exhibition Sea-monsters from the South-Seas - the sea-turtle adventure in Hólmavík 1963.

You can find the sea-turtle cast and the remains of the sea-turtle on display at Þróunarsetur Hólmavíkur, which is right opposite the Museum of Icelandic Sorcery and Witchcraft. 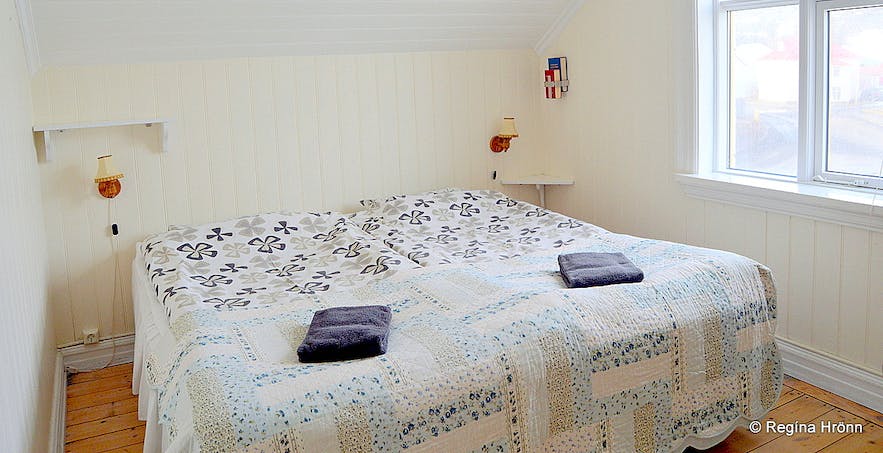 We stayed at Steinhúsið hotel for 2 nights. My husband was entertaining and teaching at the Cultural Festival for Children in the Westfjords for 3 days and we needed a place to stay in Hólmavík.

We opted for Steinhúsið as it is conveniently located in the centre of Hólmavík above the Museum of Icelandic Sorcery and Witchcraft, where we planned on having dinner during our stay. 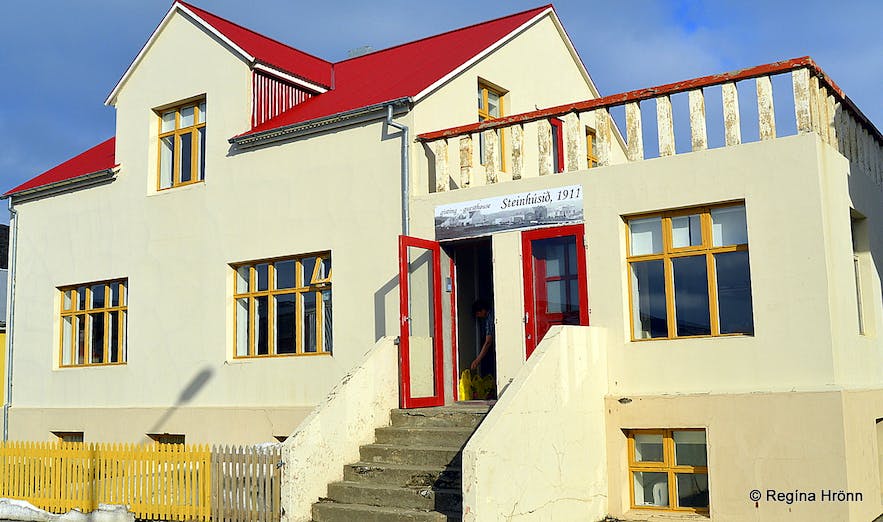 Steinhúsið is an old building, built in 1911 - the first concrete building in Hólmavík. The owners, two sisters, refurbished this old house in 2006-2010 and did a marvellous job.

It has got a lovely feel to it, there are 5 double-rooms upstairs and one has to climb up a steep wooden staircase where the rooms are located. Our room was bright and lovely and beautifully decorated. 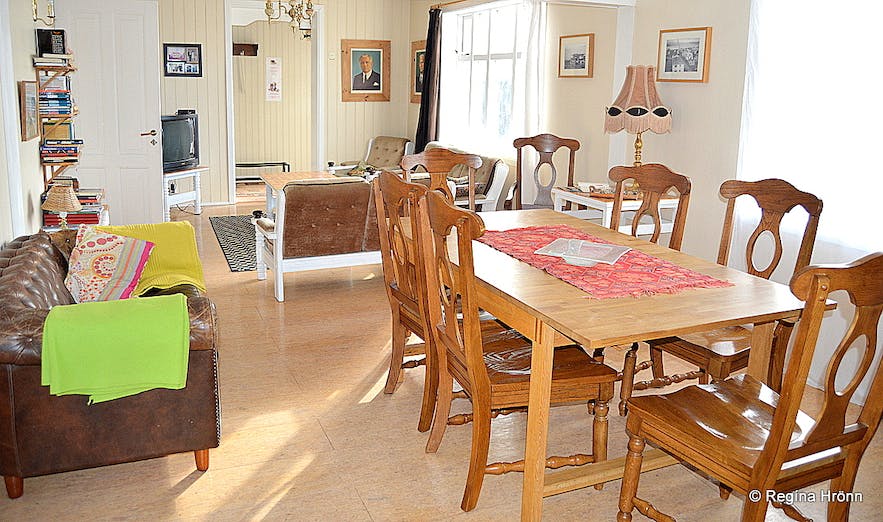 The living room in Steinhúsið

There was a beautiful and bright kitchen on the ground floor and 2 living rooms with books and board games and jigsaw puzzles and everything you need to feel at home. It is like you sat down in somebody's living room and they just popped out.

We had a lovely and very relaxing time at the hotel. 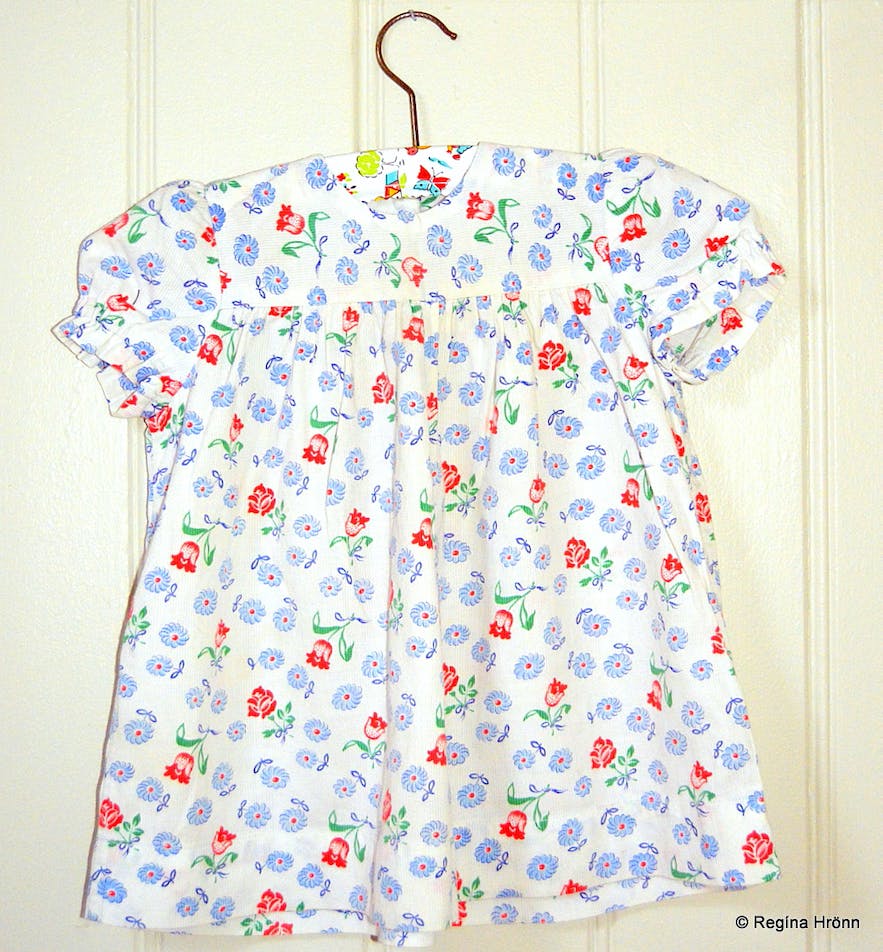 On the second floor, there was a big balcony overlooking the Museum of Icelandic Sorcery and Witchcraft and the ocean with a great view of the town.

Displayed on the walls of the hotel were lovely little girl dresses etc., which the proprietors found in the house while they were restoring it. A lovely idea to put them on the walls. 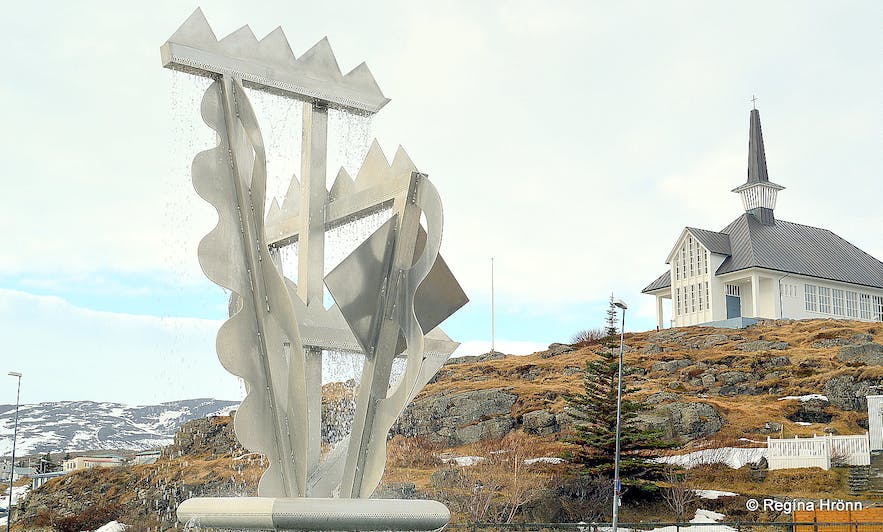 Hólmavíkurkirkja church is one of the landmarks of Hólmavík. It towers above the village on top of a hill. This modern-looking church was built from 1957-1968. I also visited the old church, which served Hólmavík, the church at Staður.

Staður is outside of Hólmavík, so it must have been nice for them to get a church right in the middle of the town. Below is a photo of the old church at Staður. 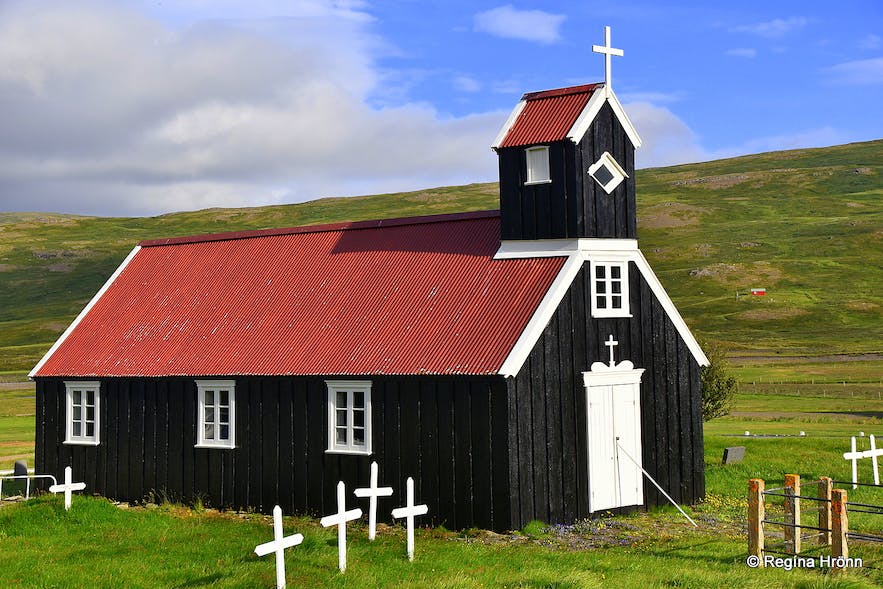 I try to visit all the old country churches on my travels in Iceland. They are pure gems, which way too often are closed as they have been vandalized.

The interior of the new church is made of pine, quite lovely and gives the feeling of warmth. And the view from the church windows is fantastic. 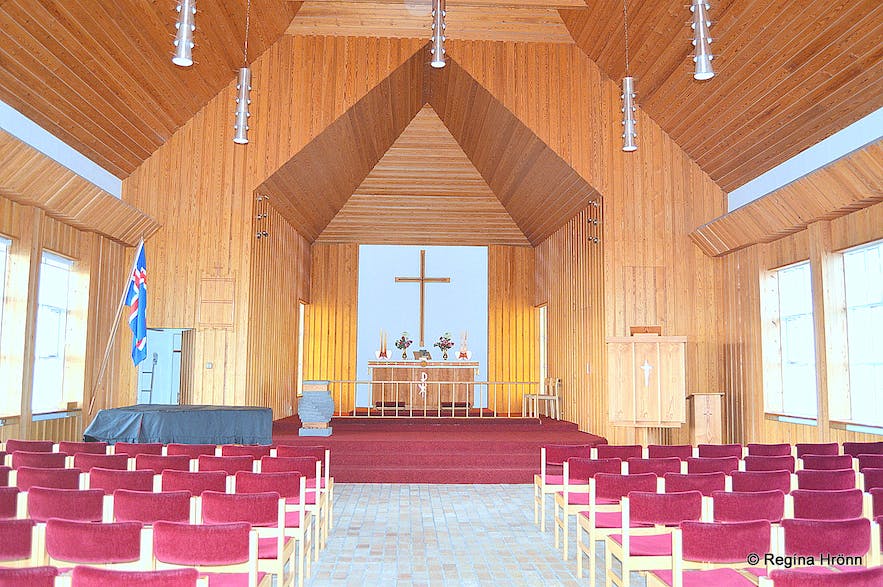 A former minister at the church wanted to block the view with stained glass windows, but the congregation disagreed as they did not want to lose the view.

The altar and pulpit are also made of pine. There is no altarpiece, but a large wooden cross. It is quite a lovely Lutheran church.

The Museum of Icelandic Sorcery and Witchcraft 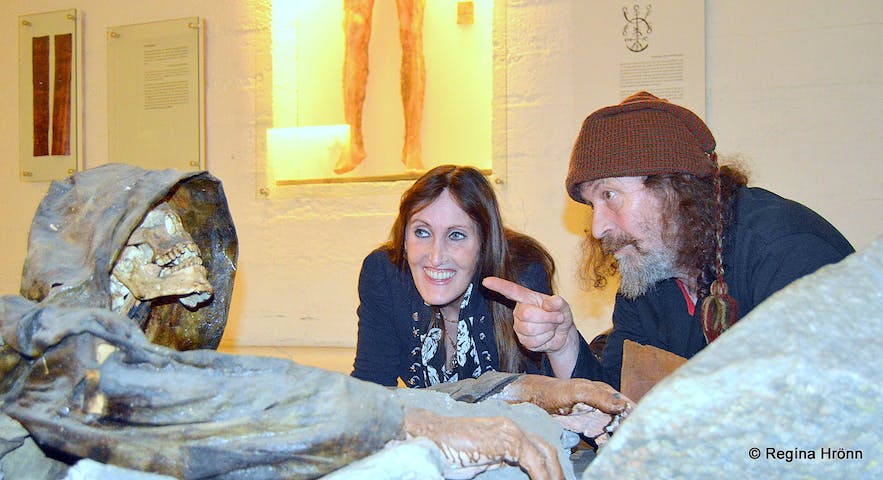 Lying on the floor by the zombie with the late curator of the museum, the sorcerer Sigurður

In Hólmavík you will find a very interesting museum, which is a must-visit while in this area. It attracts around 15,000 visitors annually, the late curator told me. The museum is called the Museum of Icelandic Sorcery and Witchcraft or Galdrasafnið in Icelandic. This museum is the main attraction of Hólmavík town.

It is not for the faint-hearted though as here you will, amongst other horrible things, see a zombie crawling out from his grave and the infamous necropants! 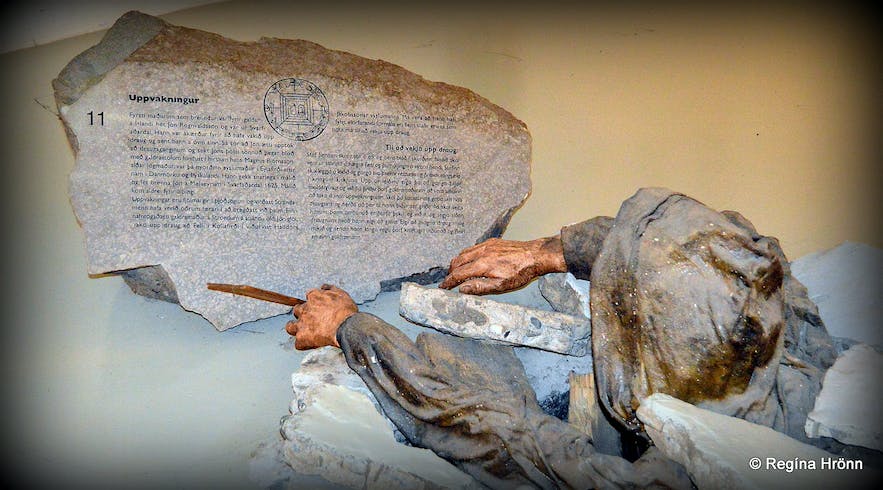 I have written another travel-blog about the museum with a lot of photos, as there is so much to see there. And there you will see photos of the necropants:

Hólmavík is located some 230 km away from Reykjavík. To visit Hólmavík you can rent a car in Reykjavík and drive to the Westfjords in 3 hours.

If you are continuing your journey to the Westfjords from Hólmavík town then remember to fill up on gas here as there is no other gas-station until Súðavík village, which is 204 km away.

I have written many travel-blogs about the northern part of the Westfjords all the way to the end of road 61 Djúpvegur. Following is my first travel-blog in the series with links to the other travel-blogs in chronological order:

I would recommend a visit to the remote Strandir and the village Drangsnes before you continue on your journey.

Drangsnes at Strandir in the Westfjords of Iceland, the Troll and the Hot Tubs 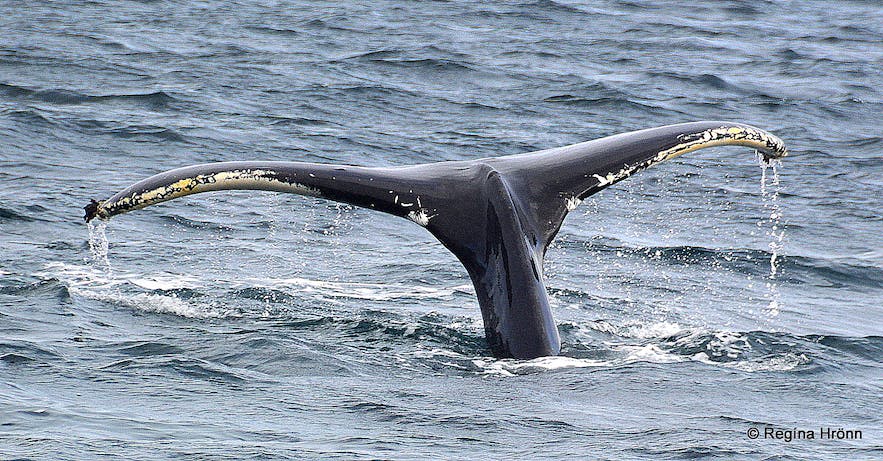 And you might spot some seals and whales as well in this area. I joined a whale watching tour of Steingrímsfjörður while visiting Hólmavík.

Have a lovely time in Hólmavík and at Strandir in the beautiful Westfjords of Iceland :)