Aldeyjarfoss is one of the most beautiful waterfalls in Iceland, found within the northern highlands in the Skjálfandafljót river.

Visit this incredible waterfall while on a self-drive tour in Iceland.

Aldeyjarfoss stands at twenty meters tall, and plummets into a beautiful blue lagoon. It is best known for its surrounding geology, as on either side of it are rows of hexagonal basalt columns, features found in few places around the world.

When lava was flowing down the cliff faces at Aldeyjarfoss during an eruption centuries ago, the outer lava, which was exposed to the air, cooled into solid rock fasting than the layers beneath. In this case, the lava was moving in a way that meant it cooled quickly at the same rate over an even surface.

These basalt columns can be found in several places around Iceland, such as along Gerduberg on the Snaefellsnes Peninsula and at the cliffs in the village of Hofsos. The only other easily accessible waterfall with them, however, is Svartifoss in the Skaftafell Nature Reserve, in the south-eastern corner of the country.

At Aldeyarfoss, the columns are more diverse in color than their black counterparts at Svartifoss, with yellow and red shades created by the sulfur and iron brought up in the eruption. 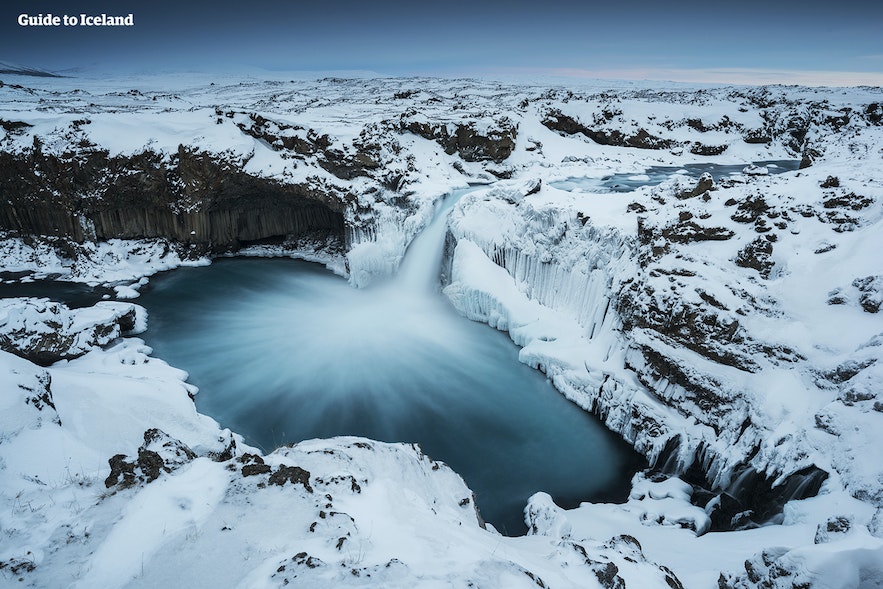 Aldeyjarfoss is located just inside the north Icelandic highlands. It can be reached by turning onto Route 844, which leads off the Ring Road between Akureyri and Mývatn. This road will lead onto Route 842, before it continues onto a highland track, the F26. Highland routes should only be approached in a four-wheel-drive.

To reach this less-known area, turn off Route 842 when you see the signs for the farm Stóratunga. This route will take you past the aforementioned Ullarfoss falls, renowned for being fed by clear springwater, and over a bridge. You will then turn left on a gravel road signposting towards to Aldeyjarfoss, follow it to a small carpark, and from there take take a short hike to the northern bank.