Hofskirkja turf church in Southeast Iceland is the youngest of Iceland’s distinctive and rare turf churches.

As an attraction off the beaten path but still close to major Icelandic destinations, Hofskirkja is an ideal side excursion on a self-driving tour of Iceland’s southern and western coastal glaciers or a complete driving tour of the nation.

The church is in Hof, a cluster of farms in the Oraefi region of Southeast Iceland. This village is close to the Ring Road. It lies under the immense Vatnajokull glacier, just southeast of Skaftafell.

As such, after exploring Vatnajokull’s ice caves and glacier hiking at Skaftafell, you can marvel at the church’s antique architecture.

The Hofskirkja turf church’s structure is wooden timber, with walls made of rock and a roof covered in turf, making it appear like a home built into a hillside. Indeed, the church is partially submerged in the earth, naturally cooling the space in summer and warming it in winter.

This style has been present in Icelandic architecture since settlement, providing inhabitants ample protection from the elements. The stone material helps insulate inhabitants from the cold, while the turf topper traps warm air.

The added benefit of the stone-and-turf design was material availability. Iceland had comparatively little timber available after deforestation and volcanic eruptions in the early middle ages, so the turf design allowed for safe and secure buildings that required little wood.

The advent of concrete in the twentieth century caused turf buildings to fall out of fashion. Now, only six turf churches remain in all of Iceland, of which Hofskirkja is the youngest. It’s essentially the last turf church in Iceland and one of the few with an active community.

The interior of Hofskirkja is noteworthy for its delicate yet profoundly beautiful design.

Structurally, the church's interior has three sections. It has a nave where the congregation sits and a chancel with the musical instruments, choir, and altar.

In a unique twist on the European-inspired architecture, Hofskirkja’s altar is within the choir, in a fenced-off space in the center of the church. It’s here at the center where the pastor performs the liturgy.

The interior has a delightfully colorful design. A wooden chancel painted in seafoam green and orange-red has a painted aquamarine pulpit embedded. This contrasts nicely with the warm brown floor, the cream walls, and the rusty reds and oranges of the seating.

But the element that ties the space together is the picture at the front of the church. Set against the cream walls is a portrait of Christ wearing a red robe with a blue sky above. It’s a brilliant play of cool and warm colors.

The portrait perfectly complements the church’s color scheme, including the blue ceiling above. Below the painting is a gleaming golden cross.

The physical space, while snug, can hold around 80 people. So while it might not be the largest church, it is sufficient for the village’s worship.

According to medieval documents, a church in Hof has existed since 1343. However, the iconic turf church was constructed in the nineteenth century, with construction beginning in 1883 and ending in 1885.

Hofskirkja’s history is one of community. Carpenter Pall Palsson built its skeleton, Olafur Tubals built the altar, and Jon Jakobsson constructed the pulpit. Helgi Bjornsson created the baptismal font, and Thorsteinn Gissurarson (nicknamed “Tol” or “Tool”) made the locks and hinges.

In the decades after its construction, however, Hofskirkja fell into disrepair. After the parishioners deliberated the best way to restore the church, they determined that it would be most cost-effective to allow the National Museum of Iceland to rebuild the church as a historical site.

They could not have done so at a better time. By the mid-twentieth century, the favored construction style had changed. The turf-style architecture made way for modern concrete construction designed to keep warm air in more efficiently.

Nonetheless, turf remains a prime example of Iceland’s rich architectural history. As a result, the National Museum of Iceland accepted the proposal and, in 1953, constructed Hofskirkja as a historical site.

Uniquely, Hofskirkja has remained in active use among its Lutheran parish community. In 1955, one year after construction, the church was reconsecrated by Bishop Asmundur Gudmundsson, the prelate of Iceland. 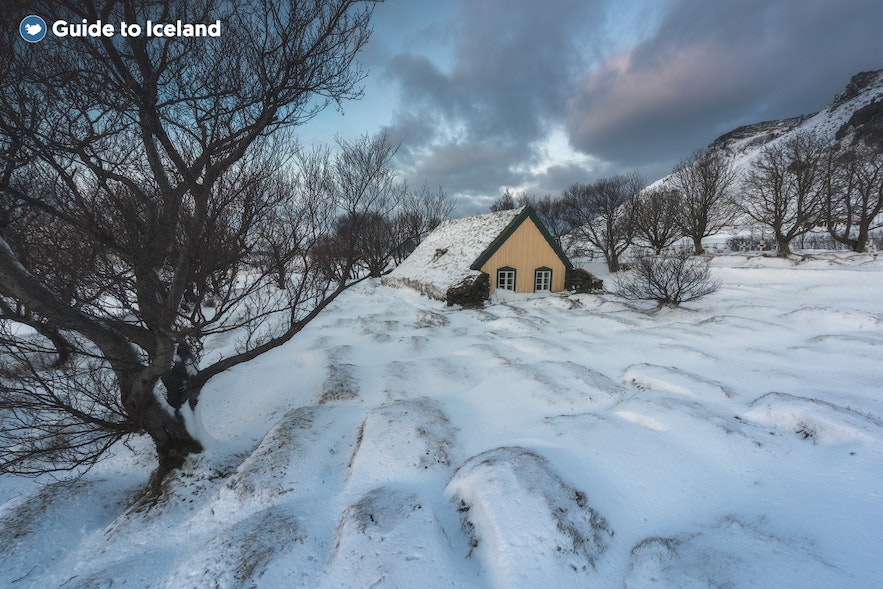 Whether Iceland’s religious history entrances you, you’re fascinated by architecture, or you simply love beautiful sights, Hofskirkja has plenty to offer.

The church graveyard is next to Hofskirkja, containing the graves of the parish’s deceased. The cemetery opens up to a magnificent rocky landscape, allowing you to spend time in reflection and wonder.

Hofskirkja’s construction materials are incredibly well-preserved. You can find the tub outside the graveyard where Thorsteinn Gissurarson, the town’s blacksmith, cooled his hot iron tools while constructing the church's hinges and locks.

Getting to Hofskirkja Turf Church

Getting to Hofskirkja by car is incredibly easy. It’s about 208 miles (335 kilometers) from Reykjavik.

While this drive might seem long, it’s a convenient stop on your Ring Road tour of Iceland or excursion to Southeast Iceland. You can visit plenty of other nearby attractions.

No visit to Southeast Iceland is complete without seeing the magnificent Jokulsarlon glacier lagoon or the sublime Diamond beach, part of the Breidamerkursandur glacial plain. These destinations are around 23 miles (37 kilometers) northeast of Hofskirkja.