Visiting the lagoon is like entering a magical world, and I say "wow" every time I see the glacial lagoon, no matter how often I visit.

The glacier's name is Breiðamerkurjökull, a glacier tongue from Vatnajökull, Europe's largest ice cap by volume.

Huge blocks of ice (more than 1,000 years old) are continually calving from it and large chunks of icebergs float in the lagoon. 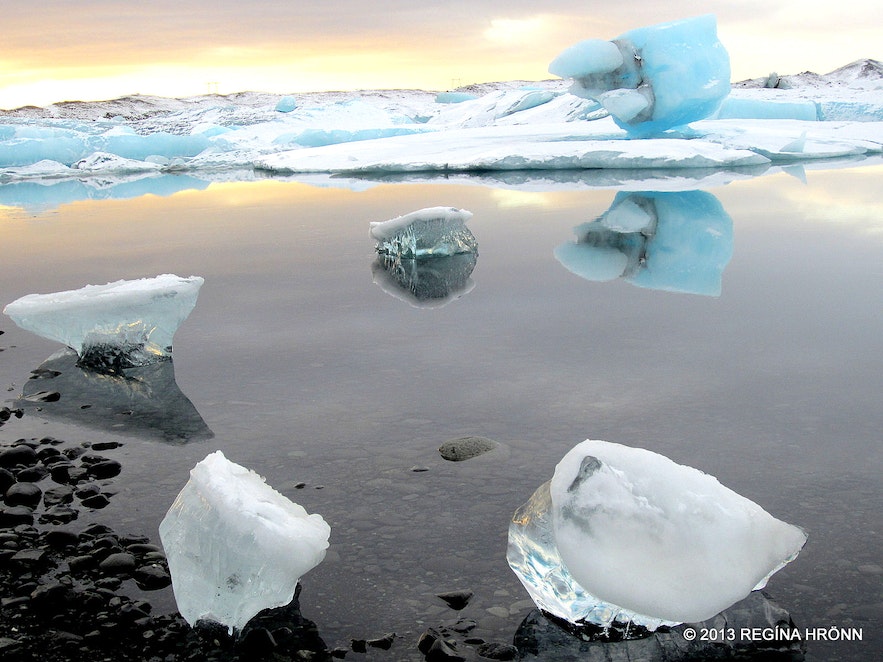 The lagoon only appeared "recently", or around 1935, and has grown to some 18 km2 due to the melting of Icelandic glaciers.

Jökulsárlón is now the deepest natural lake in Iceland, and the lowest point below sea level in Iceland.

The water in the lagoon is a mixture of freshwater and seawater as the tide brings 10 degrees C warm seawater into the lagoon. This is why there is some fish in the lagoon, which also brings in the seabirds. And seals. So the fauna can be quite lively at the lagoon.

I shot a video of the lagoon on my only winter visit some years ago:

The icebergs and ice chunks in the glacial lagoon take on many forms and colours; they can be transparent, or white, or the most amazing blue colour, as you can see in my photo below.

It is truly like visiting an art gallery. Some of the ice is even black, as ash from volcanic eruptions gets stuck inside the ice.

Remember that only 1/10 of the iceberg is visible, so imagine how huge these icebergs are! 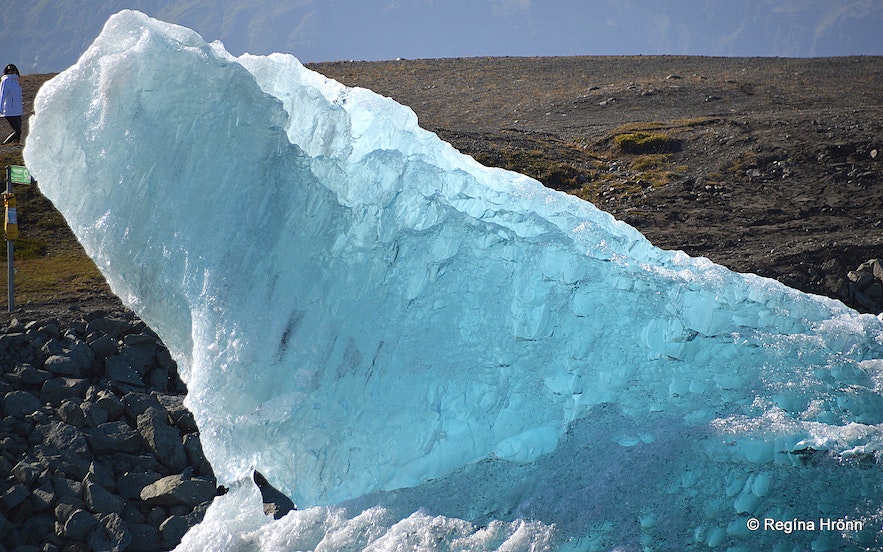 The river leading from the glacial lagoon used to run 1.5 km to the sea before 1950, but now it is much closer, and seals swim from the sea up to the lagoon and rest on the icebergs there. So in addition to seeing beautiful ice formations, you can also go seal watching at the lagoon.

It is especially lovely watching the seals while on a boat ride  on the lagoon in the summertime. They are so curious that they swim close to the boat to have a peek :) 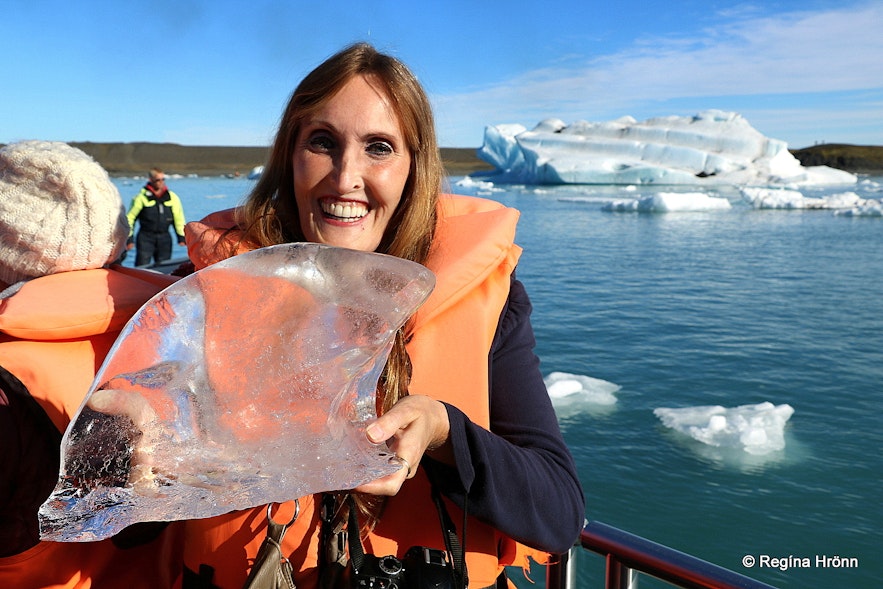 I joined an amphibious boat-tour on my guided tour of the Jewels of the South Coast and can recommend it.

It is a thrilling experience sailing amongst these both huge and small icebergs! I wrote a travel-blog about that tour with plenty of photos:

A guided Daytour of the Jewels of the South-Coast 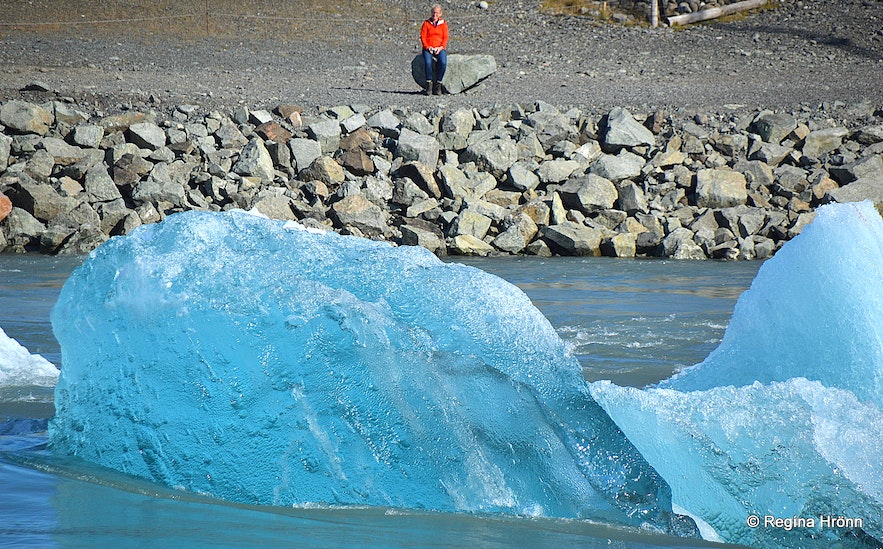 Here are the boat tours on offer on the Jökulsárlón Glacial Lagoon:

An amphibious boat tour on the glacial lagoon

A Zodiac boat tour on the glacial lagoon 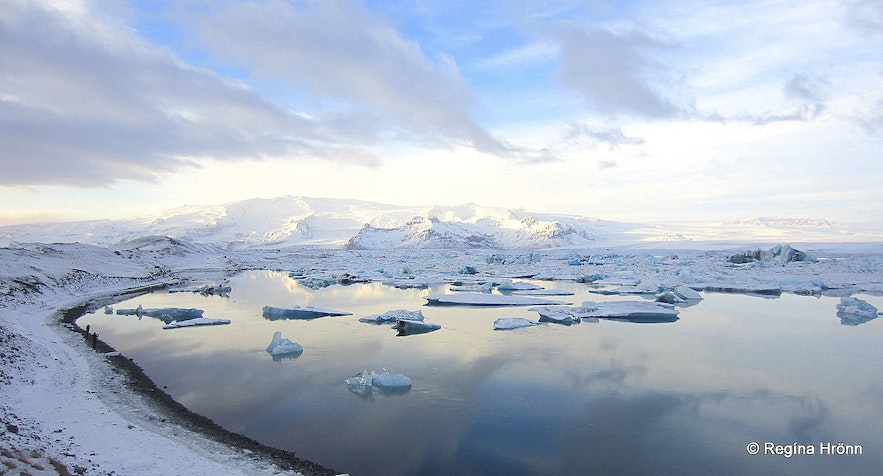 Scenes from the James Bond films Die Another Day and A View to a Kill were filmed at the glacial lagoon.  Also Lara Croft - Tomb Raider.

A word of warning - don't jump onto the ice floating in the lagoon. Some tourists have recently started doing this, but it is a dangerous play, and the ice can capsize leaving you stuck beneath it in the ice-cold water. So let's be very careful here.

This life-threatening "play" is happening more and more, and on the 26th of November 2017, the police had to be called in to order a flock of tourists to get off the ice immediately.

One reckless person started this, obviously unaware of the grave danger they were putting themselves in! Other people followed suit. 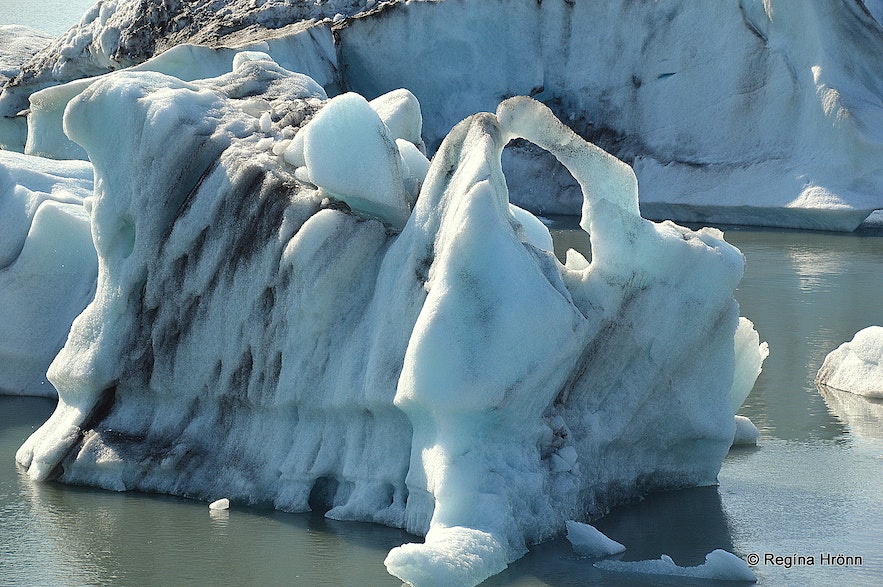 There was even a newlywed couple having their wedding photos taken out on the ice! Please heed the advice of the locals and never ever step on the ice in the lagoon!

Things that can kill you in Iceland

Dumbest Things to do in Iceland 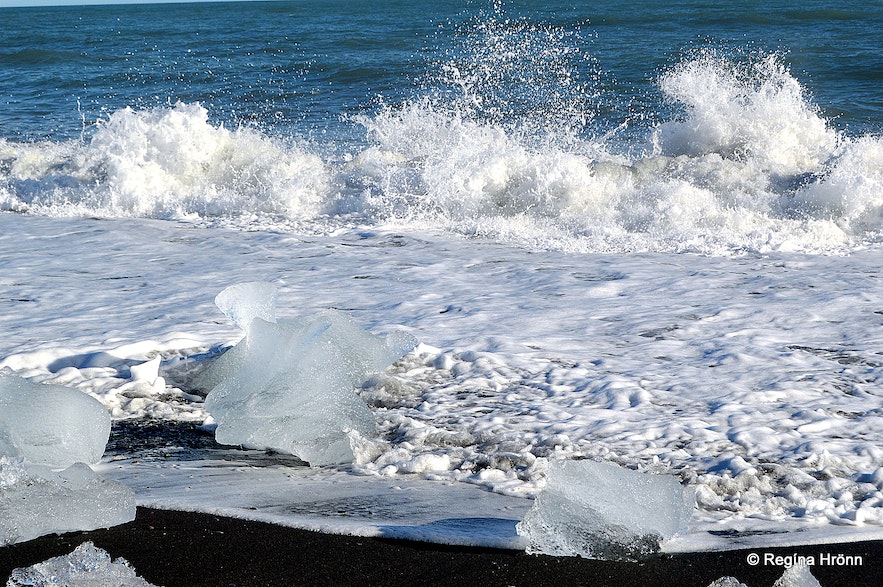 The icebergs float from the glacial lagoon, under the bridge, and towards the sea, where they meet the waves of the Atlantic ocean.

Here some of the ice chunks, which have been polished by the sea, get washed ashore and strand on the black beach. They look like beautiful ice-diamonds!

That is why we started calling this beach the Diamond Beach to see if it would become a tourist attraction.

A sign with the right name has been put up now

And if you are lucky enough to visit Breiðamerkursandur on a sunny day you can hold the ice-chunks up towards the sun to make them look like shining gold!

I haven't got a photo like that, but I have seen many such photos from the tour guides in this area. 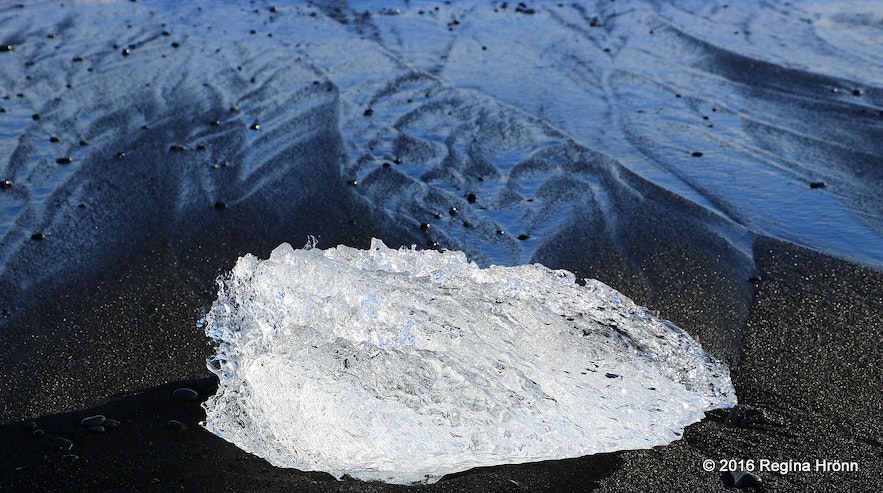 Some of the icebergs have an astounding bright blue colour, and one can follow them by the river from the glacial lagoon and down to the sea. The ice chunks by the sea make for excellent photo opportunities, making it one of Iceland's most popular beaches nowadays.

But that didn't happen until a couple of years ago when I wrote the first travel-blog for Guide to Iceland with the name Diamond beach on Breiðamerkursandur in the title to see if it would catch on. My co travel-blogger Jórunn and the staff at the office came up with this name. 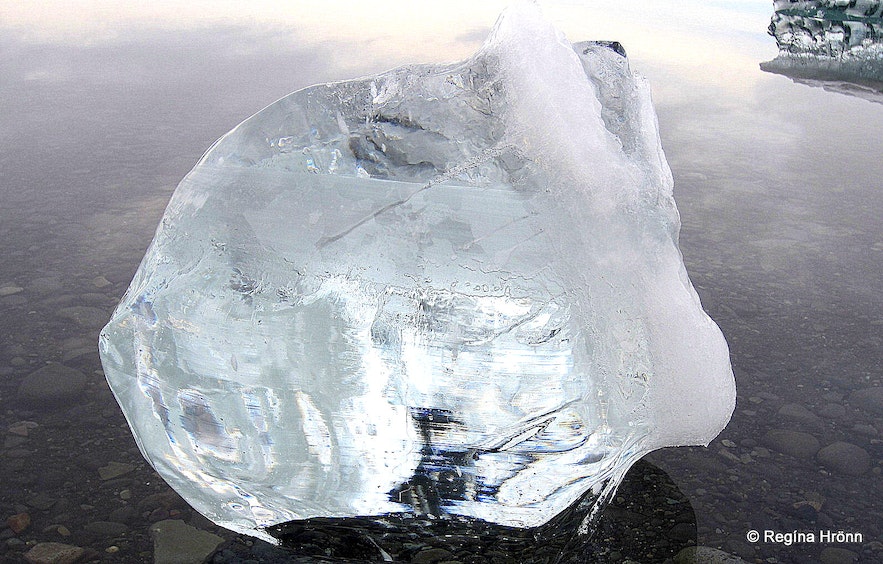 As I have mentioned earlier then the name of this beach is Breiðamerkursandur or Fellsfjara, but tourists now refer to it solely as the Diamond beach. But a made-up name should never replace the old Icelandic topographical name.

I am glad that we were able to introduce this beautiful place to our foreign visitors so that more people can enjoy the brilliant ice diamonds on this black lava beach. It is now a must-stop, whereas I was always alone on Breiðamerkursandur black beach before 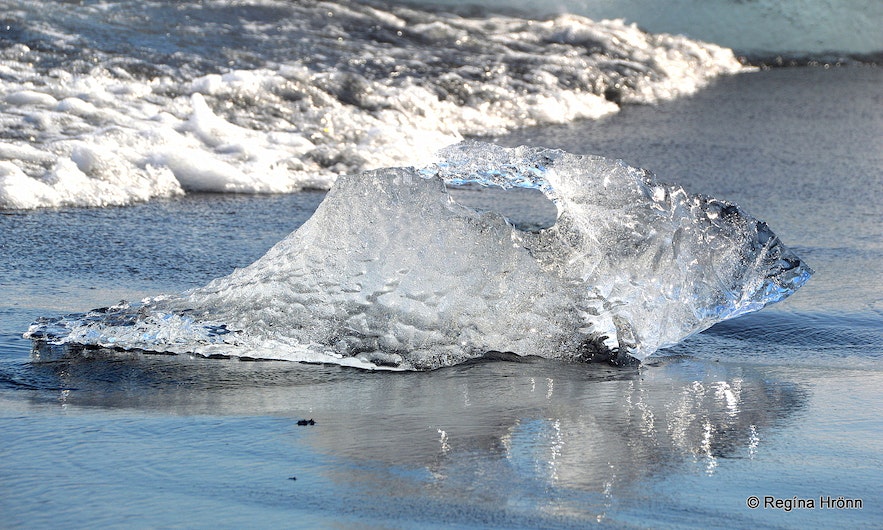 But let's always be very careful here as this is the cold Atlantic ocean we are facing.

Below you can see the travel-blog I wrote about the ice diamond beach on Breiðamerkursandur:

Iceland has got an Ice diamond beach on Breiðamerkursandur in South-Iceland! 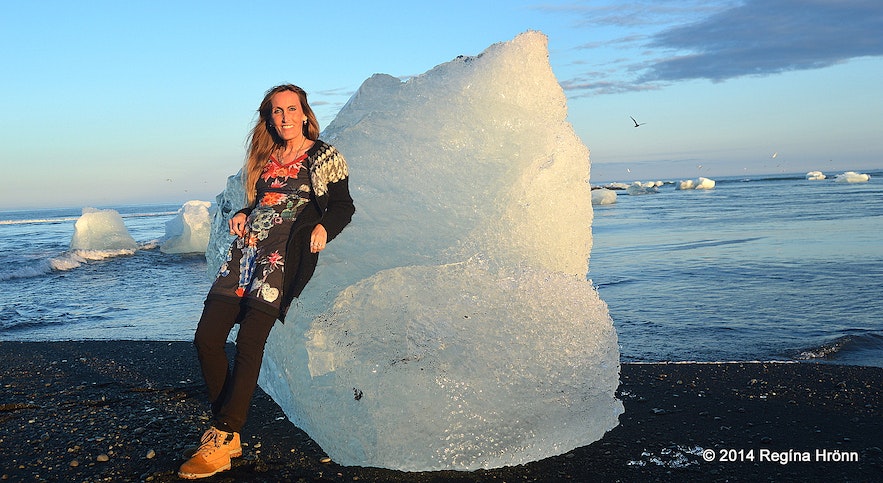 I try to visit Breiðamerkursandur every year and cannot wait to see what the ice-diamonds look like, as each time I visit this beach is different, just like an art gallery.

The lagoon is at its most beautiful in the sun, and I always pray for the sun to shine when I visit it. But it is breathtaking in any kind of weather.

My photos are taken on my many visits through the years, and the one below is taken in November when daylight is scarce here in Iceland. 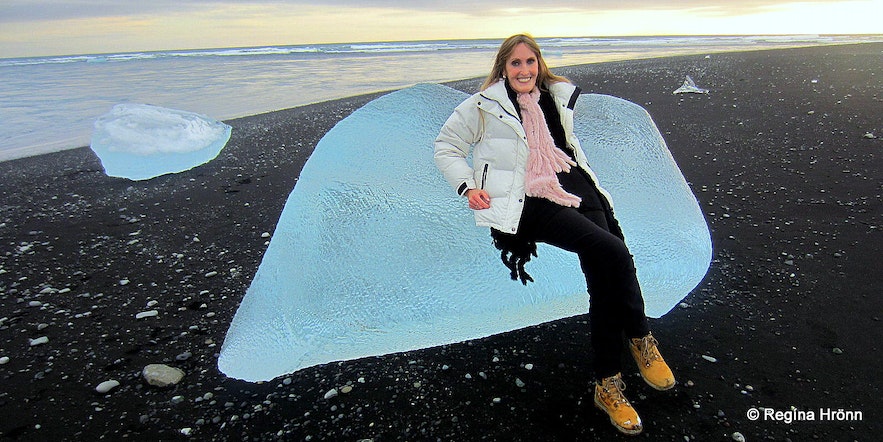 Chilling on an iceberg - always checking if it is safe though

There were big blue chunks of ice on the beach, one of which looked like a powdery blue sofa made of ice. It was very pretty, but it was also freezing to sit in it.

But since 2013 I have created a photo series called "chilling on an iceberg" as such photos look pretty cool, even though I am freezing my butt ;) Never sit on an iceberg though as the tide can come in and carry you away to sea!

I recently wrote a special travel-blog about my winter visit to the Jökulsárlón glacial lagoon and Breiðamerkursandur: 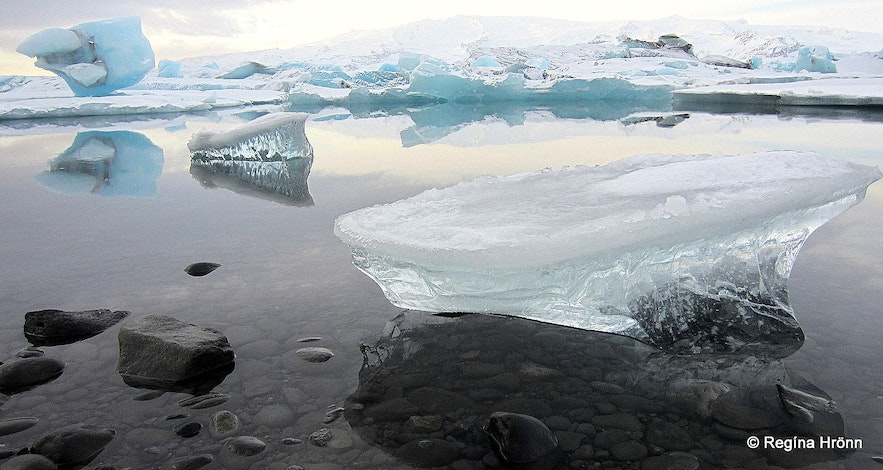 A word of warning: never crawl up on the icebergs and don't choose the ones close to the sea.

And the photographer must always keep his/her eyes on the sea. Or the waves might unexpectedly come in and carry you out to sea.

This has happened on two occasions recently:

Tourist trapped on an iceberg on Diamond Beach 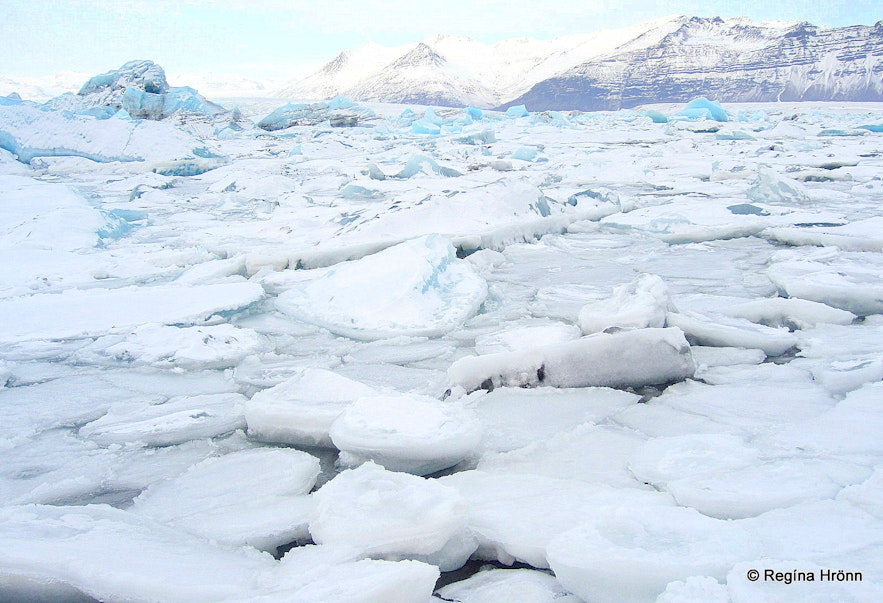 Jökulsárlón was frozen on this November day

On the November day, when the photo above was taken, we were driving from Reykjavík - and seeing that the lagoon is some 370 km away from Reykjavík, we stopped in Kirkjubæjarklaustur village and stayed there for the night.

We were lucky to get some rays of sun before dusk set in.

See also: The historical Kirkjubæjarklaustur and the beautiful Waterfalls 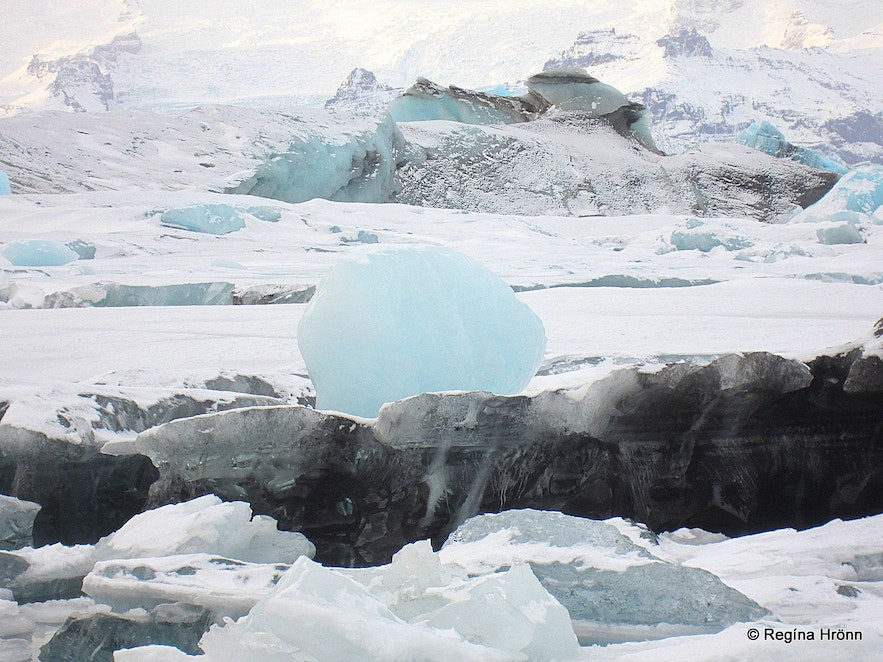 Here you can see a webcam of this area. Once I got contacted by a visitor to the Breiðamerkursandur, who complained about there not being any ice diamonds on the beach.

This is nature and there are no guarantees, but I thought it was strange, so I checked out the lagoon on the webcam. I saw that some icebergs on the way to sea had collided before they reached the bridge and were creating a traffic jam, as it were, as they were blocking the other icebergs from leaving the glacial lagoon.

This happens when dealing with nature, as the tide comes in and prevents the icebergs from reaching the sea. In July 2020 I arrived at Jökulsárlón late in the evening and there was absolutely no ice on the beach and the tide was blocking the icebergs. 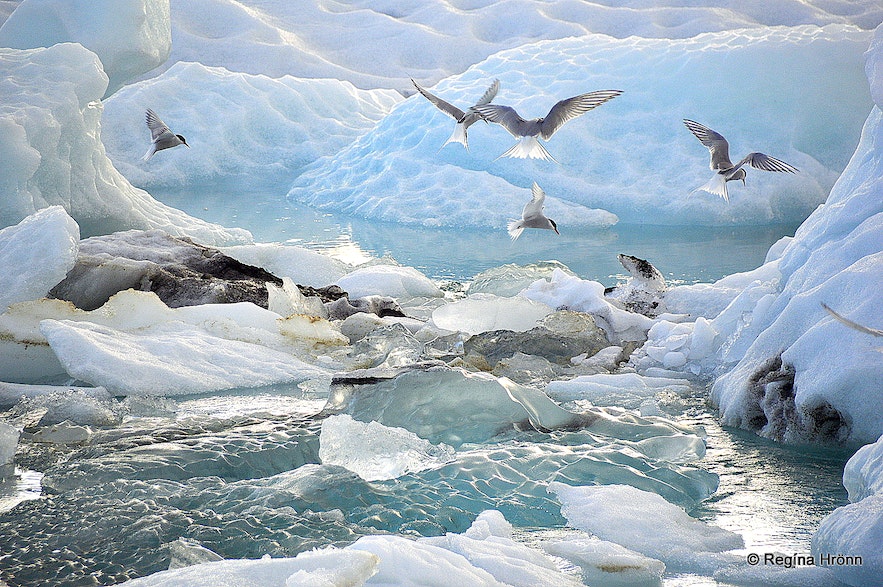 Icebergs collide with each other as the tide comes in

A rock barrier was put in this location to block the bigger icebergs from leaving the lagoon, so only smaller icebergs can float towards the sea. Thus the bridge is protected and the lagoon itself. So you will see huge icebergs colliding at this location.

There is a lot of rackets when the icebergs collide with each other and the Arctic tern, my main enemy here in Iceland, was going crazy looking for fish.

I took a short video of this scenery. The sun was setting, so it was quite dark, thus the icebergs look very blue.

Once at the glacial lagoon, park your car in the parking lot on either side of the road.

Never park on the bridge though, I have seen that happening way too often. The bridge is on ring-road 1 and parking on the bridge literally cuts off traffic on the highway.

The beautiful Jökulsárlón glacial lagoon and the South-coast of Iceland is such a popular place to visit and we have a myriad of guided tours to this area.

You can also rent a car in Reykjavík and drive there by yourself. Just remember that if you are visiting in the wintertime then you have to stay over for at least one night in this area.

Have a lovely time at Jökulsárlón glacial lagoon and Breiðamerkursandur and stay safe in my country :)