Brimketill on the Reykjanes Peninsula

There are hidden geological gems all around Iceland, places where volcanic activity and brutal exposure to the elements form the beautiful phenomena that make this country so unique. You can find hexagonal basalt columns; sea-arches and pillars; towering lava formations; and on the south side of the Reykjanes Peninsula, Brimketill.

Carved by the pounding of waves against soft lava rock, Brimketill is a large, natural pool that sits at the bottom of a cliff at the ocean’s edge. In summer, it is a place of beauty and serenity; in winter, it becomes a place of dramatic wonder.

I visited in winter, with fellow blogger Regína and her family. We were travelling the Reykjanes peninsula in hunt of places that visitors often overlook; already we had been to the Krísuvíkbjarg cliffs and Selatangar ruins, and although enjoyed both locations, knew that they were not at their prime during February. As such, I was not quite sure what to expect from Brimketill. In pictures, it always looked incredibly serene, but there was nothing serene about the weather that day.

Reaching the car park for Brimketill was a different kind of challenge compared to the previous locations. To get to them, we had to drive down unmaintained roads covered in so much snow it was, at times, nearly impossible to tell where we should be going; to reach here, however, we simply needed to find the right turning. 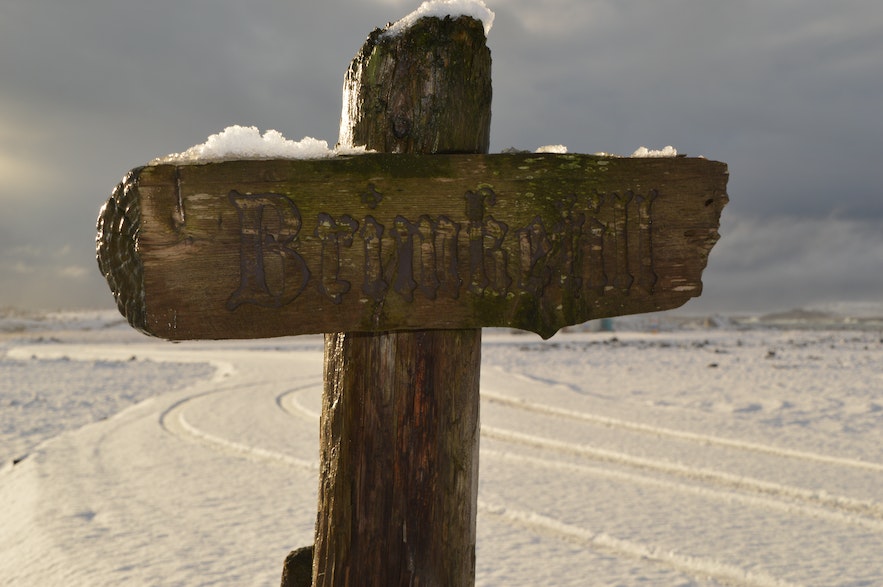 The area is not yet well signposted and did not come up on one of the GPS systems we were using; therefore, it took a keen eye to find out where we should be going. About 10 kilometres from Grindavík, however, we saw a wooden post a short way up a little side road and discovered that, in fading letters, it told us that we had reached our destination.

The carpark was just a short drive further. A large section of it was fenced off, with diggers and building materials inside, and we saw some sort of trail that was in the early stages of construction, heading over the edge of the rocky cliff. We were told by the workers there that the path and viewing platform to see Brimketill would hopefully be ready by summer but were not yet.

Therefore, we took the only other route available and clambered up the jagged lava rock. 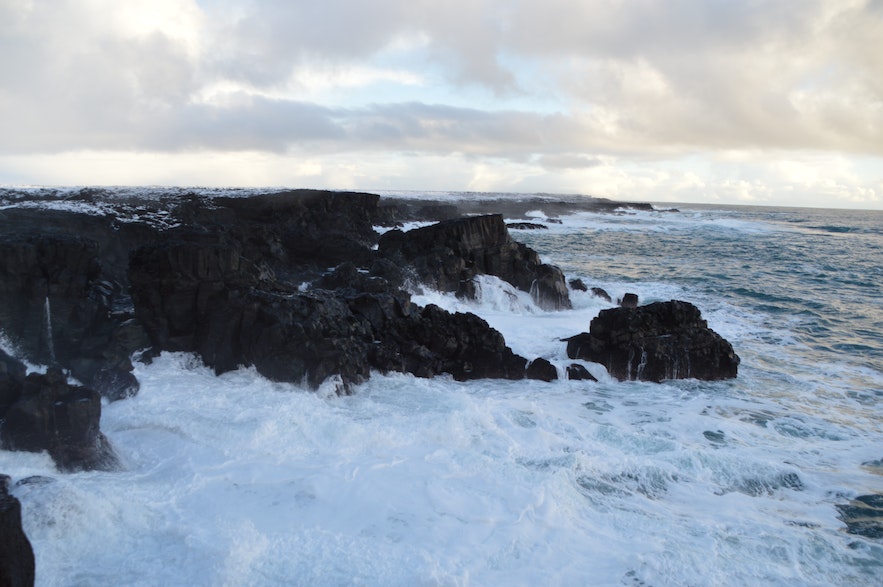 The view from the top of the cliff was daunting and spectacular. Though not particularly high nor particularly steep, great waves were rolling in and smashing against the rocks, throwing spray across our faces and filling the air with the incredible sound of the ocean's power.

Within the rocks beneath us were large pools foaming as seawater was thrown in and dragged out of them, but none of them reminded us of the pictures we had seen of Brimketill.

A few we stared at for a minute or two, wondering if they were what we were looking for; Regína’s father-in-law, however, had clambered ahead and called us forward. When we saw what he was pointing at, there was no doubt that we had found our unique location. 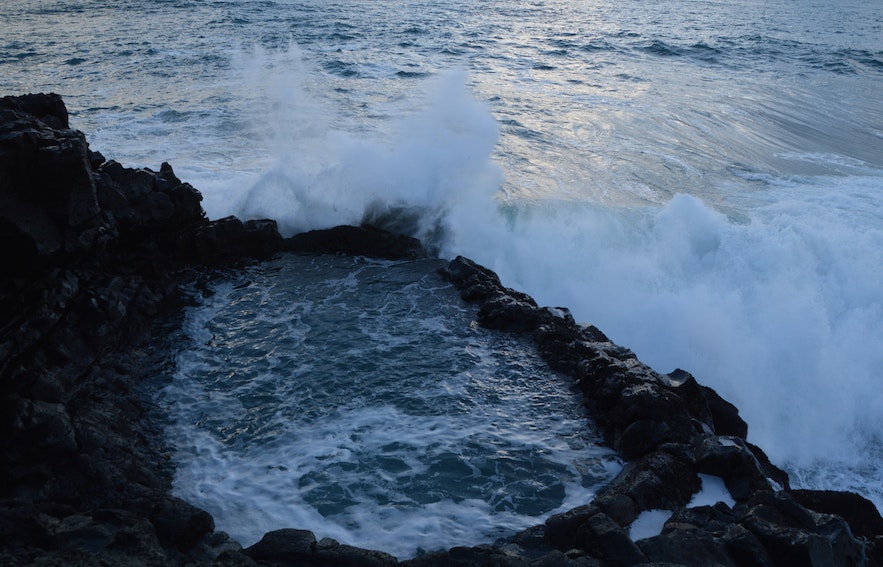 Brimketill, however, was nothing like the pictures I had seen. I thought its surface was still and unperturbed by the forces of the ocean, to the extent that you could approach right up to its edge, and see through to the lava at the bottom of the basin. Not today, however.

We had come at high tide in blustery weather, and Brimketill was under assault from violent waves, and churning with foam. It left no doubt as to how it earned its name, ‘the whitewater cauldron’.

There was no way we could have approached it any closer without being struck by a wave and swept out to sea. Even if I were to return at low tide, in tranquil conditions, I would think twice about descending to its edge, knowing how quickly Icelandic weather can turn and how unpredictable the Atlantic can be; the wet, jagged rocks would not make climbing to safety easy or quick either.

Besides, the top of the cliff is an excellent enough vantage point, and from there we were able to get some lovely photos. 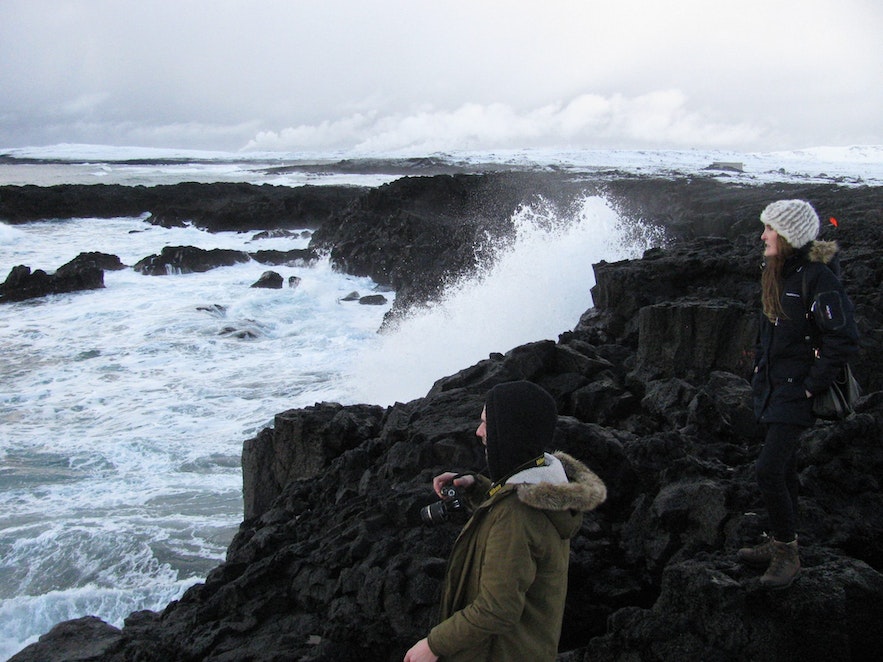 Unlike the other sites on the Reykjanes peninsula we had visited that day, I felt that I had gained more from seeing Brimketill in winter weather that I would have during summer. Seeing the forces it was under not only illustrated how it was created, but feeling the sea spray on my face, as I looked down on the breaking waves from the rugged rocky precipice, was exciting and invigorating.

While approaching Brimketill from the rocky cliff was quite an adventure, however, I would caution those who are unsteady on their feet, or who fear heights or the ocean, to wait until the path and platform are constructed before visiting themselves.

The weather began to ease the longer we stood there; fewer and fewer waves made it over the pool’s edge. Though the waves were no longer shattering against the cliffs and the pool was no longer violently frothing, however, the view was still magnificent, and we stayed staring across it and out to sea for over half an hour.

Under these conditions, it became clearer how the folklore regarding Brimketill had developed; it used to be said that the pool was owned by a giantess, who used it to wash her clothes and bathe. In that time, its name was not ‘the whitewater cauldron’, but ‘Oddný's pool’, or Oddnýjarlaug, after this character. 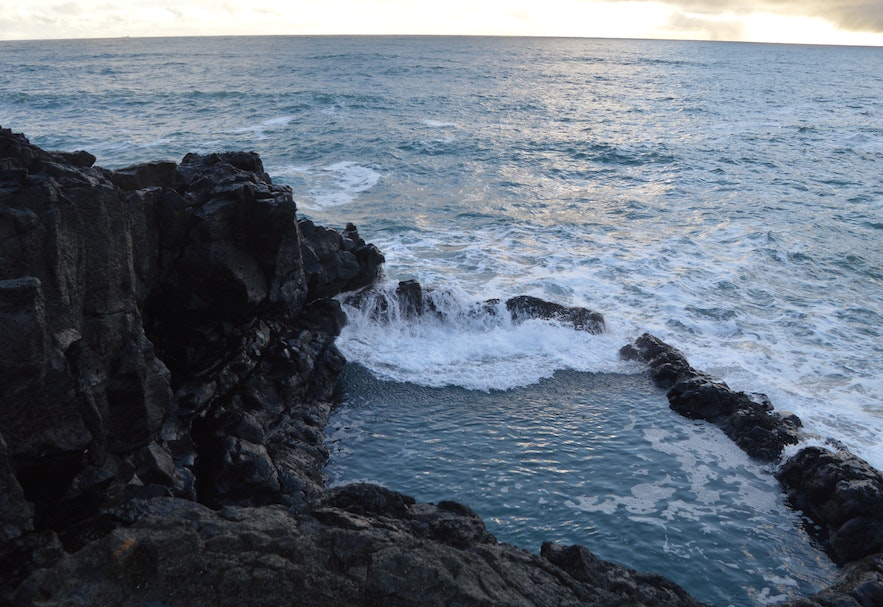 On our return journey, we chose to take the long route back, travelling around the edge of the Reykjanes peninsula. Travelling this way from Grindavík, Brimketill is just the first of several interesting locations, which are all conveniently positioned around each other.

A few kilometres away, you can find a spectacular geothermal area called Gunnuhver. There are many mud pools and vents here, with thick columns of steam rising high into the air; amongst them, you can see the remains of the old path that collapsed when a hot spring opened beneath it.

Further along is the Reykjanes Lighthouse, overlooking the dangerous, rocky coastland on the peninsula edge, and ahead from there is Miðlína, where you can cross a symbolic bridge between the Eurasian and North American tectonic plates. There are also many volcanoes and craters just off the road.

Off this coast on a clear day, you can see the protected island of Eldey, which rises sheerly 77 metres from the surface of the water, and is renowned for hosting one of the world's largest gannet colonies. Luckily, the weather had improved enough for us to be able to catch sight of it. 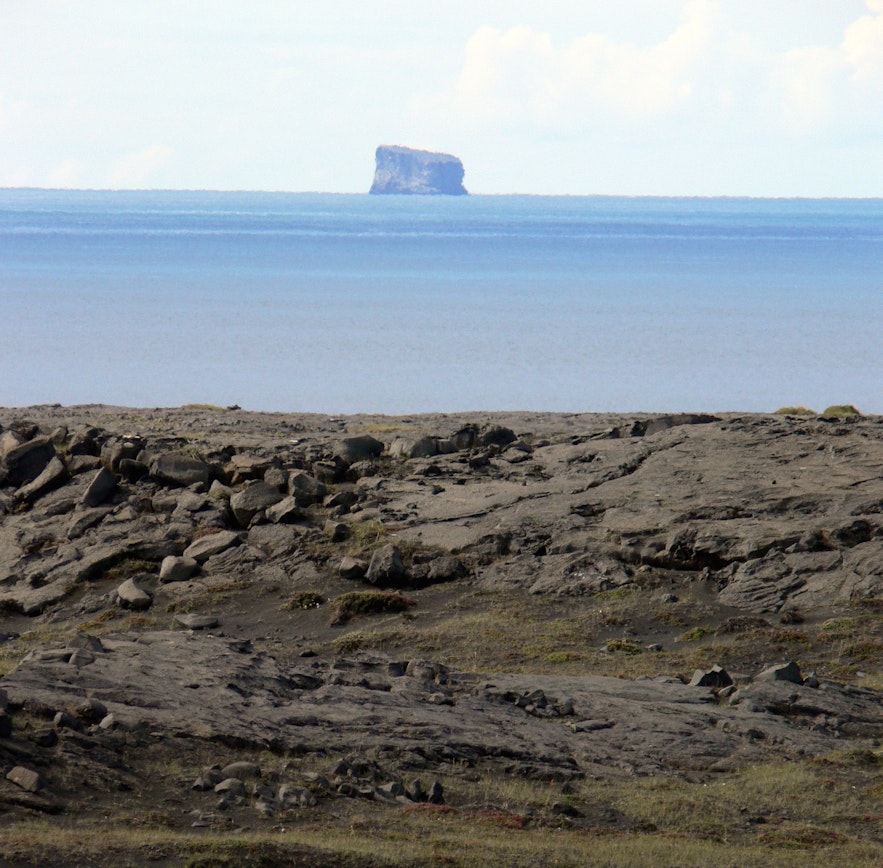 All of these locations are worth a look, especially for anyone on a self-drive tour around Reykjanes. Brimketill is high on my list of local recommendations, just because of its dramatic location, and the way it changes with the conditions around it. Like most of the other places on the peninsula, it is more accessible during summer; but for those who are sure on their feet and responsible regarding the dangers of the cliff, the whitewater cauldron warrants a visit all the year round.

Brimketill is located on the south side of the Reykjanes peninsula, about 10 km west of Grindavík town on Route 425. Several smaller roads are going down to the ocean; the one which leads to Brimketill has a small, wooden sign saying the site's name. It is not very obvious and does not appear on all GPS systems, though, so at the 10km mark keep a sharp eye out. This will take you to a car park, where you can walk over to Brimketill. A path is being built over the rocky terrain, hopefully to be ready for summer, but we have no confirmation on a date. 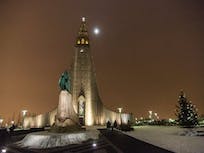