Looking across the rugged, desolate lava fields, to the angry, churning waters of the Atlantic Ocean, it is hard to believe that anyone could have lived at Selatangar. Yet from the middle ages to the late 19th Century, this stretch of beach was a popular hub during the region’s fishing season.

As the nation started to industrialise, it was deserted, and the buildings that remained fell into disrepair; all that is left now are some crumbling ruins hidden amongst the rugged terrain, making it a haunting yet somehow bewitching location.

I visited Selatangar with my fellow blogger Regína, her husband and her father-in-law in February. Like the other places we were heading to that day, the bird cliffs known as Krísuvíkurbjarg and the coastal pool of Brimketill, it was quite difficult to access due to the amount of snow and rough weather; therefore, I only recommend planning a trip here in the summer months.

The terrain all around the path is part of a dramatic lava field, riddled with cracks, little caves, and jutting rocks; with the snow obscuring the ground, it made navigating the area a challenging experience that many could struggle with. 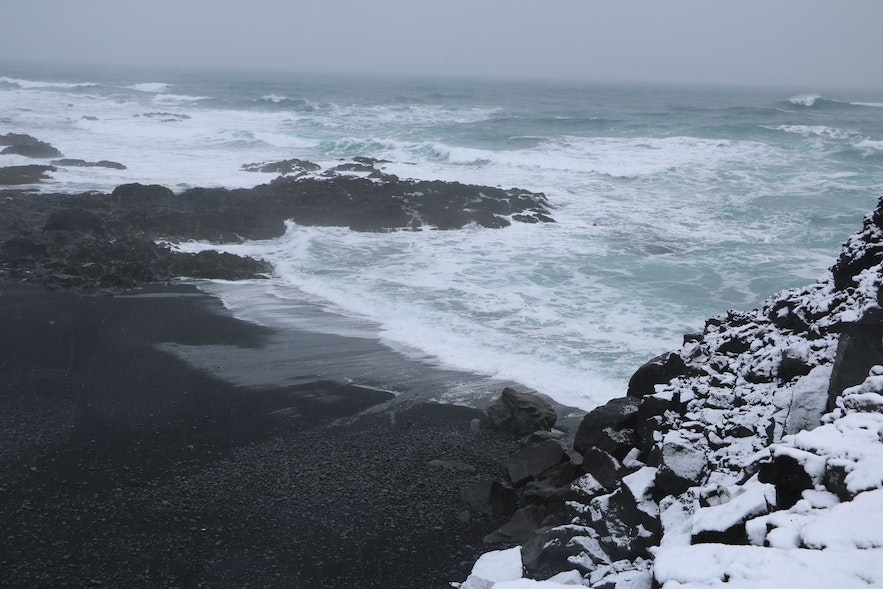 The lava field is very impressive, however. It reminded me of Dimmuborgir in the Lake Mývatn region of North Iceland, known as ‘the Dark Fortress’ because of the strange, towering formations of the lava rock there.

These dramatic shapes can be admired from the path, and it's unwise to leave it to try and get closer; visitors to Iceland should always avoid walking on lava, both for their safety and for the protection of the valuable moss that covers it. Much of the Reykjanes peninsula consists of a similar terrain since the continental rift runs right across it; this causes the spectacular geothermal areas and many volcanoes the region is known for.

As we took the path towards where the crashing waves met the jagged rocks, we worried that, under all the snow, we would struggle to find any of the remains of old settlements. As it turned out, they were still intact enough to be obvious amongst the landscape. We first came across a roofless structure built from blocks of lava, which would be barely large enough to lay down in; from its vantage point, we could see several more structures like it.

We walked up to each of them, and though a few were slightly bigger than the first, none of them seemed at all fit for any kind of habitation. 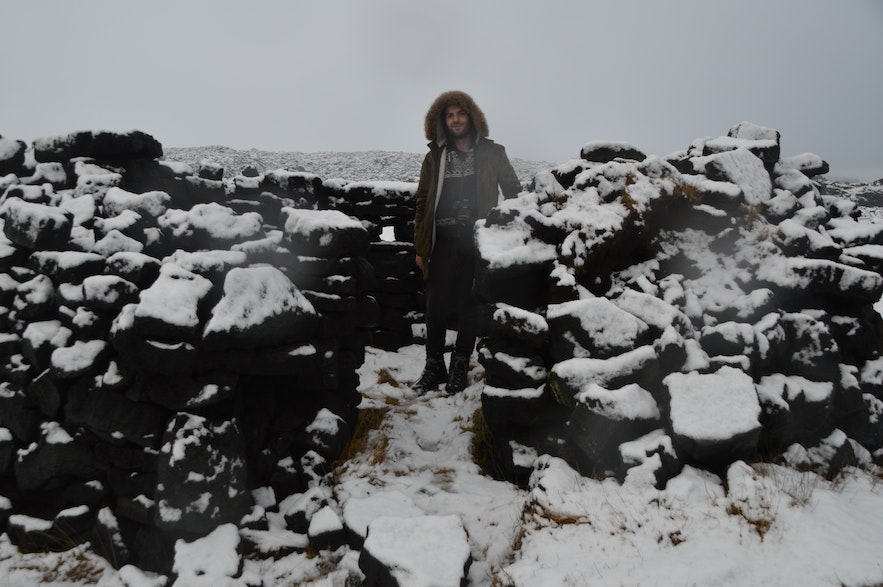 And yet, that is what they were used for. From March to May, for over half a millennium, fishermen would flock here to harvest the bounties of the ocean, storing their equipment and resting in these tiny little huts. The fishing must have been absolutely incredible, as nothing else about the area has any homely appeal. It is beautiful for a visit, but to live there would have been incredibly treacherous.

The jagged landscape and total exposure to the elements would have been difficult enough, but the area is also extremely vulnerable to the waves crashing against the shore. Driftwood litters the beach, in some cases at least a hundred of metres from the coast; it could only have gotten there from freakishly large waves and a dramatic range of tidal patterns.

Keeping in mind that in Icelandic springtime violent storms are extremely common, it’s almost unimaginable that anyone could feel safe sleeping anywhere near here. To take a boat from the hazardous shore and back again each day is completely unimaginable.

For obvious reasons, people do not live in the area anymore. Since Selatangar was deserted, however, it has been plagued with rumours that it is haunted by a malevolent spirit called Tanga Tómas. He has been sighted all throughout the 20th Century, and even if you consider such superstition as nonsense, you will be left in no doubt as to how the tale has persisted.

The skeletons of trees lay strewn across the rocks, the howling of the wind and crashing of the waves have somewhat organic sound, the lava twists into bizarre shapes and provides infinite places to hide; it is a very haunting place, even if you don’t believe that it is literally haunted.

As desolate as the region is, however, it is not completely devoid of life; as we walked down the path from hut to hut, we were following the footprints of some little animal who had taken the route before us. The lava field is full of cracks and holes for creatures to hide in, and several of the ones we saw had sets of tracks leading away from them.

We were hopeful to see an elusive Arctic Fox as the trail was still fresh and the prints about the right size; Regína and her husband, however, saw that the tracks were from a mink when they spotted it slipping into its burrow. 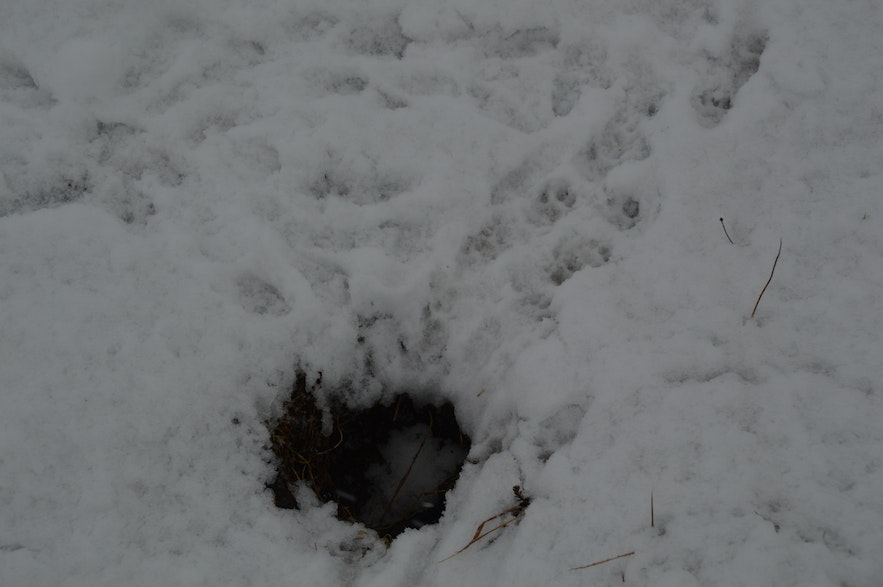 We ended up staying in the area for just over an hour; towards the end of our walk, the snow and rain stopped, and some milky sunshine started to break through the clouds. The last fifteen minutes were so pleasant that I resolved to come back in summer. With the snow gone, I do not imagine that the area loses any of its haunting, desolate charms. Rather, I expect it would simply be a lot easier to get to and traverse around.

Although the weather was clearing, we could not linger. It was time for us to move along to the third location on our list of unique places on the Reykjanes peninsula: Brimketill pool. 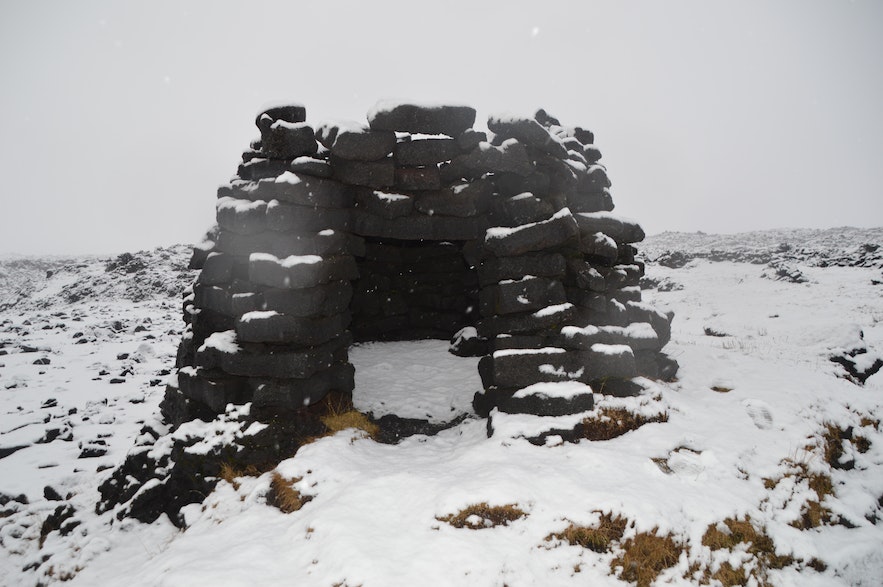 Selatangar is located on the south coast of the Reykjanes peninsula, about 14 km east of Grindavík town. From the road to Krísuvík, Route 42, follow Route 427. From here there is a trail to the area only passable by 4WD vehicles, with a sign post pointing to Selatangar. This will take you to a carpark with an information sign. The walk to the ruins Selatangar takes little over 15 minutes from there.