Skolavordustigur is a scenic pedestrian street in Reykjavik with some of the city’s best restaurants, bars, and shops.

Travelers exploring Iceland’s capital can easily visit Skolavordustigur because it lies in the city center. Tours like this four-hour private tour of Reykjavik and four-day northern lights self-drive tour of Iceland are flexible enough to accommodate a trip to the scenic street. If not, you could also go at your own pace as you explore with a 24-Hour Reykjavik City Card.

Skolavordustigur has many souvenir shops, cozy cafes, and second-hand vintage stores. Tourists and locals can shop here on a budget and taste the best of Iceland’s cuisine.

Photo from Wikimedia, Creative Commons, by Steven Lek. No edits made.

Skolavordustigur, written as Skólavörðustígur in Icelandic, is in Iceland's capital city of Reykjavik. The shopping and food street is just one mile (two kilometers) from Reykjavik Airport and 30 miles (48 kilometers) from Keflavik International Airport, making it accessible to local and foreign tourists.

If you’re staying in Reykjavik for your trip to Iceland, you don’t need a car to get to Skolavordustigur. Because Skolavordustigur is a pedestrian street, you can’t drive through it.

However, you can park nearby and walk through to find everything you need.

Skolavordustigur starts on the world-renowned Laugavegur shopping street and leads up to the iconic Hallgrimskirkja church.

This main road and its side streets are known for their international and local shops, restaurants, bars, galleries, and specialty stores.

Besides its excellent selection of shops, Skolavordustigur street is known for its unique appearance and cultural significance. A considerable portion of the pedestrian road is painted rainbow, making for stunning sightseeing and photo opportunity.

As such, it is also called the Reykjavik Rainbow Street.

Skolavordustigur leads up to the highest point in the city, Skolavorduholt hill. The name of this hill translates to School Cairn’s Hill.

The hill provides a great panoramic view of the beautiful capital and is also the location of some historic Icelandic landmarks, such as the statue of Leif Eiriksson.

Local art is an integral part of Iceland’s culture. Downtown Reykjavik, where Skolavordustigur street is located, is home to some of the most significant annual events and best Icelandic festivals that showcase local Icelandic culture and artists.

Reykjavik Pride is the reason the road in Skolavordustigur is painted with rainbow colors, made permanent just recently.

The street also has regular public exhibitions of local and international work.

What to Do in Skolavordustigur

The bustling street life in Reykavik’s Rainbow Street makes it an excellent place to dine, drink, shop, and even stay while visiting Iceland's beautiful capital.

Dining in Skolavordustigur and Laugavegur

Vegan and vegetarian options have been increasing in Iceland for years, and Skolavordustigur is close to many such restaurants. Mama Reykjavik is particularly notable, sitting on the northern corner.

Meat eaters, however, will also find plenty of places to satisfy their cravings, particularly if seeking traditional dishes such as lamb and fish. Sjavargrillid is a good example for those seeking the latter.

If you’re casually taking a stroll down Skolavordustigur, you may be overwhelmed by all your options. The best restaurants in Reykjavik guide can help you weigh your choices.

Those more interested in nightlife than fine dining will also find plenty of options on and near Skolavordustigur, notably at the thriving Cafe Babalu. This guided 3-Hour Reykjavik bar tour takes you from one bar to the next with a local who can show you their favourites.

When in Iceland, stopping by the pedestrian street of Skolavordustigur is a must if you want to find the best specialty and retail stores to get souvenirs and local items.

For example, The Viking is one of the popular stores in downtown Reykjavik, where you can buy souvenirs such as mugs, magnets, classic literature, and toy puffins.

Likewise, there is also a dedicated store in the area for music lovers. Smekkleysa is a record shop featuring local and international artists.

There are many accommodations near Skolavordustigur, depending on your budget and the amenities you’re looking for or need. For example, the Thor Guesthouse, Odinn Reykjavik Skolavordustigur Apartments, and Hotel Leifur Eiriksson are just a few meters from the center of the street.

Attractions and Activities Near Skolavordustigur

The closest landmark and attraction in the scenic street is the Hallgrimskirkja church. You can even view the church while strolling along the rainbow road. However, it’s best to explore the attraction up close to see its stunning architecture.

In particular, the basalt columns of Svartifoss waterfall in Vatnajokull National Park were said to have inspired the church’s unique structure. Its overall shape resemble's Thor's hammer turned upside down. 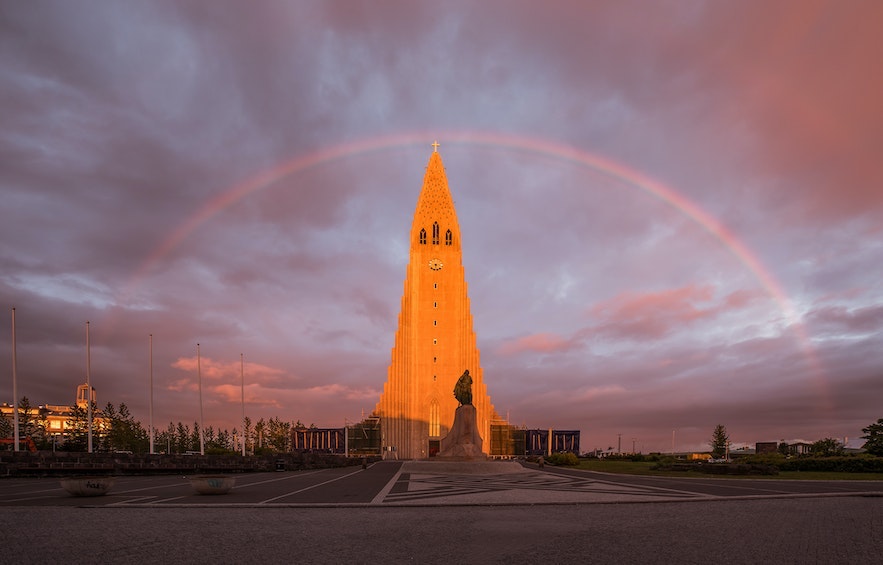 You can ascend the clock tower for a small fee to experience some amazing views.

The Old Harbor of Reykjavik is half-a-mile (800 meters) from Skolavordustigur, from which you may join whale-watching tours in Reykjavik. The large bay of Faxafloi faces Reykjavik, making whale and puffin watching extremely popular in the area.

By joining whale-watching tours such as this affordable 3-Hour whale watching boat tour and whale watching and Whales of Iceland Exhibition combo tour, you will have a high chance of seeing a spectacular show of the gentle giants of the ocean.

The harbor is right beside two other major Reykjavik attractions, the Harpa Concert Hall and the Sun Voyager statue.

The downtown area of the capital is approximately the same distance from Skolavordustigur as these sites.