Historic Spots in Reykjavík That You Probably Don't Know About

Reykjavík is studded with monuments and art pieces that either commemorate founders and leaders, or important events in Iceland. Despite this, unless you're sightseeing with a historian or a knowledgeable local, it’s easy to miss the less popular (but totally worth it) historical sights. So to broaden your knowledge of Iceland's history and culture, discover the historic spots in town that you probably have never heard of. 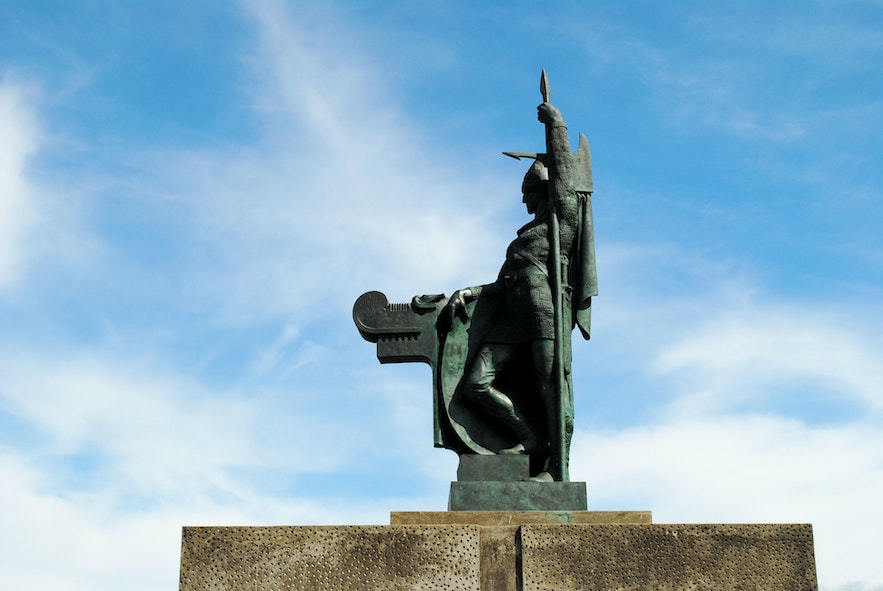 Arnarhóll is a grassy green hill in Reykjavík. At the top of the hill, the statue of Ingólfur Arnarson commemorates the first permanent Scandinavian settlers in Iceland. Arnarson landed in Iceland with his crew around 874 A.D.

Created by the Icelandic sculptor Einar Jónsson in 1924, Ingólfur Arnarson stands by his high-seat pillar which is decorated with a dragon’s head. He holds his spear in his hand. According to The Icelandic Book of Settlements, when Arnarson saw Iceland, he threw his high-seat overboard for good luck. According to tradition, Arnarson then named the settlement "Reykjavík" or "Smoky Bay" because of all the steam rising from the nearby hot springs.

The Arnarhóll hill is the perfect place to relax for a bit before doing some more sightseeing in Reykjavík. Enjoy the views of the Old Town and marina. Old Town is a small neighborhood in the center of the capital between the harbour and Lake Tjörnin.

Aside from the prominent statue, there are many other important historic buildings nearby including the Central Bank of Iceland, the National Theater, and the Culture House.

Related: 8 Things To Do in Reykjavik For Under $15

In front of Hallgrímskirkja church stands the first European to arrive in America - Leif Eriksson. Preceding Christopher Columbus’ voyage by 1,000 years, Leif Eriksson is one of the first sons of Iceland to explore the North Americas.

The statue was a gift from the U.S. to celebrate the 1,000 year anniversary of Iceland’s parliament. It's one of the most photographed attractions in Reykjavík. There's an identical statue in Newport News, Virginia. But you can also find other statues of Leif Eriksson across the U.S. in Boston, Seattle, and Milwaukee.

Fun fact, this was the only statue in Reykjavík to have had permanent night guards protecting it. Another fun fact, the Leif Eriksson statue was erected 13 years before construction started for Hallgrímskirkja church.

By the way, the views from the top of Hallgrímskirkja are breathtaking! 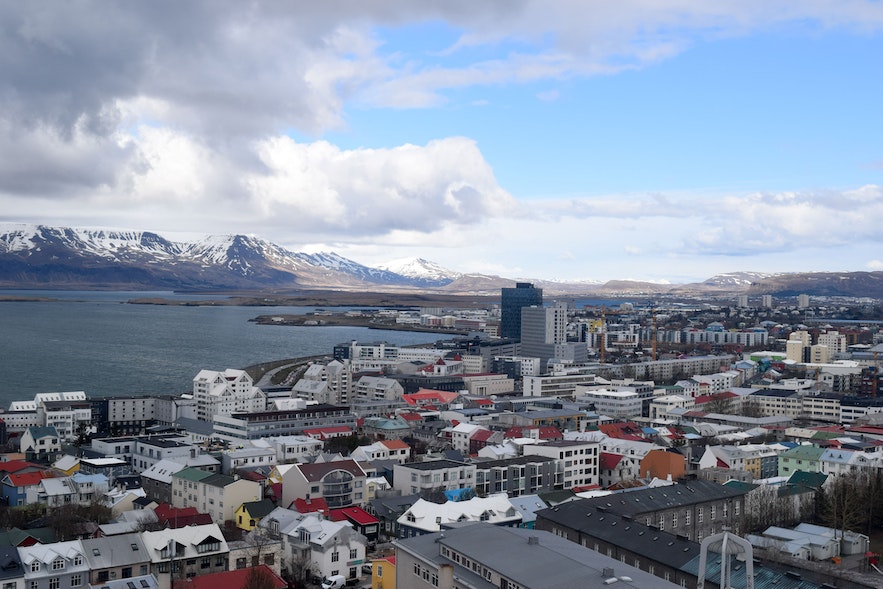 Constructed by Spanish artist Santiago Sierra, The Black Cone Monument of Civil Disobedience is a massive six-foot piece of rock that sits right outside of the House of Parliament in Reykjavík.

It has a large crack that runs down the middle. The crack splits the boulder in two.

The monument first premiered in front of the Parliament in January of 2012 where Sierra cracked the rock with a black cone. It commemorates the third anniversary of protests after the economic crash in 2008.

Similar to most monuments that remind people of a nation’s tumultuous past, Sierra’s monument was extremely controversial. Nevertheless, many see it as a positive connection between art and civil disobedience - both necessary for society. 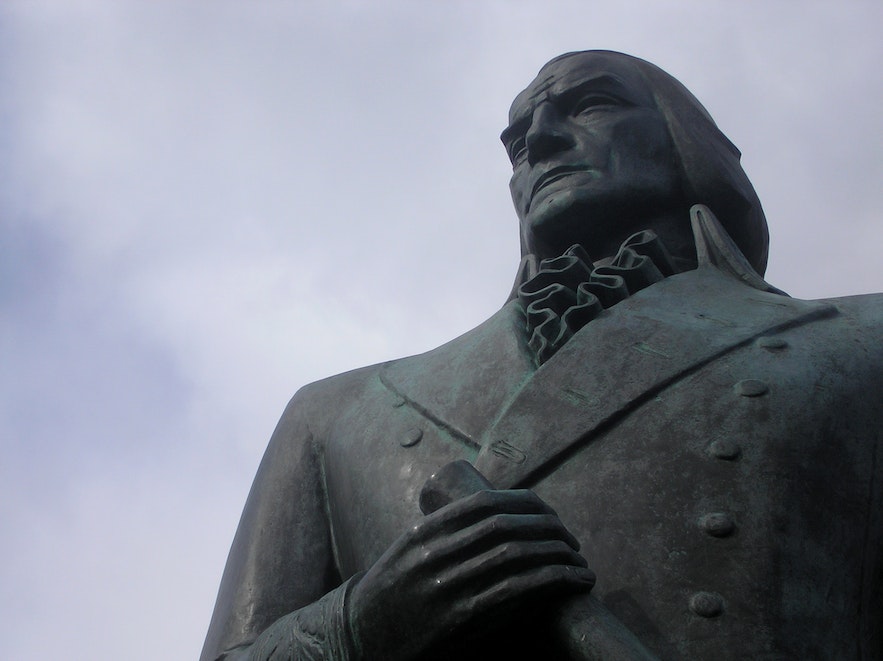 Despite having multiple names, Fógetagarður Square is named after the “founder of modern Reykjavík, Skúli Magnússon”. This bronze statue depicts a proud Skúli Magnússon holding a rolled up scroll.

Magnússon was the first Icelander to become Treasurer. He also created the wool industry which led to the urban development of Reykjavík. 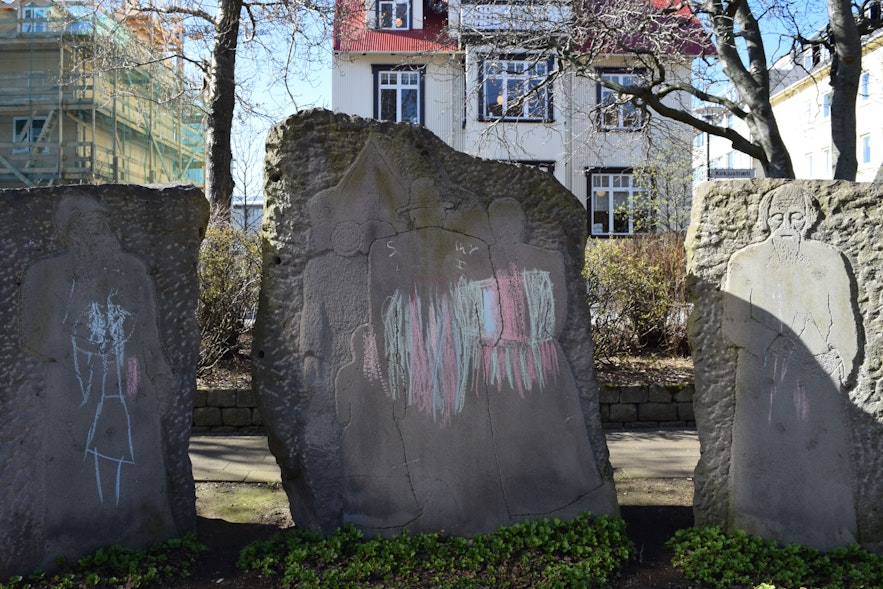 Fógetagarður Square is rich with history.

This now public space used to be the home of the old Reykjavík church. It was also the site of Reykjavík’s oldest cemetery. The cemetery closed in 1838 and the church was replaced with the Reykjavík Cathedral in 1796. You'll also find the oldest tree in Reykjavík, a Swedish whitebeam here.

Lastly, every Saturday during July and August, the square transforms into the Reykjavík Street Food Market named Krás. Well-known restaurants serve delicious bites and refreshing drinks at the market.

Just outside of Reykjavík, take a short ferry ride to the island of Viðey.

With over 1,000 years of history, Viðey is a cultural and historical hub - both modern and ancient.

The island houses ancient ruins and one of the oldest churches in the country. You can also find Videyjarstofa, the first stone building in Iceland here. It dates back to 1755. Back in the 18th and 19th century, stone was luxurious in Iceland.

The landmark Imagine Peace Tower is the latest addition to the island by artist Yoko Ono. It’s a beacon of light that celebrates John Lennon. The memorial is lit from October 9th to December 8th (John Lennon’s birthday and death).

Enjoy the island's natural scenery by biking or walking the hiking paths. No matter which path you take, you’ll be blown away by views of the mainland. From Viðey you can even see the outline of the Snæfellsnes Peninsula.