Learn all about the history of Iceland by exploring a recreation of an early Viking settlement called the Viking Village.

Visit the Viking Village film set on a self-drive tour of East Iceland attractions, like the 11-Day Road Tour with Eastfjords or this 1-Week Summer Tour of the Ring Road. Travelers may also rent a car to explore the area at a better and more personalized pace.

Dramatic sceneries of picturesque landscapes and grasslands surround the Viking Village at the foot of Mount Vestrahorn. These stunning views complementing the authentic-looking set will give guests a one-of-a-kind Icelandic experience.

About the Viking Village Film Set

Location and History of the Icelandic Village

The Viking Village film set is located on a local farmer’s property in southeastern Iceland, near the charming fishing towns of Hofn and Hornafjordur.

The village is a replica of an authentic Viking village, created as a movie set for a Universal Studios production. However, the show scrapped it as a filming location for budgetary reasons. Since then, the area has been open for curious visitors to explore at their leisure.

In 2018, the same movie company acquired the rights to produce Vikingr, a movie about early Vikings and Icelandic adventures. The film used the village as one of its sets. More recently, Netflix announced that their series, The Witcher, would use the Viking Village film set and other Eastfjords attractions in filming the show’s prequel, Blood Origins.

Features of the Viking Village

This East Iceland attraction features wooden structures with grass roofs, much like the traditional Icelandic homes called turf houses. These houses have intricately carved door frames with Viking designs and a dungeon set at the base of a constructed boulder.

Here you can learn by actually seeing how the Vikings constructed their buildings and feel the effects of what a grass roof does inside of a house. The intricacy and details of the building construction and carvings make this Icelandic landmark a place for education.

The village lies between the ocean and the towering mountains, bringing dramatic weather patterns for special photography sessions. The unpredictable weather in Iceland has added a worn look to the buildings, heightening their authenticity.

Those traveling during the summer months with prolonged daylight hours can easily fit this lesser-known Icelandic attraction into their explorations, especially if black sand beaches are also on your sightseeing list.

The Viking Village film set is open year-round. The same family who owns the land and village also operates a cafe in the area, where you can pay the small entrance fee for the attraction. 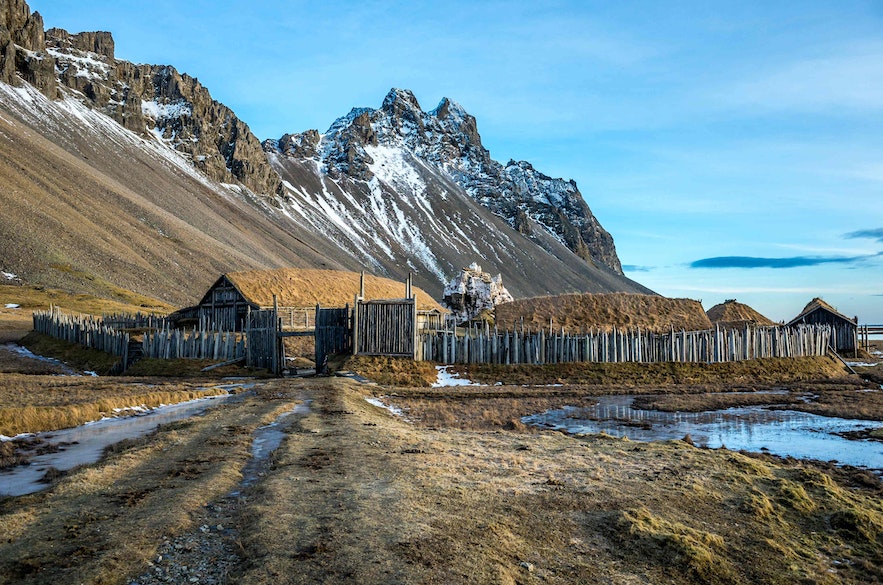 Photo from Wikimedia, Creative Commons, by Sergejf. No edits made.

How To Get to the Viking Village Set of Iceland

The Viking village set is in southeast Iceland and is a noteworthy ring road attraction. Although it is not directly on the path of Route 1, the film set is easy to explore when road tripping in Iceland.

The Viking Village lies 60 miles (97 kilometers) southwest of Djupivogur and 10.5 miles (17 kilometers) east of Hofn. You’ll need to drive 289 miles (465 kilometers) east if coming from Reykjavik, so consider a multi-day road trip or tour to see this inspiring place.

Once you arrive at the Viking Cafe near the Stokksnes peninsula, it’s a ten-minute walk on a flat road to get to the Viking Village film set. The path is level and easy to navigate but is made of gravel, so those with knee problems or trouble walking may prefer hiking poles for this portion of the trip.

After a short walk through lush pastures with grazing horses on one side and the massive, jagged Vatnajokull glacier on the other, you’ll arrive at your beautiful destination.

Iceland is a picturesque destination year-round, but the best time to visit the Viking Village film set and other Eastfjords attractions is during the summer season.

Iceland is close to the Arctic Circle and gets about 20 hours of daylight every day between June and August. The extended daylight during the summer, called the midnight sun, works in a visitor’s favor. With more sunlight, you have more time to explore the natural wonders of Iceland, including the Viking Village movie set.

Bear in mind that summer is the busy travel season in Iceland. The pleasant weather and longer days bring larger crowds during this season.

On the other hand, Iceland only gets about four to five hours of daylight during the winter. This may disadvantage those not comfortable driving in the snow surrounded by the black of night.

However, wintertime offers ample opportunities to see the aurora borealis light up the sky. For example, if you want to be in the authentic-looking Viking Village as the northern lights paint colors across the skies, visit the film set during winter.

Nearby Attractions from the Viking Village

Visit the Viking Village film set while exploring other incredible Eastfjords attractions nearby. This region of Iceland has breathtaking tourist spots you wouldn’t want to miss.

Fauskasandur is another black sand beach close by that you can pair with a visit to the prop set. Fauskasandur is 33 miles (54 kilometers) northeast of the attraction along Route 1. 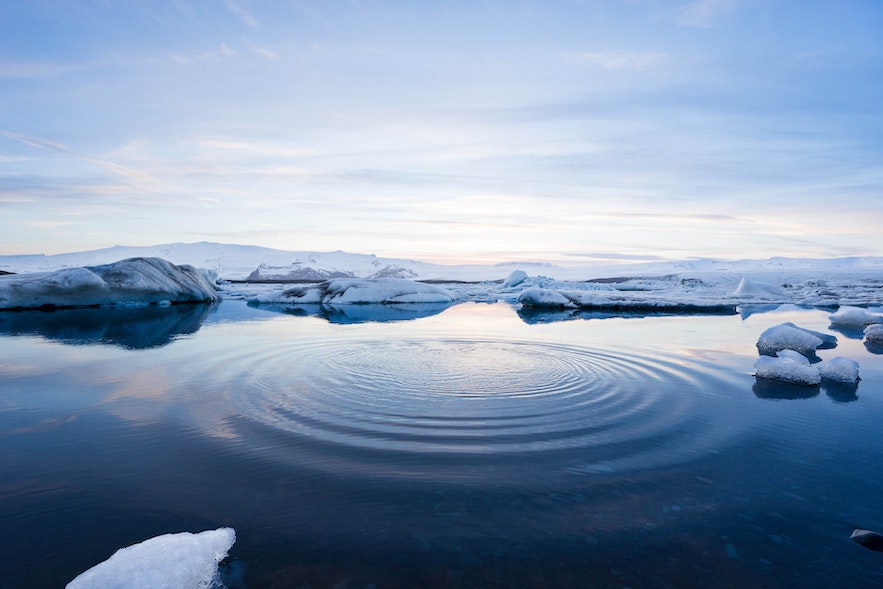 Meanwhile, not far from here is the breathtaking Jokulsarlon glacier lagoon. This Icelandic glacier lagoon is one of the most popular attractions in the Nordic country, known for its thousands of floating icebergs. You can see the attraction on day tours or multi-day adventures, such as this 14-Hour South Coast Tour from Reykjavik.

Hofn is the nearest town to the Viking village film set with the most residents, shops, and cafes, 10.5 miles (17 kilometres) away.

The town is the largest settlement on this stretch of Route 1, with around 2,500 residents. If you’re exploring the Eastfjords for multiple days, you can stop by the town for supplies and overnight accommodation. Guests can stay at Hofn Guesthouse or Hotel Edda Hofn.

The other nearest settlement to the Viking Village is Djupivogur. Djupivogur is north of the film set and along the eastern coast of Iceland. This picturesque town on a fjord has a rich history and stunning landscapes worth checking out if you’re already nearby.

Spend as much time as you desire at each location by renting a car or joining a tour to visit these attractions along Iceland’s eastern coast.

Preparing for your trip to Iceland will make your adventure safer and more convenient. You may consider including the following things to pack on your visit.

With these handy items in your exploration bag, you’re ready to explore the Viking Village film set and the land of fire and ice.