The 5 day National park special including Golden Circle, South Coast & Snæfellsnes tours covers all the major attractions of those areas with some amazing activities included. Check out our 5 day expedition of our nature of fire and ice that should fit groups and solo travelers alike.

The first day starting from Reykjavik includes waterfalls Barnafoss and Hraunfossar. From the you will be heading to Snæfellsnes peninsula where you will find sights like the entrance to the center of the earth at Snæfellsjökull, the famous mountain Kirkjufell which Game of Thrones fans will be excited about and the awesome landscapes with lave fields and black sand beaches. You will also have a chance to spot the northern lights if you are lucky with the weather.

Continuing the trip of amazing sights you will visit places such as Gullfoss waterfall, Geysir geothermal area, Thingvellir National Park and Kerid crater. The Golden circle is the most famous route in Iceland and its diverse landscapes and rich history will not fail to impress, to make it even better we will make a stop at a local farm to enjoy some home made ice cream

Iceland is known for the endless numbers of waterfalls around the country. You will get a chance to see many of them in this tour, Skógafoss and Seljalandsfoss waterfalls will be visited when you head towards the south coast. A glacier hike in Skaftafell in Vatnajökull National Park is included with the guidance from our highly trained glacier guides. Even further east you will stop at Jökulsárlón glacier lagoon and the beautiful Diamond beach next to it with a view of the largest glacier in Europe, Vatnajökull.

And then to top everything off there is the blue ice cave, our experienced guides will take you to explore an ice cave in the largest glacier in Europe, Vatnajökull which most people never get a chance to see in their lifetimes, making it a very special experience, open the calendar to see the dates available and join us on an exploration of the south  and west of Iceland

Professional and fun English speaking guide Glacier hiking with a certified guide.
Mini-bus with Wi-Fi on board Icelandic music played on board
4 nights of accommodation in a 3 star hotel with breakfast and private bathroom included 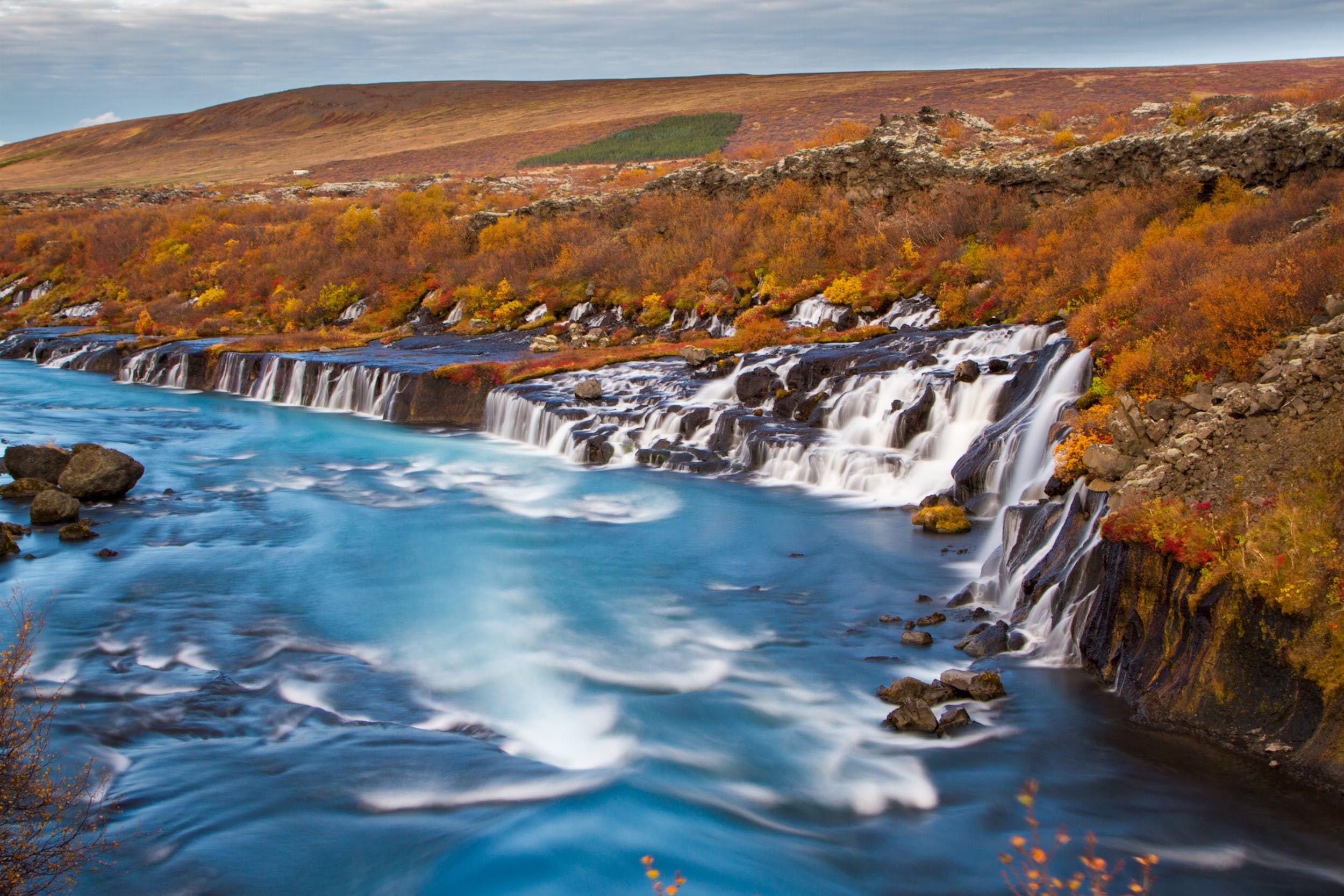 To start the adventure we head to West Iceland, Borgarfjörður has everything, waterfalls, dark lava fields and caves, black sand beaches and the mighty Snæfellsjökull glacier in the distance.

Leaving from Reykjavik where the guide will pick you up you will start by driving past the Esja mountain which is one of the best viewing spots of Reykjavik, after that you will continue through a tunnel taking you under Hvalfjörður, which translates to the "whale fjord" which is rich in history with an abandoned naval base previously occupied by the British during WW2.

Then you will reach Borgarfjörður known for the settlements of Viking sailors and historical heritage.

The most powerful hot spring in Europe, Deildartunguhver waits for you near Reykholtsdalur valley and the village of Reykholt where Snorri Sturluson, a poet, historian and lawmaker lived during the middle ages spending most of his life writing of the invaluable records of the Old Norse language and mythology.

Driving through the dark lava fields, you will stop by the waterfalls Hraunsfossar and Barnafoss with its amazing blue colour coming through the narrow ravine.

The night will be spent in the area, and hopefully, there will be a clear sky so a chance of spotting the northern lights will present itself. 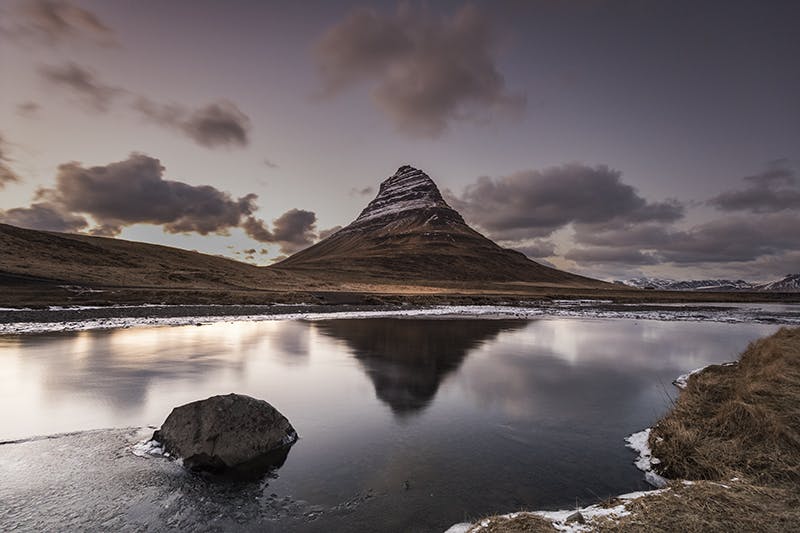 Day 2 - Snæfellsnes Peninsula with a touch of Game of Thrones

Snæfellsjökull is the towering glacier in the west that you will be circling today, heading around the peninsula you will visit locations like Gerðuberg Cliff, a large basalt column wall. Then one of the few white sand beaches in Iceland awaits you at Ytri-Tunga, most beaches in Iceland are black, so this one is a little special.

You will see some small villages like Arnarstapi which is surrounded by lava pillars and basalt ravines along the coast of the Atlantic Ocean where the powerful waves crash against the arch rock Gatklettur. You will also see a black pebble beach called Djúpalónssandur after a trek through a field of lava pillars and rocks, reaching the beach where you can take in all the different features of this special location.

Following the adventures of Professor Otto Lidenbrok and his uncle Axel you will journey in the volcanic tubes as if you are heading into the centre of the earth in the novel by Jules Verne, the lava cave Vatnshellir is a great experience formed over 8,000 years ago.

After that the famous mountain Kirkjufell awaits which should interest the Game of Thrones fans especially as it has been featured in the popular series, the mountain is a beautiful site and can not be missed on any tour around the peninsula.

Before heading back to the capital, you will drive through Hraunsfjörður and the dark lava field of Berserkjahraun and if the sky is dark, remember to keep a lookout for the northern lights along the way back. 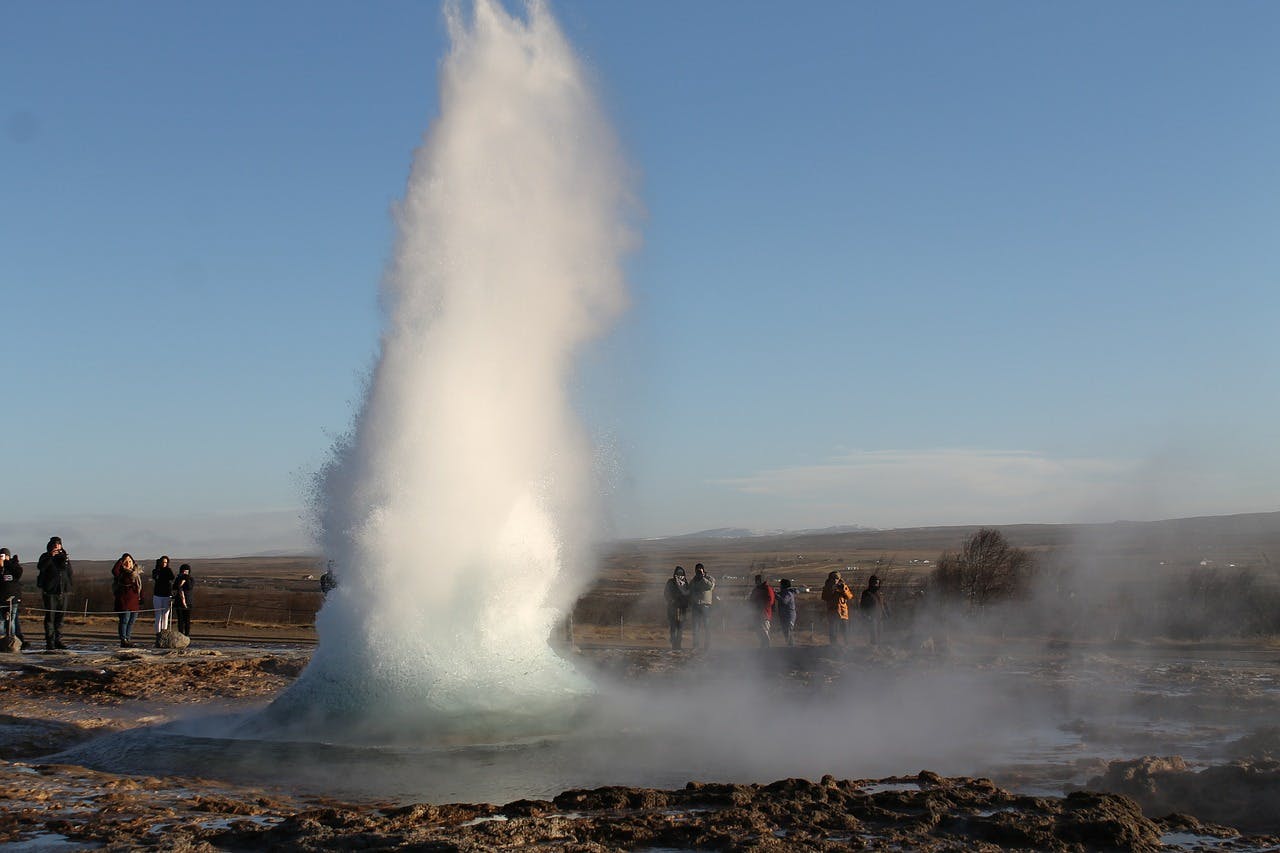 On the third day, you will head into the Golden Circle, where you will see amazing sights, including geothermal areas, waterfalls, and our favourite locals.

The Þingvellir national park has a great variety of fish and birdlife around the largest natural freshwater lake in Iceland; it is also where the two tectonic plates, the Eurasian and North American are moving apart from each other slowly making it a great location to enjoy the beautiful view of this massive geographic activity.

It is also rich in history as it is the place where the Icelanders founded the first parliament in 930 a.d, and the chieftains met each summer annually. The name of the park "Thingvellir" even translates into "Parliament Plains".

Continuing with the amazing geography and geology you will head to the Geysir Geothermal area which has hundreds of colorful hot springs along with two geysers which erupt, the larger one is called "Geysir" and erupts very seldom but the other is called "Strokkur" and that erupts approximately every 5 minutes up to 40 meters high into the air making it a great spectacle.

The next stop is the Gullfoss waterfall which falls into a deep canyon not far from the Geysir area, On a sunny day you can see the source of the river that is created from the melting water from Langjökull glacier creating the majestic "Golden Falls". You can also expect to see a rainbow in the mist of the waterfall if the sun is out.

We will also stop at a family-run farm where they breed cattle and create their own tasty fresh dairy products on location, you will have a chance to pet some of the friendly animals and a taste of their ice cream will be included as a part of the trip as well to make it an even greater experience.

Another small stop along the way is the volcanic crater Kerid that formed in an eruption 3,000 years ago, another great location to learn about the Icelandic geological history at yet another natural wonder.

In the ends of the day you will head to the hotel near Hvolsvöllur and who knows, perhaps the northern lights will make an appearance to make the day perfect. The south coast has a lot of beautiful waterfalls, and we will start with one which you can walk behind, Seljalandsfoss. Make sure to have a raincoat as the short hike behind the waterfall will get you wet, but the views are completely worth it. A perfect spot for that important Instagram post of the day

The next stop is the powerful waterfall Skógafoss, tumbling down a 60 meter high cliff in a little gorge it is an incredible sight, the staircase next to the waterfall will take you all the way to the top where you can enjoy the views of the coastline and mountain range, especially on a clear day, so the hike to the top is worth the effort to be able to enjoy the amazing views.

Make sure to keep your energy up as the next stop is the largest glacier in Europe and a hike with our highly trained glacier guides on one of the outlet glaciers that spawn from Vatnajökull glacier. We will gear you up with the safety equipment needed for the hike, helmets, harnesses along with crampons for the shoes and an ice axe making you feel like a proper adventurer on the glacier, the hike is approximately an hour and a half on the glacier. The area is called Skaftafell and has been used as a filming location for many Hollywood blockbusters and popular TV Shows as well, to mention a few such as Interstellar, James Bond and of course Game of Thrones.

The hotel for the evening located near the Jökulsárlón glacier lagoon will give another chance of seeing the aurora, weather permitting so keep your hopes up for cooperation from the weather Gods. 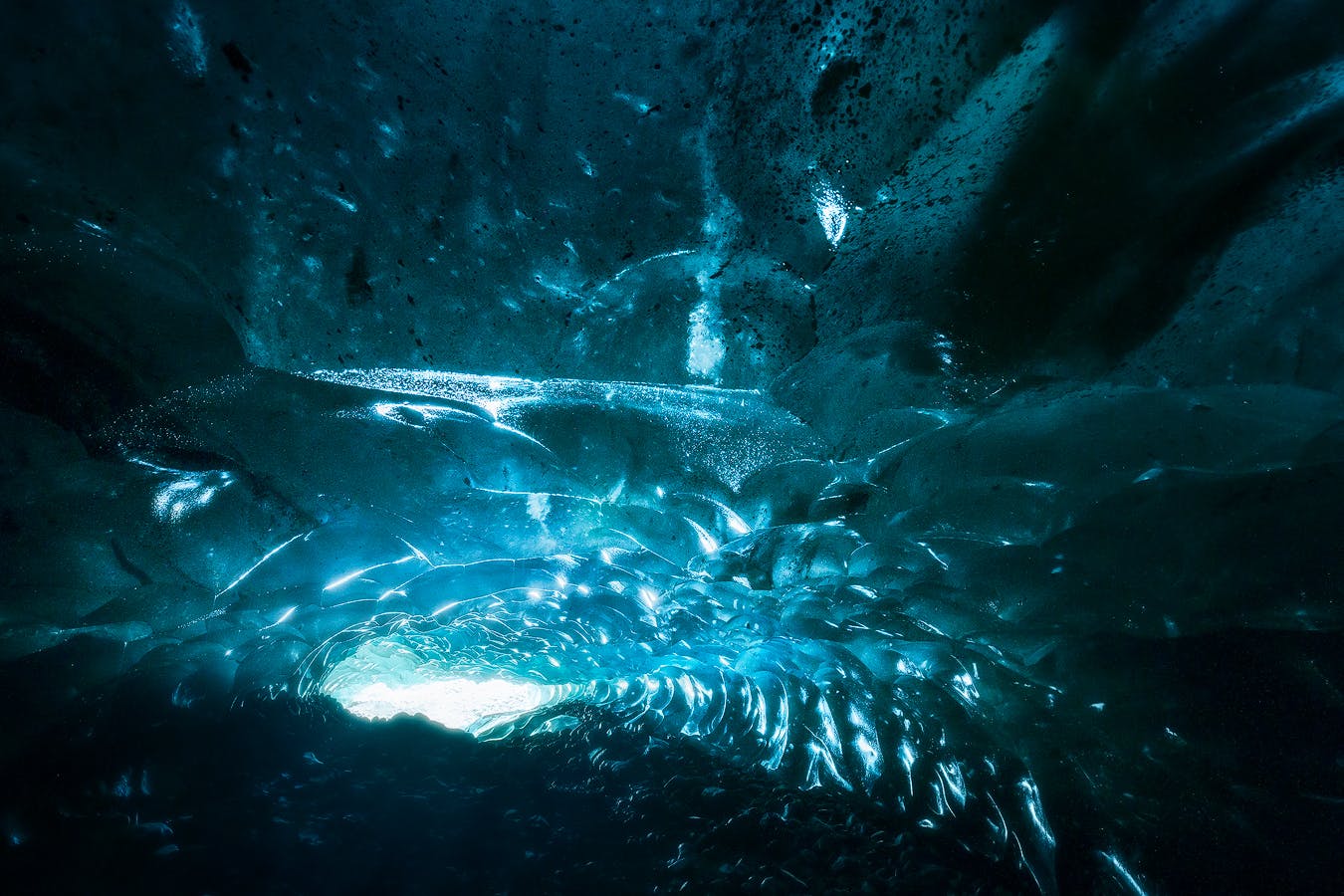 The amazing glacier lagoon Jökulsárlón awaits you today, the 200m deep glacial lagoon with the enormous icebergs coming from Breiðamerkurjökull, another outlet of Vatnajökull the largest glacier in Europe. The icebergs float in the lagoon making their way to the Atlantic ocean where some of them get thrown back into the beach where they look like diamonds on the black sand, sparkling in the daylight, in all shapes and sizes the icebergs get thrown around the beach until they break or head to sea.

The mix of colours and shapes make this another great spot to get that Instagram post of the day.

Going even closer to the glacier Breidamerkurjökull we will change to a super jeep and head to the glacier to explore the beautiful blue ice caves that form at the edge of the glacier itself; this natural occurrence requires a qualified guide and safety equipment which we provide for our travellers. The guides expertise regarding the glaciers and the ice caves make this a great exploration of a natural phenomenon.

On the way back to the city we will stop at the black sand beaches at Reynisfjara and witness the power of the Atlantic ocean as the waves hit the beach, remember to listen to your guide and not get too close to the water. The unique basalt columns in the cliffs above are amazingly beautiful but rough, and in the distance, Dyrhólaey stands out of the sea creating a perfect nesting ground for the puffins and other birds that come to lay their eggs in the summertime.

The adventure ends when your guide drops you off Reykjavík after the amazing day of sightseeing along the southern coastline of Iceland.

Outdoor clothes according to weather
Hiking boots (Available for rent)

Order or availability of attractions may change due to road or weather conditions.

The Northern Lights are a natural phenomenon and cannot be guaranteed by the operator. The hotels are in prime locations to maximize the chances of seeing them.

The limit is 24″ suitcase per person, and no multiple luggage allowed. If there is limited space in the car you might need to leave part of your luggage in our luggage storage, free of charge

We have to adjust timings to the short daylight and we always try to avoid big crowds.

You can bring some favourite snacks and beverages if you like.

We recommend you bring hiking boots with slip-resistant soles if you are visiting in the winter. Hiking boots are available at the time of booking.