Chart your own course on this fabulous self-drive tour of the quaint villages and magnificent landscape on the Snaefellsnes peninsula, and take a closer look at the mystical Snaefellsjokull glacier. You'll also visit the largest hot spring in Europe and can learn about Snorri Sturluson, Iceland's most famous historian and saga writer at the Snorrastofa Cultural Research Center in Reykholt.

Enjoy the unusual geology of the peninsula and walk the spectacular trails in Iceland. Impressive volcanic cliffs line the shore, filled with birds nesting. You can hike to the best photography spots or breathe the sea air on black beaches.

Choose some extra excursions, including exploring a lava tube cave, snorkeling in Silfra, or snowmobiling on Langjokull. You can even enter some man-made tunnels carved into the side of this glacier or unwind in the mineral-rich waters of the Blue Lagoon.

Tailor all your activities to your desires. When people think of Iceland, they imagine peaceful mornings hiking a glacier and snow drifting on the mountains, staying away from crowds of people.

We love Iceland too and want to share its secrets with you. On this tour, you can relax and be virtually alone in some of the hidden gems listed in the tailor-made itinerary you'll get as part of your vacation package.

Seize this chance to visit the Snaefellsnes peninsula and do as many extra activities as you like! Check availability by choosing a date. 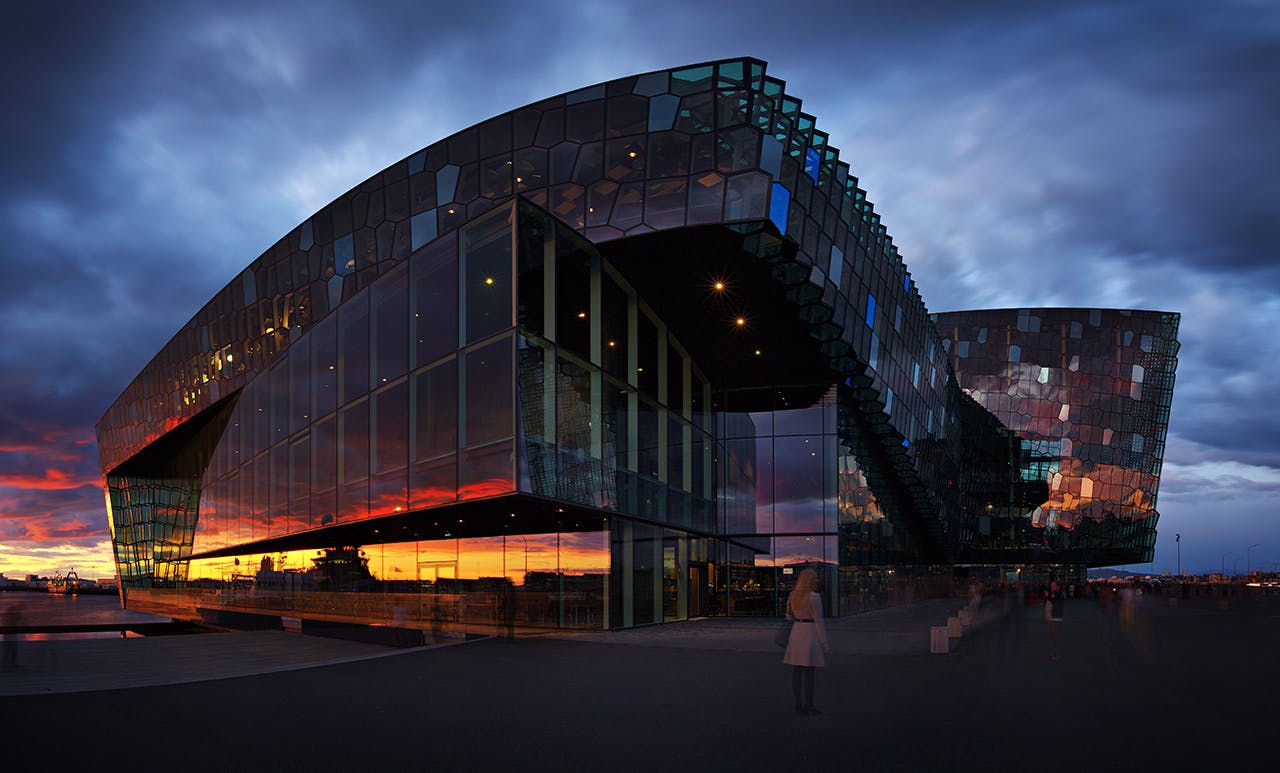 Pick up your car at Keflavik International Airport before driving to your accommodation in downtown Reykjavik.

On your way to Iceland's capital city, you could choose to make a stop at the Blue Lagoon. This world-renowned spa is known for its healing waters, vivid azure colors, and luxurious treatments. It is located in the middle of a moss-covered lava field, giving it an otherworldly atmosphere. If you add the Blue Lagoon, it will be arranged according to your flights. If there is no time to visit the lagoon today, it can be added to another day. Your travel consultant will be able to arrange this for you. There is still plenty to see and do in Reykjavik and the Reykjanes Peninsula if you have extra free time.

After settling in, the rest of the day is free for you to explore the vibrant capital, with its abundance of museums, restaurants, and bars to suit all tastes.

If you're interested in checking out Icelandic design or experiencing the city's thriving coffee culture, head to the main street, Laugavegur, and enjoy its various shops and cozy cafés.

Spend your first night in Reykjavik. 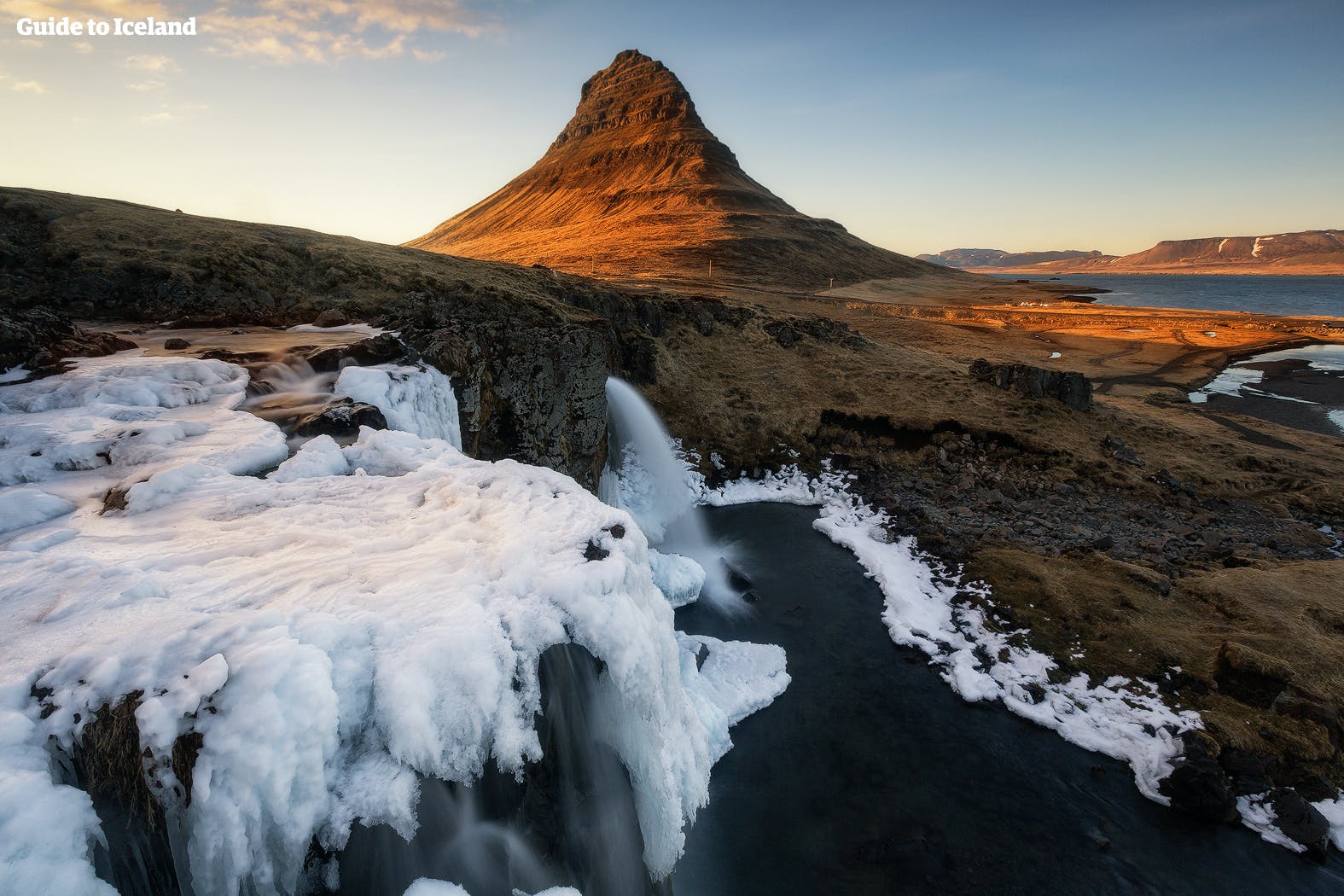 You will head to the Snaefellsnes peninsula and explore the picturesque mountains and various small villages via the many hiking trails and country tracks found there.

Make a stop at the hot spring area of Deildartunguhver, where hot water gushes from the ground at 207°F (97°C). Nearby, you'll find the beautiful Barnafoss and Hraunfossar waterfalls, which is a good place to stop for lunch before driving to the Snaefellsnes Peninsula.

You'll have the option to explore the stunning lava cave Vidgelmir or go inside an ice cave tunnel inside Langjokull glacier if you like.

Spend the day getting off the road and discovering rural Icelandic culture. For photography enthusiasts, a trip to the Snaefellsnes National Park is highly recommended, where there is some fantastic scenery, including the cone-shaped Kirkjufell Mountain. Spend the night on the Snaefellsnes peninsula. 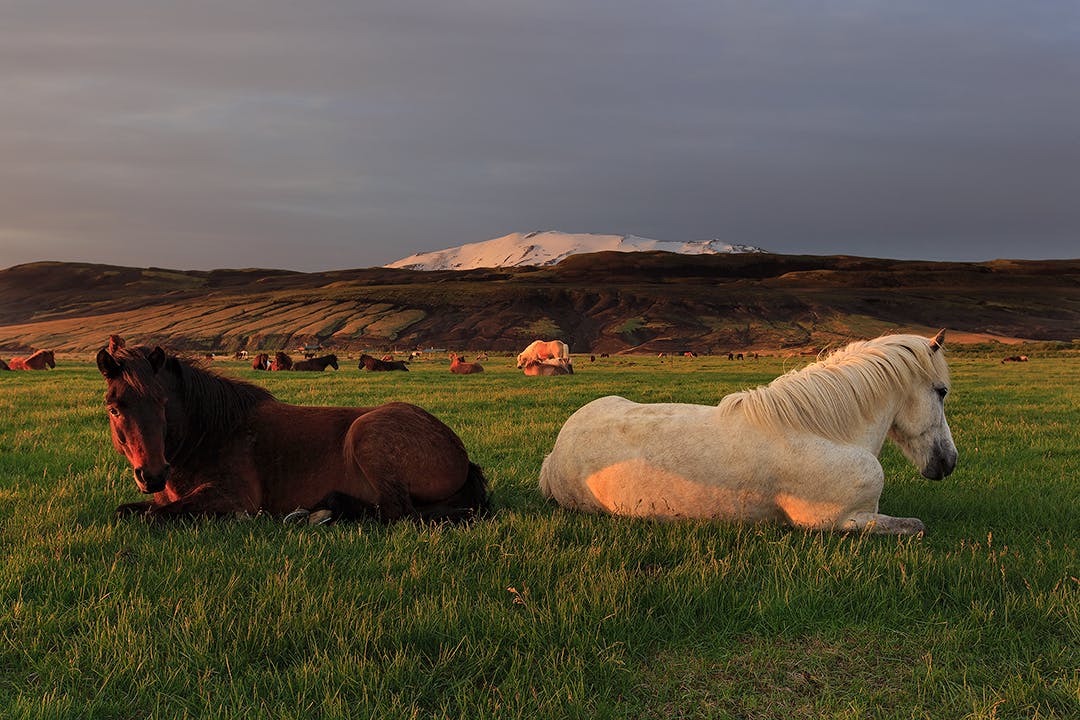 Truly experience all the wonders that the peninsula has to offer. Visit the magnificent Snaefellsjokull glacier, famed for its role in the Jules Verne novel 'Journey to the Centre of the Earth.' You can also look at the charming, historic towns dotted around, such as Budir, Hellnar, Arnastapi, and Stykkisholmur. There are a wealth of beaches, mountains, and geological rock formations, such as the Londrangar sea stacks, to admire. Take your time, and find the places that interest you.

Spend another peaceful night on the Snaefellsnes peninsula. 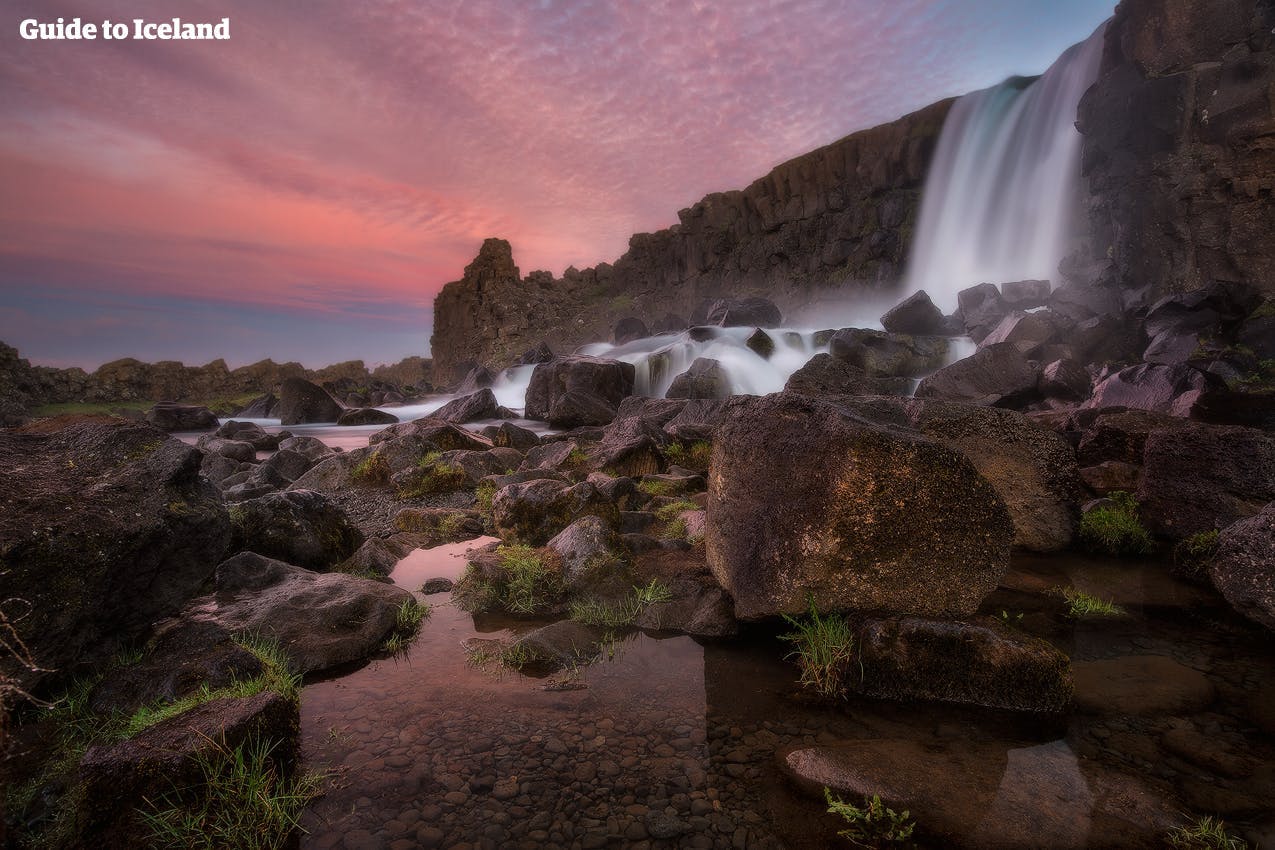 Today, you'll head south. You can opt to drive the Hvalfjordur fjord, which translates to the Fjord of the Whales, and is located only 45 minutes outside of Reykjavik. The fjord used to contain the primary whale hunting harbor and has since served as the base of both the British and American armies during World War II.

Hvalfjordur is also the home of Iceland's second-highest waterfall, Glymur, which towers at 650 ft (198 m) high, and is well worth the one-hour hike it takes to reach it during the summer.

After driving along this very scenic fjord, take a small detour to Thingvellir National Park, a UNESCO World Heritage Site. There you'll have the option to go snorkeling in one of the world's best dive sites, Silfra.

You will also have time to visit the rest of the Golden Circle attractions, such as the Geysir geothermal area, home of the gushing geyser Strokkur, and the magnificent Gullfoss Falls. If you did not choose to snorkel, you could opt for an exciting snowmobile tour from Gullfoss.

Once you have enjoyed your day, you will head back to Reykjavik for the last night of your trip. 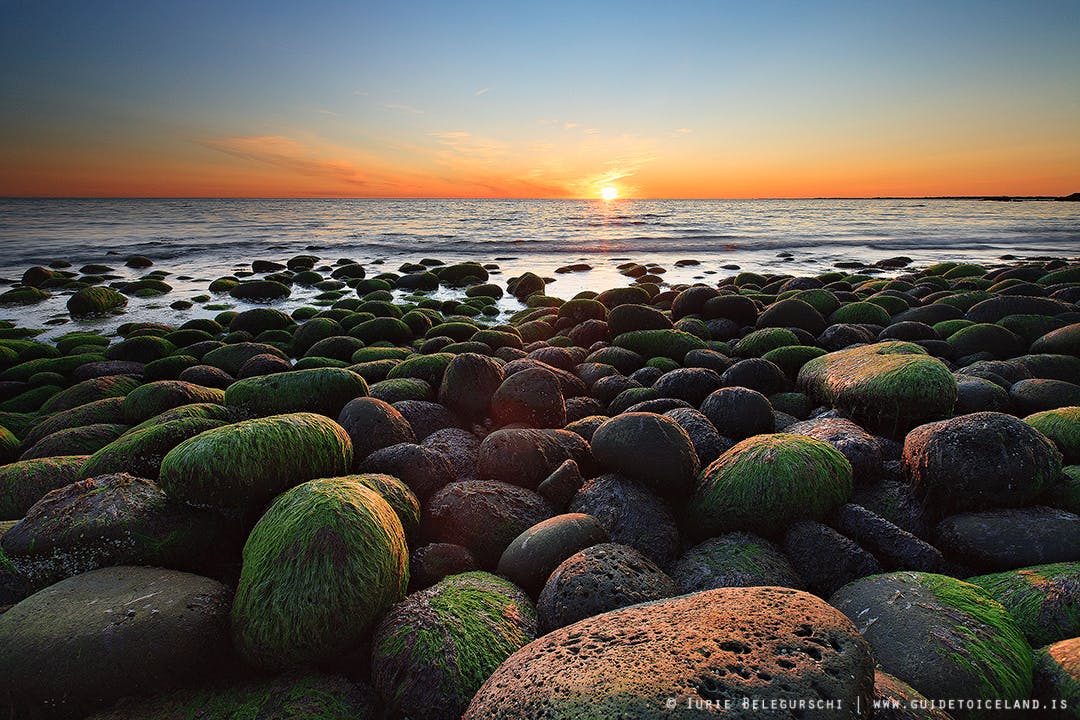 Drive to Keflavik airport and drop off your car there before your departure. For those who have a later flight and choose to visit the Blue Lagoon today, you will finish off your stay unwinding before you head to the airport. This is the perfect place to relax as you bathe in the warm, mineral-rich waters as you look back on the incredible adventure you have just taken in the land of fire and ice. If your flight is later, there are plenty of things to do in Reykjavik. If you have an early flight back home, we wish you a pleasant journey.

Self-drive tours begin either in Reykjavík City or at Keflavik International Airport. A valid driver's license is required, along with a one-year-long on-road experience. Please be aware that your itinerary may be rearranged to better fit with your arrival date and time.

Some optional activities might require you to have a valid driver's license, or you might need to send additional information to your travel planner. Please note that you might need to present medical documents should you choose to go snorkeling.

All our vehicles are new or current models, of maximum 2 years of age. Super Budget levels come with standard CDW insurance, while all other levels also include Gravel Protection (GP), and Super Collision Damage Waiver (SCDW) insurances. Please note that off-road driving is illegal for all types of cars.

All levels come equipped with a GPS and free Wi-fi. You can enjoy unlimited data with the Wi-Fi device, which can be connected to up to 10 devices at once. The car rental will provide 24-hour roadside emergency services.