Grab this chance to explore must-see destinations and the unique Icelandic Highlands on a 5-day road trip. This self-drive tour gives you the freedom to roam without having to worry about a group or tour guides.

You'll drive your rental car to visit Iceland's most famous attractions, including the Blue Lagoon and the Golden Circle, and get to know the incredible Icelandic Highlands, all at your own pace. All accommodations and a vehicle will be arranged prior to your arrival, so all you have to worry about is creating amazing memories.

On this tour, you'll take the road less traveled as you journey into the unforgettable highlands of Iceland. You'll drive through Kaldidalur Valley, a highland passage that has been used for centuries, and explore the Landmannalaugar area, which is renowned for its natural beauty. There you'll marvel at gems like the Laugahraun lava field and Ljotipollur crater lake.

In addition to the beautiful highlands, you'll drive up the diverse and beautiful South Coast of Iceland, stopping at landmarks like the waterfalls Seljalandsfoss Waterfall and Skogarfoss, Reynisfjara Black Sand Beach, and, of course, the famous Golden Circle.

There are also exciting additional activities available for you to adapt the journey to your preference. These extras include glacier hikes and snowmobile tours, and trips to geothermal spas such as the Blue Lagoon.

Don't hesitate. Now is your chance to have the experience of a lifetime on a road trip in Iceland! Check availability by choosing a date. 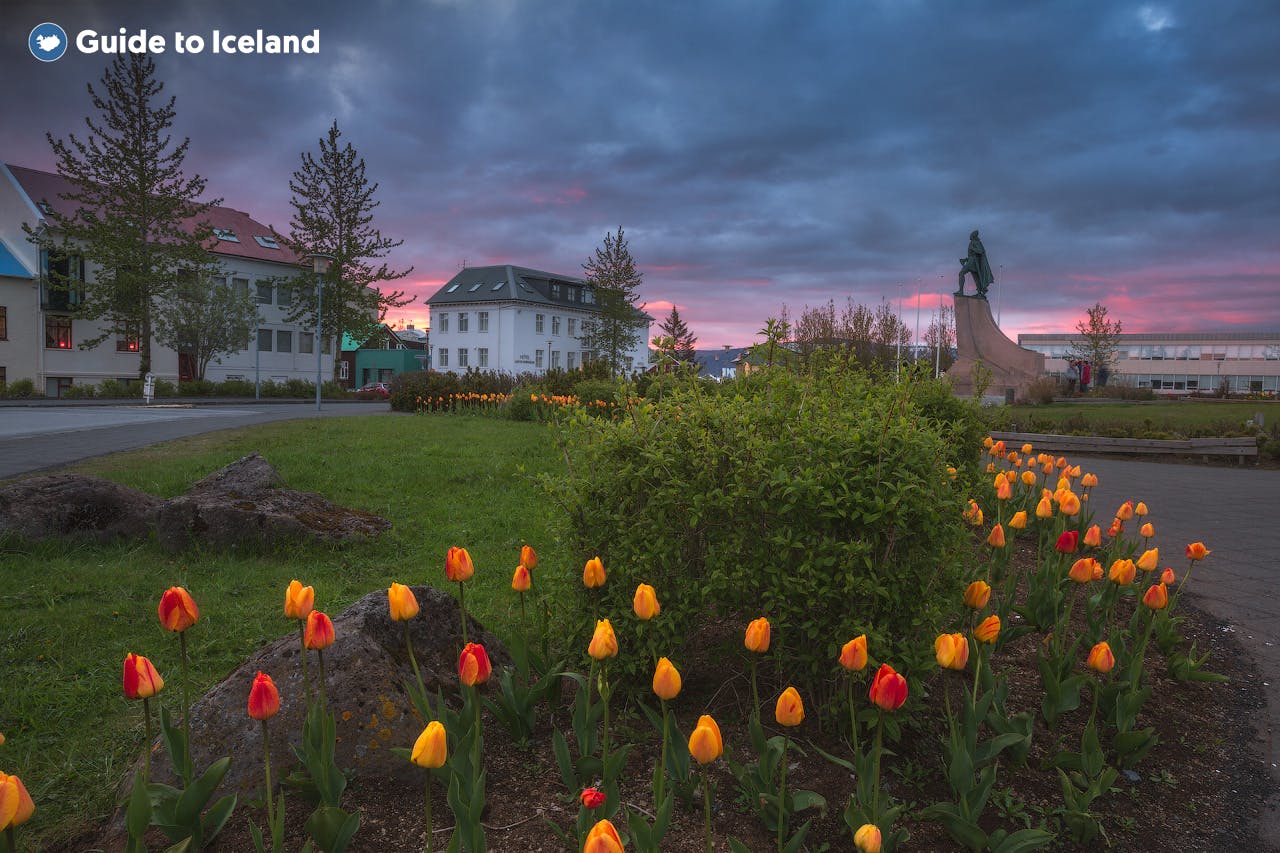 Your five-day adventure in Iceland will start as soon as you touch down at Keflavik International Airport. The first order of business is to pick up the vehicle which will take you around this beautiful country.

On your way to Iceland's capital city of Reykjavik, you could choose to make a stop at the Blue Lagoon. This world-renowned spa is known for its healing waters, vivid azure colors, and luxurious treatments. It is located in the middle of a moss-covered lava field, giving it an otherworldly atmosphere. If you add the Blue Lagoon, it will be arranged according to your flights. If there is no time to visit the lagoon today, it can be added to another day. Your travel consultant will be able to arrange this for you. There is still plenty to see and do in Reykjavik and the Reykjanes Peninsula if you have extra free time.

Once you've had your fill of luxuriating in the Blue Lagoon, you'll head to Reykjavík city, which is a half-hour drive away. It's time to rest up for the exciting journey ahead. Your accommodation for the first night will be in Reykjavik. 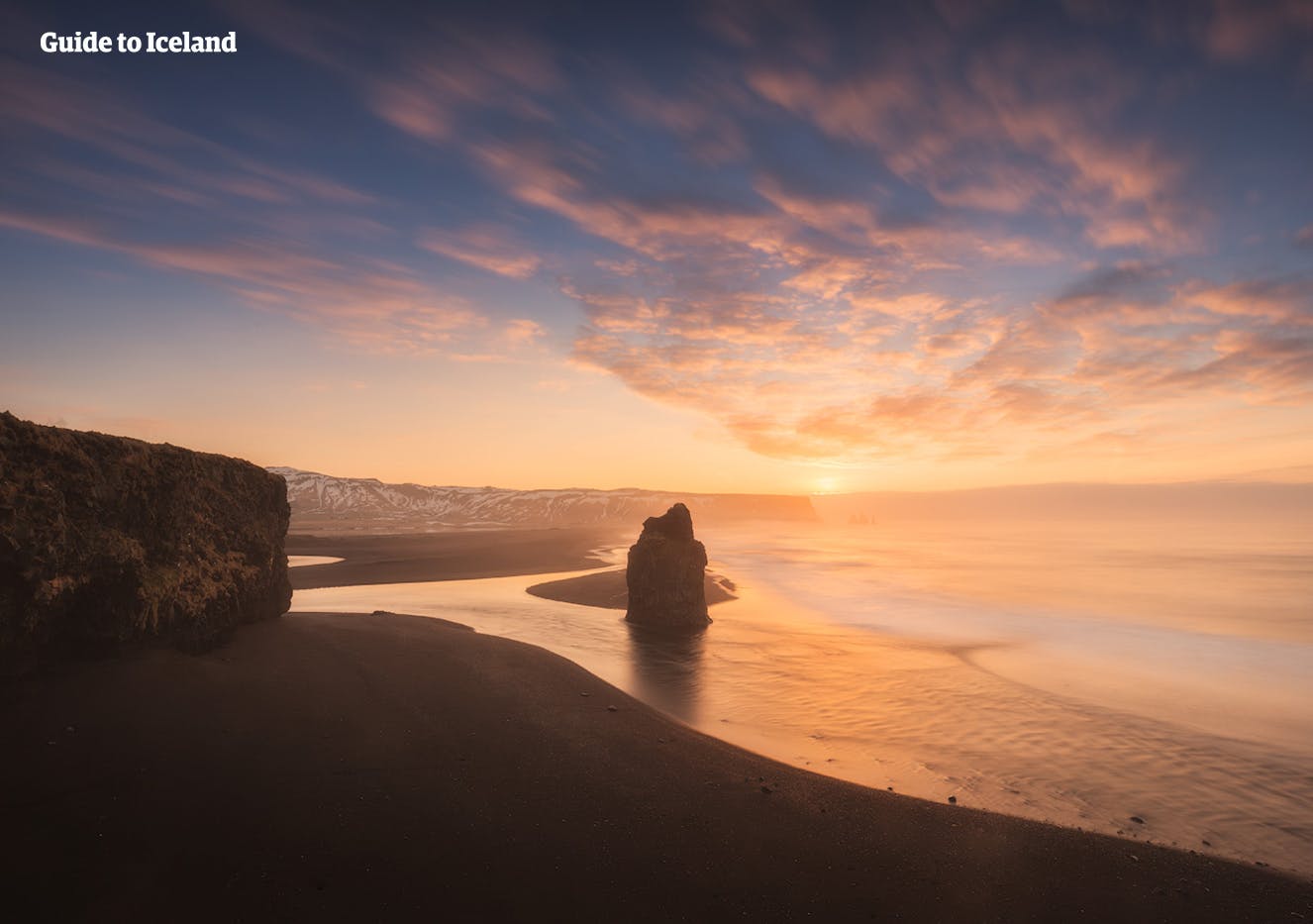 Rise and shine, it's your first full day in Iceland, and there's so much to see. You'll be driving from your accommodation in Reykjavik city, down the gorgeous South Coast of Iceland, and seeing sights along the way. Your journey starts with visits to two of Iceland's many beautiful waterfalls.

Seljalandsfoss waterfall is first on the schedule. The waterfall stands at 197 ft (60 m) tall, and behind it is an alcove carved into the rock, which allows those who don't mind a bit of water spray to walk around the waterfall. The next waterfall is Skogafoss, similar to Seljalandsfoss in height but much wider and therefore more majestic. A rainbow can be seen in the mist that the dropping water creates if the sun is out.

After you admire the two waterfalls, you will drive to Reynisfjara Black Sand Beach. Most of Iceland's beaches are black, and Reynisfjara is perhaps the most stunning of them all. On the beach sit the Reynisdrangar Sea Stacks, impressive rock formations which, according to folklore, are petrified trolls. Whether you believe the sea stacks to be trolls or not, they are home to many seabirds, which you'll likely be able to spot.

Not far from the black sand beach is the village Vik i Myrdal, your next stop. Vik is an adorable town with beautiful surrounding landscapes. You'll be able to stretch your legs on a walk around the village and maybe take a look inside a shop or have a bite to eat in a café.

You have the option to select exciting extra activities on this day. There are three icy adventures you can pick from. One option is to explore the beauty of Solheimajokull Glacier on foot with a glacier hike. If you prefer traveling faster than your own two feet can carry you, the best option for you is to hop on a snowmobile and take a tour on Myrdalsjokull Glacier. Or you can truly immerse yourself in the ice with the Katla Ice Cave Tour.

At the end of your day, you'll backtrack a little bit and spend the night near the small town of Selfoss. 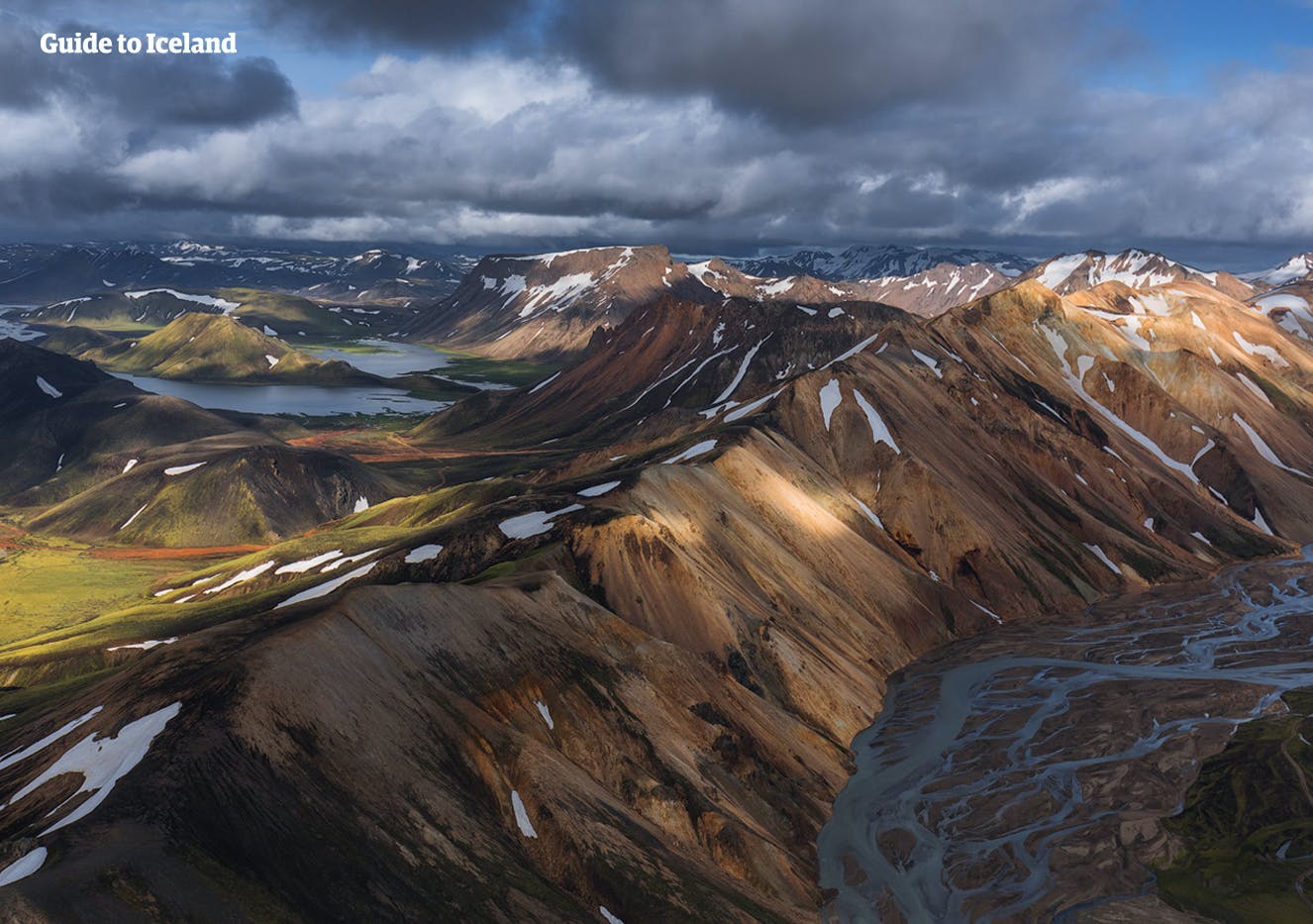 Today, you will drive from Selfoss to the Landmannalaugar area, a part of the Fjallabak Nature Reserve in the highlands of Iceland. You've got quite a bit of ground to cover on this day, so we recommend getting an early start. The early bird gets the worm and more time to stop and admire the scenery.

You will have plenty of time to explore the Landmannalaugar area, a truly remarkable section of the nature reserve in the Icelandic Highlands. You will be surrounded by otherworldly landscapes since the mountains all around are a broad scope of splendid colors.

The area is full of geothermal hot springs, many of which are safe for bathing in, so bring your swimsuit. Even if you don't take a dip, the steam rising out of the ground and the natural puddles bubbling is a peculiar and memorable sight. 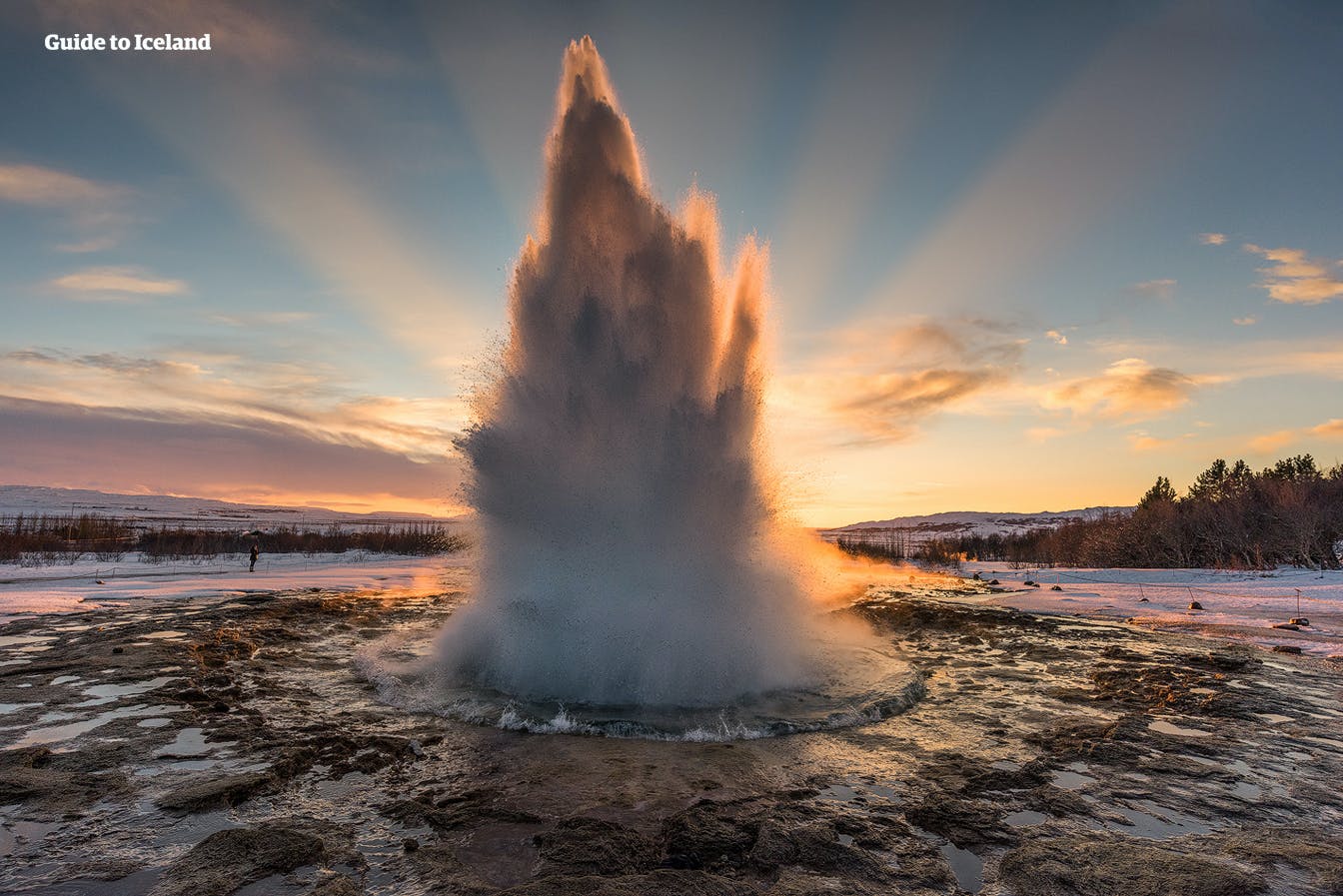 Day 4 - The Golden Circle and Kaldidalur

Your day will start with a staple of sightseeing in Iceland, The Golden Circle. You'll see three of the country's most famous attractions in one day. This is another day with lots to see, so remember to get an early start if you want plenty of time at each stop.

The first stop is Geysir Hot Spring, which is the geyser all geysers derive their name from. Even more excitingly, you'll get to see Geysir's next-door neighbor Strokkur, a much more reliable hot spring that lets out a fountain of hot water every few minutes. You'll want to bring a camera to capture the jets of water shooting up in the air.

Next, you'll witness the power of Gullfoss waterfall, a 105 ft (32 m) tall structure on two levels with glacial water rushing forward and down in a breathtaking display of nature's potential. The waterfall has been photographed from every possible angle, but nothing beats walking close to the actual thing and hearing the thundering rush of the water.

Closing the circle is Thingvellir National Park, which is a cultural and natural treasure. It is known for having been the meeting point for the Icelandic parliament, Althingi, until the 18 hundreds. It is also known for the Almannagja Gorge, which sits on the rift between the North American and Eurasian tectonic plates.

After you finish the Golden circle, you'll drive through Kaldidalur Valley to Reykholt. Kaldidalur Valley is an old passage across the Icelandic Highlands used to get to Althingi in Thingvellir for the parliament meetings.

The village of Reykholt is a historical site that was once the home of Snorri Sturluson, a 12th-century writer, historian, and law speaker. For many years the most important school in the country was situated at Reykholt.

Today you will again have the chance to add exciting extra activities. The options available are a nice riding tour on the unique Icelandic horse, A thrilling snowmobile tour on Langjokull Glacier, or a fascinating snorkeling tour in Silfra Fissure. All of the tours offer unique ways of exploring Iceland's landscapes.

Towards the end of the day, you will drive to Reykjavik. If you get there early, you can walk around the city streets and enjoy the city's vibrant life.

On the last night, your accommodation will be in Iceland's capital city Reykjavik. 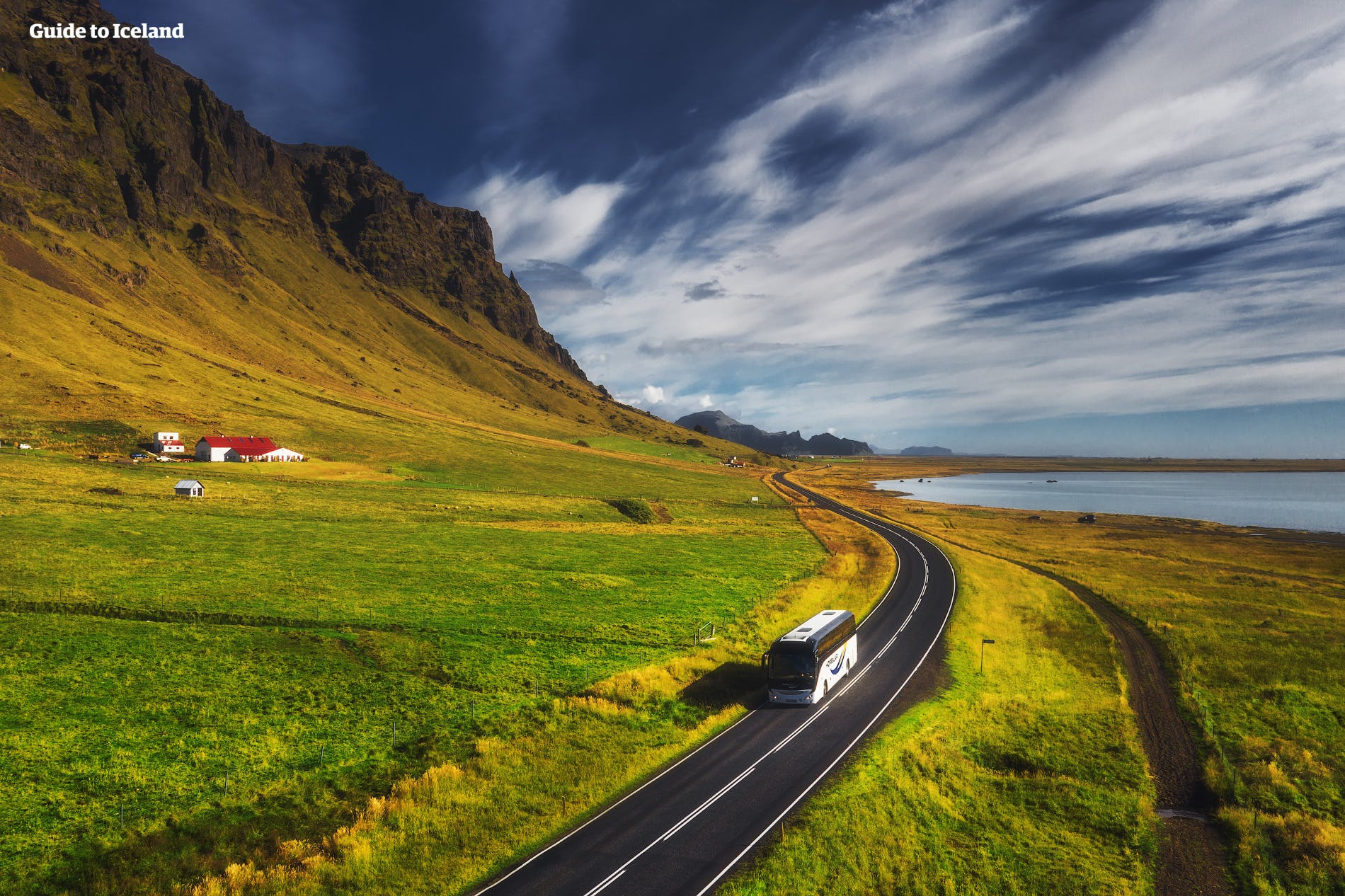 Your last day in Iceland has arrived, all too soon. You'll be leaving with an abundance of good memories and perhaps a souvenir or two.

For those who have a later flight and choose to visit the Blue Lagoon today, you will finish off your stay unwinding before you head to the airport. This is the perfect place to relax as you bathe in the warm, mineral-rich waters as you look back on the incredible adventure you have just taken in the land of fire and ice. If your flight is later, there are plenty of things to do in Reykjavik. If you have an early flight back home, we wish you a pleasant journey.

Self-drive tours begin either in Reykjavík City or at Keflavik International Airport. A valid driver's license is required, along with a one-year-long on-road experience. Please be aware that your itinerary may be rearranged to better fit with your arrival date and time.

Some optional activities might require you to have a valid driver's license, or you might need to send additional information to your travel planner. Please note that you might need to present medical documents should you choose to go snorkeling.

All levels are 4-wheel-drive vehicles. The Icelandic highlands are only accessible by 4×4 jeeps, as required by the Icelandic law.

All levels come equipped with a GPS and free Wi-fi. You can enjoy unlimited data with the Wi-Fi device, which can be connected to up to 10 devices at once. The car rental will provide 24-hour roadside emergency services.

A large 9-seater van such as a Mercedes Benz Vito (4WD manual, has highland capabilities), or similar. Comfortable for 5 to 7 travelers. If seated full, luggage space is limited. The driver must be of 23 years of age or above.